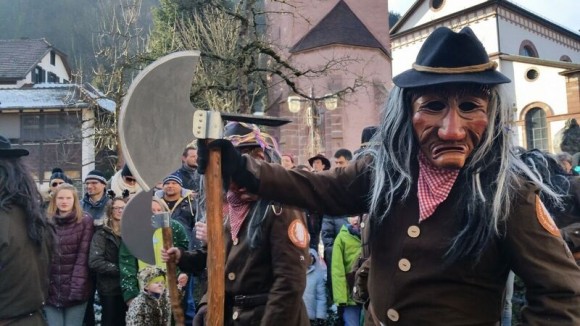 Coming down from the highs of the winter holidays can leave you a bit gloomy. For a month we toasted Gluhwein mugs at Christmas markets, had a long Christmas week, and then a week later lit up the skies with wild fireworks. If you can luckily get through dull January, in Germany you can look forward to the very boisterous Fasching! After having such an incredible experience last year, I recommend you to attend Schramberg’s Fasching 2016 this  February 7. 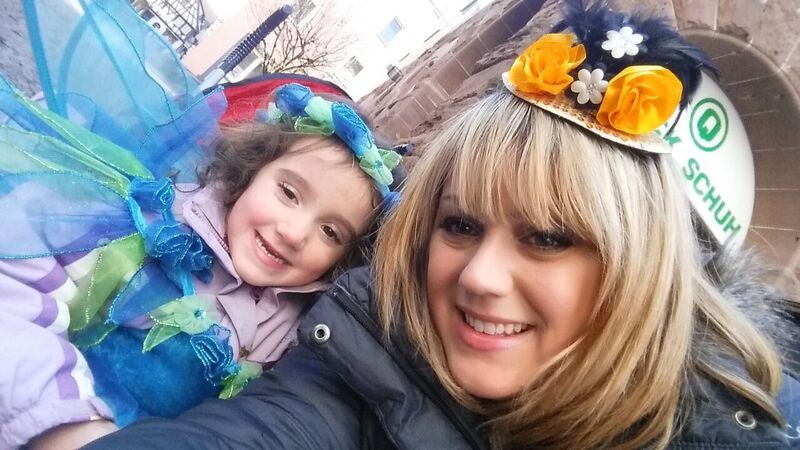 When living in the United States, the only pre-Lent celebration I attended was New Orleans’ Mardi Gras. Then after moving to Wiesbaden, I learned about dressing like cowboys, clowns, animals and other silly costumes while catching candy from vibrant parade floats. However, going to this festive event in Schramberg was a totally different and awesome experience!

Located in the Swabian-Alemannic area of Germany, the town of Schramberg calls this colorful celebration “Fastnacht.” This word comes from the old German word ‘fasen’ which means to me be foolish, wild or silly.

In order to get there before the festivities began, last year our day started early in the morning on the road. Once arriving, we found plenty of parking in the outskirts of town as the Altstadt (Old Town) was blocked off for Fastnacht. When walking around, to my surprise we learned about the town’s first event of the day called ‘Da-Bach-Na-Fahrt’. 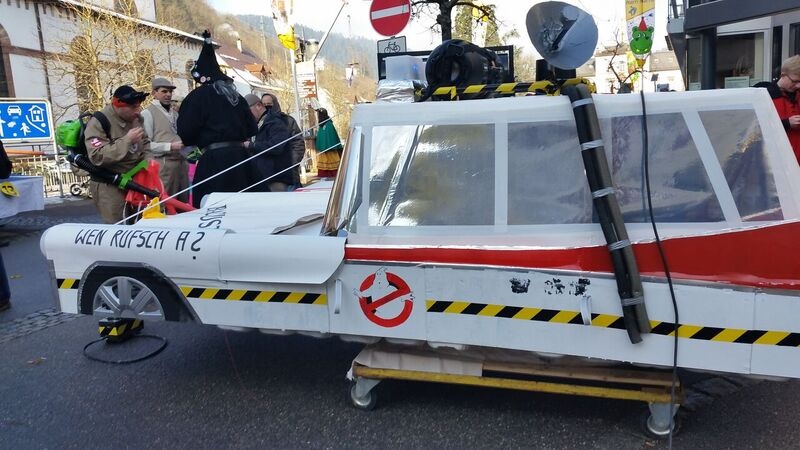 For Da-Bach-Na-Fahrt participants build their own rafts for a hysterical but highly competitive boat race! Each year there are 40 decorated rafts that strive to make the 500 meter river course. On display before the event began, fest goers could walk around and check out the creative rafts. You can tell so much time and work had gone into making them. There were clever creations from Star Wars to Barbie to Never-ending Story! 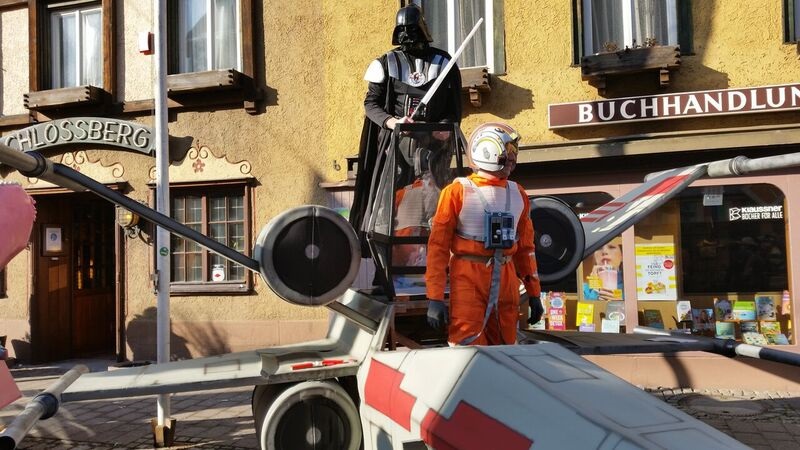 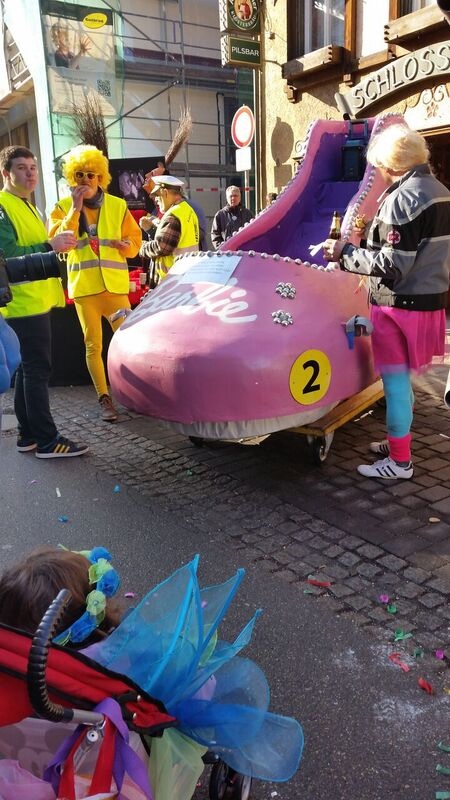 With people packed along the river to watch the race, the floats made their way up the river. The lucky people were the ones who could get a spot right on the river. 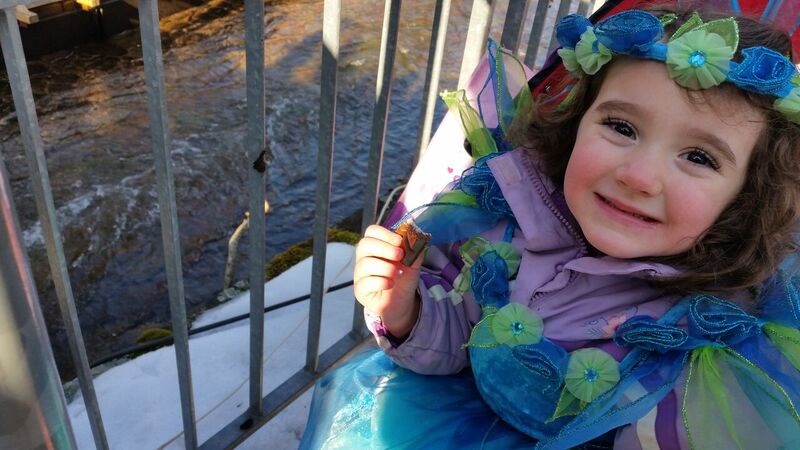 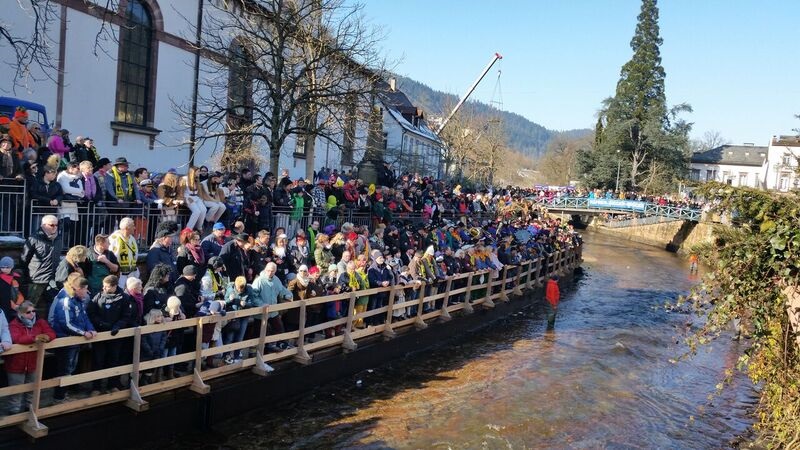 Then they were off! The floats zipped passed us as we stood right at an area after a small waterfall! Not making the rough waters after a small decline, sometimes the floats fell apart. Burr! It was a cold day and the water must have been freezing for them! 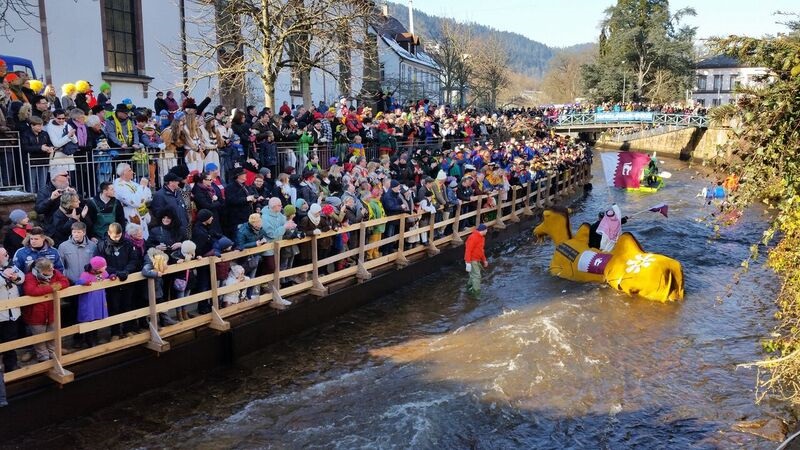 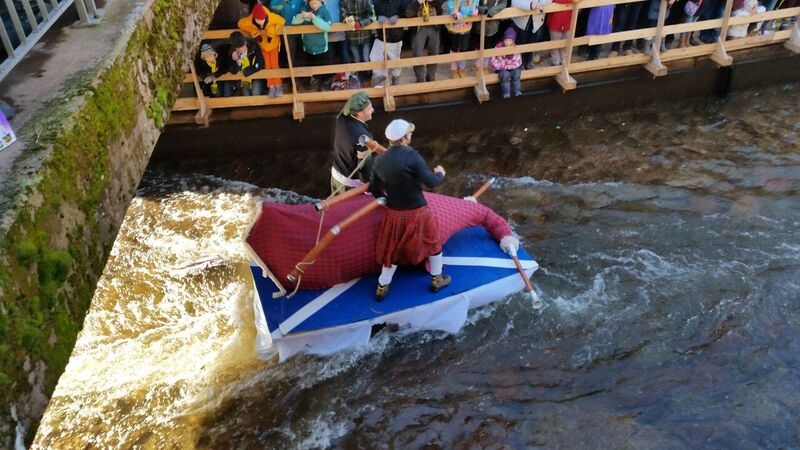 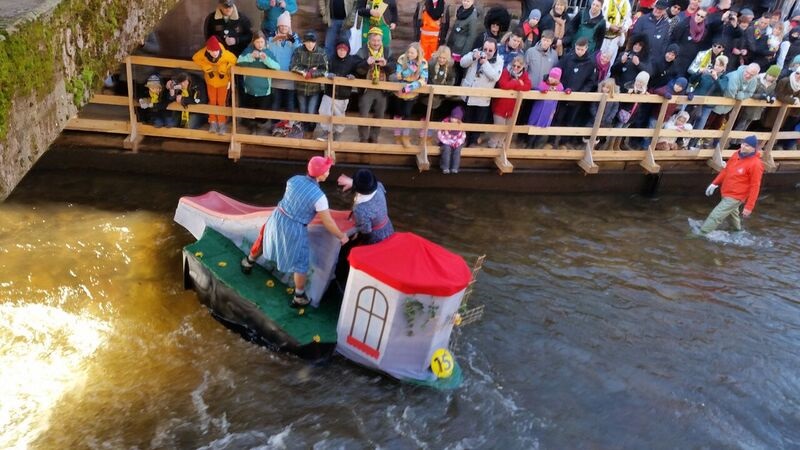 The race went on for quite a while, so I went and got yummy funnel cake at a vendor’s stand. 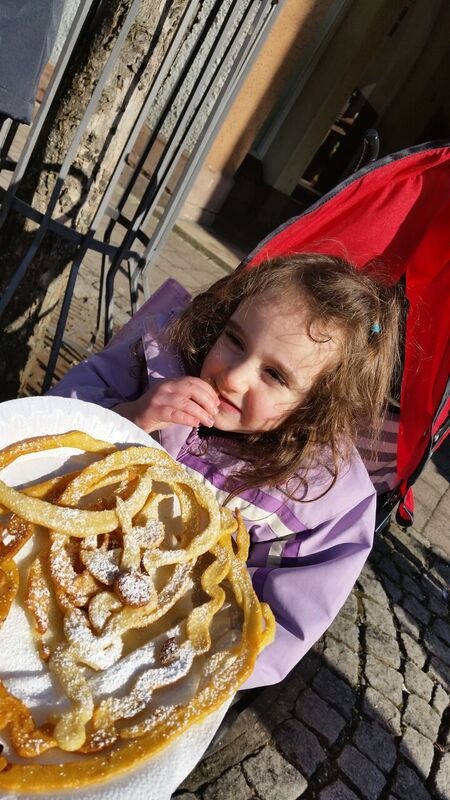 Right after the boat races, we went to find a spot to stand and watch the parade. As a seasoned veteran of going every year as a child to the Macy’s Thanksgiving Day Parade, I know the best spot to find is in front of a tree or a sign post so nobody can push up on you from behind when the parade starts.

The street parade started out like any other parade with floats, confetti and bands. 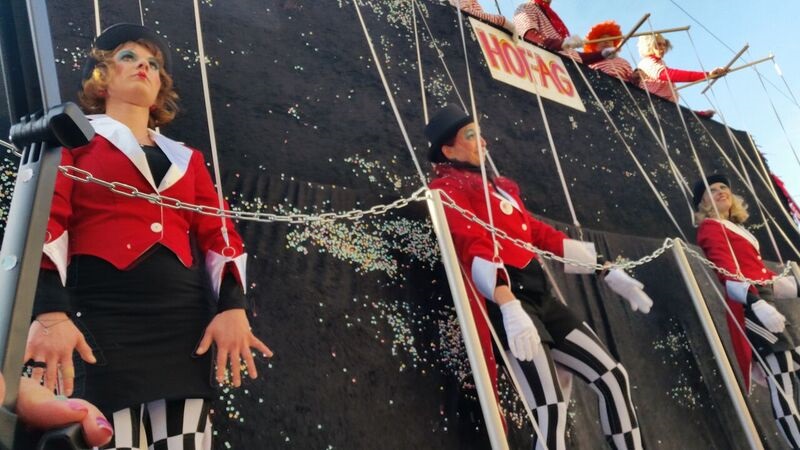 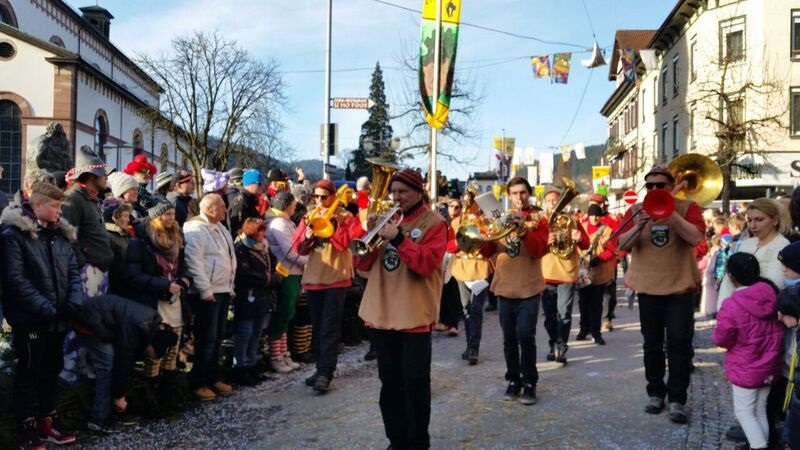 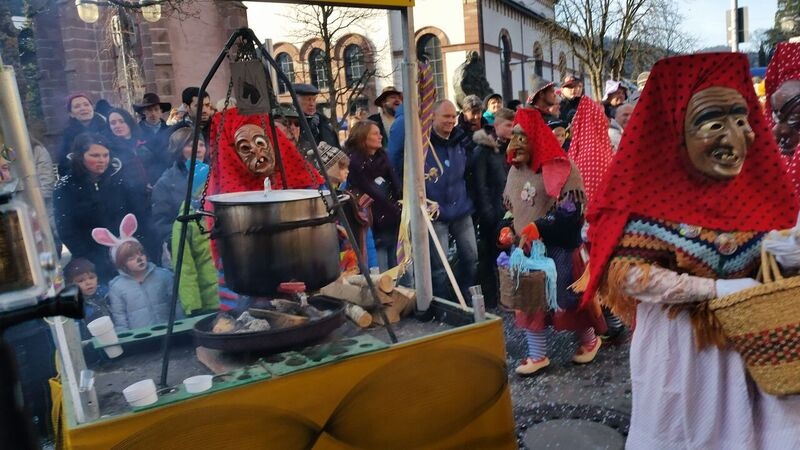 While you had to work for your candy most of the time, the people of the parade were very interactive with the crowd. As the fest-goers would yell “Hexe!” (Witch), the parade participants would go and get right in the fest-goers’ face as they kept screaming at them. 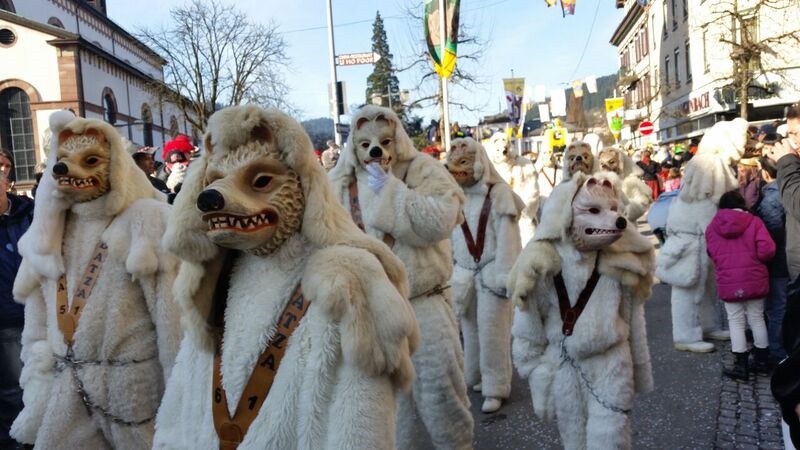 Groups of the masked witches were very mischievous as they would steal the hats or tie the shoelaces together of the teenagers. Teenage girls were also grabbed and thrown in the parade’s jail. The girls were let out a few minutes later down the parade route. 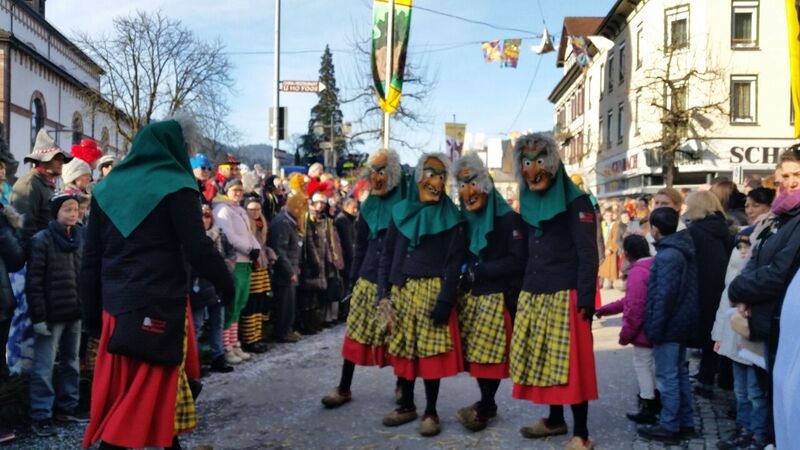 The cats would come by and rub their fur wands on you, then give you a piece of bread out of their baskets. (I know this sounds like something right out of Alice in Wonderland.)

Receiving a lot of attention, young kids were given candy directly rather than thrown at them like other parades. My daughter didn’t know what to make of the scary mask, but she liked the candy offer. 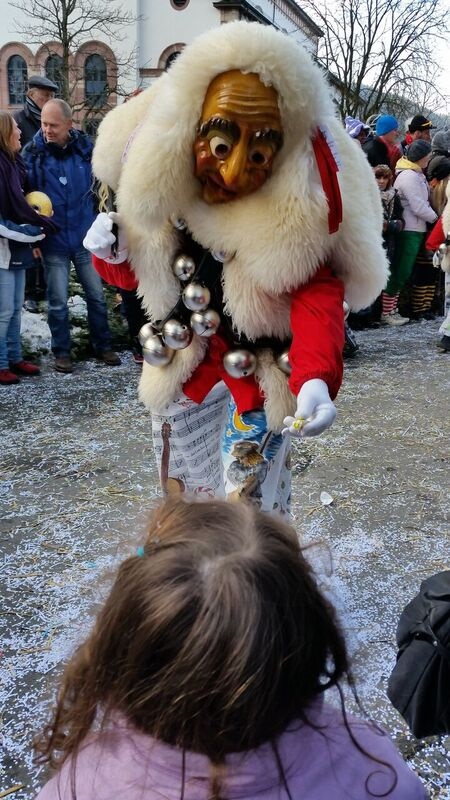 The most mischievous group of the parade came at the end and looked like black devils. This mischievous characters left the parade route, one sat on the food vendor’s roof and one actually went into someone’s house on the second floor! 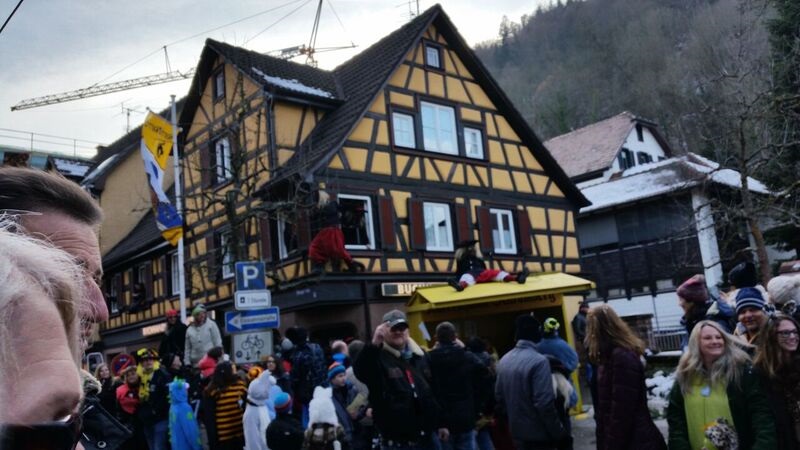 I will never forget the fun way the Swabian-Alemannic celebrates Fastnacht! To have a fun and totally different experience, head to Schramberg this February 7! 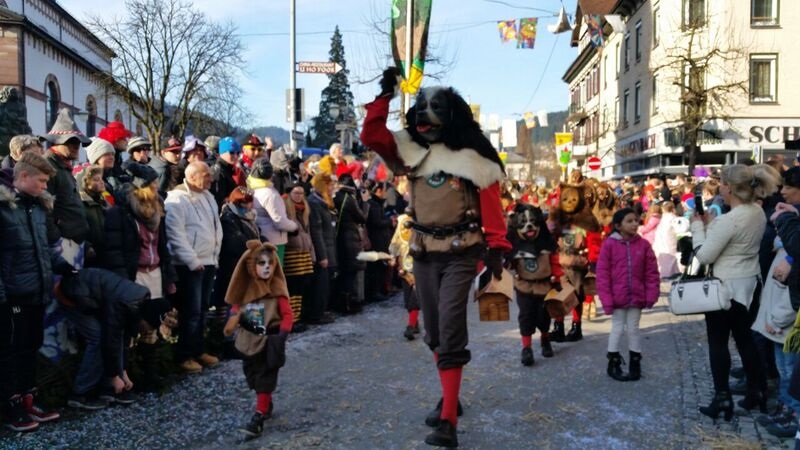