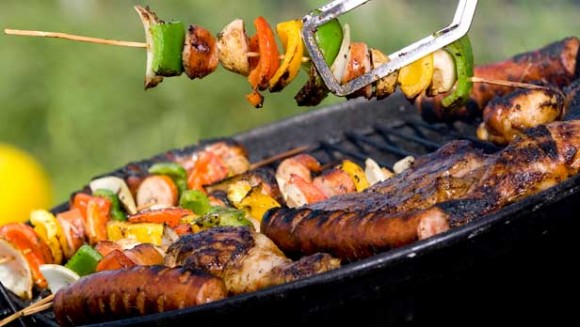 You can smell the differences between German and American cookouts on a warm summer day. Both cultures enjoy firing up their grills when the weather is nice but what’s on them, what’s served on the side and even what those grills look like is likely to be different.

What goes on the grill

Unlike Sabine Poth of Trier. Her idea of a barbecue is traditional German-style: “Kotelett, sausages, beer and salad,” she said.

Kotelett, which is a marinated pork chop, is a staple of German grilling culture. Along with bratwurst, it is as important to a German grill party as burgers are in the United States.

Pork is the most popular meat on German grills, according to the German Grillsportverein (grill sports association).

One reason for this is its affordability compared to beef but people also like the ease of preparation and the hearty taste that pork is known for.

Although bratwurst is popular with both cultures, the way it is eaten is slightly different.

While Americans have a variety of brats – plain, cheesy, spicy – German bratwurst mostly sticks to the basic mix of pork, beef and sometimes veal.

If Germans eat their brats on a bun, it is usually a Brotchen (dinner roll) from the bakery as opposed to a hot dog bun. Condiments are then limited to mustard and ketchup instead of relish, cheese or other add-ons.

Another typical German condiment is herbal butter, which can be homemade or store-bought. It is great for accompanying steaks, pork chops and bread. Apart from meat, Germans also like to grill fish. Grilled trout is very popular here.

To round out the meal, a German barbecue traditionally includes several salads, such as a pasta salad, potato salad and green salad.

Differences in types of BBQ’s

Another major difference between Germans and Americans at the grill is the grill itself.

Gas grills, like those primarily used in the U.S., are very expensive here and are having a hard time replacing the nostalgia that many Germans associate with a charcoal grill.

The GermanGrillsportverein calls charcoal “the only true grilling method,” albeit with a wink.

Gas grills have the advantage of being easier to start and regulate in heat output than charcoal grills. Charcoal grills need a minimum of 25 minutes to heat up, according to the Grillsportverein. Much of that time may be spent fanning the charcoal to spread the glow evenly.

Defenders of the charcoal grill proudly put in the time and effort, however, and, like Mrs. Poth, swear by the results. “The meat simply tastes better with charcoal,” she says.

A variation of the charcoal grill is a kettle barbecue, which looks like a globe on a tripod. The top half of the globe comes off as a lid, whereas the bottom half holds the actual grill. Those types of grills have become more popular in Germany in recent years. They allow for an indirect grilling method by placing a fluidfilled container underneath the grate and surrounding it with charcoal, then closing the lid and letting the hot air circulate. It’s like cooking in an oven, but adding the typical grill flavor.

If you decide to use a charcoal grill, don’t be tempted to use shortcuts in lighting it. The Grillsportverein recommends special grill lighting cubes or liquids that bear the seal of approval from the German TÜV, a hot air gun or a special lighting chimney. The association strongly cautions against the use of lighter fluid or other non-approved liquids.