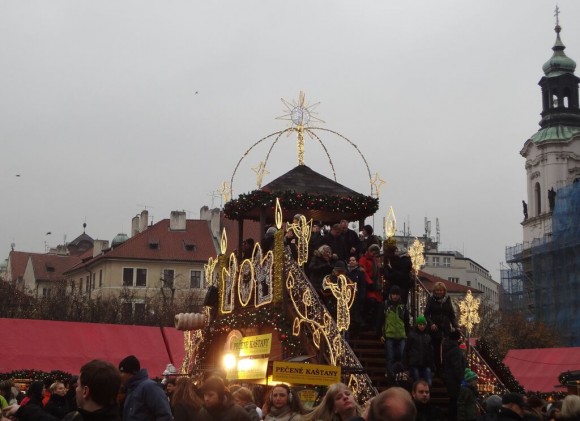 Christmas Market and More in Prague 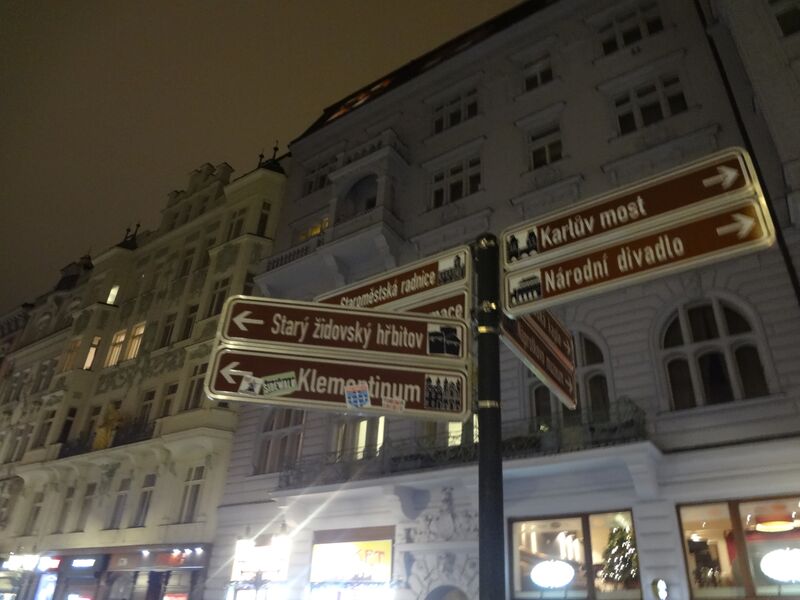 Three walking miles and four Gluhwein later….we found ourselves right in the center of the festivities! It was cold but not too cold. The town squares (Wenceslas and Old Town) were breathtaking. 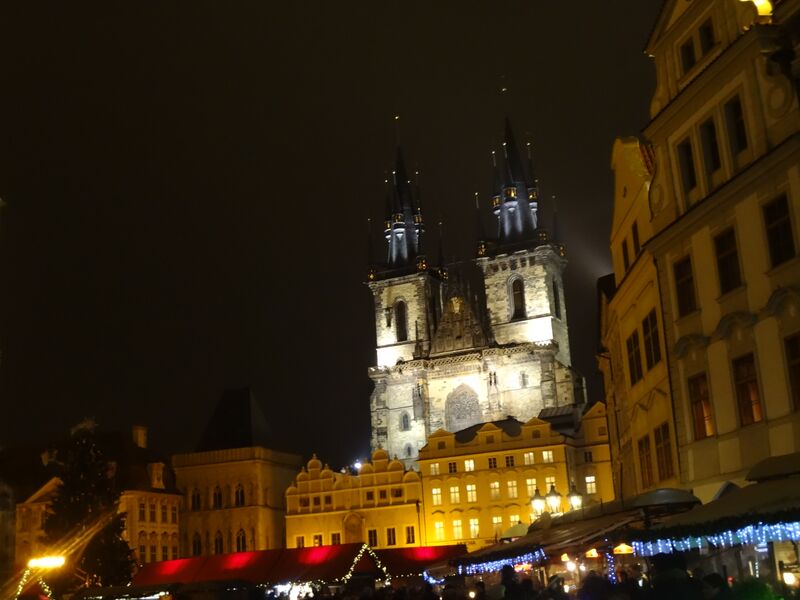 There was so much rich history and beautiful architecture to be seen. Our final destination for the evening was the Charles Bridge so that we could peek at the 30 or so statues displayed on the bridge and catch a glimpse of the Prague Castle. 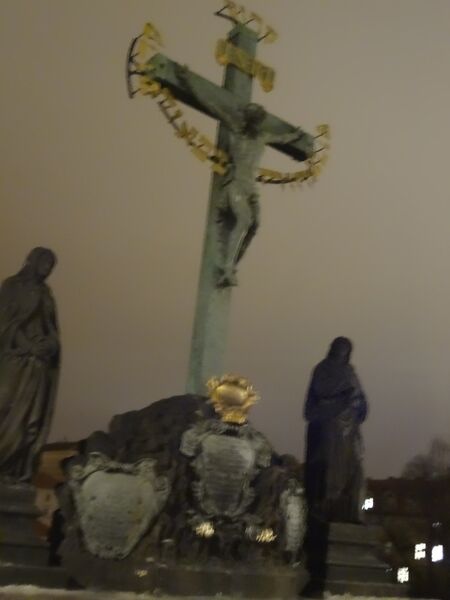 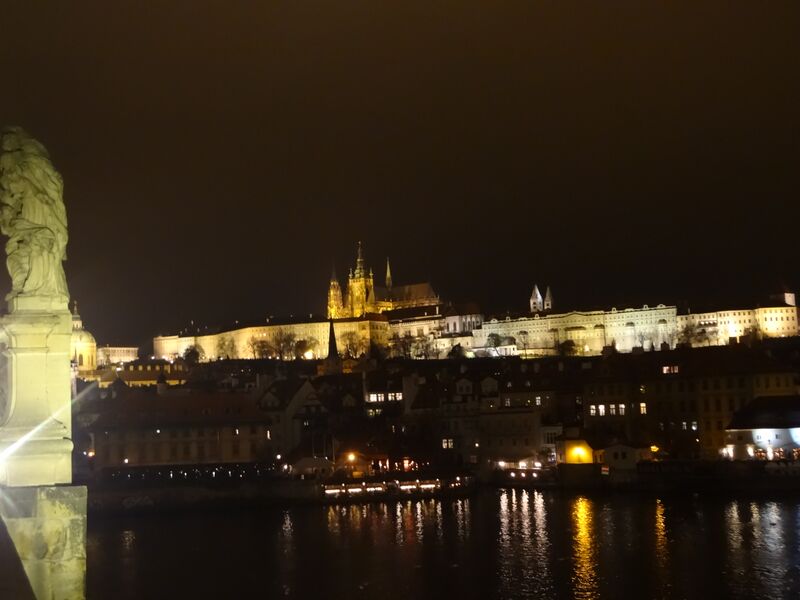 On our way back to find dinner, we made a brief stop in The Prague Wax Museum and saw some interesting characters… 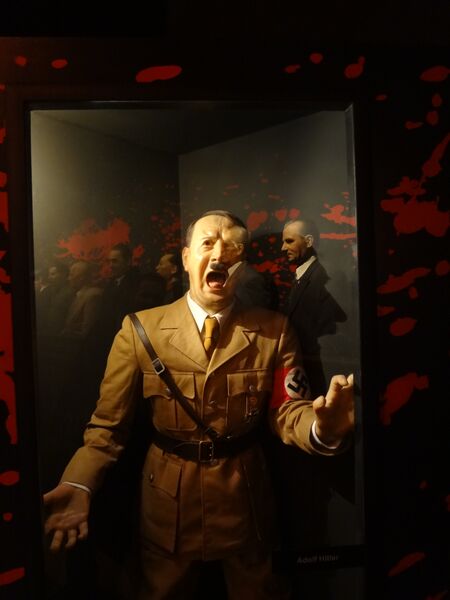 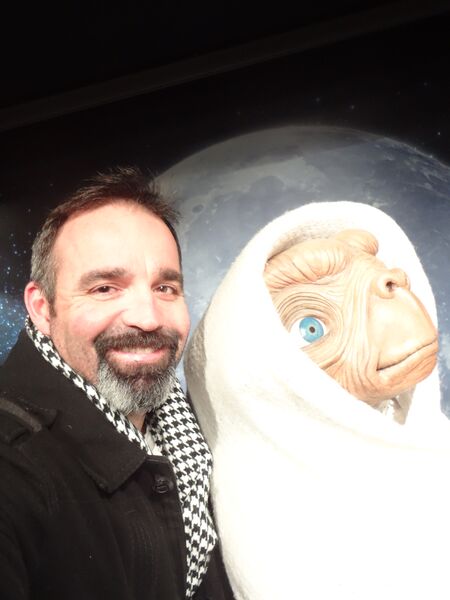 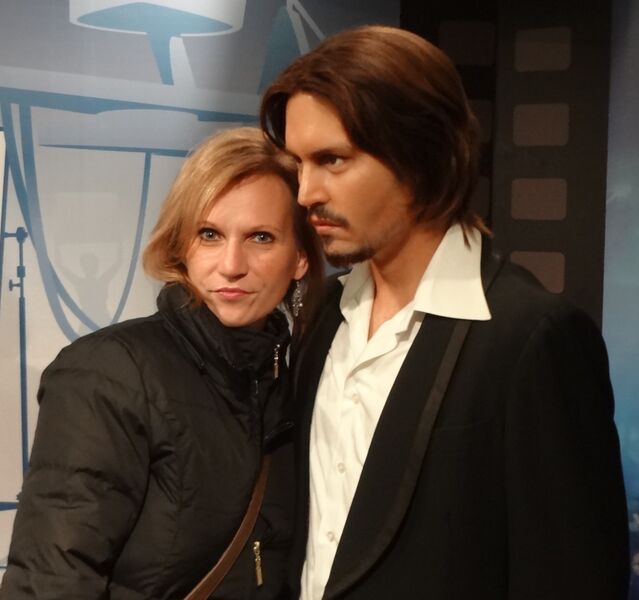 Dinner that first night in Prague was at the Medieval Tavern in Old Town. This was a 2 1/2 hours dinner show that is very popular. I actually purchased our dinner tickets online before we left Germany. It is literally a medieval-themed feast! 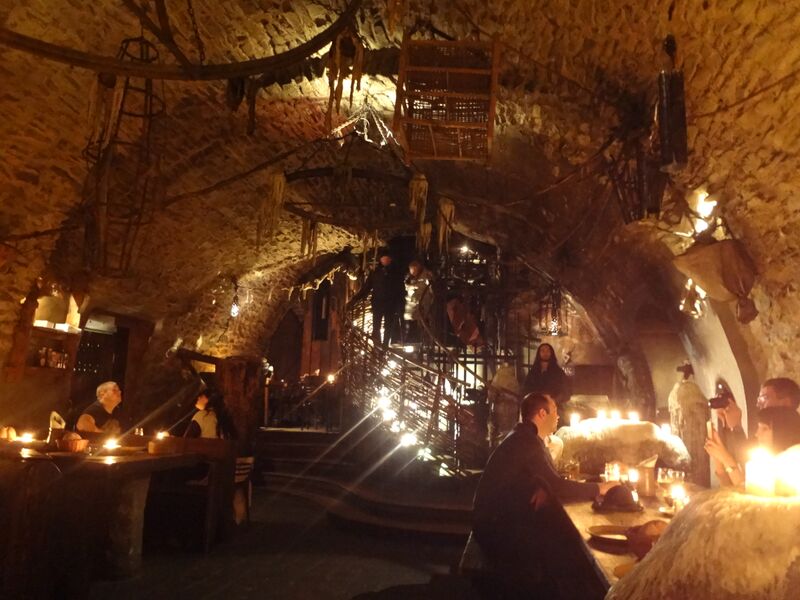 The sights and smells of the restaurant take you to a world hundreds of years ago. We were seated family style at a dark wooden table on chairs draped with rugs. The rooms are lit only by candlelight for this five-course dinner. Each course is served among the hustle and bustle of entertainers. The food was top notch and we could not take our eyes off the entertainment. 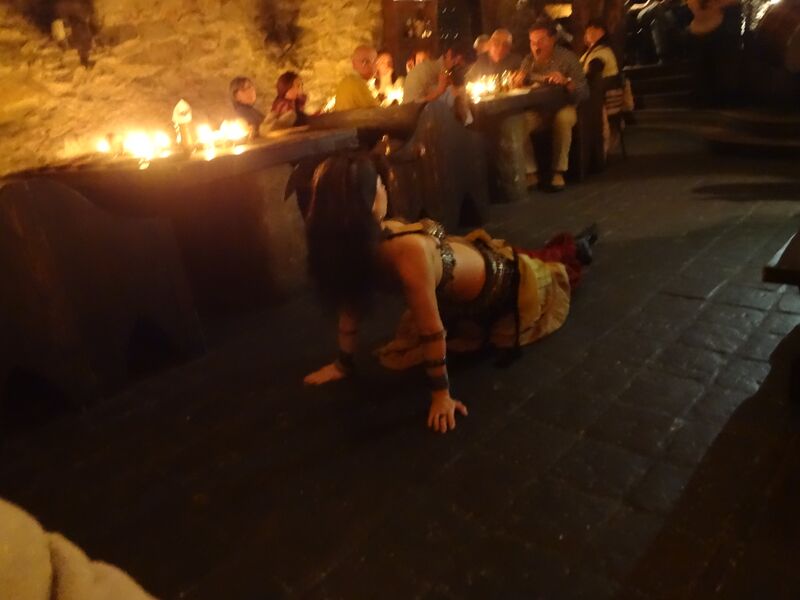 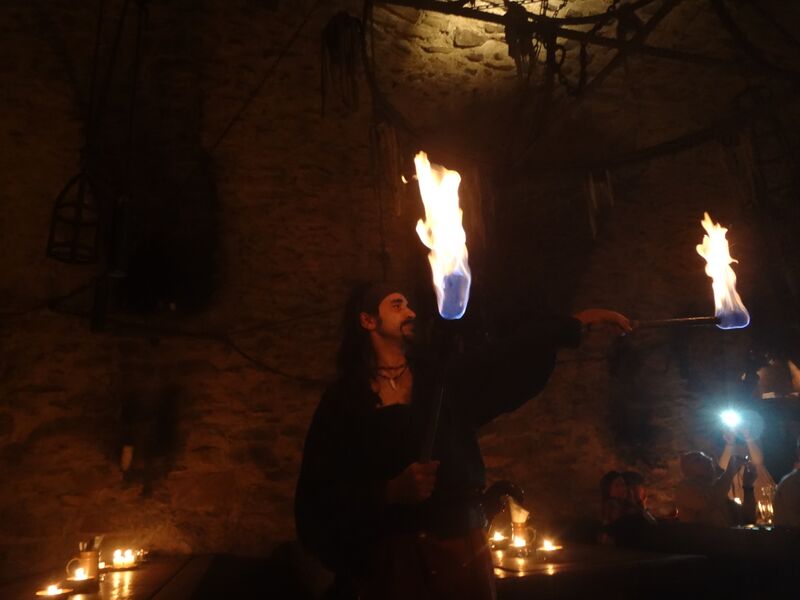 On to Day TWO…

One of the main attractions on my itinerary for Prague was to see the changing of the guard at the Prague Castle. This happens at noon each day. 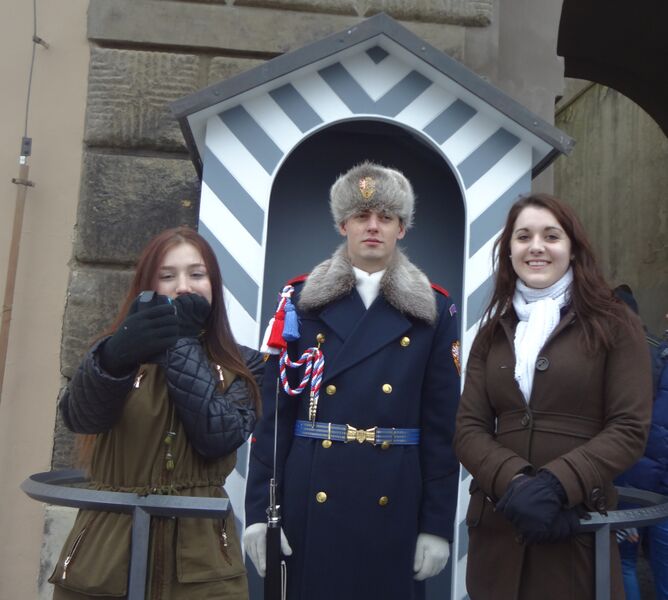 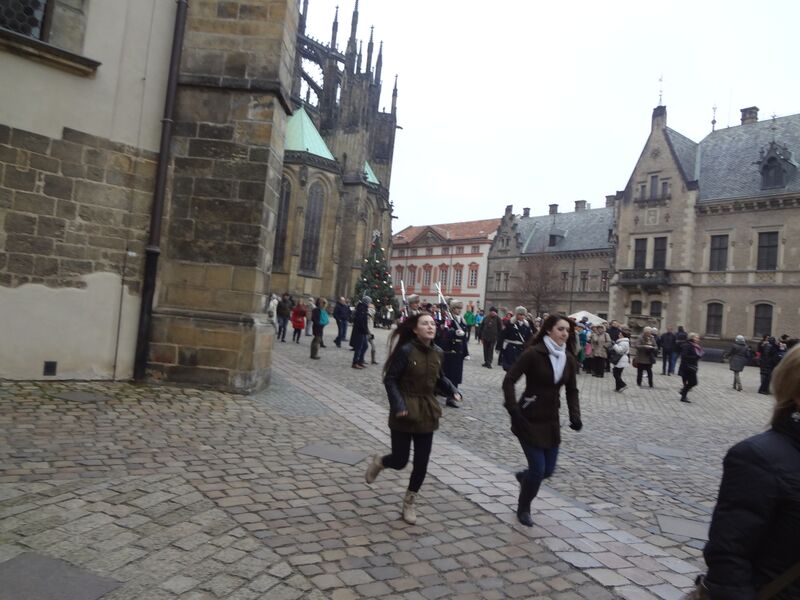 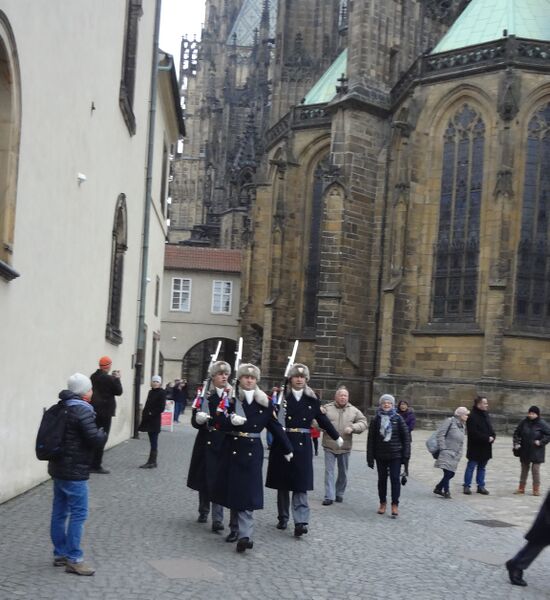 The Prague Castle is the largest ancient castle in the world (about the size of seven football fields). It was built and renovated during 13 centuries and the complex includes churches, gardens, alleyways and royal residences. It is the official residence and office of the President of the Czech Republic. In other words, it was BIG. 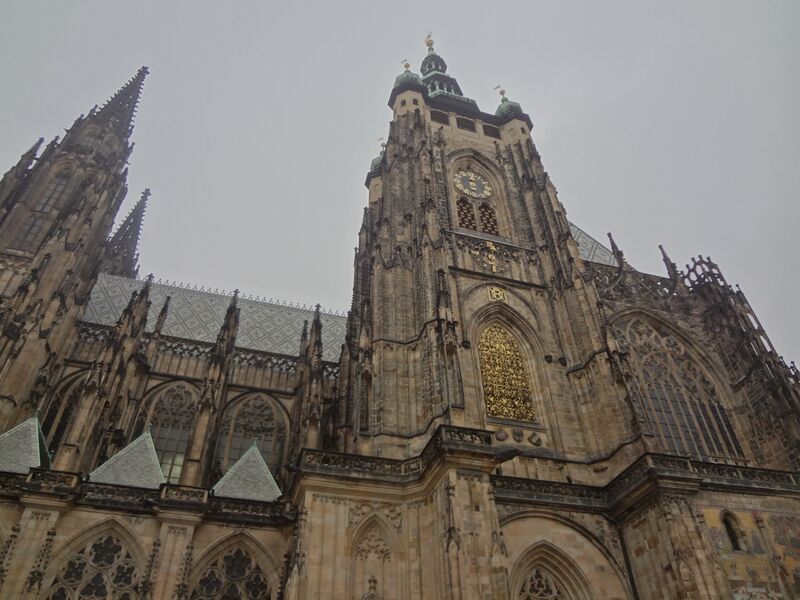 We spent the remainder of Day Two walking around the Christmas Market and enjoying some Gluhwein. We must have walked at least 10 miles on this trip! 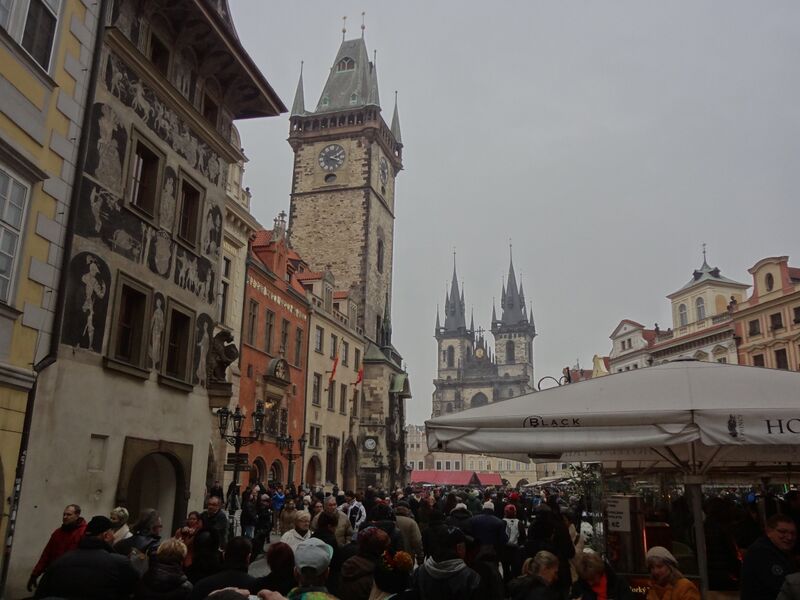 One of the biggest tourist attractions in Prague is the Astronomical Clock in Old Town Square. Every hour there is a fascinating mechanical performance, which in the Middle Ages was considered one of the wonders of the world. The clock for 600 years has been one of Prague’s greatest treasures.

At the top of every hour, figures on the sides of the clock become animated and two windows open to reveal 12 apostles greeting the city. On the sides of the clock are a skeleton ringing a bell, a Turk shaking his head, a miser with a purse full of money and Vanity looking in a mirror. This ends with the crowning of a golden rooster and the ringing of the very large bell at the top of the tower. It is said that at the first cockcrow in the morning the ghosts and devils flee from Prague. We just thought it was cool. 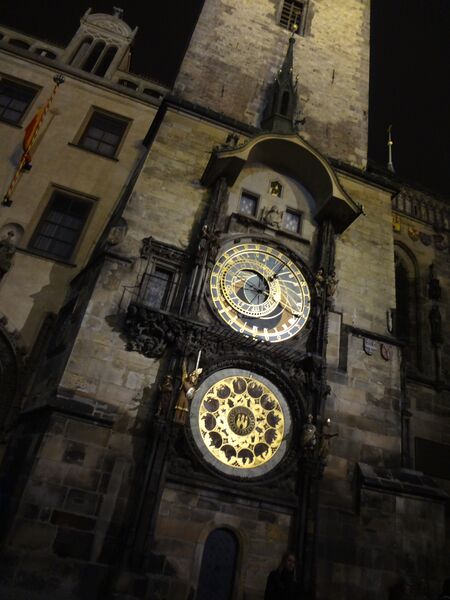 On our last day in Prague, we decided to make a quick stop at the “John Lennon Wall” on our way out of the city. So glad we did. The wall received its first decoration following John Lennon’s 1980 assassination, when an unnamed artist painted an image of the singer-songwriter along with some Beatles lyrics. It is located in a secluded square across from the French Embassy. 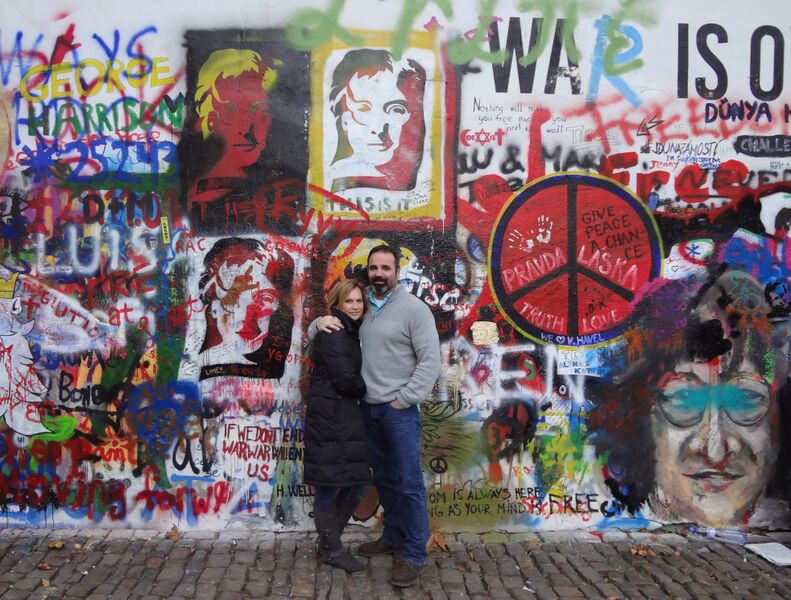 Because Western images and symbols were banned at that time in Czechoslovakia, the artwork was really a means of protest and was quickly covered by Prague’s secret police. The police, however, could never seem to conquer the steady stream of graffiti that the first artist unleashed.

The John Lennon Wall became known as a place for anti-communist political graffiti and it seemed that overnight guards and surveillance cameras could not prevent these calls to activism. To date, the wall continues to be painted white and then, almost as if overnight, artists gather, spray paint in hand, to begin decorating the landmark again. Another beautiful and exciting city checked off the bucket list! 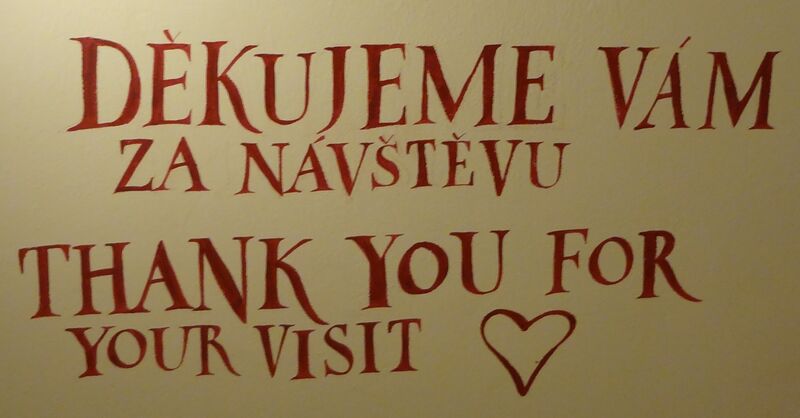 By car Prague is approximately a 6 hour drive east of Kaiserslautern, 5 hours and 30 minutes east of Wiesbaden and 5 hours northeast of Stuttgart.