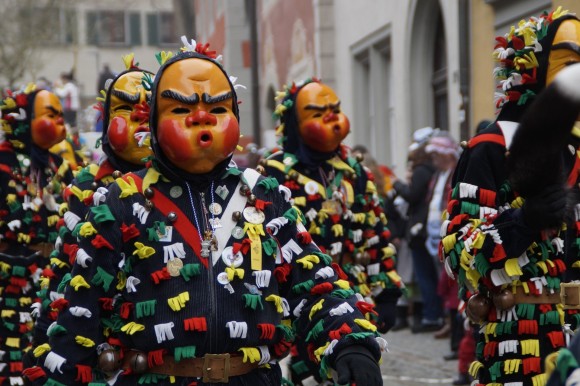 Everything You Need to Know about Carnival in Germany

Celebrated in February, Fasching is a traditional German celebration – also known as Karneval or Fastnacht. It is carnival season, which has been celebrated for centuries by people worldwide who have German heritage. It’s utterly bonkers and terrific fun – get involved!

Fasching can be documented back to pre-Roman times. These times were difficult for the average person, so the carnival season was a chance to be free, enjoy life and have some fun in a world where fun was non existent for many.

The masks and costumes of today date back to medieval times when they were not in place as fun decorations, but were worn as ways to avoid punishment and persecution, as carnival goers would mock the strict rulers of the day. Had they not used masks to disguise themselves they would have been caught and death would have been an inevitability.

Fasching is celebrated in all German-speaking countries. Its timing in the year is poignant, as it is just before the fasting season of Lent, which is when many people will forsake food as a sacrifice for religious reasons. Fasching allows a person to have a huge celebration, indulge, enjoy and embrace all that is good before things are out of bounds during Lent.

Germany is the country which holds the largest and most vibrant carnivals to celebrate the Fasching season, with nearly every city having its own celebration. The city of Cologne (Köln) probably holds one of the biggest carnival celebrations in the country.

Many places of work see this time as a public holiday, though it is not yet officially recognized as one. This means to have the time off, your boss needs to be a fan!

The ‘Woman’s Carnival’ which happens on the Thursday before Ash Wednesday, also known as Altweiber Fastnacht. This is a day when women can express their freedom and have a lot of fun. Tradition encourages ladies to cut men’s ties and place kisses on those they fancy. It is a flirty, fun event that many people look forward to every year!

Rosenmontag, or Rose Monday, is what comes next. This is a major highlight for many dancers, marching bands and float parades: streets are filled with entertainment for all.

These days, makes are more extravagant and more modern, and often include caricatures of the faces of politicians and other public figures. You will also be able to find fancy balls and other events that involve dance performances along with a dance floor to try your own luck during intermissions.

The celebrations come to an end on Ash Wednesday. But prior to this is the much sought-after Shrove Tuesday, or Fastnachtdienstag in German. This is another great opportunity to attend one of the costume balls that are held all over Germany. It’s also the day most German school children either have the day off or attend school in a costume (as Americans often do on Halloween).

Fasching is very much a time where everyone, and especially children, like to dress up in fancy dress to take part in the fun. You will notice all the German department stores around you will start promoting their fancy dress costumes ready for the parties and parades of fasching.

Narrenfufe is the collective name of the various Carnival greetings that people call out to each other in the street during carnival season. Each city/region/village tends to have its own so its good to learn your local Narrenruf in order to join the fun and be careful of using the wrong one as people can get very patriotic around that time of year and you will soon become a traitor if you’re shouting Helau in Cologne.

Fasching Parades To Look For In The Future: