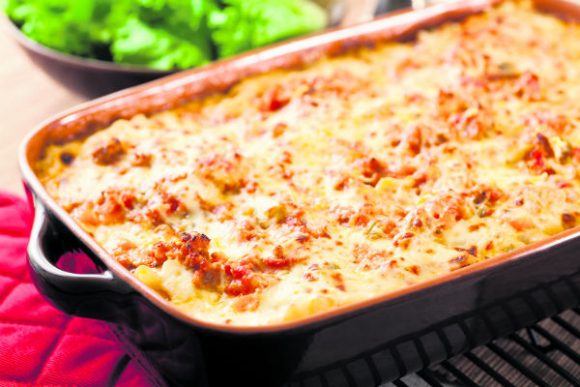 Today we will make a tasty casserole with cauliflower, noodles and ground meat.

First of all, cut the cauliflower in small pieces. Heat up water with salt, ground white pepper and some sugar. Also add a teaspoon of butter and a sip of lemon juice. When the water is boiling, put the caulifl ower in it and cook it until it is almost done. Put the cauliflower in ice water to stop the cooking process.

After cooling it down, put the cold caulifl ower in a strainer to dry it. Don’t waste the cauliflower water. We will use that next week for a delicious cauliflower cream soup. To preserve it, fi ll the water into a jar and let it cool down. Th en put it in the freezer to keep it fresh for next week.

Take a pan and heat it up. Put some oil in it to roast the ground meat. Cut a small onion in slim dices. Add the onion into the pan when the meat has roasted long enough to get dry again. Add salt and ground white pepper, and let everything roast for 10-15 more minutes.

Meanwhile we boil the noodles in salted water until they are almost done. Then put the noodles into a strainer and cool them down with cold water.

Now take your casserole dish, put a small piece of butter in it to prevent it from sticking.

Then put the cooked caulifl ower in the casserole, the noodles next and the ground meat on top of it. Scramble four eggs and a little jar of liquid cream with salt and white pepper. Pour it over all the ingredients. At last, put the grated cheese on top.

Your oven should be heated to 180 degrees celsius. Put the casserole in it for 40 to 50 minutes, until all the liquid disappears and there’s a nice cheesy crust on top.

If you like, you can serve it with a bit of lettuce, tomatoe and cucumber salad.