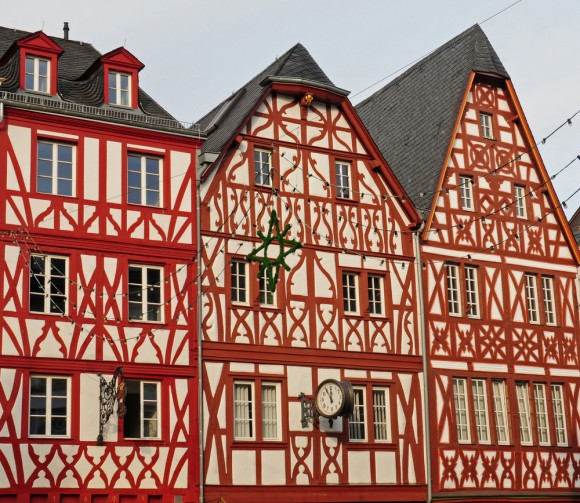 Stroll Through The Oldest City in Germany, Trier

Situated on the Moselle River and not far from Luxembourg lies the oldest city in Germany. Located between the vine covered hills of Rhineland-Palatinate, Trier is a  breathtaking, pedestrianized city with Roman ruins and is only 69 miles from Ramstein and 72 miles from Kaiserslautern.

Although known as the “Rome of the North”, Trier was founded around 2000 BC by Trebeta (an Assyrian prince) centuries before and independently of ancient Rome. It became part of the Roman Empire in the 1st century BC and one of its five largest cities by the 4th century. It once served as the key city of the Roman northern territories.

Thousands of tourists flock to this city for its well-preserved Roman and medieval buildings which are easily accessed in the walkable Altstadt (old town). There is also a special 35-minute tour of the Altstadt on Römer Express, a mini train for tourists. In fact many of Trier’s key sites have had UNESCO World Heritage status since 1986.

Here are a few of the historic highlights that you can expect when visiting Trier: 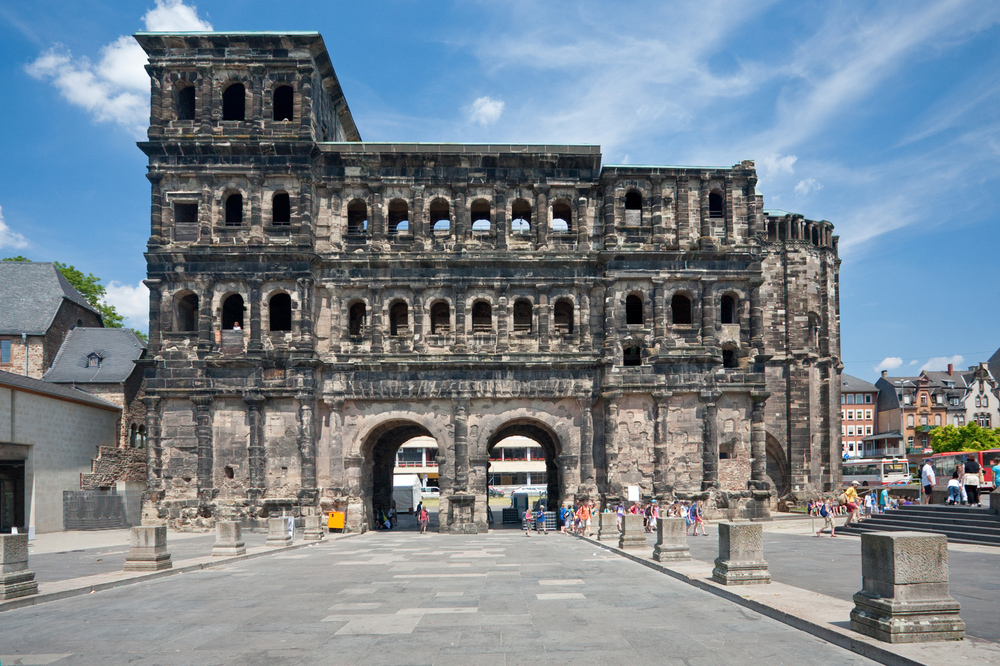 When first visiting Trier, the best place to begin your tour is at the Porta Nigra (Latin for black gate) which was erected by the Romans around A.D. 180. Originating in the Middle Ages, the Porta Nigra today is one of four city gates still standing and is the largest Roman city gate north of the Alps. The sandstone structure has survived through the years only because it later became a church, designated as part of the Roman Monuments, Cathedral of St. Peter and Church of Our Lady. Though today there is not much to see inside the Porta Nigra, visitors can see great views of the city once climbing up into the complex. During the summer, guided tours are conducted by an actor portraying a Roman army officer (centurion) in full armor. 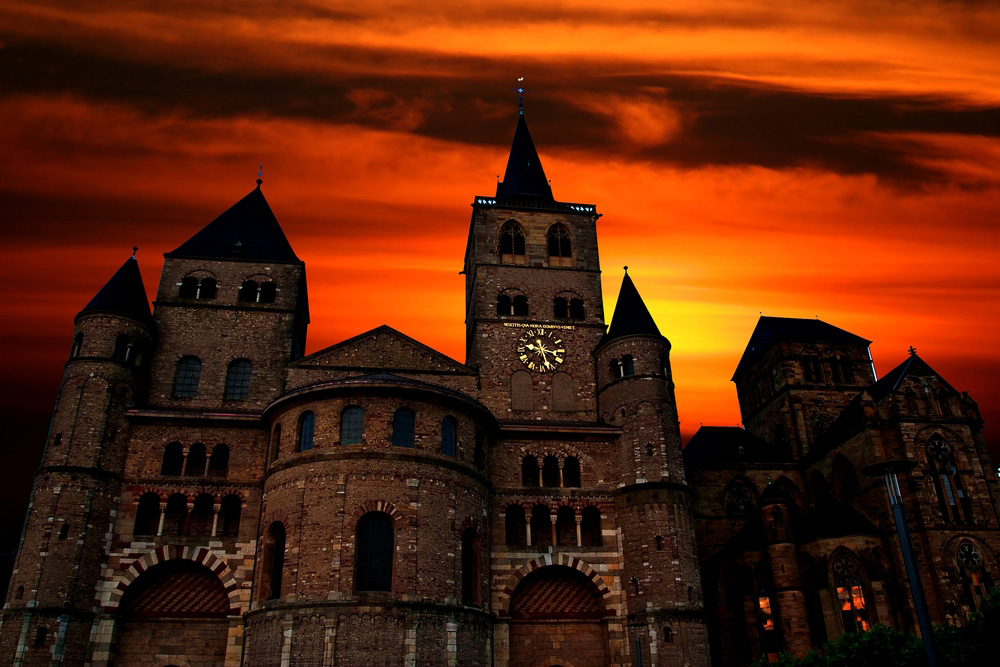 Destroyed and rebuilt many times, the Roman Catholic church dates back to Roman times. Now a UNESCO World Heritage site, the cathedral received its extensive restoration from 1960-1974 after the WWII bombing raids.

In Catholic tradition, the church is also said to be the home of the Holy Tunic, the robe Jesus wore when he died. Recorded back to the 12th century, the robe is irregularly exhibited only every few decades. Displayed in the Treasury is the Holy Nail, believed to be one that was used in the Crucifixion. As well at the cathedral is an impressive collection of artworks, architecture and holy relics such as the skull of St. Helena, the mother of Emperor Constantine.

The Church of Our Lady (Liebfrauenkirche)

Next to the Trier Cathedral is one of the most important early Gothic cathedrals in Germany. The Church of Our Lady was completed in 1235, replacing a roman double church on the same site. The church is built “in-the-round”, and there is a cross-shaped vaulting with four corresponding portals completed by eight rounded altar niches so that the floor plan resembles a twelve-petaled rose, a symbol of the Virgin Mary, and reminiscent of the twelve tribes of Israel and the Twelve Apostles. The apostles as well as the twelve articles of the Apostle’s Creed are painted on the twelve supporting columns, completely visible only from one spot marked by a black stone. The intriguing optics are matched by splendid acoustics. This church is also one of the UNESCO World Heritage sites.

Built by the emperor Constantine at the beginning of the 4th century, the Basilica is a Roman palace and is ranked a World Heritage Site. Though today it is used as an evangelical church, the basilica contains the largest extant hall from antiquity.

Built to express the magnificence and might of the emperor, the size of the elongated, rectangular brick building is quite impressive. With 220 feet long and 98 feet high, it is the largest surviving single room structure from Roman times. 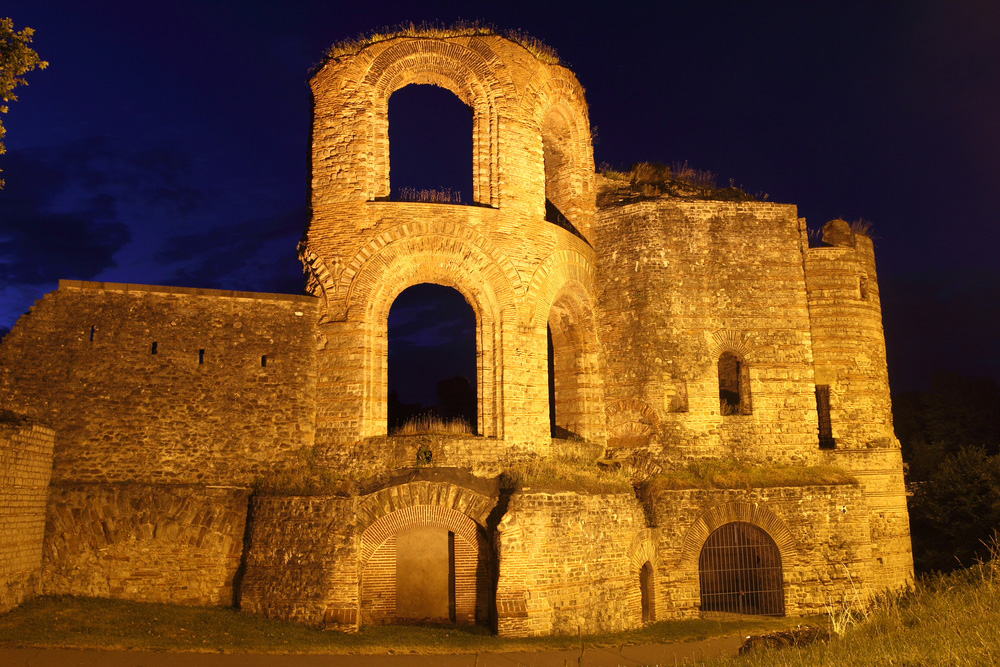 There are ruins of three Roman baths, including the Barbara Baths, which is the largest Roman baths north of the Alps. The Trier baths are also part of the UNESCO World Heritage sites.

During ancient Roman times, baths (thermos) were facilities for bathing. Most Roman cities had at least one bath house in the center that was used for bathing and socializing. The water came from an adjacent river or stream by an aqueduct. Then the water was heated by a log fire before channeled to into the hot bathing rooms.

The Barbara Baths were built in the second century. Though the largest baths in north of the Alps, the foundation and subterranean service, the pools and the heating system can be studied better in the other Trier baths.

Situated in the historic center, the beautiful marketplace became the focal point of Trier during the Medieval time. Built by Archbishop Henry I in the year 958, it served as the medieval city’s main market as the commodity sales and trading center. The market became the center of medieval Trier with the Steipe, the city council’s banqueting house, with access to the city’s St. Gangolf Church; the official city yardstick at the Steipe, the pillary (reconstructed), access to the Cathedral; access to the Jewish Quarter; as well as to six other streets.

With all the roads leading to the Hauptmarkt, this lively, colorful marketplace is a great place to access various other directions. Standing at the Petrusbrunnen fountain, the Porta Nigra is to the north, the Cathedral to the east, and the Mosel River to the west.

Trier is a beautiful city that is definitely worth visiting. Other attractions include the Roman Trier Amphitheater; Palace Garden; Rheinisches Landesmuseum – an archaelogical museum which exhibits regional Roman artifacts and artworks; Dreikönigenhaus – originally built in 1230 as a Romanesque tower house though it has undergone many changes through the centuries; the St. Matthias’ Abbey – still a in use monastery; the St. Gangolf Church; Saint Paulinus’ Church – one of the most important Baroque churches in the state; Karl-Marx House; and many more.

This magnificent city is also popular for river trips and cycling along the banks of the Moselle and Saar.