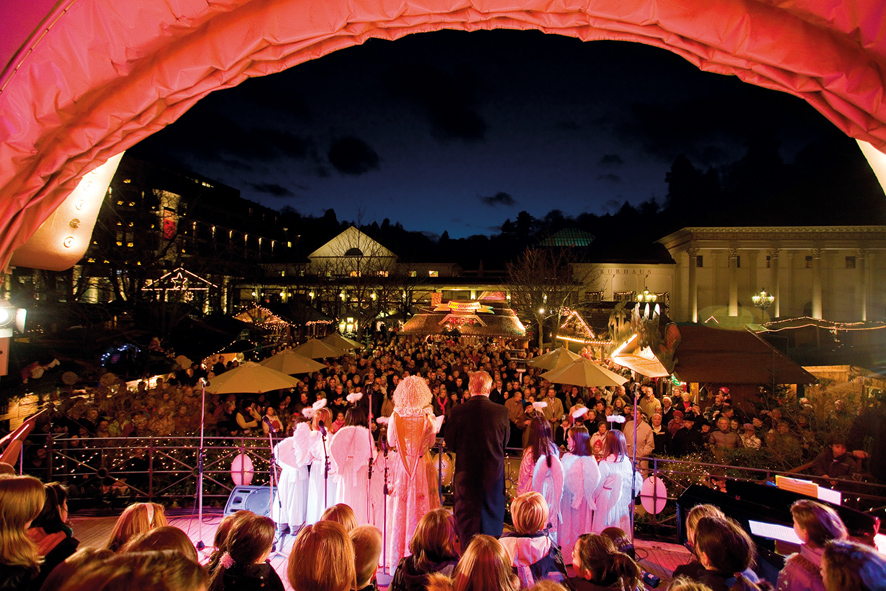 The internationally celebrated spa and festival city of Baden Baden will have a very special atmosphere in the period from 24 November until 30 December 2014 with its Christkindelsmarkt, against the commandingly picturesque backdrop of the Kurhaus and the Colonnades lit up by thousands of lights over the Advent period in the heart of the festively decorated old town.

In keeping with tradition the Christ Child will appear on the stage attended by numerous little angels for the ceremonial opening on 25 November and set the mood for visitors to Baden-Baden in the run-up to Christmas – entrancing both young and old with a very special winter’s tale – with the scent of
cinnamon, almonds and gingerbread. The Christkindelsmarkt is not only a welcome meeting point, but also a place to celebrate the pre-Christmas period where people can get together and enjoy a glass of glühwein or punch, roast chestnuts, seasonal biscuits and cakes and other appetizing Christmas delicacies.

A variety of choirs, orchestras and bands will be performing daily on the stage in front of the Kurhaus to put the visitors from around the world in the
Christmas mood.

On 6 December St. Nicholas will float to the ground in a hot-air balloon, directly in front of the illuminated Kurhaus, where he will be handling out presents to the children.

As well as carousels for the children, visitors can expect a rich offering of Christmas arts and crafts from the about 100 stalls as well as in the exclusive boutiques in the Kurhaus Colonnades. Items such as handcrafts, wooden toys and decorative candles will be on offer along with scarves and a wide selection of silver, amber and designer jewellery, fashion accessories, antiques and exquisite Meissen porcelain – perfect for Christmas gifts or even for treating yourself. 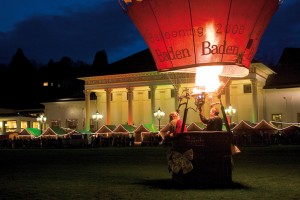 A particular attraction of Christmas in Baden-Baden is the ”living crèche”. The sound of bleating sheep and the scent of fresh hay will lead you to the idyllic
life-sized crib in front of the Kurhaus. An illuminated alley of colossal church windows painted by Baden-Baden pupils will make up another special optic highlight. The windows will be lightened from the back from the beginning of dawn on and will spread pre-Christmas atmospheric ambiance.

Before or after wandering through one of the most delightful of all German Christmas markets, you are recommended to take a stroll through the festively
illuminated old town part of the city with its chic boutiques and elegant shops where you’ll be able to find all those unusual presents that you’ve been
seeking for so long.

Beautifully decorated, the 2000 year old city and especially the Christkindelsmarkt attract people from all over the world.