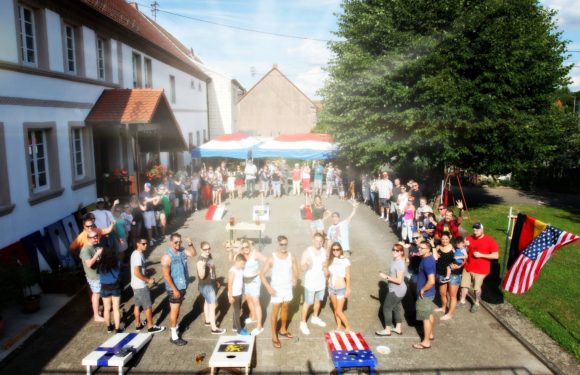 Story and photo by Morgan Fielder

Germans can be so fun! Can you believe that a group of German cornhole players living an hour away from Ramstein are hosting a “Cornhole Ocean Cruise”, which is guaranteed to make silly memories that will last a lifetime and get to play the world’s best backyard game. It’s 5 days, on a tour boat, checking out Hamburg, Oslo, Copenhagen and Kiel while playing cornhole. The cruise will set sail on April 29 and return on May 3  If you want to learn more, the website www.cornholeuropa.com will have English translated information.

A group of American civilians, airmen, soldiers, and their German neighbors formed a club in the dark days after a righteous new year’s eve fireworks display in the tiny village of Konken, located near Ramstein. The local village restaurant Gasthaus Gerlach opened up their indoor space so they could play rain or shine. This provides a great excuse for kids, adults, Germans, and Americans to hang out on Friday nights, learn more about each other, and have fun playing cornhole games with kids and dogs running around.

Is cornhole just for Americans and tailgating? Or, is it a way to build vibrant overseas experiences for expats and military stationed abroad?

With a little luck and social media, the Konken Cornhole Club connected to the burgeoning cornhole scene in Germany, Sweden, and the Netherlands.

No longer only for tailgaters and American frat boys, the game of cornhole is growing like crazy across the US & Europe with prize and money tournaments, fun holiday speed tournaments, and even an ocean cornhole cruise! Cornhole on a boat with some flippie floppies!

The local Konken Cornhole Club has been able to partner with several German cornhole clubs to bring some amazing German players down to the KMC to start a yearly tournament called the “German-American Friendship Tournament”. One German will be paired with one American in this blind draw tournament. How fun to get to know Germans other than your landlord!

Beginner, competitive, and youth players welcome: ladies and gentlemen. The first 32 teams to register will have a guaranteed spot.

If you would like to play some cornhole but can’t commit to the cruise, there are plenty of events in Ramstein as well. The next local Cornhole Europa tournament will be April 27 and June 22 also in Konken. This cornhole tournament/party/potluck has a twist: Costume contest! Theme: Superheros! Prizes for men, women, and family costumes. Get ready for the bounce house, opening ceremony and live band.

Connect with the locals over a friendly game of cornhole.

Author profile: Morgan Fielder is a DOD Civilian physical therapist living near Ramstein AFB raising two gorgeous girls, wife of a rebel, serial expat, and is actively involved in the German community through several organizations. Visit her blog at beyondexercises.com for more information.