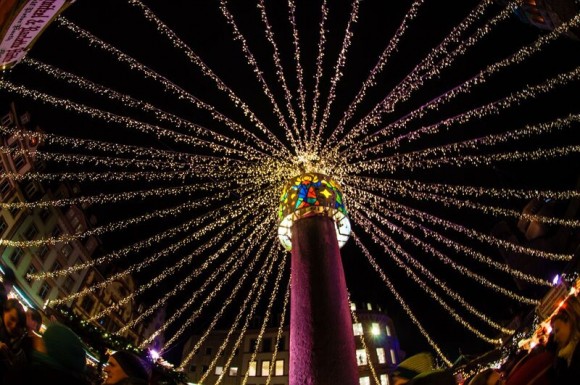 Under the Lights of the Mainz Christmas Market

The Mainz Christmas Market transforms the well-known streets into a magical Christmas town with market stands, food, drinks and spectacular lights. Once this market has you under its spell, it will be hard to leave! 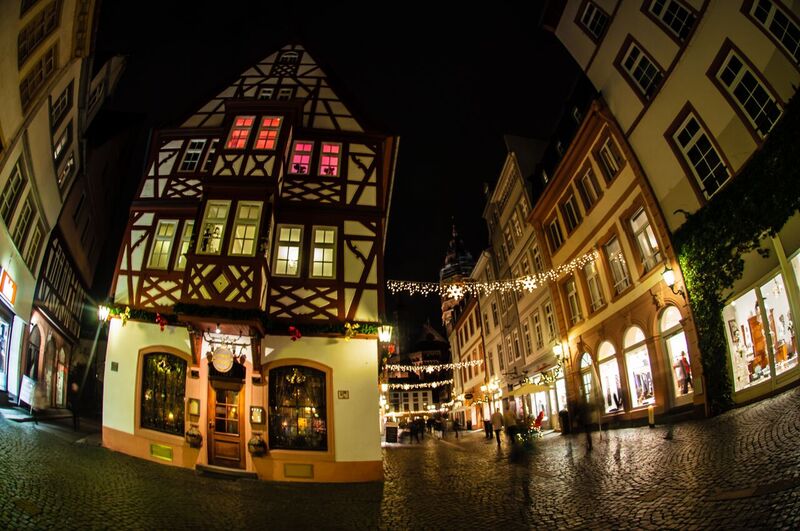 Mainz has such a gorgeous historic downtown and the Christmas Market makes it even more special. You first enter the market area on the main walking street where there are shops and restaurants. The market wraps about the Cathedral of St. Martin and goes from the walking street to almost down to the river.

When first entering the market, festive goers are greeted by a huge German Christmas pyramid (shaped like a windmill). 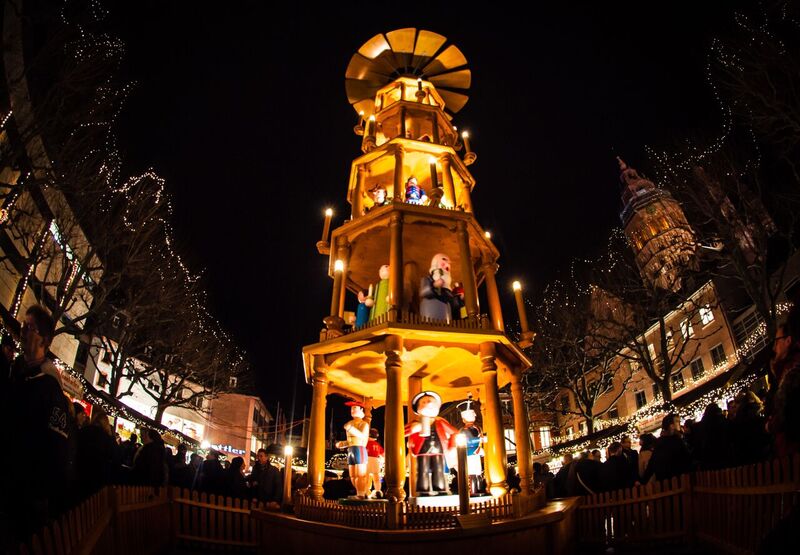 Originally coming from the Ore Mountains in German, it is said the Christmas pyramid was the predecessor of the Christmas tree. This German ornament can also be found in many American homes after German immigrants brought it to America in the 1700s. Growing up we, too, always had them in the house during Christmas.

As a child I was always fascinated how the heat from the candles generated wind, which made the propellers spin. It was quite hypnotizing! And if the spinning wooden propellers on the top would get jammed, they make contact with the flame and then ignite like a match stick! Yes, I learned that the hard way… 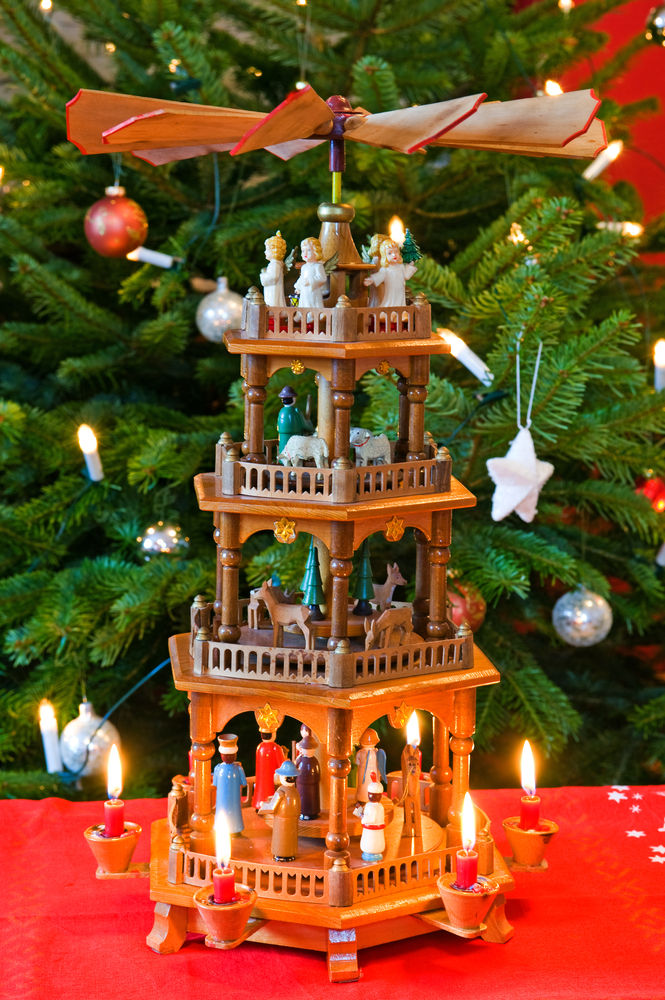 There I was in Mainz, standing next to the most gorgeous and biggest pyramid I could ever have imagined when I was young! It, along with the backdrop of the cathedral and market, truly brings out the Christmas spirit! 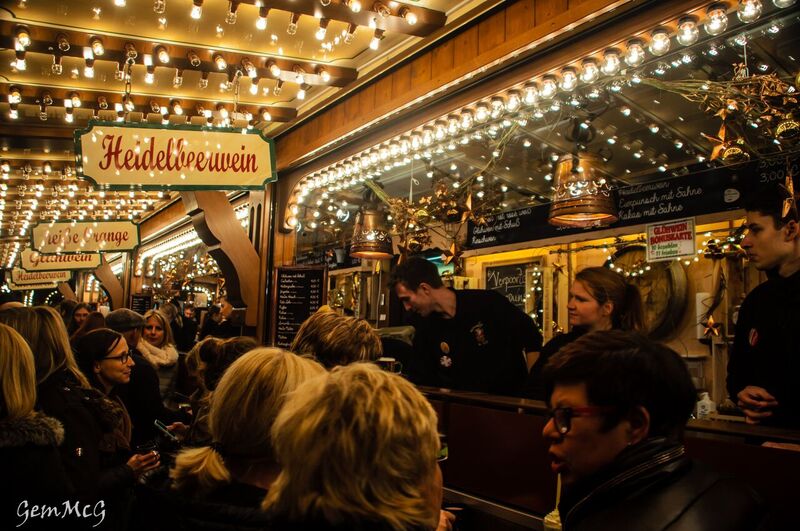 Compared to other markets in the area, the Mainz market is really big and has a large and sometimes packed crowd. Mainz has a university and I think at night every college student came out for a mug of Gluhwein. I strategically avoided the Gluhwein stands when I was trying to maneuver around the market. The drink selection was great though! 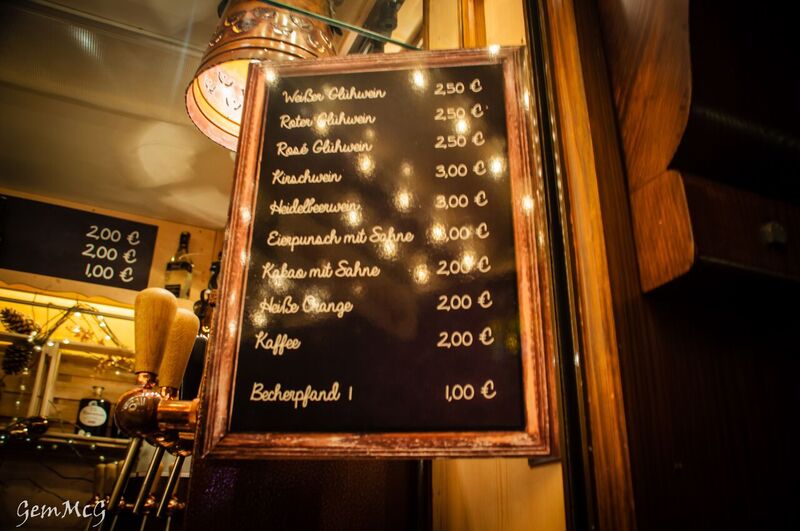 With great drinks comes hand in hand with great food and this market sure had it! I was impressed with the various options of food selections included chocolate covered fruit, waffles, roasted almonds, sausages, potato pancakes and snowballs (from Rothenberg oder Tauber). 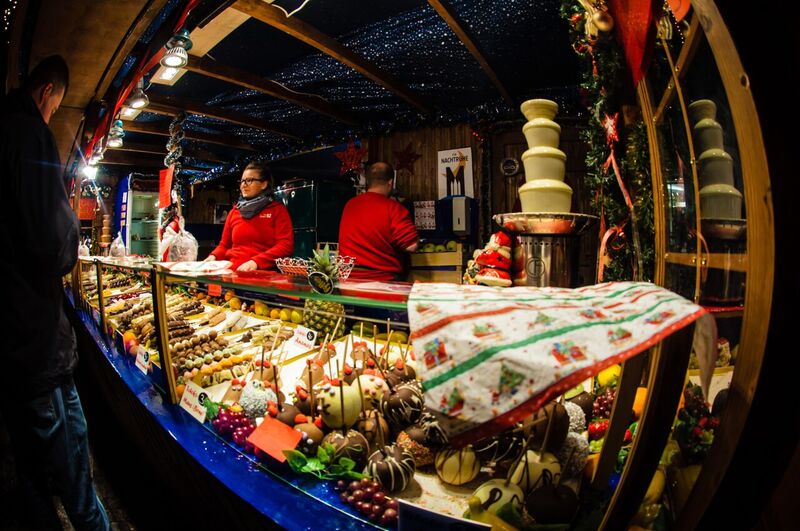 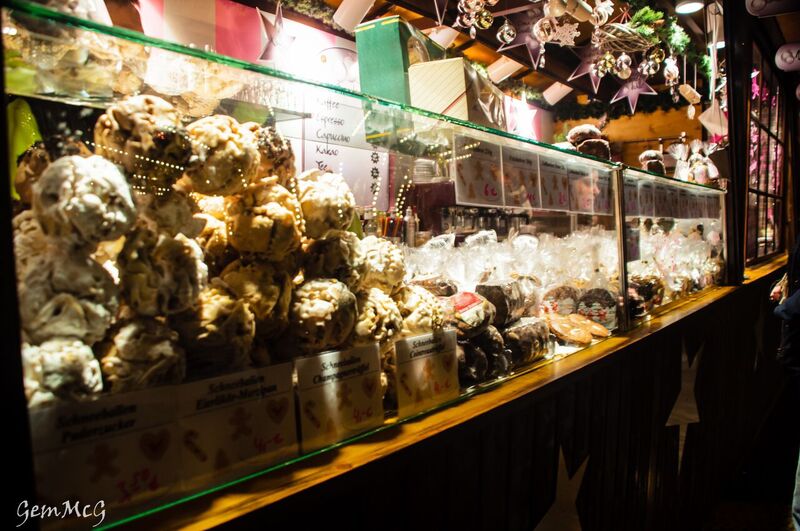 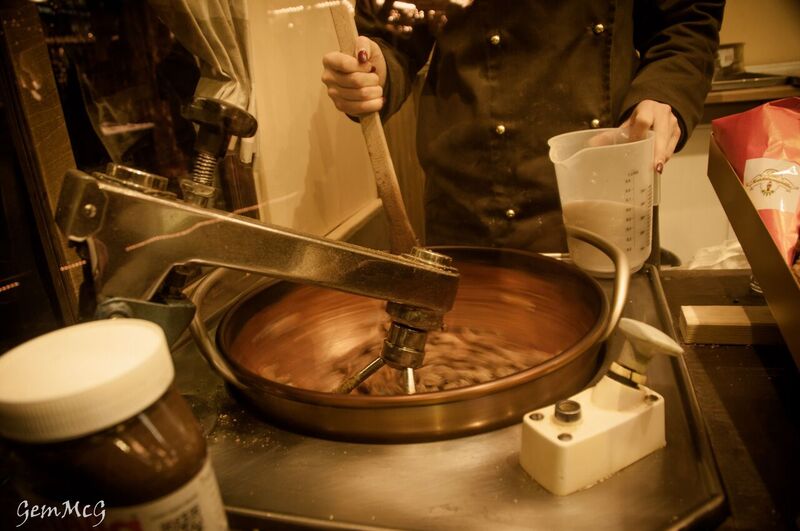 One food stand had a very long line of people standing and waiting. Though I had no idea what they could be waiting for, I decided to wait along with them. When the baker took out the tray of  pizzas, the people in the crowd said, “Ohhhhh…AHhhh!” Of course, I had to snap a photo! (By the way it smelled amazing.) 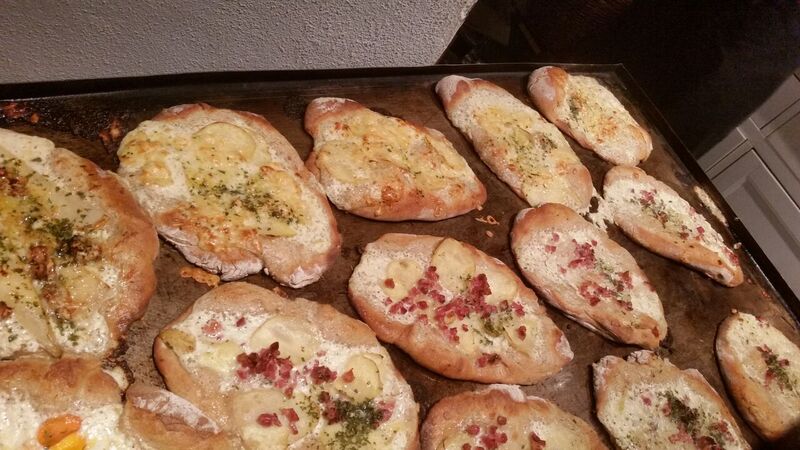 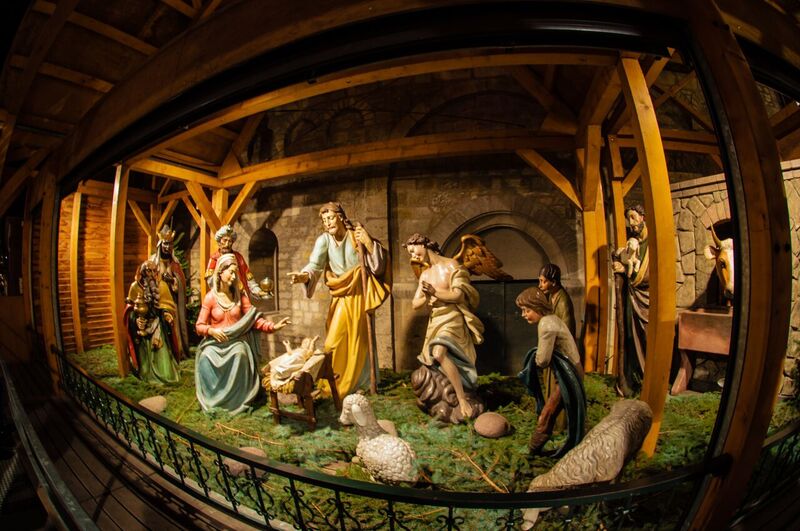 Very special aspects of this market is first the beautiful wooden manger scene (next to the church) and then the illuminating views. Located next the church on a stage, the manger is nicely lit up and has almost life-sized wooden figures with great detail. And from the manger’s stage, I was able to take in the fantastic view of my favorite section of the market- the strings of lights!

The area under these lights is a spot for people to come together and share a mug filled with their favorite warm drink together. Under the lights of the Mainz market, you can feel the warmth of the holiday season as everyone spread positive cheers and good will. 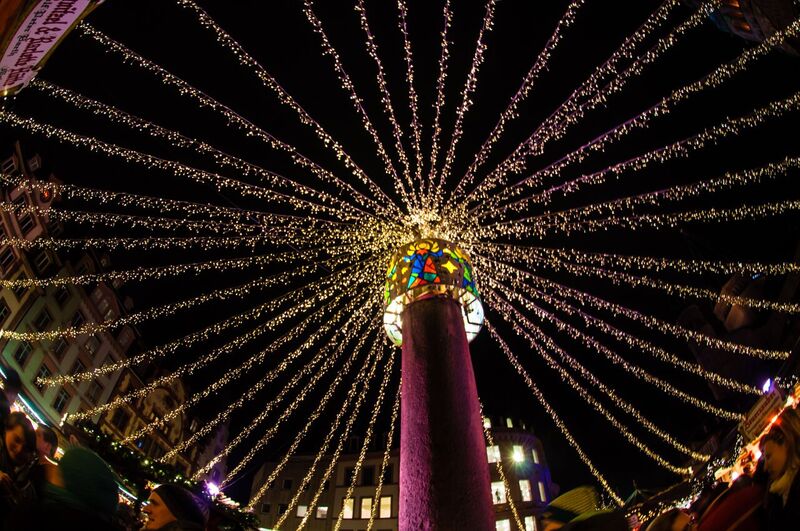 Like I mentioned before, you will not want to leave! From now until December 23, get lost for hours under the spectacular lights of the Mainz Christmas Market. 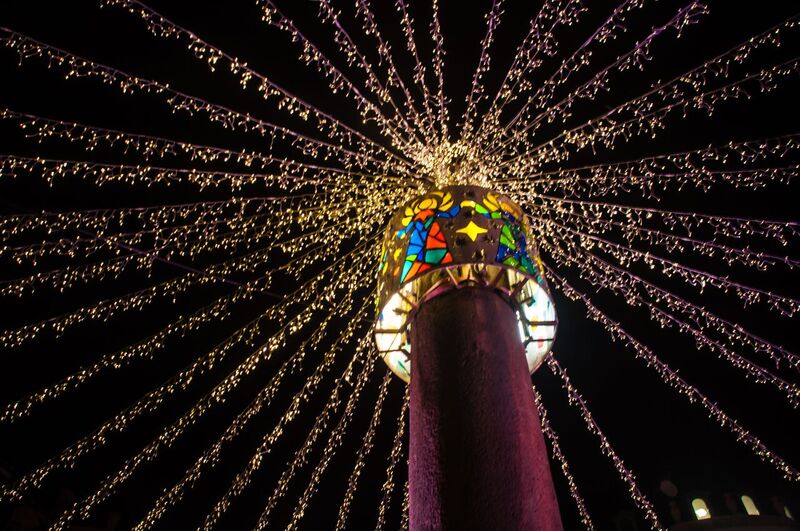 Mainz is approximately 30 minutes south of Wiesbaden, 1 hour northeast of Kaiserslautern and 2 hours and 15 minutes north of Stuttgart.