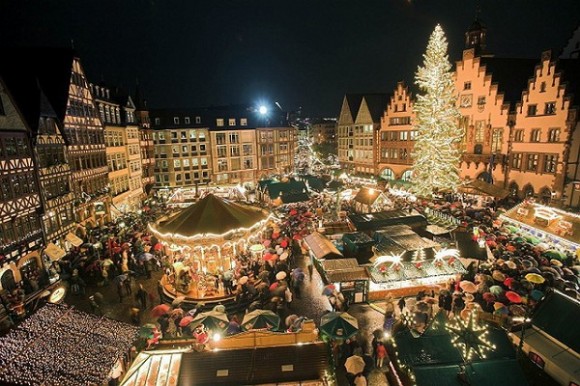 In Germany, “Christkindlmarkt” or Christmas market accompanies the four weeks of Advent. By far the most popular German Christmas markets are in Cologne, which have more than 3 million visitors every year and Nuremberg, considered to be “the prettiest.” But here’s my 20 best Christmas markets….

1. The Weihnachtszauber – sells mainly handmade goods and gourmet food. Shopper’s Tip – there are nightly music performances from Monday to Friday.

2. Potsdamer Platz Christmas market – a feature of the much larger celebration called Winter World, this one has an Austrian theme of ski huts. Shopper’s Tip – you can go ice skating or snow tubing if you want to take a rest from shopping. 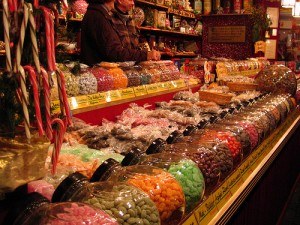 3. Nostalgic Market at the Opernpalais – it takes traditional Prussian values seriously and the merchandise is, as the name suggests, nostalgic pieces like antique jewelry. Shopper’s Tip – join the locals when they celebrate the 300th birthday of Frederick the Great.

4. Cologne Cathedral market – the biggest Christmas market in the city.

6. Angels’ market – located in Neumarkt square, it is known to be one of Cologne’s original markets that revived the Christmas market tradition in the 1970s. Shopper’s Tip – they open on 24 November 2014 and close on 23 December 2014.

7. Munich Christkindlmarkt – this hugely popular market is filled  to the rafters. Shopper’s Tip – they are open on Christmas Eve but only from 10 AM until 2:00 PM.

8. Munich Residenz Christmas market – this one has a farming village charmingly recreated in courtyard of the Munich Residenz, the former seat of government of the Bavarian region.

9. Sendlinger Tor market – located at what used to be the southern gates of a city in the Middle Ages.

10. Mittelaltermarkt or the “Middle Ages” market – as the name says, this one recreates the atmosphere of the original Christmas markets of Munich with handmade stalls, Medieval music, and stallholders dressed in the fashion of the Middle Ages. Shopper’s Tip – this is one closes even earlier than most markets at 8 PM. 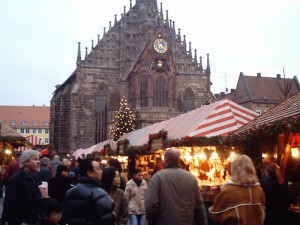 11. Striezelmarkt – the largest Christmas market in Germany’s eastern region with traditional Christmas merchandise such as trees, and handcrafted trimmings, and decorations. Shopper’s Tip – open Mondays to Sundays from 10:00 AM to 9:00 PM

12. Augustusmarkt – white pagodas will rise from the old huts to sell merchandise on 28 November 2014. Shopper’s Tip – open from Mondays to Sundays but with varying opening and closing hours.

13. Frauenkirche Christmas market – held just outside the renowned Frauenkirche church amidst restaurants and specialty shops. Shopper’s Tip – they are open on Christmas Eve at 10:00 AM but closes at 2:00 PM.

14. Dresden Winter Lights market – this has been re-branded to focus on illumination or lighting merchandise, with a 15 metre-tall Christmas tree. Shopper’s Tip – various kinds of Christmas lights and light fixtures are the specialties.

15. Winterwald – this has a unique concept: a winter forest right in the city’s centre. Shopper’s Tip – open Mondays to Sundays from 10:00 AM to 9:00 PM but closed on Christmas Day, 25 December 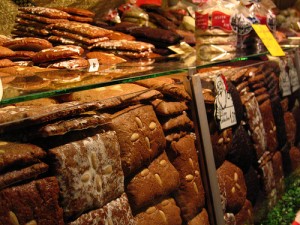 16. Weiss Zauber – located on a promenade running along a large artificial lake enclosed within the city. Shopper’s Tip – closed on Christmas Eve, 24 December and Christmas Day, 25 December but open starting 24 November from 11:00 AM until 9:00 PM.

17. Fleet Christmas market – this market is also unique because of the “canals” surrounding it, earning the monicker, Fleet “Island.” Shopper’s Tip – this opens at 12:00 NN and closes at 9:00 PM.

19. Schlachte Magic Christmas market – located along the Weser River, this market is dotted with medieval taverns and sellers are impeccably dressed in medieval outfits. Shopper’s Tip – along with Christmas items, this market sells maritime paraphernalia as well such as hand carved ships in bottles.

Looking for a place to stay in Bremen?  Try out one of these cool apartments we found.
Schnoor Gästehaus
Apartment Nath

20. Nuremberg Christmas market – the most famous and prettiest Christmas market in all of Germany, with 180 wooden stalls decorated in white and red fabric. Shopper’s Tip – this sells unusual souvenirs including tiny figurines made from prunes called Zwetschgenmännle.

It would take several days for a visitor to make a clean sweep of all these Christmas markets but even so, visitors can stay a little longer (remember to take out travel insurance), savour the Bratwurst and Glühwein, and visit historical landmarks while taking a tour of the country’s renowned Christmas markets. As a general rule, Christmas markets open in late November and are held in a city’s square or the town plaza.

Author Profile:
Story and Photos by Julia: I’m very fond of travelling as well as photography. I`m very active and communicative person who adores making new friends around the globe. Being also a traveller writer, I’m trying to describe the most incredible travelling experiences in my stories.  My google + account
Cover photo by Frank Rumpenhorst dpa/lhe