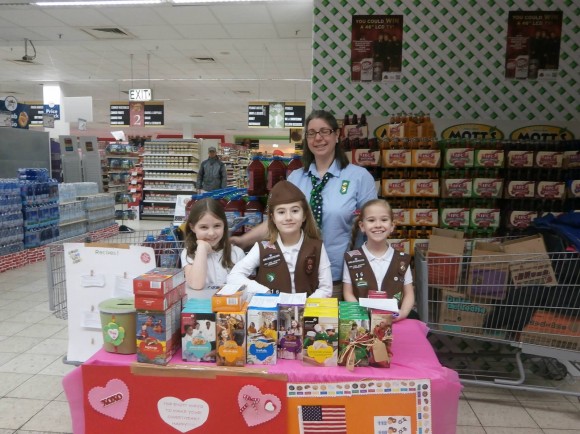 Deployed airmen and soldiers in Kosovo received a sweet treat from the Brownie Girl Scouts of Kaiserslautern/Vogelweh Brownie Troop 16.

The local Scouts collected 144 donated boxes of girls scout cookies for deployed Airmen, Soldiers, Sailors, and Marines at Camp Film City, Pristina, Kosovo. This gift was part of the Troop’s annual cookie sales fundraiser during February and March 2014, and included donations from people in the greater Ramstein Air Base and US Army Garrison Rhineland-Pfalz region. The girls sold cookies at the Ramstein AAFES BX, Vogelweh Commissary, and other locations. As the girls sold cookies they would ask if the shopper would like to buy additional cookies for the deployed forces, resulting in an additional 144 boxes of cookies sold and shipped.

Since the father of one of the brownie scouts, USAF Major DeWitt Latimer IV, USAFE Warrior Preparation Center, Einsiedlerhof AS, Germany, was due to deploy to Kosovo in April, the Brownies asked him to help get the cookies directly to the soldiers.  The Brownies shipped the cookies from the Military Post Office at Vogelweh to the US Balkans National Support Element at Camp Film City in Pristina, Kosovo.

MAJ Latimer said: “You should have seen my fellow service members tearing into the packages. It looked like the Cookie Monster from Sesame Street plowing into a plate of cookies.” The surviving cookies are in the US Recreation Center for all to enjoy.

“We are very grateful to the Brownie Scouts of Troop 16 for their kindness and to all those great Americans who bought an extra box or two for us,” LTC Roger T. Aeschliman, Commander of the Balkans National Support Element, said. “This is one of those forgotten theaters where US service members are doing great work in helping maintain the safety and security of Kosovo. It is nice to be remembered.”