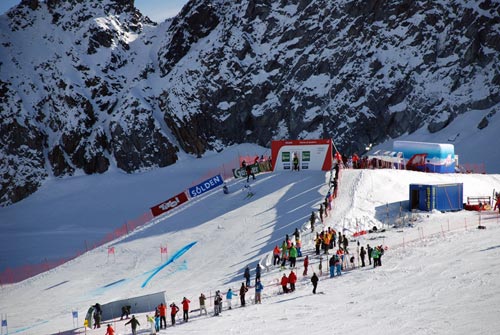 The FIS race season opened this weekend with men’s and women’s Super G races on the Rettenbach glacier high above Solden. The women went yesterday and surprisingly there were no highly ranked American finishers. Today however the score was settled with Ted Ligety taking first place in the season opener, winning the first leg of the race this on Sunday morning and then sealing victory with the second run just after lunch. With 15,000 people there to watch the race the atmosphere was great. Saturday night hosted one of the bigger annual parties in the Alps and Solden by early evening was pulsating. The US team will certainly be in great spirits after this first FIS weekend of the season whilst the Ted Ligety fan club who supported him in Solden are sure to be enjoying their time in this lively resort. 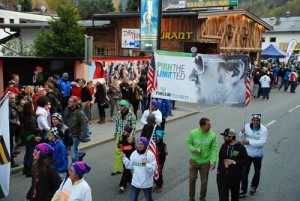 The US ski team has its official European base in Solden and trains on the glaciers there. The glacier skiing area is made up of the Rettenbach and Tiefenbach glaciers high above Solden, with a top altitude of 3250m and a season that runs from September to June each year. Unlike many glacier skiing areas, the Solden ski area above the resort is lift and ski piste connected to the Rettenbach and Tiefenbach glaciers and there is a whopping ca. 2km vertical back down to the resort. As well as the sensational snow record for the area, the skiing in Solden offers some good steep skiing around Hochsolden and the Gaislachkogl. Off the slopes Solden is one of the liveliest resorts in the Alps, whilst for those wanting a slower pace or some apres ski R&R, the Aqua Dome is located just north along the valley and is one of the premium public thermal spas in the Alps.

More information on the Solden http://www.skiingaustria.co.uk/solden.html