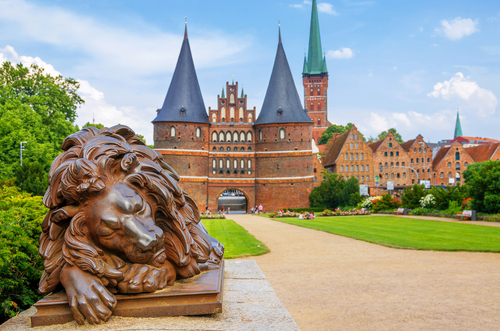 Lübeck – Queen of the Harbors

Whether you are stationed in KMC, Wiesbaden or Stuttgart – there are many day trips you can enjoy without going too far. However, if you fancy stretching your legs a little further and discovering a little more about famous cities in Germany, then visiting Lübeck is the trip for you.

By car, the journey can take just over five hours from Wiesbaden/Frankfurt and around 6-7 from KMC or Stuttgart, so it’s really more of a weekend break, or a stop off en route to Scandinavia. It’s also quite close to Hamburg, so if you have a couple of extra days, you can cover both cities. Travelling by Deutsche Bahn takes around the same time as driving, but is of course a more relaxing way to travel even though, depending on when you book it, the DB can be more expensive than gas.

Founded 900 years ago, Lubeck, or City Of The Seven Towers, is simply one of the most stunning cities in northern Germany with beautiful narrow cobbled streets, a lush river and a mixture of Gothic, Baroque, Renaissance and Neo-Classical buildings. Its rich history and glorious architecture means it was quite rightly listed by UNESCO as a world heritage site in 1987. And despite substantial war damage, there is still plenty to do and see in the city founded as the ‘first western city on the Baltic coast.’

Today its history still speaks volumes and no visit would be complete without visiting the Holsten Gate, the Church of Saint Mary and the Petrikirche which has a tower lift with stunning views of the town and Baltic.

It is the Holsten Gate which is probably the city’s most famous landmark. Most walking tours start from here and it stands as a symbol of Lubeck’s importance in the medieval age. The round towers and bridge are flanked by two iron lions with a museum inside.

The Church of Saint Mary has the highest brick vaulted roof in the world and is a model for about 70 other Baltic churches. You will find it opposite the MuK hall in the old town.

Despite its beauty, Lubeck is also home to one of World War II’s biggest naval disasters when three ships filled with concentration camp inmates were bombed and sunk by the RAF. 7,000 were killed. It is an easy walk to the port to pay your respects.

But if walking is not for you, it is possible to take to the water. Old Lubeck is actually an island on the River Trave and there are many short or pleasure cruises on offer.

The town is also famous for its marzipan, and no visit is complete without tasting some of the traditional almond sweet. Legend has it that in a period of shortage, all the food apart from sugar and almonds ran out, leaving local chefs no option but to create marzipan to feed the people.

Like most places in Germany, Lübeck also holds a huge traditional Christmas market in December, which due to the city’s historic architecture provides a magical setting.

There is a lot to do in the evening, with a plethora of good bars and restaurants, though most will not venture too far away from the traditional Germanic fare of potatoes, meat and beer.

However, as with many European cities, it also has flavours of multi-culturalism, with an increasing Turkish, Polish and Greek population. This can be seen in some of the cafes and bars in and surrounding the city. And perhaps unsurprisingly it is also home to its fair share of Irish bars.

When it is time to leave, you can return back south, or continue your trip north. If you take the Autobahn, you can be in Denmark in under two hours. But that’s for another day…

Author profile:
Lima Curtis writes about travel and relocation around the world for MoveHub.