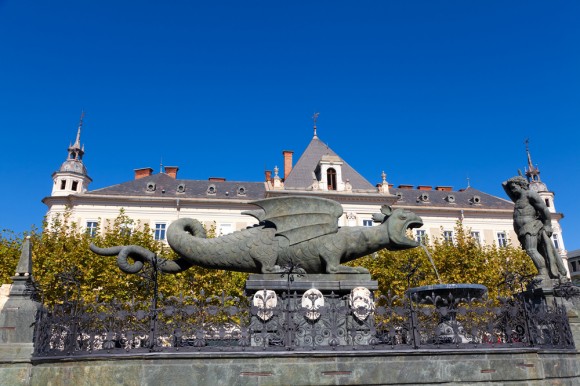 The city of Klagenfurt lies in the south of Austria, almost as far from Innsbruck to the west, as from Vienna to the northeast, but just a short drive from Ljubljana, the capital of Slovenia. It’s a beautiful part of Austria, which includes numerous gorgeous lakes and spectacular views of the surrounding forest-covered hills and soaring mountains which tower over the cityscape. Klagenfurt is often referred to as the ‘Rose of the Lake Wörthersee’.

When you arrive in Klagenfurt you will find a city which is modern yet retains its old world charm and appeal. Predominantly Italian master builders have determined the appearance of the historic old town. Discover magnificent Renaissance buildings, facades renovated true to the original style and shady arcaded inner courtyards on a stroll through the old town; see the beauty of the sacral buildings on a church walk; or visit one of the many museums, castles and galleries.

In winter time, Klagenfurt presents its most charming side. From the beginning of December, the Christmas Market turns the old town into a romantic Christmas dream. The streets and lanes are festively decorated with care, and the smell of mulled wine and advent cookies permeate the air.

Klagenfurt and the surrounding area can be enjoyed any time of the year, here are our top tips for the best sights to enjoy:

The Lindwurm (Dragon) is the emblem of Klagenfurt and this revered statue can be found in centre of the city’s major square, Neuer Platz.

The statue was built in the 16th century, modelled on the Lindwurm of legend, which is said to have resided in a swamp here long ago, devouring cattle and virgins and causing immense flooding until it was killed by some brave young men in the area. A picture beneath the Lindwurm is practically mandatory when in Klagenfurt. 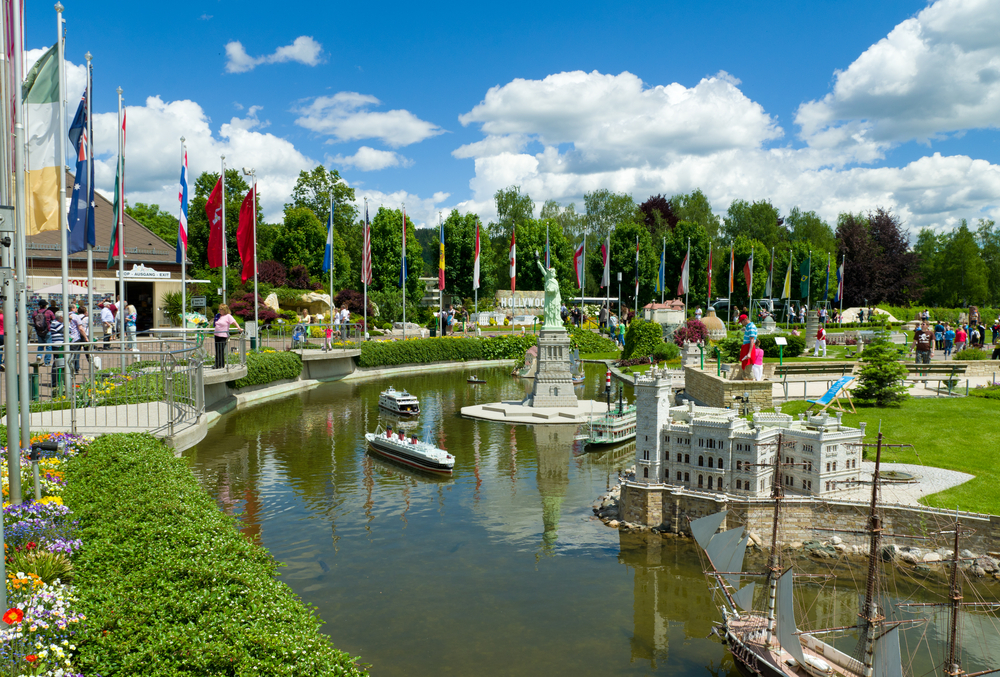 Minimundus is a miniature park or rather a park of miniatures. It displays over 150 miniature models of architecture from around the world. All of the buildings found within this park are built to scale and they are exceptionally beautiful.

You will find models of the White House, the Taj Mahal, and the Eiffel Tower, the Suleiman Mosque, the Statue of Liberty, St. Peter’s Basilica, The Tower of London and many others. It’s a terrific place to visit for kids, and big kids.

Southwest of Klagenfurt lies Viktring, now part of Klagenfurt, which is known for its Cistercian abbey (founded in 1142 and dissolved in 1786), one of the most important abbey buildings in Carinthia.

It possesses two beautiful arcaded courtyards and an Early Gothic church with Burgundian pointed vaulting. It also houses a superb stained glass of c. 1400, depicting the Twelve Apostles and other subjects.

In 1970 the Austrian government bought the buildings and set up a secondary school here, which now specialises in musical education.

Experience the power of water in its finest form. The cascading water in the Tscheppaschlucht (canyon) in Ferlach has created a landscape that is a delight to experience – deep gorges, steep cliffs, diverse fauna and flora, natural mixed forest, quiet brooks and wild roaring waterfalls.

Booking.com
This is a super walk through a centuries-old canyon that will appeal to nature-lovers and adventurers. There are several route variants depending on how much you would like to do and how strenuous. The paths, bridges, ladders and walkways are well secured, but are challenging and sometimes slippery – so sturdy walking shoes are advised.

The absolute highlight of any of the walking tours of the Tscheppaschlucht is the Tschauko waterfall with a rock arch and the infamous Devil’s Suspension Bridge – if you dare.

It’s possible to walk from one end of the canyon to the other, picking up a bus to return you to the car park from where you start. But do check the bus times before you set out – it’s a long walk back.

There are plenty of geo-caches hidden in this area to add a little intrigue to your ramble and a brand new high ropes course, which is fantastic for the whole family to experience in these incredible surroundings.

Gustav Mahler was a famous musician who lived and worked close to Klagenfurt. Sometime in 1899 he bought a small mansion which has today been turned into an archival museum about him.

Here you will be able to see various postcards, letters and other documents which were written by Gustav Mahler. Since the museum has guides who can speak English, French and German you should not have any trouble understanding the various exhibits you will see. This museum is open from May to October from 10am to 4pm. 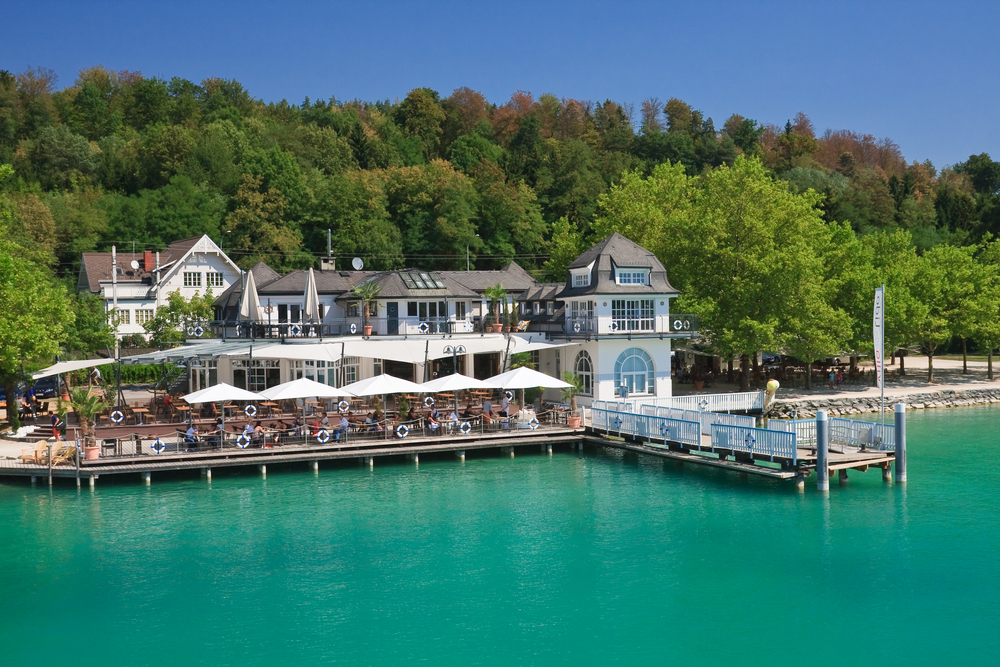 In between your various sightseeing excursions you may like to visit Lake Wörthersee. The lake is elongated, about 20 km long and 1–2 km wide. It stretches from Klagenfurt in the east to Velden in the west. It’s flanked to the north and south by steep alpine foothills covered with glorious dense forests, beyond which snow-capped alpine peaks are visible.

The lake’s water is a distinctive blue-green colour and transparent. This lake is the warmest of the large Alpine lakes and Europe’s largest non-sea beach and lido area. The 50km cycle path around Lake Wörthersee is ranked one of the ‘Top 10’ in Austria.

In winter, the region is often covered by snow and approximately every 10 years the lake freezes over, attracting numerous ice skaters. 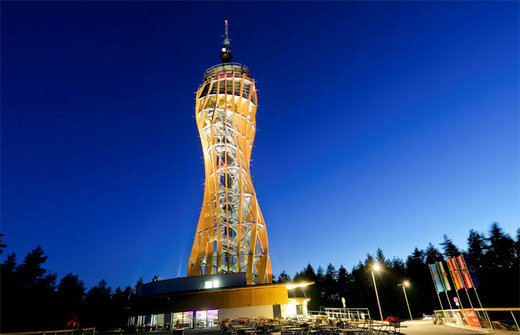 The highest wooden observation tower in the world is located above the Lake Wörthersee in Keutschach and having opened in just June 2013 it is the newest attraction in the area.

From the observation tower, with a height of nearly 100 meters, you can enjoy the breathtaking view of the mountains and the Lakes of Carinthia. At the highest point there is also a “sky box”, a room with panoramic view for all kind of events. You can reach the top using the panoramic lifts or the stairs if you are sporty.

At the base of the building there is a restaurant with a terrace and a small shop where you can buy souvenirs. Furthermore, there is a playground for younger guests.

The Loibl Pass is a high mountain pass in the Karavanke chain of the Alps, which links Austria to Slovenia.

The 1,570m long tunnel at this border point between Austria and Slovenia is controversial because it was built during WWII using the slave-labor of prisoners from a satellite camp of the infamous Mauthausen-Gusen concentration camp system, which was under the command of a notorious SS officer, Julius Ludolf. Mauthausen-Gusen was one of the last camps to be liberated at the end of the war by the Allies and was known for it’s brutal regime of “extermination through labor”.

The first army vehicles passed the very tight tunnel on 4 December 1944. Military traffic, Wehrmacht soldiers retreating from the Yugoslav Front and refugees used the tunnel until it was closed in 1947. Then a border crossing between Austria and the Federal People’s Republic of Yugoslavia, it was reopened in 1950 and expanded to two lanes in 1966, while the old road over the mountain pass itself has been closed for traffic since 1967.

The importance of the Loibl Pass has diminished as a useful trade and traffic route since 1991, when the 7,864m long Karawanken Motorway Tunnel, which connects the Austria quickly to Ljubljana was opened. It’s now a tourist route, particularly favoured by motorcyclists.

Whilst there is nothing especially of note to see or do here, the tunnel is a memorial to those prisoners of war who built it under such horrendous conditions and is therefore worth a visit if only to pay your respects. A commemorative building on the site of the workers’ accommodation is planned for the future.

In stark contrast to it’s dark history, the steep and winding road leading to and through the tunnel offers some breathtaking views and somewhat of a white knuckle ride for the adventurous.

Klagenfurt does boast it’s own airport, but most major airlines fly into nearby Ljubljana direct from Frankfurt or Munich. From there you can pick up a rental car or a bus to Klagenfurt.