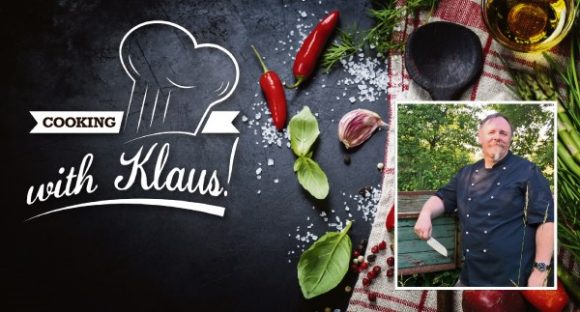 Cooking with Klaus – Recipes for Everyone!

Chef Klaus has been beating schnitzel senseless and terrorizing eggs for over 35 years in such highly regarded restaurants such as the Hotel Post in Garmisch-Partinkirchen.
Born in Baden Württemberg, he now calls Ramstein home and spends time in Karlsruhe as well.

“Cooking with Klaus” is a roving cooking class that Chef Klaus brings to the homes of wanna-be chefs and weekend warriors of the griddle who are interested in learning the secrets from the master.

Klaus Hartmann focuses his classes on German food for foreigners who want to learn the tricks of the trade.

The series “Cooking With Klaus” will run each week with delicious recipes from German standards and beyond.
Check back often for your next culinary inspiration.