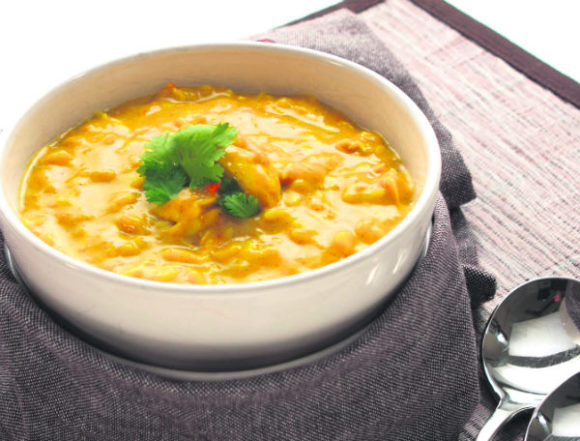 Put chicken in a pot with cold water. Heat it slowly. Remove the foam on the top after it starts to simmer. When there is no more foam, add vegetables and season to taste. Reduce the heat to simmer for 1.5 hours. Make sure that the chicken remains covered with liquid for the entire time. Take chicken out and put in cold water to cool it down. Remove the skin and debone the chicken. Remove the vegetables from the broth so that you have a clear chicken broth.
• 2 tablespoons flour
• 2 tablespoons margarine
• ¼ cup white wine
• 1 cup milk
• 8-10 cups of chicken broth
• Chicken meat diced
• 3 cups of sliced fresh mushrooms
• 1 cup heavy cream
• 2 egg yolks
• Salt and Ground White Pepper for seasoning

To make the roux, melt 1 ½ tablespoons margarine in a pot, careful not to overheat. Add the flour, reducing the heat to a minimum while constantly stirring. The longer you gently roast the flour on low heat the less time you will need for the soup to simmer to remove the flour taste in the soup. Add milk and white wine, stirring constantly. The goal is to get the least amount of flour crumbs as possible. Add chicken broth. Bring to boil, stirring constantly. After it has come to a boil, reduce heat to medium, continuing to stir constantly. This will prevent the soup from sticking to the bottom of the pot. Let simmer for 20-25 minutes, stirring constantly.

In a second pot, melt ½ tablespoon margarine. Add mushrooms, stirring until there is no more liquid in the pot. Take a fine strainer and strain the soup into the mushroom pot. Bring to boil. Season to taste. Add the chicken meat. Gently whisk the heavy cream with the two egg yolks in a bowl. Take the soup off the stove. Let it sit for 2-3 minutes. Then gently fold the egg and cream mixture into the soup. The soup should not come to a boil again at this point.

A glass of Silvaner or Riesling will be nice with this soup. If you prefer Italian wines, a Pinot Grigio or Lugana would complement this soup very nicely.