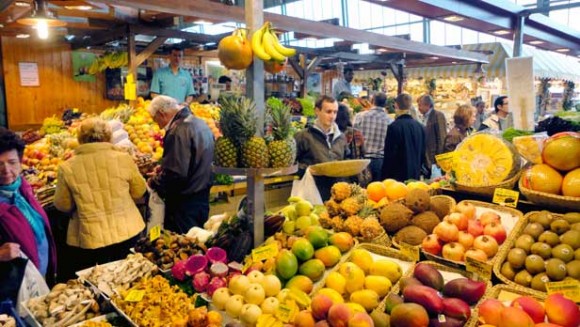 4 things to do in Frankfurt

Frankfurt am Main, which means “Frankfurt on the Main,” because of the Main River (pronounced “MINE”) running through the city, is often overlooked by tourists passing through the international airport. Frankfurt’s city center is a unique blend of traditional and modern and is the perfect place to explore for a day or a weekend.

There are about 350 banks in Frankfurt, making it the financial center of Germany, second only to London in Europe. The international residents of the city means that you can easily find a variety of restaurants serving dishes from all parts of the world including Thailand, Japan, Mexico and India.

Take a look at four great ways to spend the day in Frankfurt:

1) The Frankfurt on Foot Walking Tour

This English language tour takes place daily at 10:30 a.m. regardless of the weather and is the perfect way to familarize yourself with the city while also learning a bit about its history. It is the No. 1 rated sightseeing event on TripAdvisor, and a three hour tour costs only 12 Euro for adults or 10 Euro for those under 26, students, military and seniors. A partial list of sights include Römerberg, Bookburning Memorial, Alte Nikolai Church, Eisener Steg Bridge over the Main River, Kaiserdom, the medieval Jewish cemetary, Kleinmarkthalle, Hauptwache, the Frankfurt Stock Exchange, Eschenheimer Tower, Goethe’s birthplace, the Alte Oper (Old Opera building), plus the shopping area called “Zeil” and more.

Meeting point for the start of the tour is Braubachstrasse 36, across the street from Starbucks. Call: 0152-08464-200 or email: info@frankfurtonfoot.com 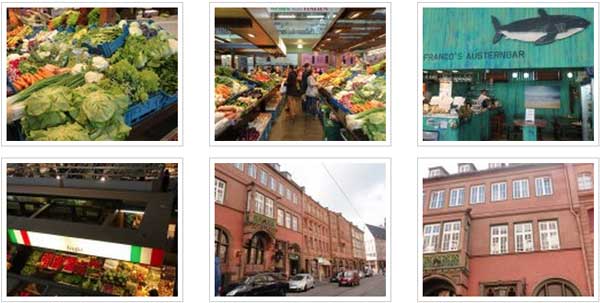 (Neue Mainzer Straße 52-58)  This is the fourth largest building in “Mainhattan,” a reference used by locals referring to the city’s skyline. Catch the elevator for a great view of the entire Rhein-Main area from 56 stories (about 650 feet) above the city streets. If you are hungry, there is a restaurant on the 53rd floor or, if you just want a beverage, there is a lounge on the same level – both with spectacular views. Entry for adults is 5 Euro. A reduced fare of 3.50 Euro is available for students, seniors and handicapped. Children under 6 are free. In the summer, the tower is open every day from 10 a.m. to 9 p.m. and in the winter until 7 p.m. (it stays open two hours later on Friday and Saturday). For details, see www.maintower.de

Booking.com
It is so named because it refers to nine museums lined up almost one after another on the banks of the Main River, opposite the city center. This means you have to cross the river on one of the several bridges to get to Museumsufer. One of the most important of these nine museums is the Städel Museum (Dürerstrasse 2), which contains works of old masters and modern art as well as contemporary art. Other museums on the Museumsufer include the German Film Museum, the Museum of Communication and the Museum of World Cultures. See www.frankfurt.de for more information.

This is Frankfurt’s famous shopping mile. It is a long, wide, pedestrian zone lined with double rows of trees and bordered on both sides of the street with stores of the most famous brands along with unique boutiques. You can find the Zeil on the street that is between the so-called Hauptwache (Main Watch) and the Konstablerwache (Constable’s Watch). Restaurants, pubs and coffee houses abound in this area.

Tip:
At the Hauptwache, you can find two indoor shopping centers. One is called the Zeilgalerie and the other is called Frankfurt Hoch 4. The Zeilgalerie has a viewing platform from which you can have a great view of the skyline and the entire city stretching to the Taunus Mountains just north of Frankfurt. 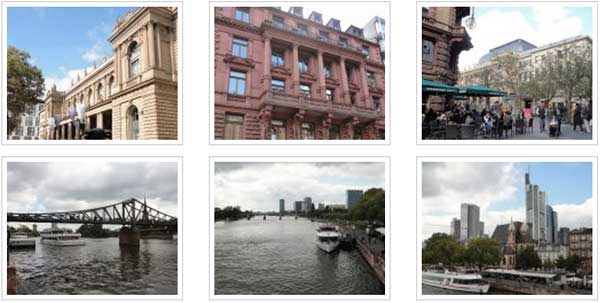 Located at Neue Mainzer Strasse 84 near the Main Tower, this is a great place to stop for a light bite. During the week they have a luncheon special for 8.50 Euro and there is a conveyor belt that runs the circuit through the restaurant with colorful, tasty varieties of the most popular sushi dishes.

If you thought you would never find a real steakhouse in Germany, you would be wrong! This quality steakhouse is loosely patterned after Morton’s of Chicago and serves only USDA Natural Prime Beef, offering various sizes of each cut. None of their steaks contain hormones, antibiotics, or growth stimulants and in true steakhouse style, they do not like to cook their meat well done for fear of ruining the steak; the standard order is cooked medium.

I ordered a ribeye (430 grams or almost a pound) for 45 Euro. My wife got the Medaillons, which at 35 Euro, consisted of three smaller cuts of filet, each of which had a different sauce. The wine selection is excellent, mostly red, and ranges from 59 Euro and up.

We were able to get a double room at this four-star hotel, located at Vilbeler Strasse 2, for a surprising 103 Euro, including taxes and breakfast. Parking was 18 Euro per day. This hotel is not more than 20 minutes walking distance to all the sites discussed above.

Since Frankfurt is the economic hub of Germany, the hotels cater mainly to business travelers from around the world. As a result, rooms are often cheaper during the weekend nights, since most business travelers head home by weekend. Call or check online to find deals, specifically for hotel chains that are frequented by business travelers or are in business districts of the city.