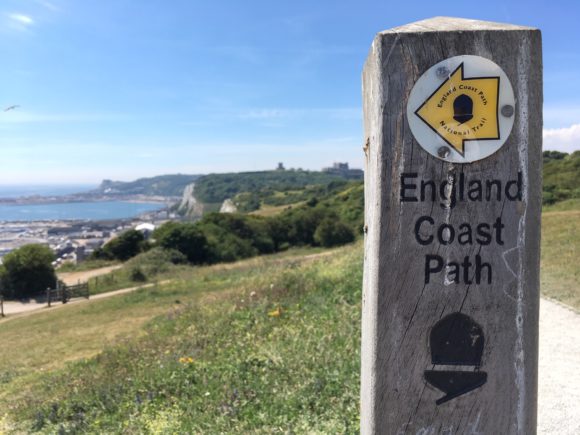 Photos and story by Leonie Milde

In the Summer of 2018, I felt I had seen and written enough (for now) about Germany and the United States and decided it was time for something new. So I packed up a little Mini Countryman and embarked on what I would call the GREATest BRITAIN road trip. A terrible pun for a life-changing experience. Over the course of 3 months and almost 11,000 kilometres, I ate way more beans on toast than any nutritionist would advise you to, climbed way less mountains than I had anticipated, understood way less than someone fluent in English would expect from an English-speaking nation and fell umbrella over rain boots in love with the people, the culture and, most importantly, the landscape of this magnificent island(s).

But isn’t the UK just loud pubs, rain, and vinegary food? Nope! In 7 parts, I will recap my adventure and introduce you to destinations that might not have been on your radar yet but absolutely should be. (The following travel tips do not require dropping everything for 3 whole months, each destination can be explored separately in a week or less.) 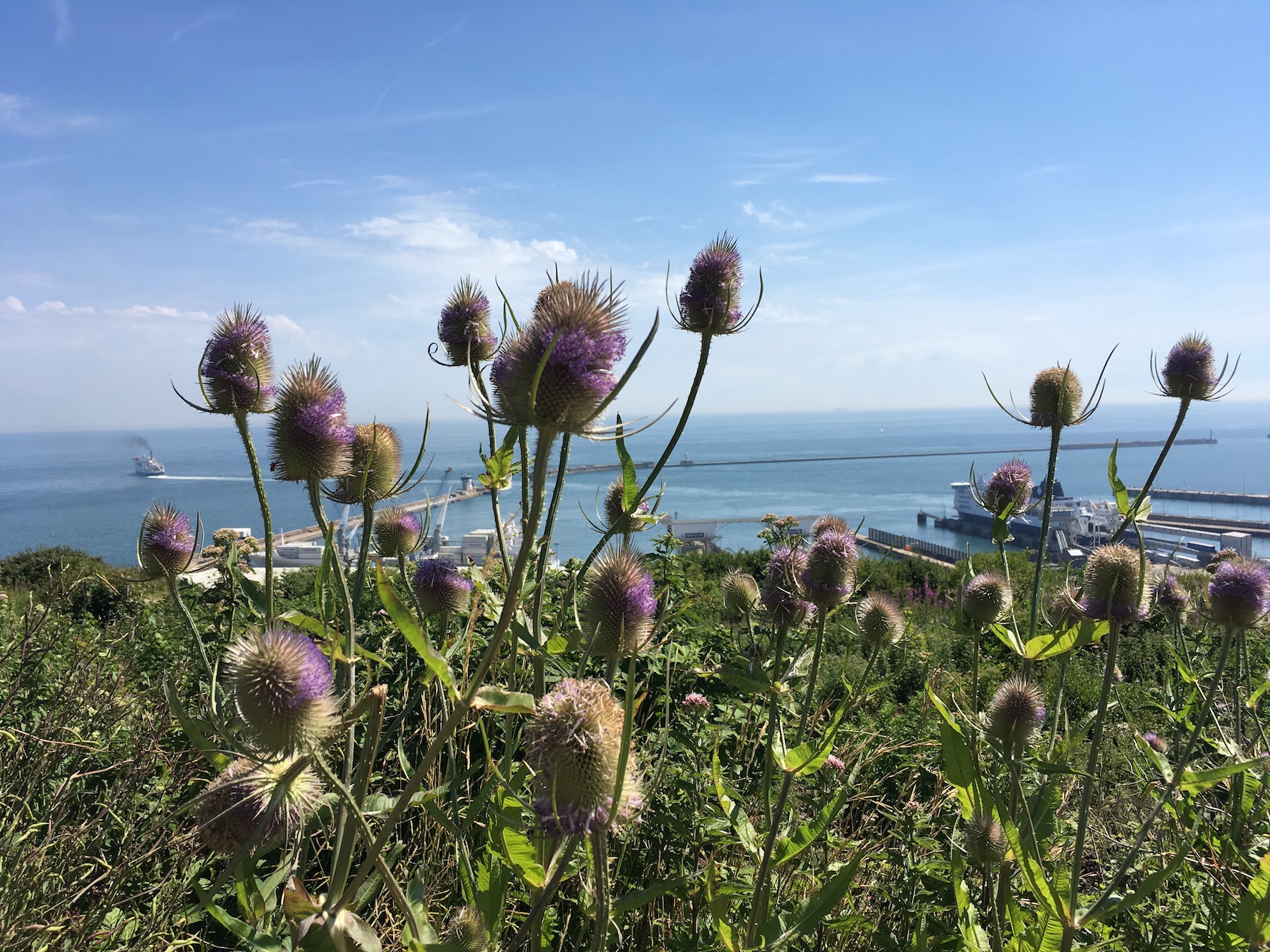 The Scottish national flower, a thistle, welcomed me at the harbour in Dover.

Thanks to my love, Ryanair, I have been to the UK about 30 times in the last four years with no intention of stopping anytime soon. There’s just something about the charming stone cottages, dreamy meadows, blissful flock of sheep and that accent that excite me every time I come back.I didn’t realize the UK had such a bad reputation until I began telling people about my plans and faced responses such as ‘but it’s cold and grey’, ‘but what is there to see’, ‘all they eat is Fish and Chips’ and ‘why England?’. Oddly enough, these comments did the opposite of discouraging me and I was even more determined to prove people wrong. And oh my did I prove them wrong.

People were also shocked when I told them I would be driving up there in my own car, which had me worrying whether I was making a mistake, too, but it turned out to be quite reassuring to at least be sitting on the familiar side of the car even if it meant inventing some new gymnastics tricks to get into parking garages, not even attempting going through drive throughs and having to be extra careful when it came to changing lanes on the highway. Sorry, motorway. Driving on the left turned out to be doable as well given that the streets are designed to accommodate left-handed traffic only and chances are there will be other cars leading the way. The ferry port in Calais is merely 5.5 hours from the KMC and Wiesbaden and 7 hours from Stuttgart. 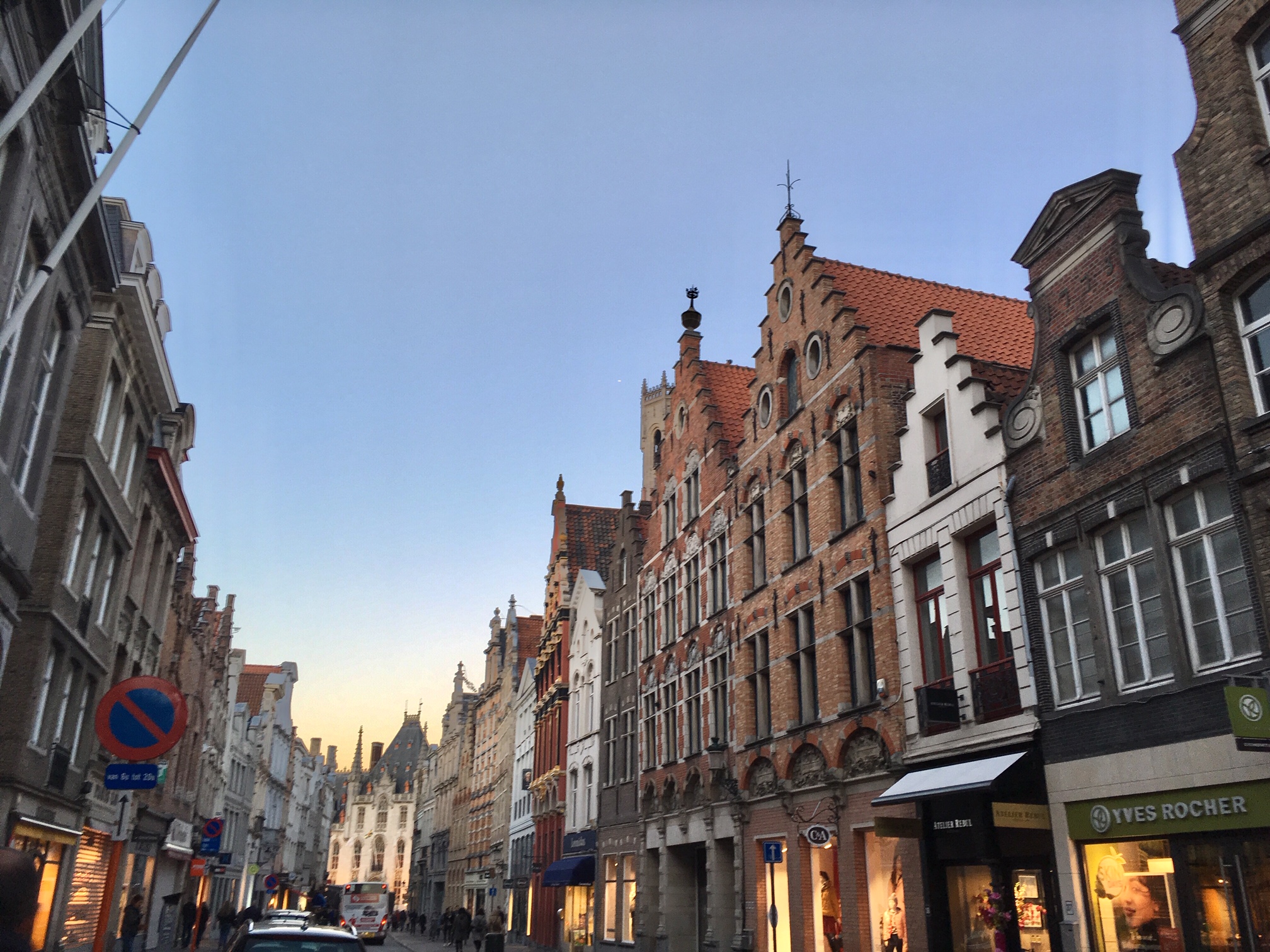 My first stop was Bruges, Belgium. I like chocolate, beer and pretty houses so this was a perfect first stop. Bonus: it’s only an hour from the ferry terminal in Calais and almost no detour at all so it was ideal for a scenic layover and made sure I wasn’t already tired getting on the ferry since I was plenty nervous about driving on the other side of the road.

Bruges is well known for its beautiful architecture, beer and overall romantic and calm atmosphere. It had been on my bucket list for years and I’m happy to say that it did not disappoint. I walked along the canals, went into one Chocolaterie after the other and admired the colorful architecture while stuffing my face with fries, frites, and waffles, gauffres. It also happened to be the day of the world cup finale, which meant the streets were quite empty as everyone was packed into sports bars and cafés to watch the game. The cobble stoned alleys and smooth water along with the sound of horseshoes and carriages made me forget all about the anxieties of the months of preparation and sent me on that ferry perfectly calm and at peace with the knowledge that it would be a while until I got back to my old, familiar routine back home.

Getting There: Bruges is a circa 4-hour drive from Wiesbaden and the KMC and 5.5 hours from Stuttgart. 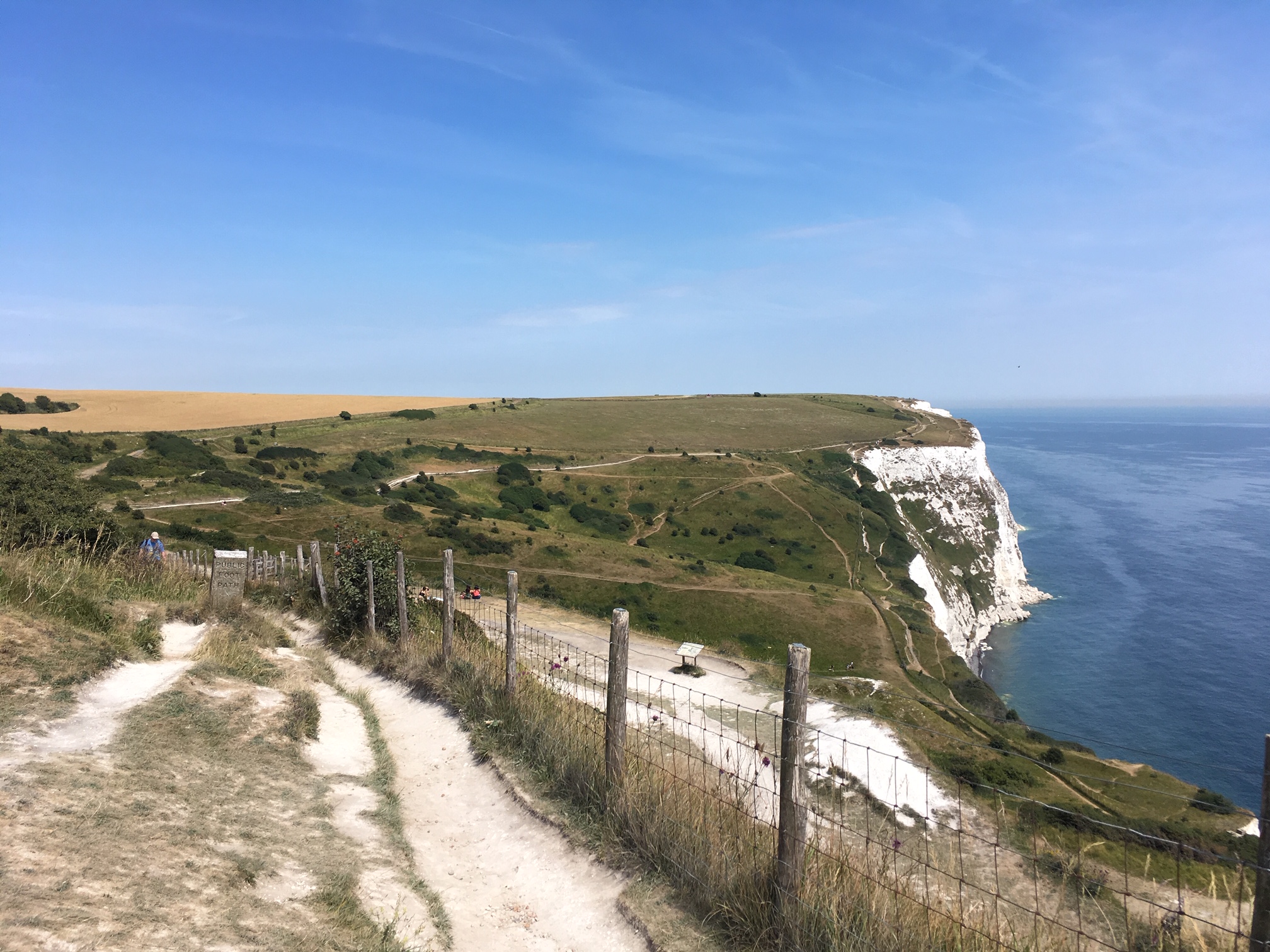 Seeing Dover is pretty much inevitable as the majestical cliffs greet every visitor arriving via ferry and it is simply impossible to resists seeing them up close. There is a parking lot next to the visitor center, which is an excellent place to eat and perhaps grab your first souvenir. The walk along the cliffs appears to be endless and since I’ve never followed it all the way, I can’t say for a fact that it isn’t. About an hour in, you will get to the famous lighthouse, which is open for visitors, but even if you only have half an hour to spare, it’s worth going up there and looking out over the ocean. Legend has it that on a clear day, you can look all the way to France but it is England after all, so maybe don’t hold your breath for that one. Either way, the view is magnificent and I can’t think of a more stunning natural wonder to be welcomed by. 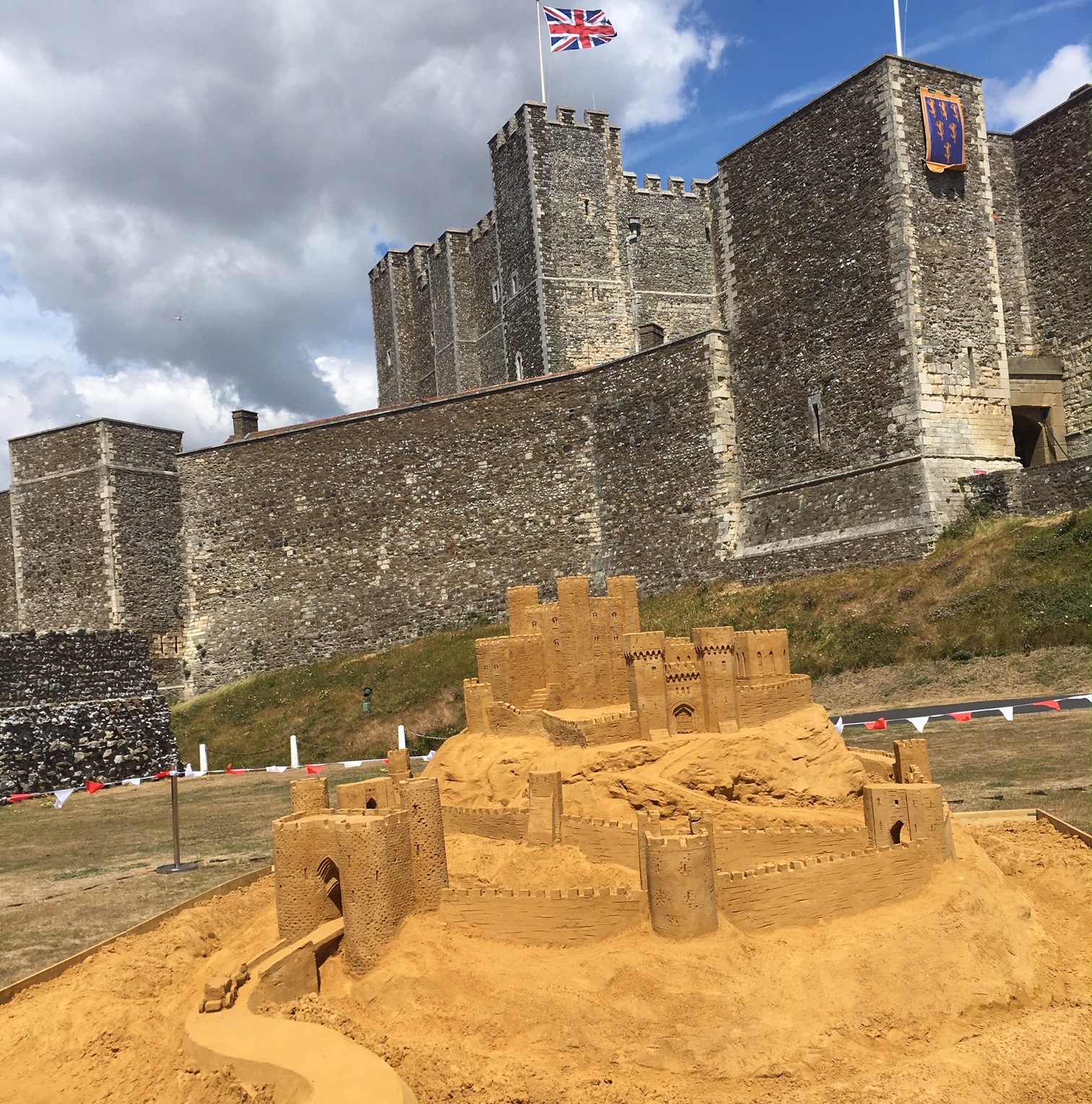 Dover Castle was the first of many, many castles I would visit on the trip and set the bar pretty high for those to follow. It is incredibly well-kept and an absolute attraction for visitors of all ages. The inner tower, a medieval palace, consists of furnished rooms, real fires and costumized guards to tell you more about the history and life on the estate. The outer wall, which became an official military headquarter in WWII, offers fantastic views over the ocean, the city and fields as well as a gripping history. You will also find the oldest surviving lighthouse of the country, one of the oldest in the world, and many medieval tunnels on the site. There is also a multi-media exhibition, an underground military hospital and much more so one can easily spend half a day or more exploring the whole site.

Opening hours: Before April 1, the castle is only open on Saturdays and Sundays, after that it is open every day. 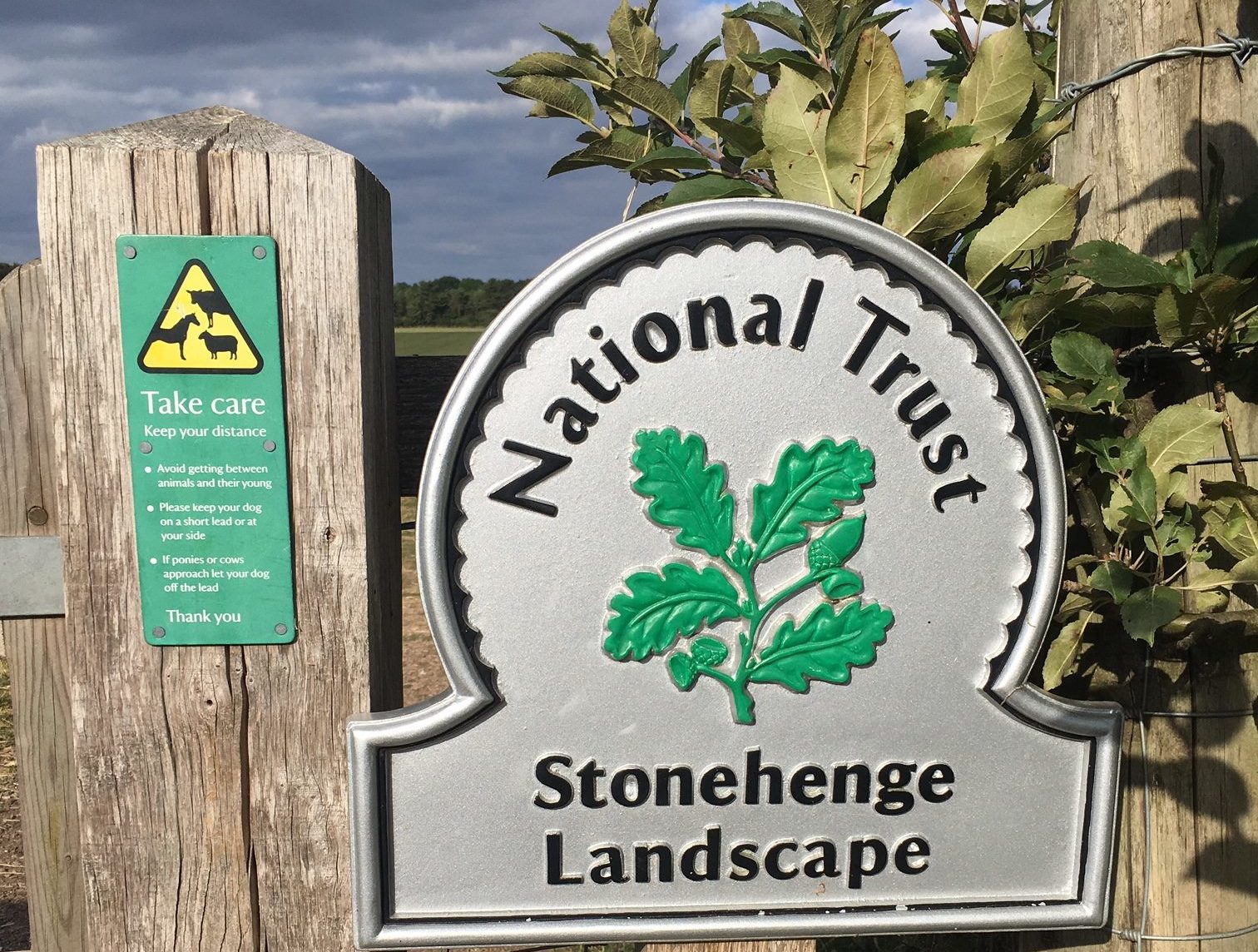 Being in my 6th semester of studying English literature and history, I couldn’t be so close to Stonehenge and not take the detour. By this time, I was joined by a friend and we excitedly parked at the visitor center only to find out that admission costs €20, which we decided we were not willing to pay for a bunch of stones. Luckily, we found out that the walk to the stones (about 20 minutes over green fields with baby cows, so no complaining on our side) is free and while one does not get to be up close as there is a separate fence for those without a ticket, we did get a pretty good view. Years ago, visitors were allowed to touch and even climb the stones but those times are long gone and the preservation of the site is a priority.

There are also sample houses at the visitor center where you can see how the people that threw these infamous parties around the stones lived. To this day, every year on March 31, hundreds of people gather in the very spot where they once feasted and dance all night long. 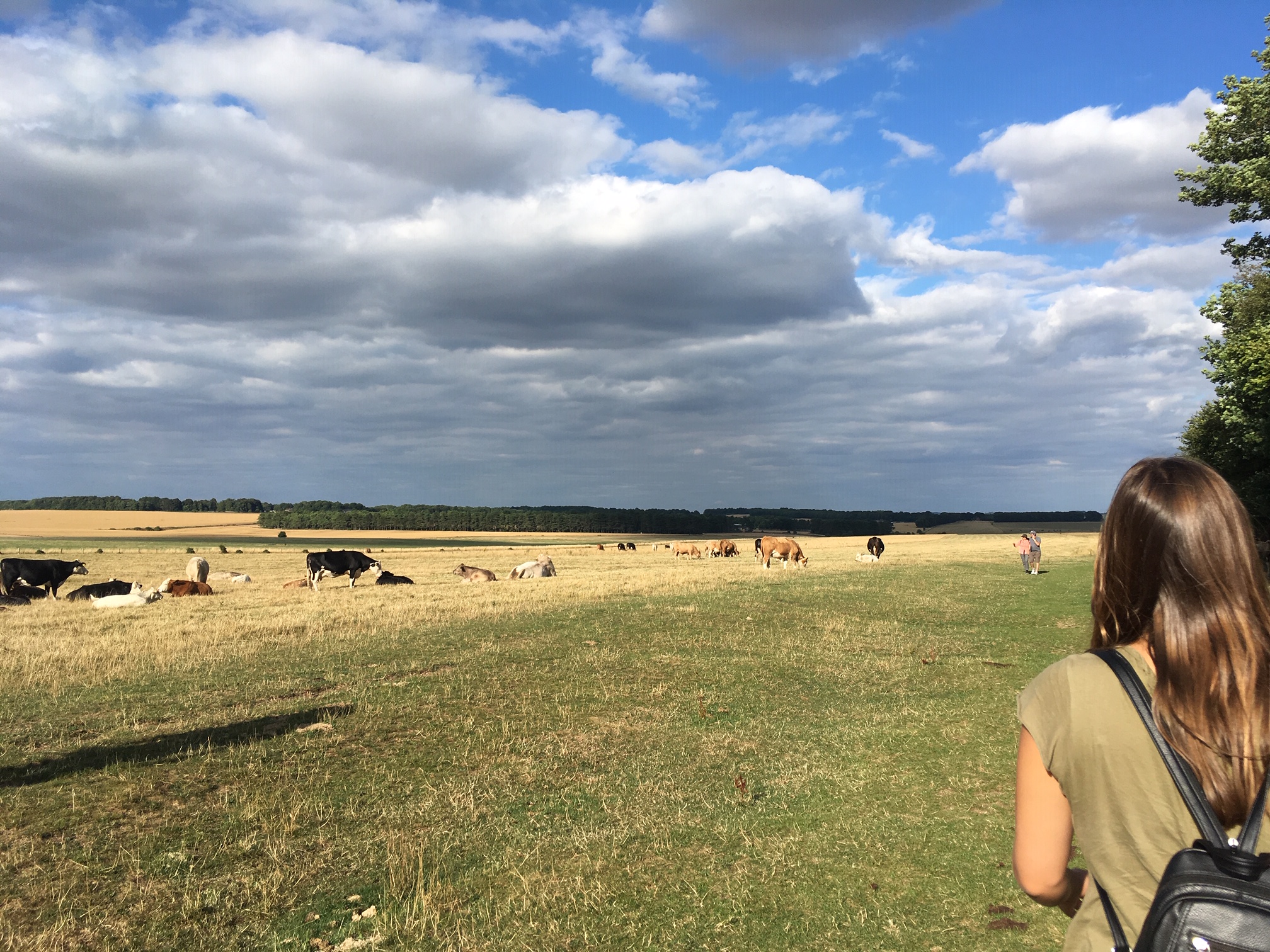 Early signs of activities in the area are estimated at more than 5000 years ago. The stones, that travelled 240km to Wiltshire from South Wales for no known reason, are believed to have been set up in the late Neolithic period about 2500BC; in the early Bronze Age many burial mounds were built nearby. It consists of more than 700 known archaeological features including over over 180 scheduled monuments – henges, timber structures, enclosures and many burial mounds.

There are countless legends surrounding the site as no one knows for certain why, or even exactly how, the stones were set up. One of the more amusing myths is that the rocks were once giants dancing in a circle who suddenly turned into stones, hence the circular formation. Archaeologists found animal skeletons in such large amounts that they are certain the site was accompanied by large feasts. So even if you’re not into history per se, the myths that this site provoked are worth the visit!

Even nowadays, each year for the summer solstice, thousands of visitors gather around the stones to watch the sun set right between two stones as their ancestors are believed to have done thousands of years ago. 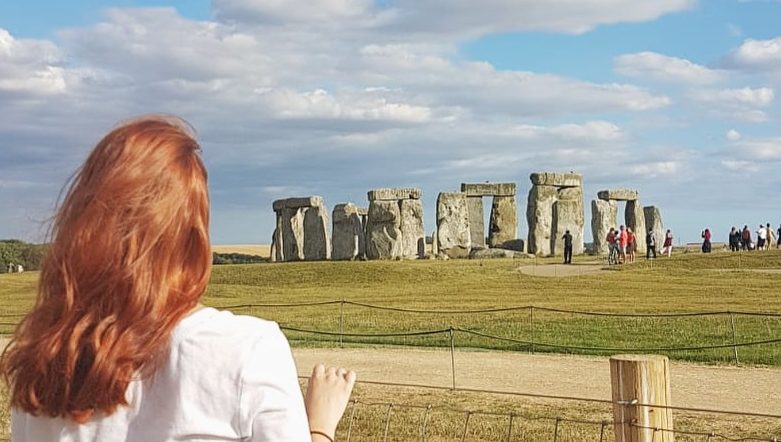 If you want to see the exhibition and learn more about the history of the site, which is ultimately a big mystery, though quite fascinating, you either need to get a ticket after all or pick up a book in the gift shop.

Getting There: if you’re not driving, the closest airport is Bristol. There are Ryanair flights from Cologne from €10 each way. If you are driving, it’s just under 3 hours from Dover and takes you through the “Surrey Hills Area of Outstanding Natural Beauty”, so it’s quite a nice trip!

Check back in next Thursday to find out where else my adventure took me.