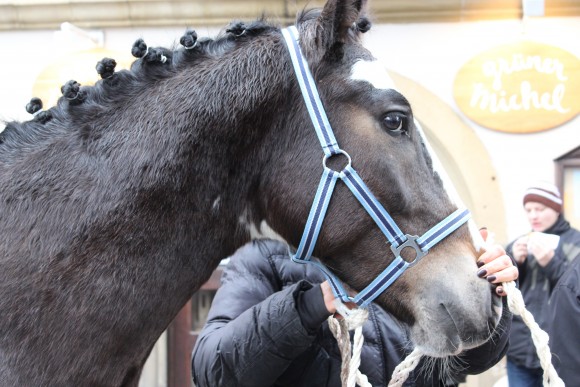 Every second Tuesday of the month of February, the town of Leonberg comes alive with horses of every color shape or size and so much more. After growing up on a horse farm and hearing about the horse market two years in a row, this year I had to see what the festivities were all about. 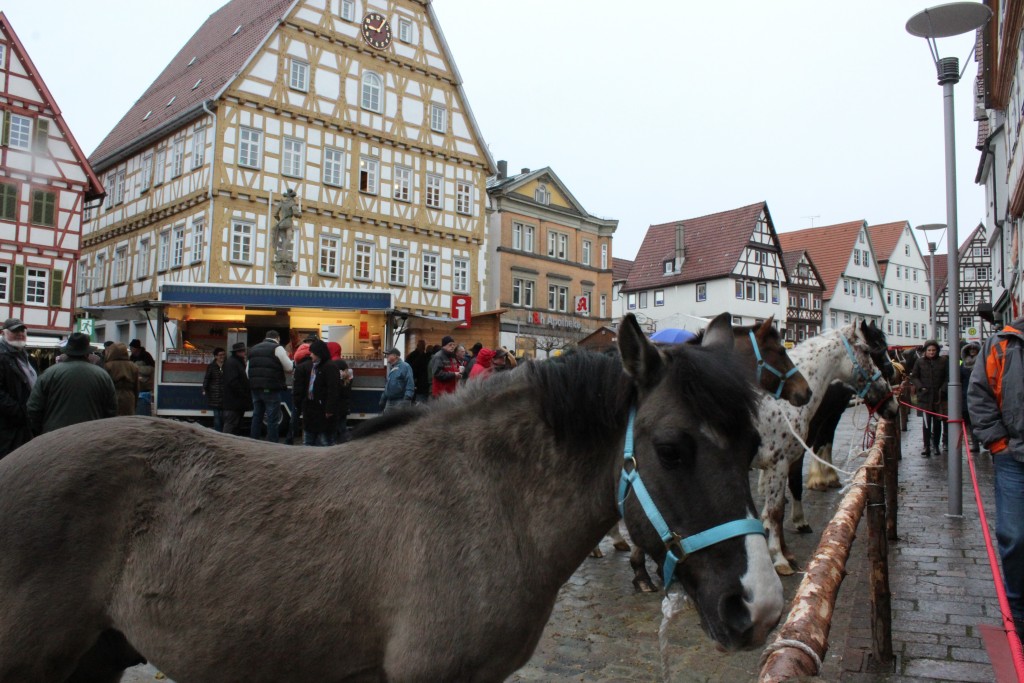 Celebrating its 325th year in 2016, the horse market drew visitors from all over Europe. Regardless of  what the weather draws up, some people are never deterred from attending this popular event. A friend recently said to me, “I’m so glad Germany rarely ever cancels events due to rain or weather, I don’t want to miss a thing!” 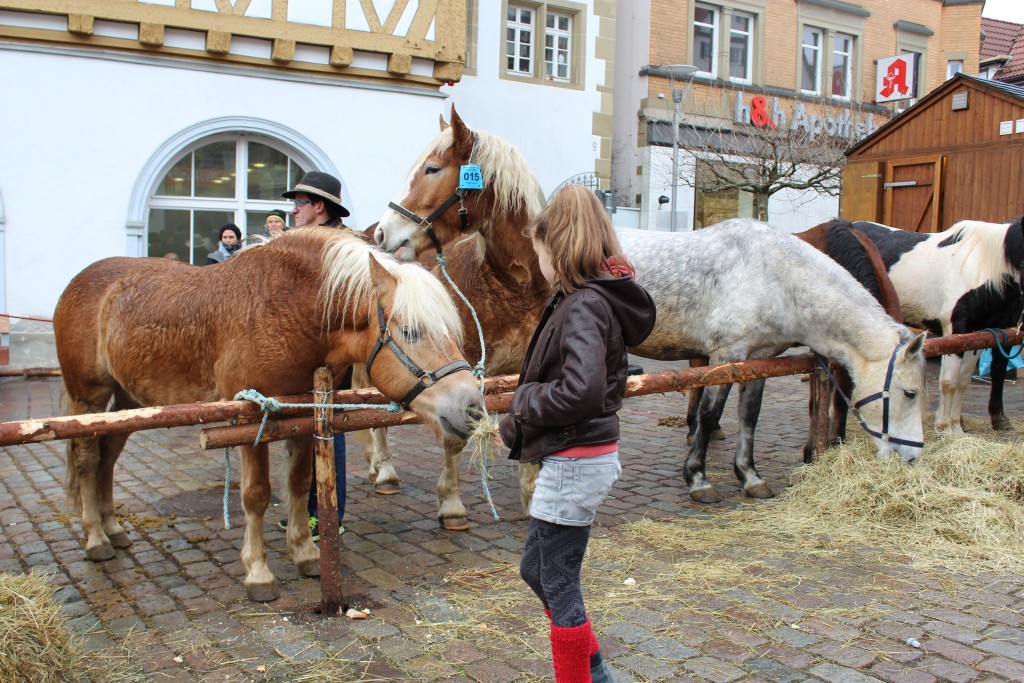 I went on the last day of the “Pferdemarkt” (Horse Market), which also happened to be the day of the Festumzug (Children’s Fasching Parade). If you missed this week-long celebration this year, you will have the chance to catch it in 2017. The event also includes art exhibits, theatrical performances, a carnival with rides, horse and dog competitions, parades and more. 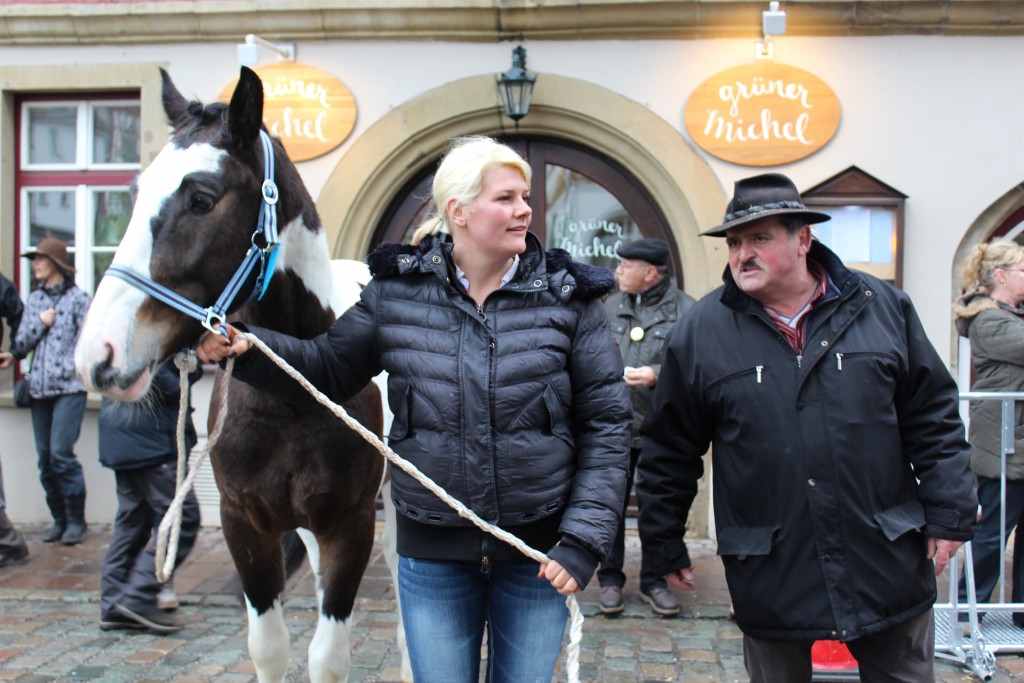 When my friends Mark and Cyndi invited me to their house in Leonberg for a bird’s eye view of the events, I jumped at the chance. I was also hoping for a tour of their amazing house, and I was granted one!

Their “sitting room” has a magnificent oil painting on the ceiling of the 16th century astronomer and mathematician Johannes Kepler. 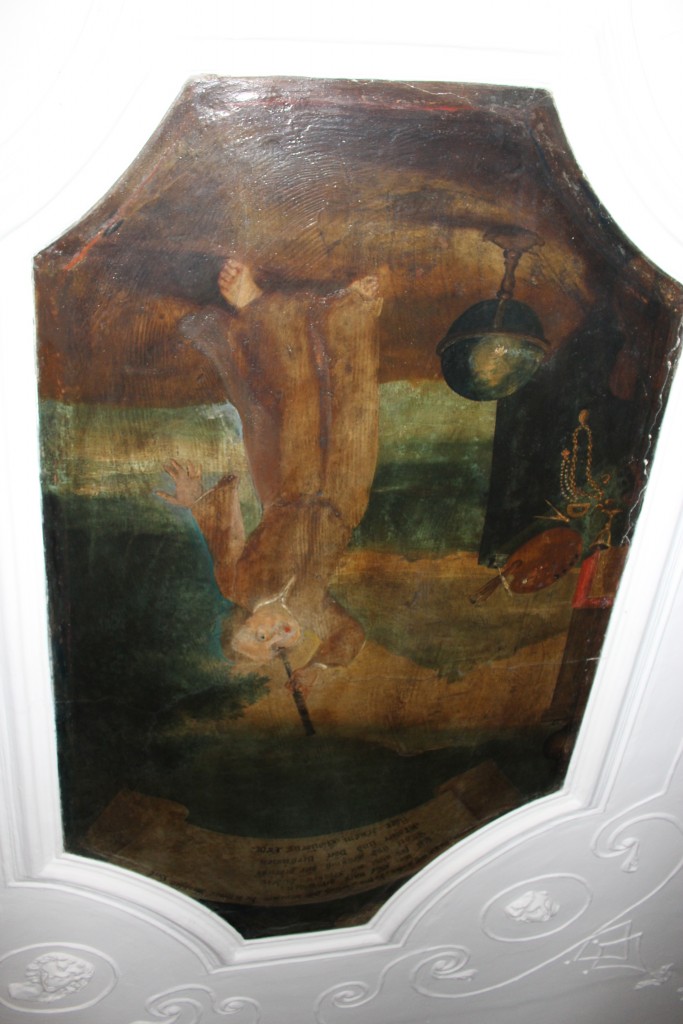 I could sense the nobility of this once obviously prominent home. And that was only one room. I’m sure if those old walls could talk… 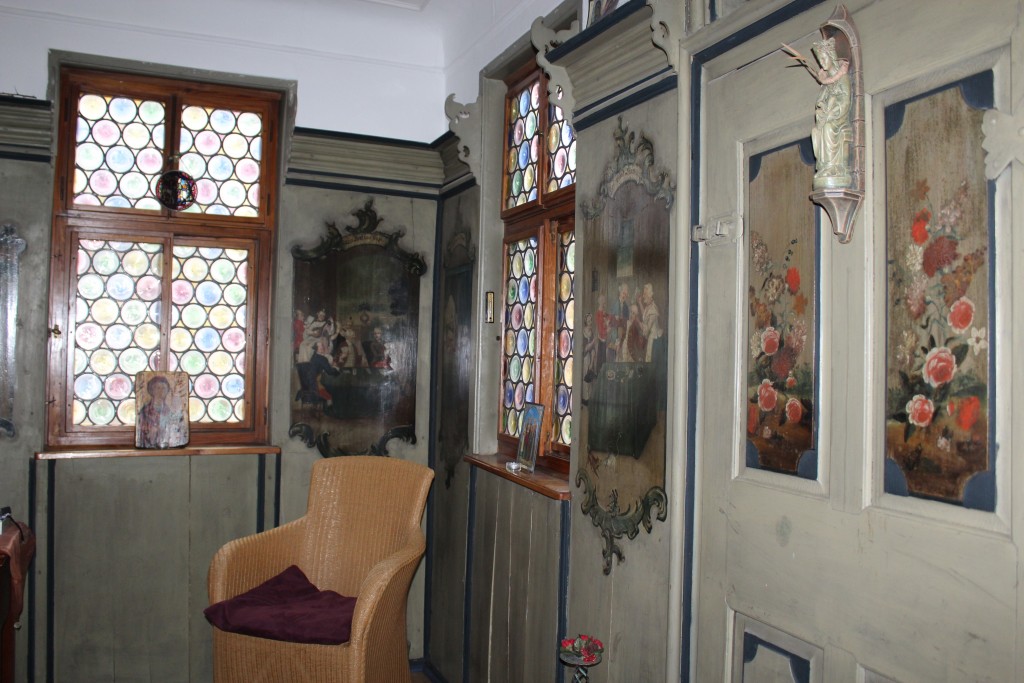 I was so jealous and pea-green with envy for their luck in finding such a gem of a house in the heartbeat of a lovely historic city. You are surrounded by half-timbered houses, fountains, small stores, churches and cobblestone when walking the streets of Leonberg. And in this close-knit community everyone knows each other in their favorite restaurants and “Stubes” (local pubs).

Mark and Cyndi also had amazing views of the marketplace. 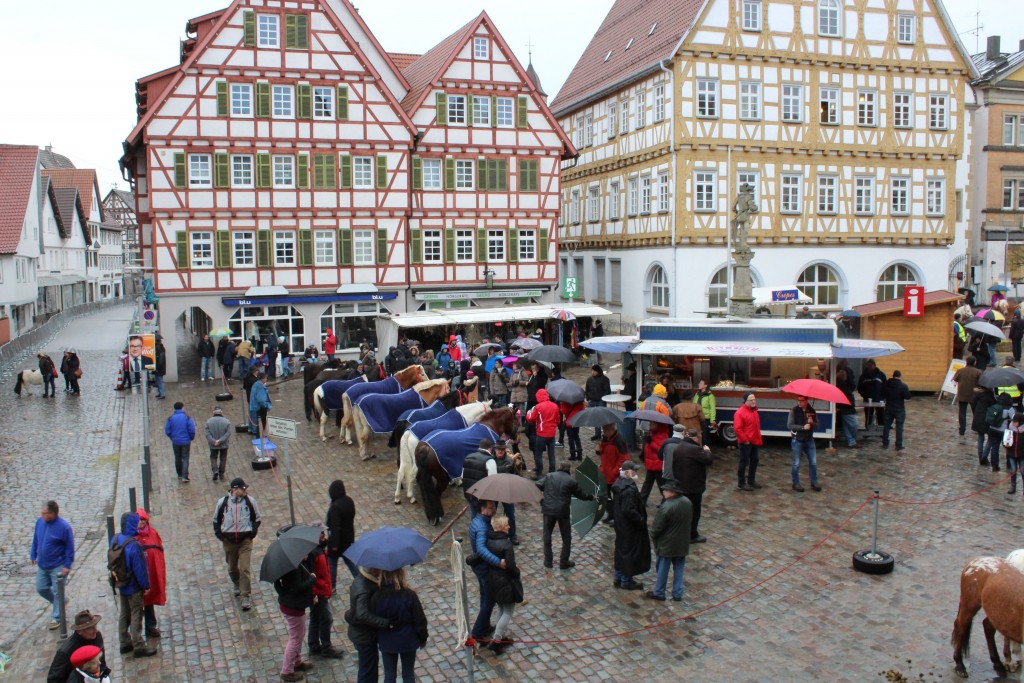 A visit to this romantic town makes a delightful day-trip for all who are in the Stuttgart.

Today’s visit to the horse market was super special. The town square was filled with children, ponies, and food kiosks with Glühwein, beer, brats and fries. If you arrive at the horse market first, there is an “i” information booth right in the center with English brochures and maps with itineraries. This was helpful for the entire day that was filled with numerous of events. 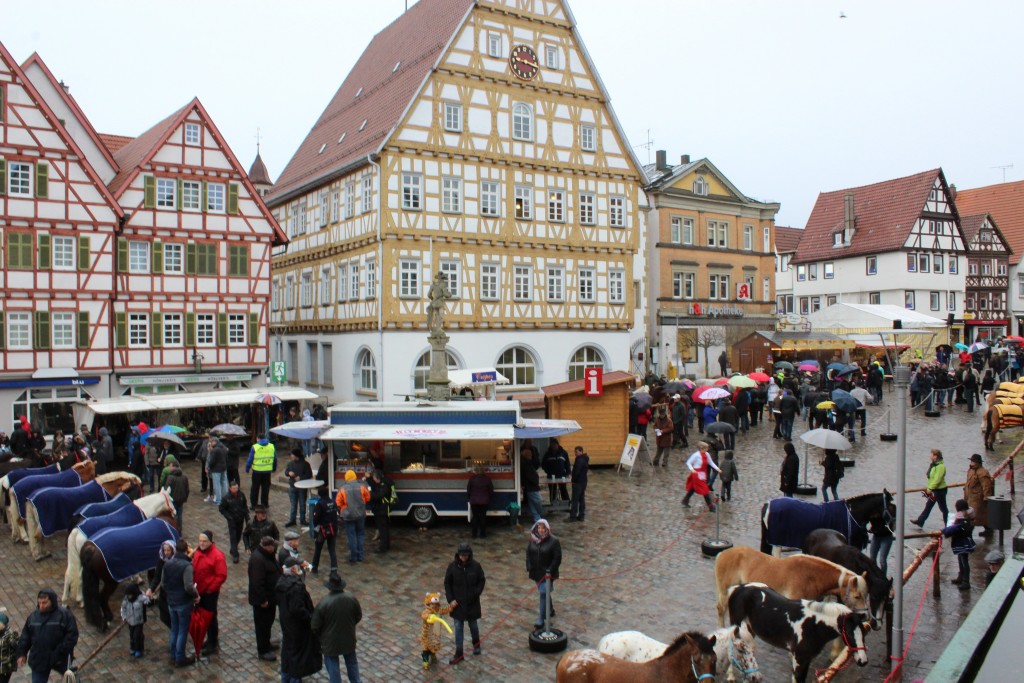 When I arrived around 9 a.m., they were beginning the large horse competition (Großpferde mit Prämiering) followed by the horse handlers competition. With horses loosely tied to stands and walking about freely, I caution you to be super careful where you step, especially if you have little ones.

Because the horses were big, I needed to move quickly no matter how good of a photo “shot” I wanted. By the way, “VORSICHT!” which means “CAUTION!”can often loudly be heard. In my case it also meant to MOVE and to watch out from stepping into something quite unpleasant. 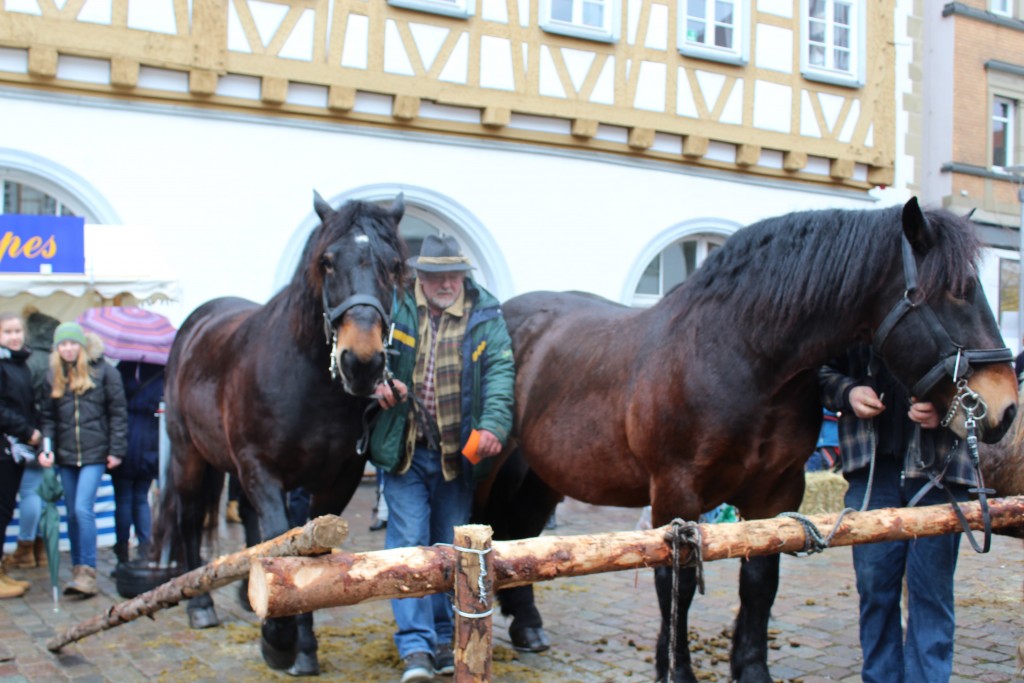 Although there were families with strollers, I wouldn’t say this is a super-friendly stroller pushing event because of the amount of cobblestone. And with the event held in February, it’s a bit chilly and a lot of walking is required with the carnival and flea market. So make sure you wear warm clothes and stay bundled up.

Parking is super tricky due to the closing of major roads that enter into the old town. The best place I found to park was near the Altstadt, but you need to arrive early before it fills up. If you don’t want to face the crowd, you can also park at the Leobad central parking and take a free shuttle bus service to the Leocenter. 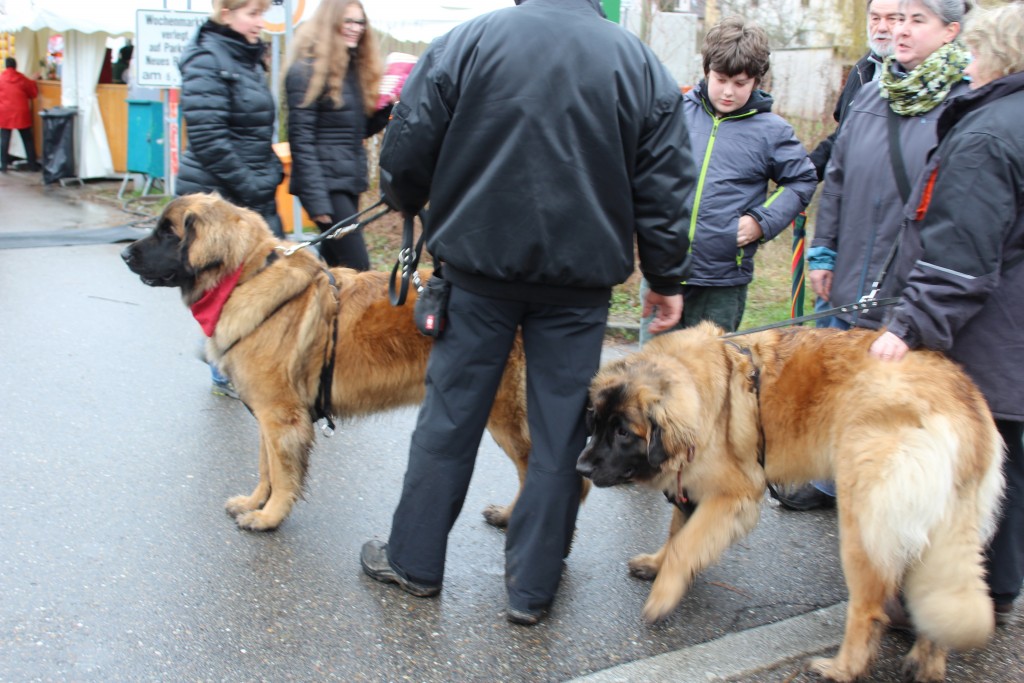 If you’ve been in Germany for five minutes, you know the Germans are all about their dogs. Another claim to fame for Leonberg is their puppies called the Leonbergers. Filled with such pride, the dog owners paraded these special dogs through the town. You will truly be in for a treat if you have never seen these lion-faced looking sweet dogs before.

The Leonberger is a very large muscular canine that was first bred by Heinrich Essing in 1846 with a cross of Newfoundland, St. Bernard and the Great Pyrenees. His goal was to create a breed that would resemble a lion.

Leonbergers have been owned by many royal families like Napoleon II of France, the Prince of Wales, Emperor Napoleon II, just to name a few. With only a few dogs remaining, during the World Wars these special dogs almost became extinct.

In 1945 Leonbergers were saved and bred again and they were then imported to the United States in the 1970s. Today this special breed is used as a herder on farms, search and rescue, and of course as a family treasure. Aren’t the Leonbergers cute? They can really like you too, trust me! 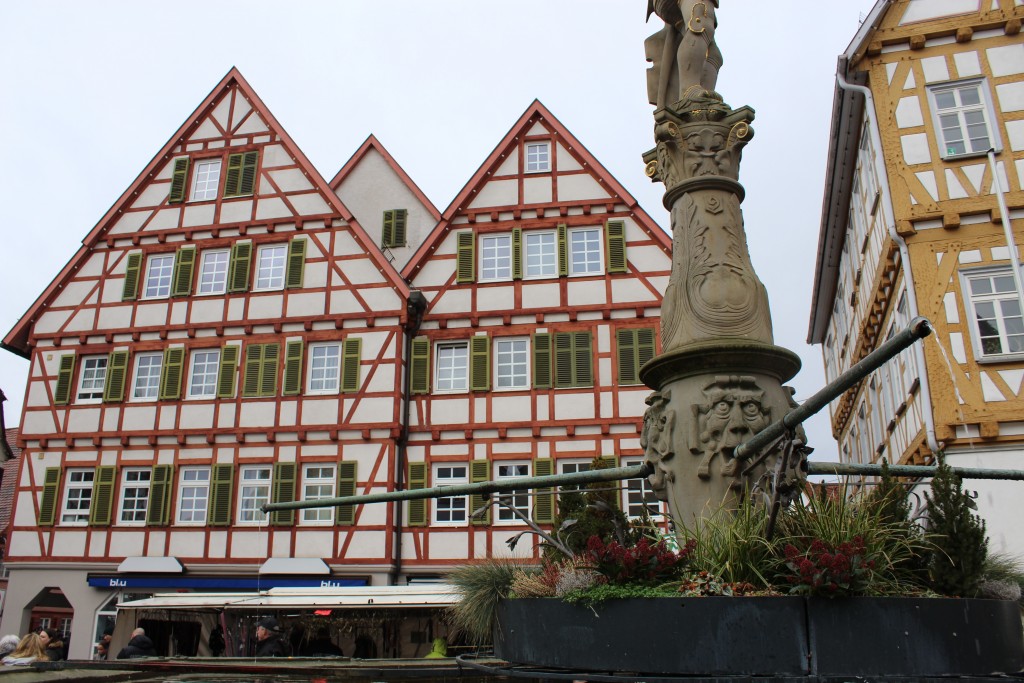 The descriptive walking town map comes with detailed historical information as well as the website is loaded with additional information. Established around 920, Leonberg has an especially interesting and unique history including the Protestant Reform, the Franciscan Monastery, witch trials as well as the childhood home of Johannes Kepler. These are a few of the highlights, so you’ll have to take the tour to find out more. 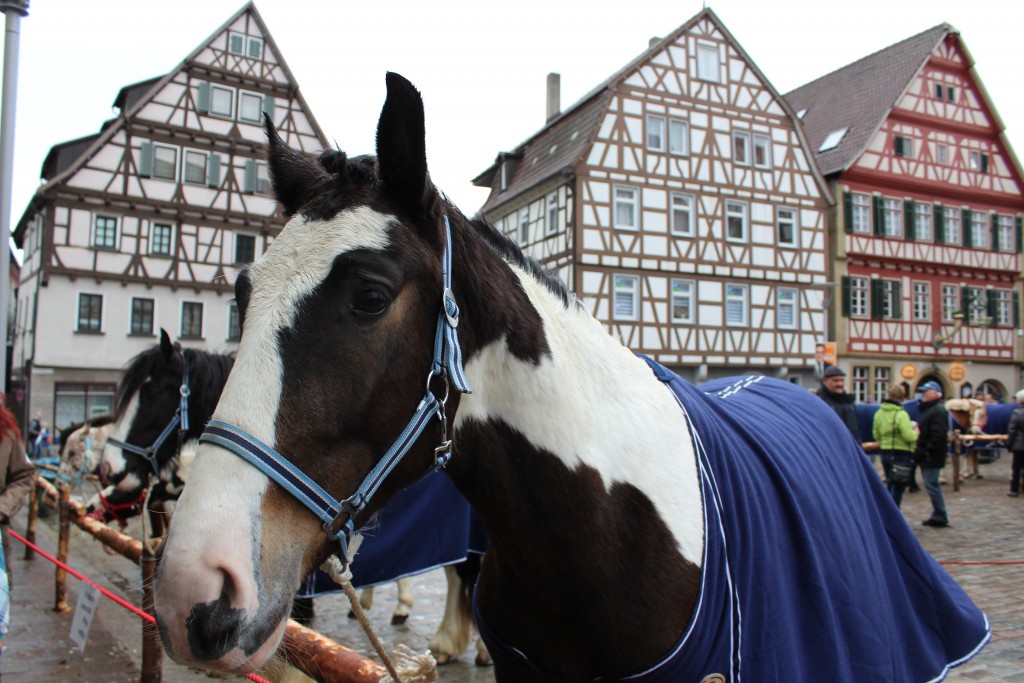 The drive to Leonberg is approximately 25 minutes west of Stuttgart, 2 hours southeast of Kaiserslautern and 2 hours south of Wiesbaden. Click on DB Bahn for train information.