The clock on the 16th Century bell tower tolls twelve, mid day, Bong, Bong, Bong. The last chime fades away and, sitting under the clock, in the village square, I begin to doze off in the summer sun. But the peace is soon broken again as the clock begins a slow repeat. ‘What’s that?’ I ask Claude, the mayor. ‘Why does it ring twice?’ ‘In case you missed it the first time’, he replies. ‘But which is the right time, the first or second set of peals?’ I persist. Claude leans back, Zen like, ‘The silence in the middle.’ 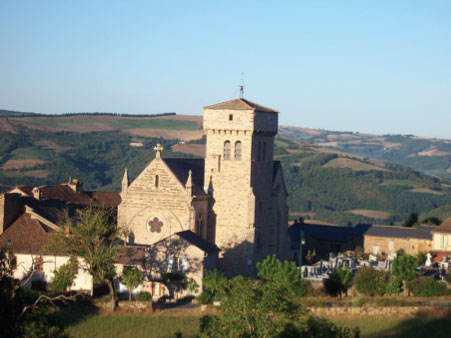 We are in the Aveyron, South West France, an area of simple pleasures, of fresh food and fabulous wine and unspoiled vistas of fields and forests, hills and valleys made fertile by the rivers coursing through them. With a faint but insistent hunger reminding us that it’s lunch time, we wander into the village bistro and enjoy a delicious lunch, moules and frites for me, for my companions, succulent duck breast, with a pitcher of wine thrown in, bien sur.

The Aveyron is one of the most authentic, unspoiled regions of France, home of Roquefort cheese, ‘the king of cheeses and the cheese of kings.’ This is a rural, largely farming area that still lives in rhythm with the seasons but has moved with the times. It is a cultural bedrock, with its ancient villages and lingering customs, with the church dominating the village and families gathering for all the major Christian festivals. But it has also embraced modernity, with abundant markets offering regional specialities as well as baskets and pottery, clothes and belts and bags and pots and hats and bedspreads; a cornucopia of anything you could want to buy. 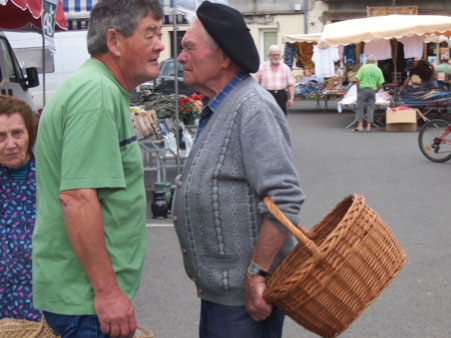 Seen something they want?

Our local market at St. Affrique has, it is true, a few commercial sellers of fruit and vegetables imported from Spain and elsewhere but most of the stallholders are local farmers and producers. There is Marie, selling the chickens, rabbits and guinea fowl she has bred, raised, slaughtered and plucked not ten miles from the village. Libero, the handsome baker with a revolving door ushering in and out the best looking girls in the region, has bought a field above Martrin where he grows the wheat to make the bio bread he bakes every Thursday and sells on Saturday at the market. Wrap it in a torchon, a clean, damp, dishcloth and it will last, if not forever, at least until the next market, and, he proclaims, a bit self-righteously, without the need for preservatives.

Less uprightly bio is baker Fred. He produces fouace, the area’s answer to brioche, a large, circular sweet bread with a hole in the middle like a huge, oversized doughnut. You won’t find fouace outside the Aveyron. But then you are unlikely, either, to meet farsous, the spinach based flat cake with an unexpected row of prunes running through the middle. Regional food is original, seasonal and transforms everything that is to hand into unusual, striking dishes. 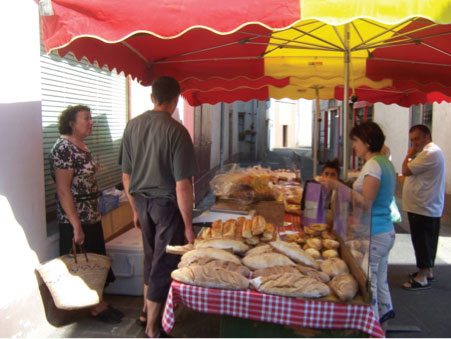 Baker Fred and his Buns

Booking.com
he farmers and landowners are now affluent and their businesses international, selling cheese and meat, poultry and foie gras far beyond the Aveyron’s own borders. The region has exported some of its best chefs, too, and you are likely to meet an Aveyronais in many of Paris’s better bistros. But this was once a poor region, landlocked and reliant on what was to hand. Look all around you and admire the chestnut forests that patchwork the landscape. The tree yielded a crop that served as a vegetable, a roast nut, a sweetmeat, a jam, a cordial; and the chestnut tree also provided wood to burn and the hard, sustainable beams and planks that are found in all the old houses of the region.

I first tumbled across the Aveyron twelve years ago, with the romantic idea lurking in my mind that I might, perhaps, buy a house, experience a different culture and get to know the French way of life. I have been here ever since and have introduced both personal guests and those who have rented my house for their holidays to the beauties of a region they have quickly grown to love.

Martrin, the village where my house is situated, is a few miles North of the road that runs between the fabulous Mediaeval city of Albi and Millau, warm gateway to the South with its magnificent viaduct soaring above the valley. 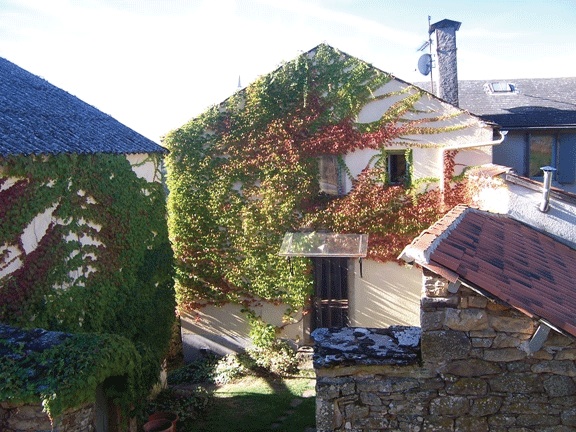 Until the advent first of the bicycle, then of the car, my local community was inward turned and wholly self sufficient. The terrain is undulating and wandering far afield took too much time for farmers and their workers whose lives were controlled by the demands of their flocks and crops. Now, though, the villagers have been joined by incomers from Paris and Nimes, from Lille,  London and Wales, each of us bringing with us a touch of the outside world to enrich our adopted home. If we arrive speaking a couple of French words we are immediately embraced into the heart of the community and it doesn’t take long to acquire a basic vocabulary of polite greeting or request. 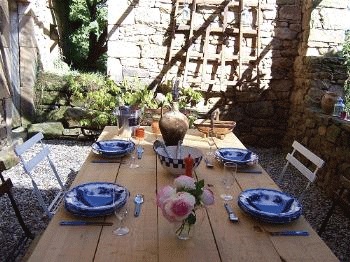 In the old days travelling to a village twenty kilometres away was a day excursion by horse and cart. Albi’s magnificent Cathedrale de Ste. Cecile, every centimetre of its interior painted in trompe l’oeil and frescoes literally putting the fear of God into the beholder, was beyond the reach of any but the most nomadic adventurers of this region. Now, cruising slowly along the banks of the river Tarn, then into the three disused railway tunnels that plunge through the hillside, you pass through Ambialet, one of France’s designated most beautiful villages. Its ancient Romanesque priory is often the scene of summer concerts, the sound of Russian male voices, or the boom of the organ bouncing down the hill towards the river. Or drive in the opposite direction along the Tarn towards Brousse le Chateau, another acclaimed French beauty, and admire the old stone buildings leading up streets where no cars have ever passed towards the 13th century fortified chateau looming over the village. Gaze up as you sip a welcome Pernod, or beer if you must, from the terrace in front of the hostelry where the chef is whipping you up a delicious lunch of steak with Rocquefort sauce or, for the brave amongst you, a salad of gesiers – chicken gizzards. 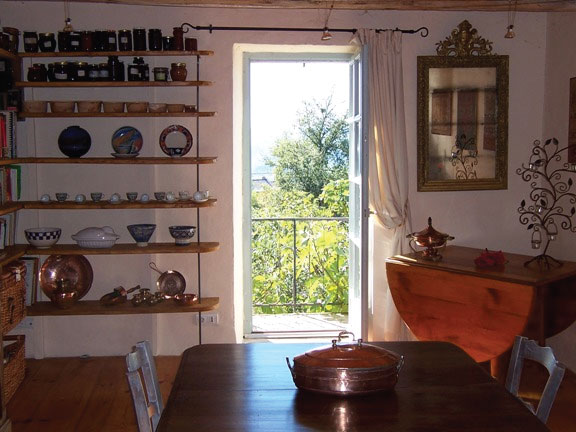 Then return to La Bourdique, your holiday home from home, to enjoy, as the sun sets, the fabulous views towards the south, across the valley to the fields and forests in the distance. If you are very quiet, there may be a family of rabbits close by, probably feasting on new grass shoots or the tender buds of the rose bushes. It’s their land too and there is space here in the Aveyron for us all. 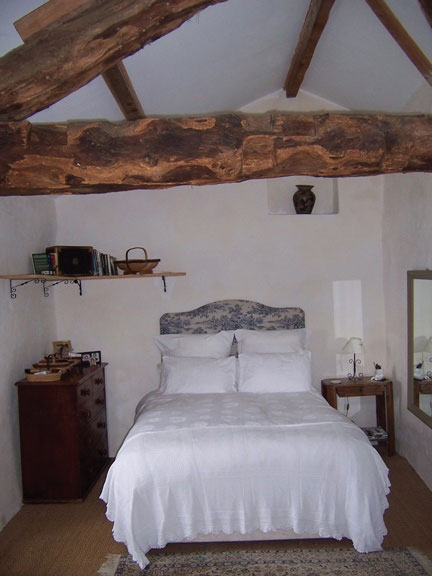 The house is Mediaeval, its first footprint planted on the soil in the 16th Century, at the same time as the Knights Hospitalier constructed the tower where the clock now hangs. Originally built as a  peasant farmer’s cottage, the house was extended twice in the 19th Century and modernised twelve years ago to provide three bath/shower rooms for the three double bedrooms that are available to rent. Comforable and cosy, it retains its ancient charm but is bang up to date with a well equipped kitchen, a dining room with a door leading to a Juliet balcony from which you can drink in the view and a sejour, living room where you can relax and listen to music or watch the television which beams in English language programmes from around the world. It is the perfect place to experience life in the French countryside, whilst being accessible to surrounding villages and cities which will cast you back into a leisured past, unhurried and serene. There is no lovelier place in France than the Aveyron.

Author Profile:
Sharon Colback is a journalist who divides her time between this beautiful medieval farm house in South West France, Cape Town (South Africa), where she teaches English writing courses and London (UK). To discover more about renting this beautiful farmhouse for your family vacation visit  http://www.labourdique.co.uk