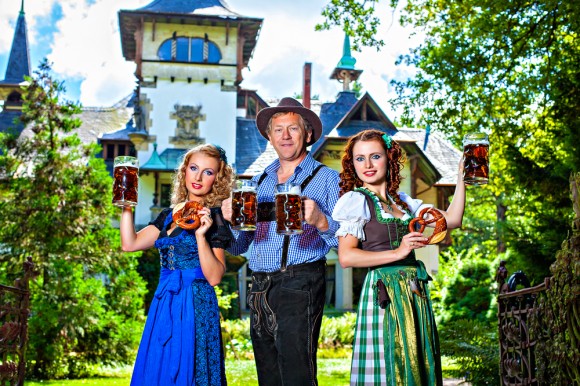 You’ve been meaning to add new words to your German vocabulary, want to get to know key parts of Bavarian culture or you’re simply looking to learn some fun facts about Bavaria? Look no further, as this article will provide you with all kinds of general and niche knowledge on this special German state, and it’s even organized alphabetically.

Altstadt – This is a term for Old Town, a historical downtown that many older German cities have. These are often full of gorgeous, historical buildings from different eras but you’ll commonly find timber-frame structures in German Old Towns. Some of Bavaria’s Old Towns are even part of UNESCO World Heritage, like Bamberg’s Altstadt, or have been used as locations for Hollywood movies, like the one in Rothenburg ob der Tauber.

Brezel – Pretzels (German singular: Brezel, plural: Brezeln / Brezen) have long conquered international markets, so chances are you had one or two in your life before you went to Germany for the first time. But, as Germans will reassure you, pretzels in Germany are much better than pretzels abroad. The most common type of pretzel you’ll find at every bakery is a lye pretzel (Laugenbrezel), the salty, hearty kind. Another popular type (traditionally eaten plain or with butter a day after New Year’s for example) is a sweet pretzel made from yeast dough, called Hefebrezel.

Christkindlesmarkt Nürnberg – This is what Nuremberg’s huge Christmas Market is called, the literal translation would be Christ Child’s Market. It’s one of Germany’s biggest Christmas Markets, with 180 booths welcoming over 2 Million visitors every year. Even if you’ve seen a couple of German Christmas Markets, this one is still an outstanding experience.

Dirndl – A Dirndl is a traditional catholic costume for women, created in 19th century Bavaria and Austria. Nowadays, it’s widely seen as a traditional costume for Alpine regions, which brings me to an important point: Not all German women ever wear a Dirndl, but very few do so on a day-to-day basis. Since the 1990s it’s become popular to wear modern versions of it to Bavarian and Southern German folk festivals, the original Dirndl however were much heavier in fabric, more high-necked and often floor-length. The bow on the Dirndl’s apron can symbolize the wearer’s relationship status: a bow tied on her right side can symbolize that she’s taken or married, a bow tied on her left side can mean that she’s single.

Gerupfter – Gerupfter (literal meaning, probably referring to its texture: the one that’s plucked), more commonly known as Obazda, is a traditional Bavarian cheese delicacy. The main ingredients are soft aged cheese (usually Camembert or Romadur), butter, a small amount of beer, paprika powder, salt, pepper, and optionally onions or cream cheese. It’s typically eaten as a spread on pretzels and you’ll find it at lots of Bavarian Beer gardens.

Heimat – Heimat can be translated to homeland, a place that you feel deeply connected to and call your home even when you’ve moved. Bavarians seem to have an especially strong rootedness in their state and culture, often seeing themselves as “Bavarian, not German”, something other German states would perhaps describe as being overly proud of one’s home state.

Isar – The Isar is a river that flows through parts of Austria and Bavaria. Anything bigger than a raft isn’t allowed to frequent this river, but it has still become quite the tourist attraction. There’s a 25km raft channel from Wolfratshausen to Munich, frequented by large rafts that are furnished with tables to have a snack at. Another hotspot along the Isar is the so-called Eisbachwelle (Eisbach wave) near Prinzregentenstraße, where professional surfers can ride some waves without having to leave the city. Click here to find out more about what you can do while you’re in Munich.

Jodeln – Yodeling is a form of singing without words, often produced by repeating meaningless syllables and rapidly changing between lower and higher pitches (click on the link for a short example). It is an old, mostly rural singing tradition local to the German and French Alpine regions, the Bavarian, Harz and Thuringian Forest as well as some Austrian regions. The most common yodeling melodies can be traced back to the 18th, 19th and 20th century. Nowadays, yodeling is mostly present in folk music (see Volksmusik).

Kirchweih – Kirchweih means parish fair, a folk festival originating from Medieval times when citizens came together to celebrate the consecration of a church in town. Historically, many German regions began to celebrate a more general and not church specific Kirchweih once a year to avoid the numerous church festivals that would’ve otherwise taken place all over the year. These days, there are manifold regional varieties within Germany and their names vary – these are the most common ones you might hear: Kirmes, Kerwe, Kerwa, Kärwa, Kirb, Kerb.

Lederhosen – This is the male equivalent of a Dirndl, a traditional German garment for men. Although leather breeches were widely used as a sort of work uniform in many countries and different German regions, Bavarian King Ludwig the II and the Bavarian noble family Wittelsbach took liking to the idea of regionally varied, traditional costumes during the Romantic period. Leather breeches became more popular over time and reached their height as the most popular boys’ and men’s garment in Germany and Austria during the years following the second World War, replaced only later by jeans. Lederhosen are scarcely worn on an everyday basis these days, but you’ll see them at lots of Bavarian folk festivals.

Maß – Maß is short for Maßkrug, a handled glass vessel used to drink beer out of. You’ll find these at every Southern German Beer garden and folk festival, but Bavaria’s Oktoberfest is especially overflowing with them. The modern Maß holds a little over a liter of beer and often bears the brewery’s logo. If you’ve never drunk from a Maß before, you might be surprised by its weight: an empty glass weighs 2.9lb (1.3kg) and a full one weighs about 5.3lb, so get ready for sore arms! The world record in Maßkrugstemmen (Steinholding) is about 45 minutes.

Nürnberger Opernball – Nuremberg’s annual opera ball is famous for attracting lovers of classical music as well as lots of celebrities, models, and entrepreneurs. With tickets starting at 169€ per person, this is a rather pricy event but still fun to watch on TV. In the past, Nuremberg has also hosted a parallel open-air event with free admission where you could get traditional Bavarian food and have some fun away from the extravagant crowds.

Oktoberfest (Wiesn) – Oktoberfest, also known as Wiesn (a regional word for meadow), takes place in Munich annually and is the world’s biggest folk festival. The first Oktoberfest was hosted in 1810 and it’s only become more popular since then, attracting more than six million visitors each year. Because Oktoberfest is so immensely popular, planning ahead is key if you want to attend – we recommend starting to plan a year ahead! Click here for a summary of the most important things to know, or here for an experience report.

Prinzregententorte – This tongue twister translates to ‘prince regent’s tarte’ and it’s about as fancy as it sounds. The tarte was created to honor 19th century Bavarian Prince Regent Luitpold and is traditionally made out of eight very thin sponge cake bases, symbolizing the eight Bavarian administrative districts that existed until 1946. They’re covered with a delicious layer of dark chocolate. Prinzregententorte is said to be to Munich, what the infamous Sachertorte is to Vienna.

Quartel / Quartl – You’ve already encountered the Maß, this is part two of Bavarian words for alcohol measurements. A Quartel, sometimes spelled without the e, is usually a quarter of a liter of beer, but it can also be used to refer to a quarter liter of wine.

Residenz Würzburg – The residence in Würzburg is just one of the many Bavarian castles that are part of UNESCO World Heritage, although UNESCO apparently justified its inclusion by saying that it’s the most coherent and extraordinary of all baroque castles. The 18th century residence is known for its stunning ceiling fresco by Venetian painter Tiepolo and its many magnificently decorated halls. Should you ever visit Würzburg, this sight has to be on your list!

Schäuferla – Schäuferla (or sometimes Schäufele) are a southern German traditional food. Its preparation can vary but in Bavaria’s Franconia region this dish is made from a pig’s shoulder meat into which the cook will carve a crisscross pattern. The meat is then seasoned with salt, pepper, and caraway and pot-roasted for two to three hours with root vegetables, onions and a bit of dark beer. When it’s done, the meat should be very soft and easily slide off the bone.

Tegernsee – Tegernsee is a popular vacation spot in southern Bavaria, a crystal-clear lake encircled by the Alps. There’s lots of things to do near Tegernsee if you’re into sports: hiking, moutain biking, swimming, sailing, fishing, and much more. If you’re looking for a more relaxed stay you can go on a scenic walk or enjoy what is, in my humble opinion as a beer lover, Bavaria’s best beer, a Tegernseer.

Unterfranken – Unterfranken is the region of Lower Franconia, located in Northern Bavaria. It is mostly known for its good beer and wine which originates in the vineyards located along the sunny riverside. Locals thus sometimes call it Weinfranken (Wine Franconia) or Mainfranken after the river Main (pronounced like mine). Lower Franconia is also home to many beautiful and historic cities worth a visit, such as Aschaffenburg, Miltenberg, or Würzburg.

Volksmusik – This is something many Germans associate with Bavaria: folk music. Although folk music lovers tend to distance themselves from the cheesier Schlager music, it’s still what most people attribute to this genre. Volksmusik, but especially Schlager (literally: hit, meaning: a type of catchy pop music, usually about love or relationships) are frequently played at folk festivals like Oktoberfest. Click here for an example of Schlager that many Germans will claim to dislike but still passionately dance to when it does get played.

Weißwurstfrühstück – Weißwurstfrühstück is one of those really long German words for something amazing: a traditional Bavarian breakfast including Weißwürste (‘white’ veal sausages), pretzels, sweet mustard and beer. Although the name literally says that it’s a breakfast, it’s more common to have this as a small lunch or snack, for example at a Beer Garden. It does, however, seem to work wonders after a night with too many Maß beer.

Xaver und sein außerirdischer Freund (1986) – Full disclaimer: It was very hard to find something Bavarian starting with an X and since I stumbled upon this odd movie, you’ll have to bear with me. Xaver und sein außerirdischer Freund means ‘Xaver and his extraterrestrial friend’ and it’s a Bavarian science fiction movie from the 80s, sentimentally filmed in an idealized regional setting. It’s the Bavarian “E.T.” if you will, but with much stranger accents. I personally found the trailer very confusing but the movie seems to have at least some pop cultural significance in Bavaria.

Y — to be honest, we couldn’t find anything for Y so we’re counting on You to let us know Your favorite German word that starts with a Y.

Zugereiste(r) – This word is Bavarian for someone who isn’t local to Bavaria, the literal translation means ‘someone who’s travelled or moved here’. Zugereiste is the female form, Zugereister is the male form.