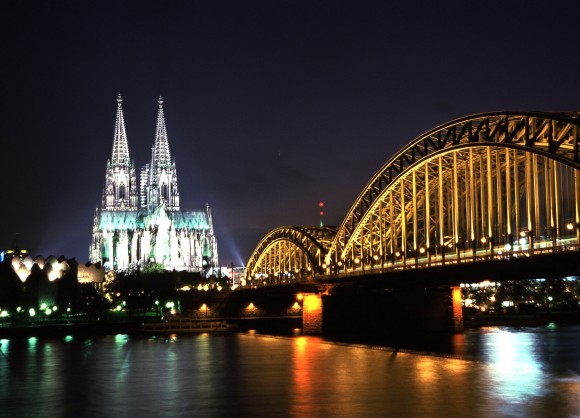 A Guide to Cologne (Köln)

Cologne (Köln) is a beautiful city on the Rhine River with a skyline boasting the famous Cologne Cathedral as its distinguishing feature (called the Kölner Dom in German).

Colonia (meaning “colony” in Latin) was founded by the Romans in 50 A.D. Now known as Cologne in English and Köln in German, it is the 4th largest German city with about one million inhabitants. However, it seems much smaller because all the city highlights are within walking distance of each other.

We had tickets for the Ballet Revolución performance at the Cologne Philharmonic. It featured modern dance with a touch of ballet using a combination of hot music, sensuality, athleticism and pure energy to keep the audience glued to their moves. A variety of music played by their own band included many No. 1 hits by Shakira, Usher, J Lo, Beyoncé, Ricky Martin and more. The ovations were long, loud and mostly standing. It was a blast! We couldn’t keep from tapping our feet and bobbing our heads in unison and in time to the music. Fortunately they will be playing other venues in Germany and beyond.  Check out their website at www.ballet-revolucion.de/en.

After the show we cruised around the pedestrian zone dominated by the Cologne Cathedral, a Roman Catholic Church built in Gothic style. According to Wikipedia, the cathedral is the largest Gothic church in Northern Europe and has the second-tallest spires and largest façade of any church in the world. Construction started in 1248, and it was basically finished in 1880 and is said to be Germany’s most visited landmark. It is a beautiful both day and night – a must see! 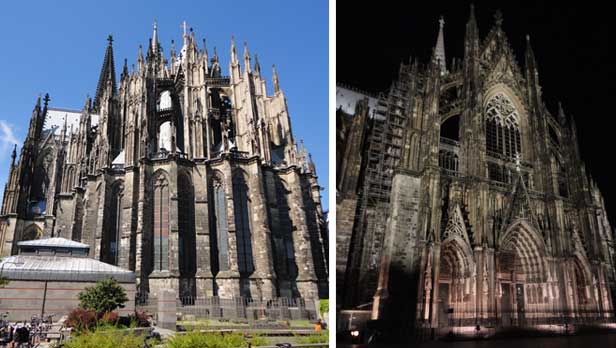 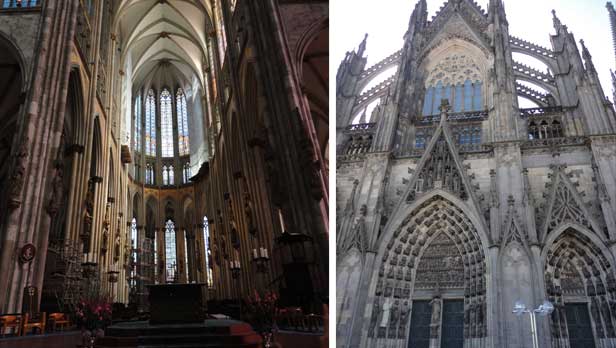 There seems to be an endless choice of restaurants all in one place with people of all ages strolling, dining and pub crawling in the evening. We chose Ristorante Collina’s am Dom (www.collinas.de) a small, cozy Italian restaurant close to the cathedral. We enjoyed excellent pasta, fabulous fish, and delicious, superbly grilled beef tenderloin. Oh yes, you shouldn’t forget their large selection of excellent Italian wines. With wine and bottled water plus 2 courses, it was about €50 per person. Not cheap, but the quality is worth it. We would definitely return!

Another great choice with local German food and beer is Restaurant Früh am Dom. This local favorite consists of a restaurant, a brewery and a brewery cellar/bar. The menus are in English and the traditional German favorites are outstanding. We recommend the Rheinischer Sauerbraten (beef marinated for at least 24 hours and cooked til it falls apart) or the Schweinhaxe (pork knuckles which are oven baked and served with a huge bone and skin included). And you absolutely have to try the local beer, known as Kölsch (pronounced “kuhlsh”) and named after the local dialect. They say that Kölsch is the only language you can also drink!

If you are interested in museums, there are two right next to the cathedral. The Römisch-Germanisches Museum (Roman-German Museum) contains interesting artifacts of ancient Roman and German culture. Or, if you prefer modern art, try the Museum Ludwig. 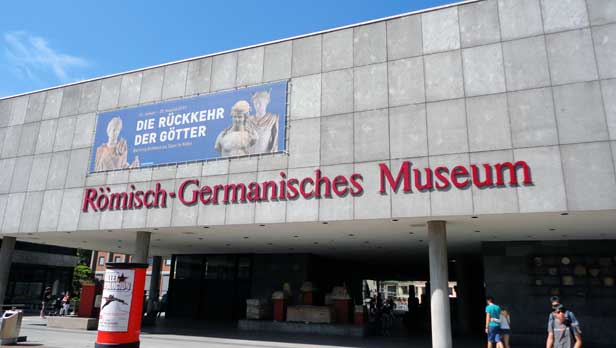 If you still have time to kill and you are fortuante to have picked a good-weather day, you can get a boat ride on the Rhine – the river is only a couple hundred meters away from the famous Dom. 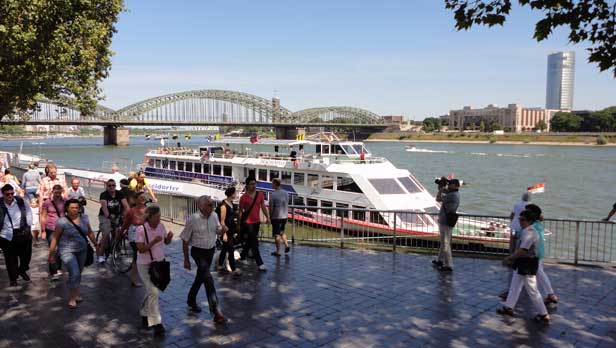 Cologne is also famous for Eau de Cologne called Kölnisch Wasser or Water of Cologne by the Germans. The most well known Eau de Cologne for Americans is probably No. 4711, which is the original and first manufactured in the early 1700s under the family name Farina. There was a dispute over the name, and it was decided to use the house number given to the factory at Glockengasse. This is when it became No. 4711. You can still find it in Cologne! The museum offers guided tours and lets you compose your very own fragrance. Unfortnuately, the place is under construction until November 2017 but their flagship store is open all year round and offers exclusive products and deals.

For more photos, check out the album on our Facebook page and Like us to get future updates.

Medieval Bruges is Belgium at its best

4 Things to do in Wiesbaden