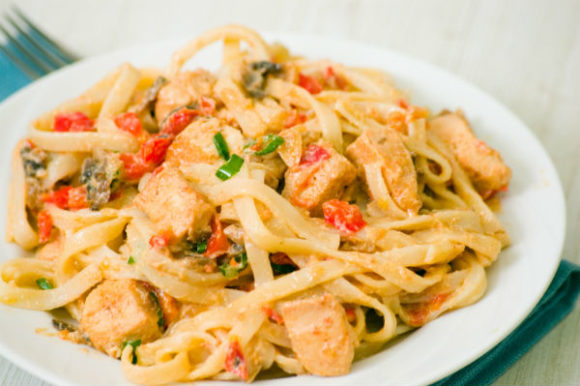 In a Dutch oven pot, heat the oil and roast chicken on all sides. Season with salt, pepper, chili and oregano. Add tomatoes. Roast all for a few minutes. Add cream, broth and water. Once this boils, add pasta. Put in a 180 degree Celsius oven. Allow to cook for 15 minutes, stirring every 5 minutes. Three minutes before penne noodles are done, add the mozzarella and chopped parsley.

A nice side dish is a light summer salad with tomatoes, lettuce and cucumbers. Vinegar and oil dressing is typical for this salad.
The dressing has a touch of salt, sugar and ground white pepper for flavor.