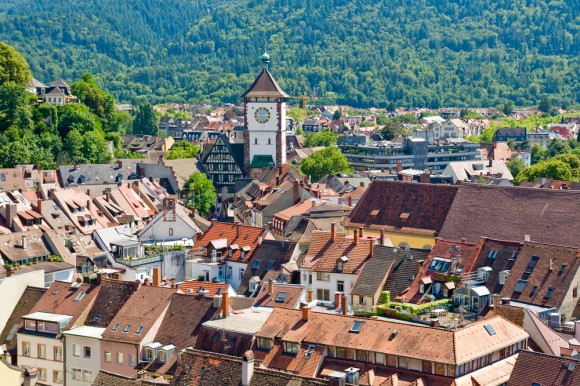 Freiburg lies in the state of Baden-Württemberg, at the border triangle with France and Switzerland, which means it has a rather charming mix of cultures. Freiburg offers historic landmarks, a beautiful Old Town, an elite university, great places to eat, a thriving nightlife and much more.

Situated on the Dreisam River and on the edge of the Black Forest, Freiburg has a population over 240,000 with a total area of 59.10 square miles. It stands at an elevation of 912 feet and holds Germany’s all-time record temperature of 104.4 °F. It’s known for being one of the country’s oldest university towns as well as being in the sunniest corner of the country. Discover more about this beautiful old city… 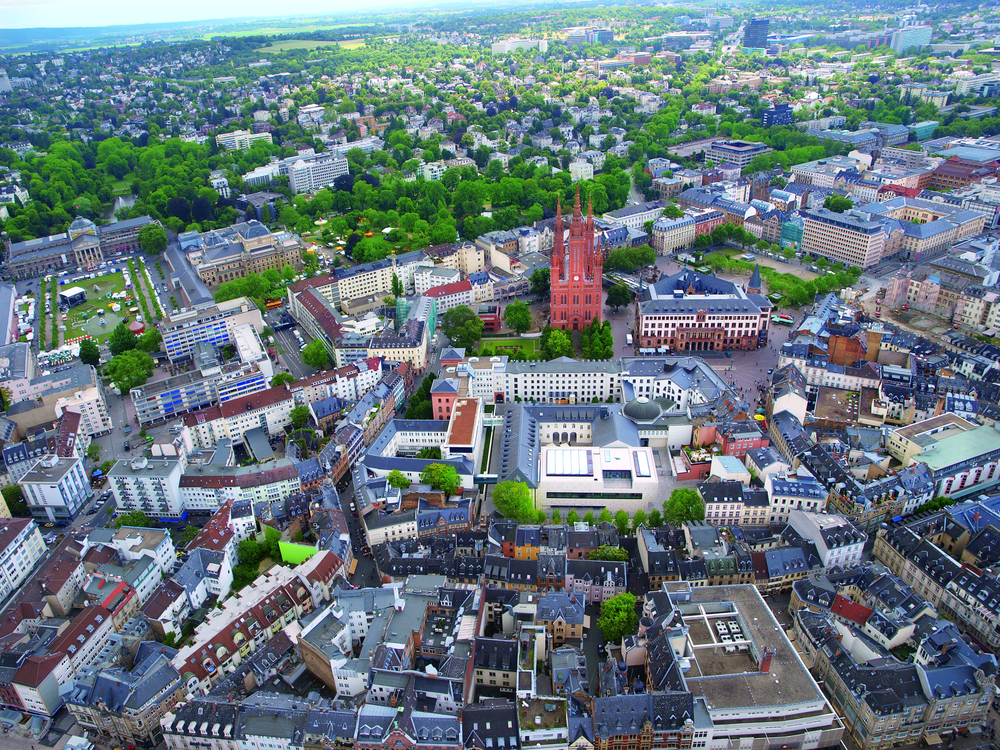 In 1120 Freiburg was founded as a free market town by the Duke Bertold III of Zahringer. Its very name indicates this in literal translation. The word Freiburg means “free” and “fortified town”.

During the 12th century Freiburg was strategic located at the junction of trade routes between the Mediterranean Sea, the North Sea area and the Rhein and Danube rivers. Because of this, the town and its population began to grow under the rule of Bertold V, the last duke of Zähringen.

After Bertold’s death in 1218, the counts of Urach took over the title of Freiburg’s count. Not trusting the new nobles, the city council wrote down its established rights in a document. At the end of the 13th century a feud erupted between the Urach Count Egino II and the citizens as he raised taxes and tried to limit the people’s freedom. The Count, with the help of a powerful family member the Bishop of Strasbourg, led to a devastating defeat for the citizens. Afterwards the people of Freiburg had to pay 300 marks in silver annually to the count until 1368. Finally becoming fed up with their lords, the people of Freiburg bought their independence and turned to the Habsburgs for protection. Under the new rulers, the citizens were able to keep most of their freedoms. After the Habsburgs, the ruling family Schnewlin was in control of city until the guildsmen revolted.

Freiburg had its own silver mines and minted its own coin. It also had facilitated commerce alliance with cities of Basel, Colmar and Breisach from 1377 until the end of the 16th century. The city became one of the richest cities in Europe until the silver dwindled at the end of the 14th century. Freiburg then shifted its focus from mining to becoming a university city. In spite of seeing many other upheavals, Freiburg was able to continue to forge its way into history. 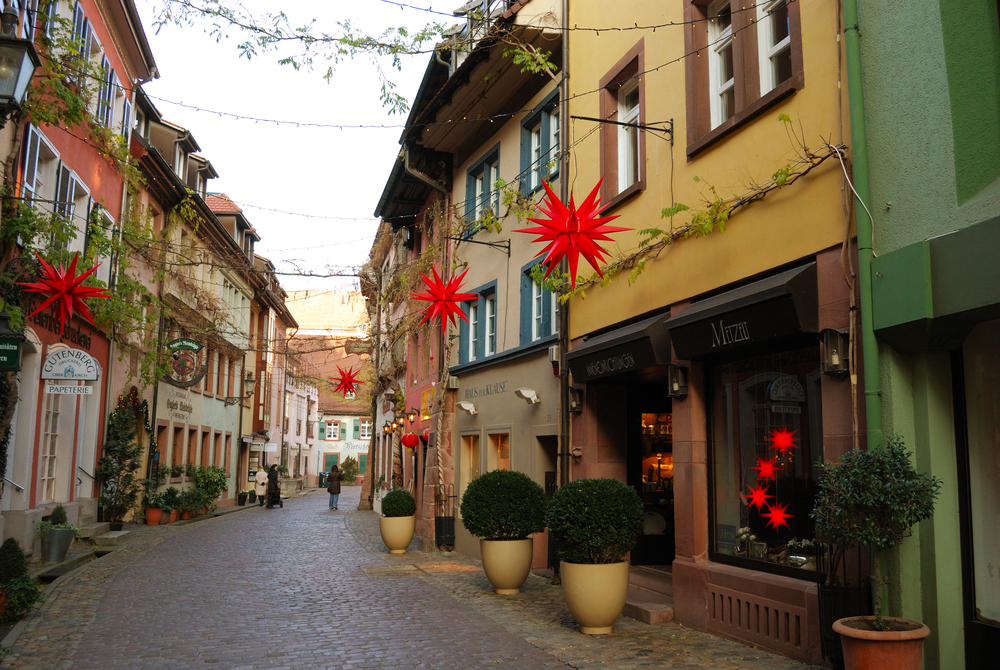 With its squares and historic buildings, Freiburg is best explored by foot. There are many neighborhoods to walk around in the city and the Altstadt (Old Town) is a great place to start with its unique squares and historic landmarks. The shopping streets are where the action is on Saturdays. The residential area best for taking a stroll through is Weihre, which has beautiful old buildings. The student area Stühlinger has a number of small cafes and a charming, self-enclosed village called Gunterstal.

Booking.com
When exploring the city, you will sense a cheerful and bustling vibe of the city, especially in the Old Town. Perhaps one of the reasons is because Freiburg receives more sun than anywhere else in Germany. A main factor contributing to this atmosphere is the charm of the (Old Town and its most most famous landmark of the city, Bächle. Bächle is water-filled runnels (water provided by the Dresiam River) that crisscross most streets and alleyways in the Altstadt. These small canals were once used to fight fires during medieval times. Locals have a saying that if you accidentally fall or step into one, you will marry a Freiburg resident. Other factors that create the beauty of the Old Town include the following:

– Münster Cathedral is one of the oldest and most beautiful cathedrals in Europe. The construction began around 1200 in Romanesque style and continued in 1230 in Gothic style. It has the typical features of stained glass windows, huge hall in addition gargoyles. Its impressive 116-meter tower was completed in 1330, which is the only Gothic church tower in all of Germany. For a small fee you can climb the stairs to the top of the tower for spectacular views of the city. The bishop tombs of the cathedral can be visited for no fee. It’s worth noting that the cathedral survived bombing raids during World War II. 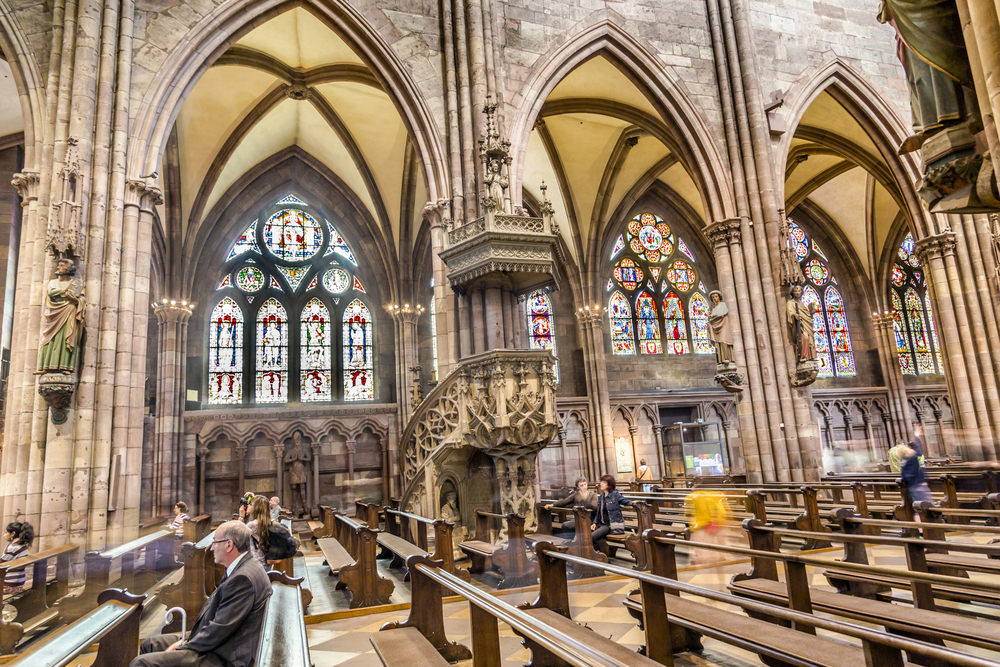 – Cathedral Square is the popular square that has a farmer’s market, which offers some of the best local specialties including sausages and wine. 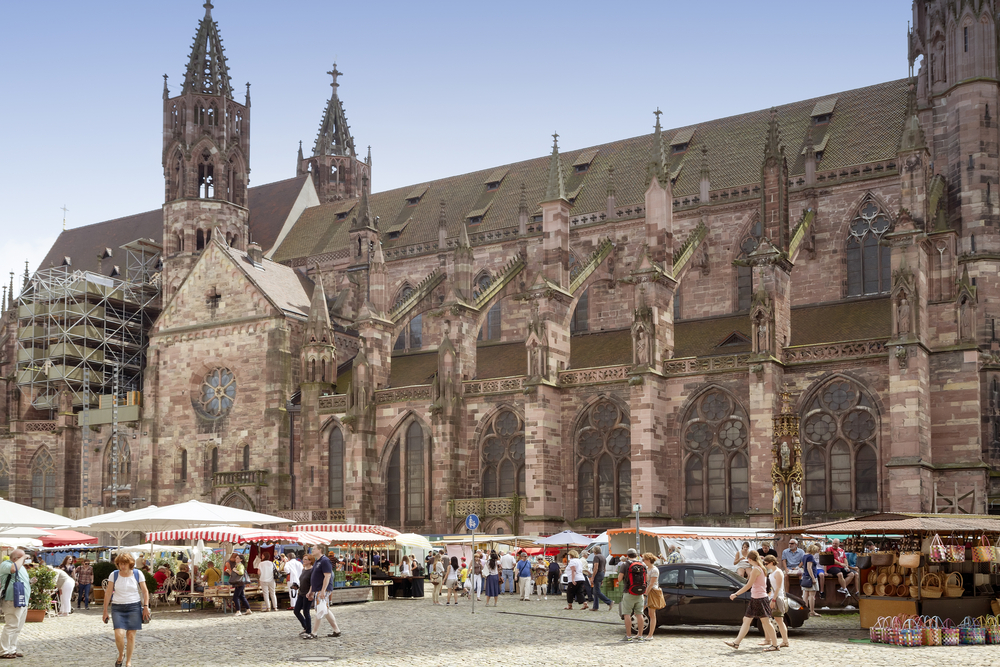 – Historic Merchants Hall (Kaufhaus), is an incredibly beautiful red building decorated with colorful bay windows and statues of four emperors. It was built in 1532.

– Schwabentor (Swabian Gate) is the youngest of the two remaining city gates of the medieval fortification wall. The gate was built initially around 1250, enclosed with a stone wall in 1547 and a stair turret was added in 1572. It remained unchanged until it doubled in height according to the original design of Carl Schäfer in 1900.

– Martintor is the oldest of the two medieval defensive walls. According to research, the wooden beams date back to the year 1202. It is famously known locally for the McDonald’s next door which has put its logo on the gate.

– Augustinermuseum houses an art collection with works ranging from the Middle Ages up to the Baroque period as well as 19th century paintings.

Perhaps other factors that create this Old Town’s atmosphere include the history and culture, lots of cafes and cozy bars, great restaurants, many stores and the laid back atmosphere created by numerous university students.

Freiburg’s university was founded in 1457 by the Habsburg dynasty and is the fifth oldest university in Germany. The approximately 22,000 students come from all around Germany and over 120 other countries. It has a long standing reputation of excellence with its tradition of teaching humanities, social sciences and natural sciences. This elite university also stands amongst Europe’s top research and teaching institutions. 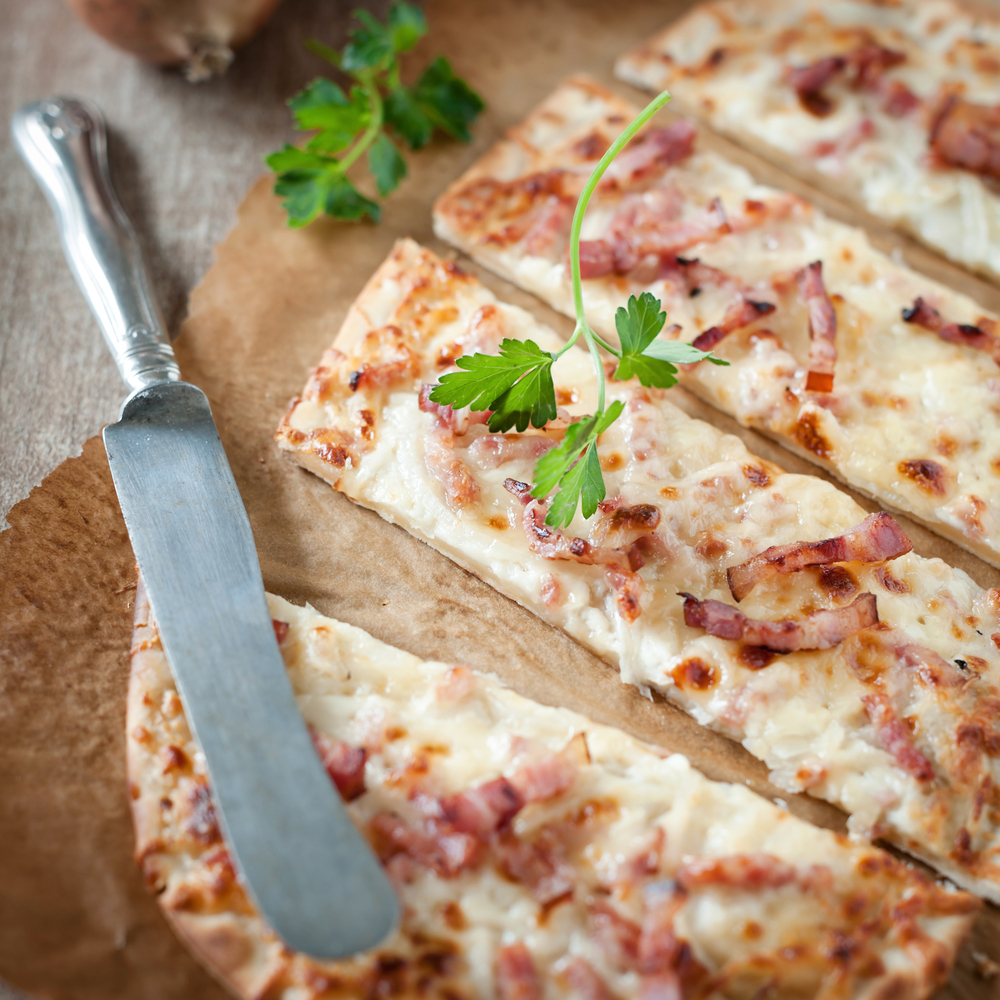 Don’t leave Freiburg without trying the Alsace Flammkuchen speciality- a lightweight pizza-style dish with a crispy thin dough with a range of toppings over a light cream sauce. Or dine at the Schloß Café for an upscale meal. This restaurant was once was an old famous hunting lodge and can be found at the top of a hill. Markthalle food court offers quick and tasty lunch by various food stands around the center. Then there is  Brazil, a restaurant that serves great dishes with chilies, chicken, coconut milk, red curry, fresh salads, French baked cheese and more.

After finding a place to stay in the city at the Freiburg Hostel, the Black Forest Hostel, Schwartzwälderhof (a small hotel) or at the City Hotel, you can then start your night. Make your way to Niemannstrasse (near the university) for great cafes and bars. ASPEKT is a cool bar where students meet up drinks, food and music. Another hang for students is UC-UniCafé, which has some of the best prices for drinks and food. Maria’s is also a great bar with a very appealing interior and has a Happy Hour (8-9 pm) that serves Mojitos and other cocktails – and Monday is Burger Day! Customers can get freshly made tasty burgers, salads and chips for a very reasonable price. 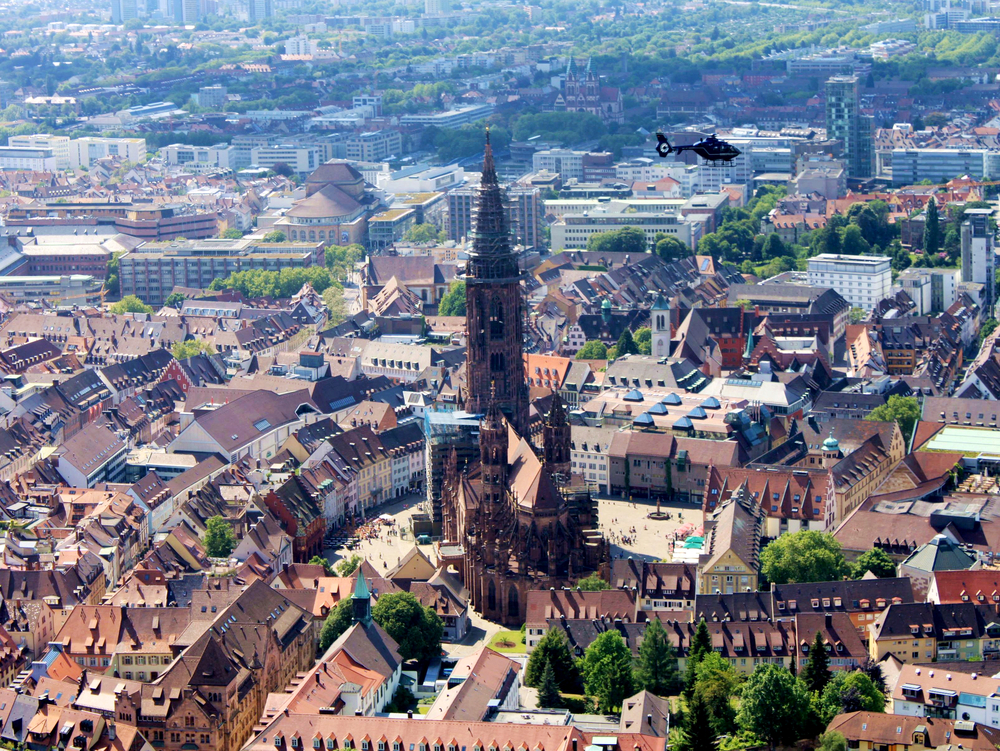 Freiburg is a beautiful, picturesque city in south-west Germany, home to one of the oldest universities in the country, a robust history, a quant Old Town, great restaurants, a thriving nightlife and a cheerful atmosphere. Why wait? Get out and explore the sunny city Freiburg now.