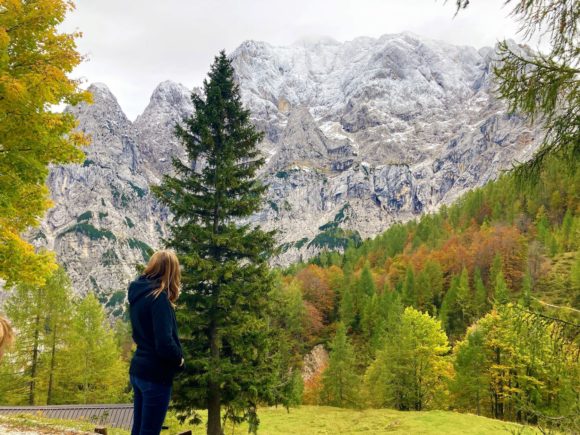 Finding Secrets in the Soca Valley of Slovenia

Story and photos by Kat Nickola

“Mom, how far do you think it goes?” my daughter asked.

“Well, we passed another tunnel entrance up the road around the corner. Maybe there,” I replied.

A stream of light poured into the dark space from a square hole above us. We continued along the stone tunnel. It was about 12ft wide with an arched ceiling; partially hacked out of the rock, partially built with cement; wide enough for an armored vehicle to drive through. 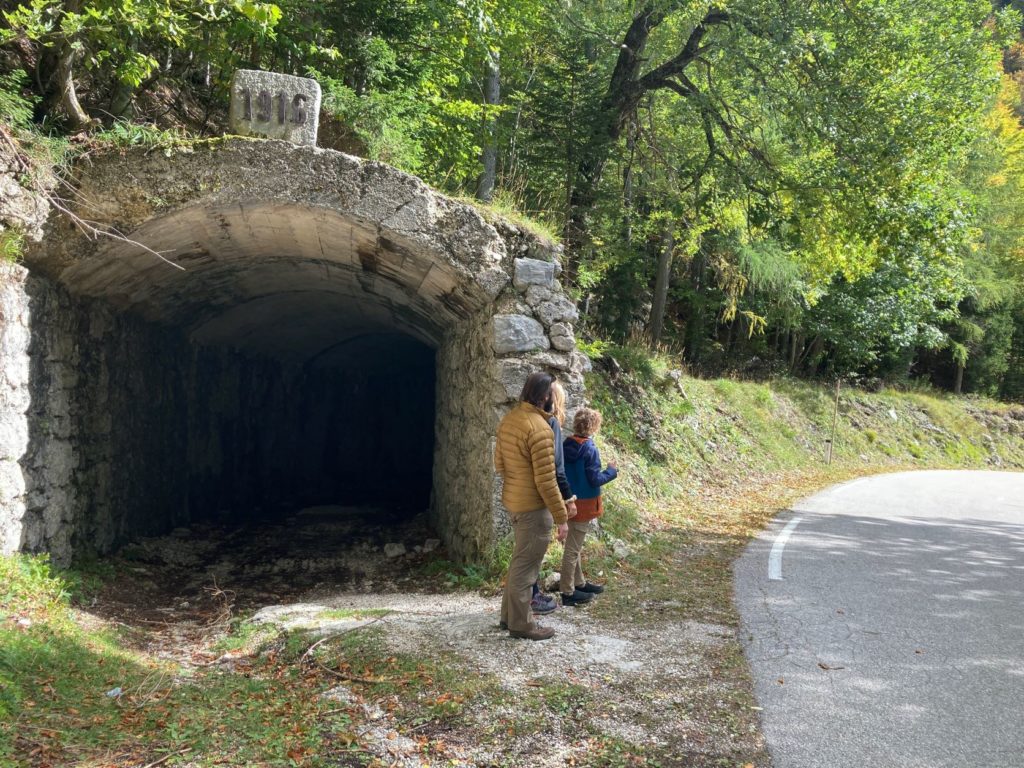 The tunnel was built by Russian POWs for Austria-Hungary during World War 1. In 1915, Italy had declared war on Austria-Hungary, claiming land across the border at the Isonzo river – now called the Soca river – with a goal of gaining the port city of Trieste.

What is now an idyllic alpine valley became a bloody front line battlefield. Locals were warned and fled as both the Austrian and Italian armies  took up positions on the high mountain peaks opposing each other across the Soca (Isonzo) river. More than two years of fighting raged with fortification built and trenches being dug throughout the valley. 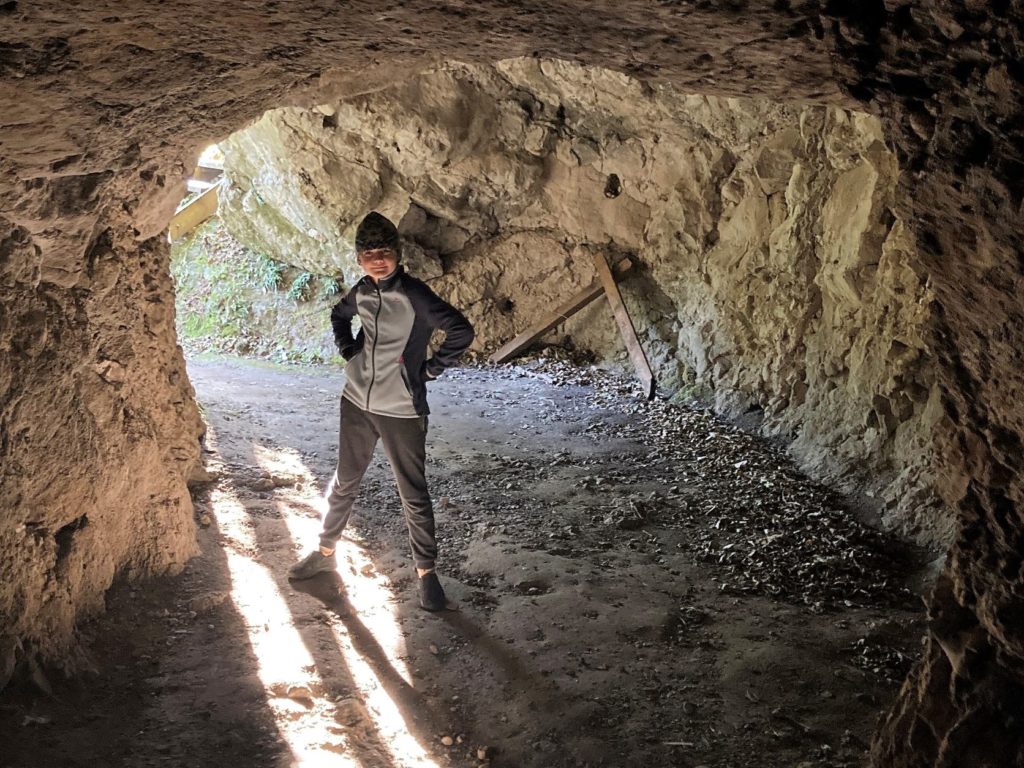 The Austrians used Russian POWs to build a road up over the Vršič  pass – creating a solid supply route. To commemorate the 10,000 prisoners, and the hundreds that died, the road is now called the Russian road. They built the tunnel we explored.

It’s a beautiful drive over the Vršič  pass. We counted the 50 hairpin turns along the way, and noted they were still cobblestone while the rest of the road is paved and barely wide for two cars to pass. At the pass there is an incredible view down into the Soca valley that rivals any scenery in the alps. Rocky, jagged snow-covered peaks line the edges while steep green hills fall down into the Soca river. 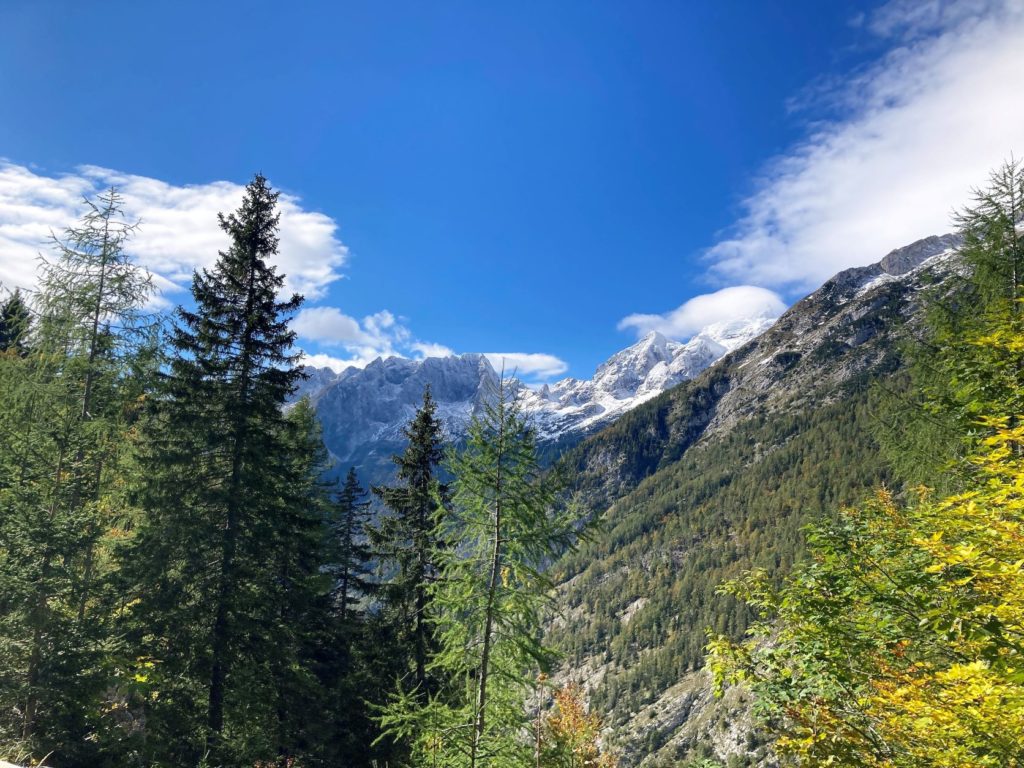 Along the way are numerous places to stop and see relics of the great war. We spotted tunnels, small outposts, crumbling towers, and the base structures for a system of cable cars the Austrians used to transport supplies.

The waterways here are some of the prettiest I’ve ever seen; clear aquamarine that contrasts with the white limestone around it. This is the heart of Slovenia’s Triglav National Park, set aside to preserve 340 square miles of Julian Alps. 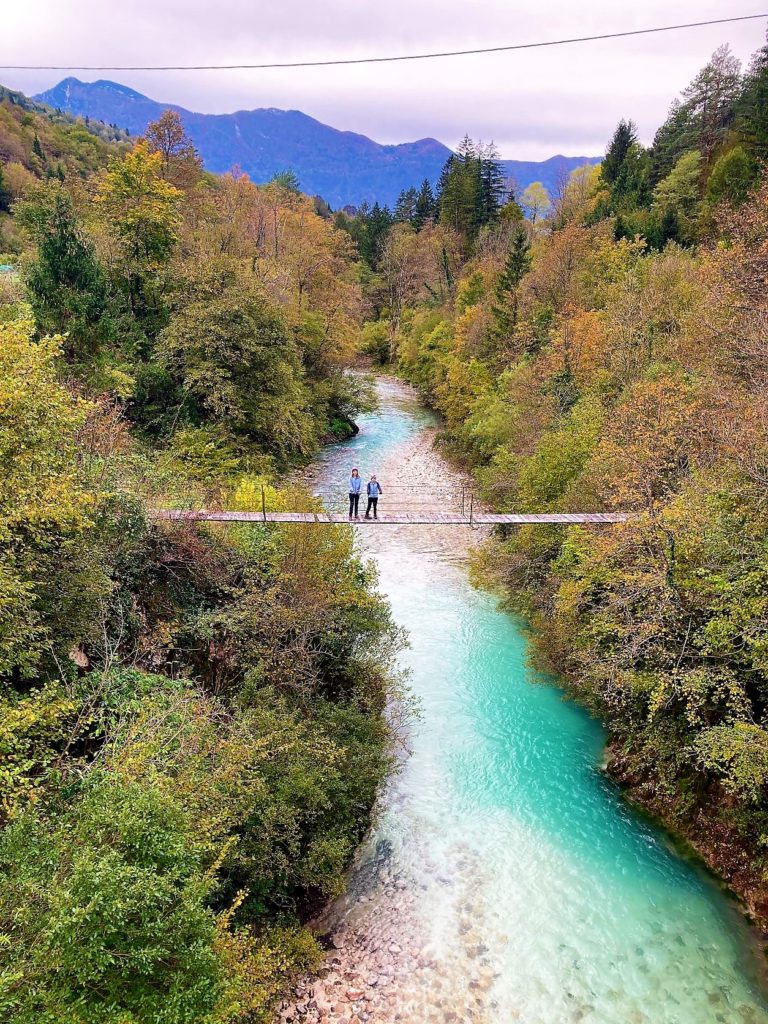 The valley widens into farmland near the town of Bovec. This area saw some of the bloodiest battles during WW1. It was the heart of the Isonzo front and there are still many ruins to see today.

The most memorable site for my family was the Outdoor Museum Revelnik. It is a preserved trench system built by the Austro-Hungarian army. We wandered the trenches, popped into the old medical bunk, explored the natural and expanded cave system beneath, and imagined what life would’ve been like for a soldier in the middle of winter. This spot would not have been deep in the woods as it is now but exposed in the middle of the Soca Valley, it’s only protection the hill it was dug into. It was both fascinating and somber. 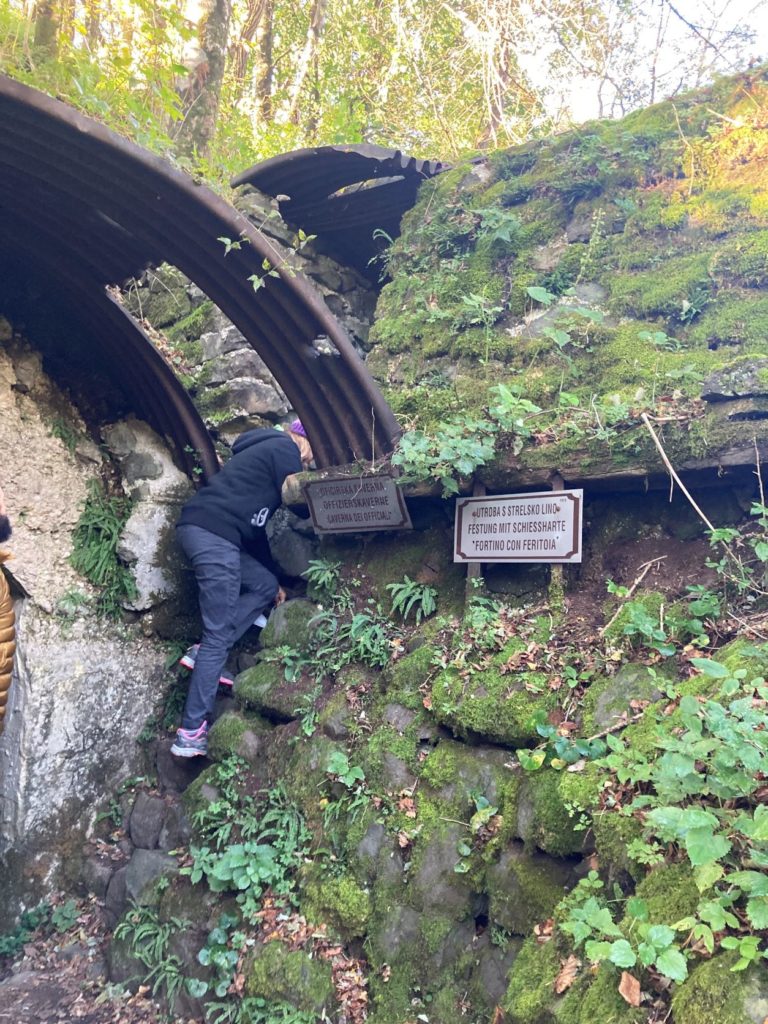 Hiking along The Walk of Peace

We visited the area in October, so many of the typical Soca Valley adventure activities were closed for the season. It is known for rafting, canyoning, and caving. But, we were content with having the place to ourselves. There were no crowds and the sun was shining. The mountains here are limestone, which gives it dramatic scenery; steep-sided gorges, high peaks, and waterfalls gushing out of caves.

We did a lot of hiking; some of it along The Walk of Peace which is a 230km trail system established to commemorate the WWI Isonzo front. It begins in Long Pod Mangartom – a small mining village high in the Slovenian Alps and descends over 11 stages into Trieste on the Adriatic coast of Italy. The trail is pending UNESCO listing and features WWI history coupled with beautiful natural scenery. 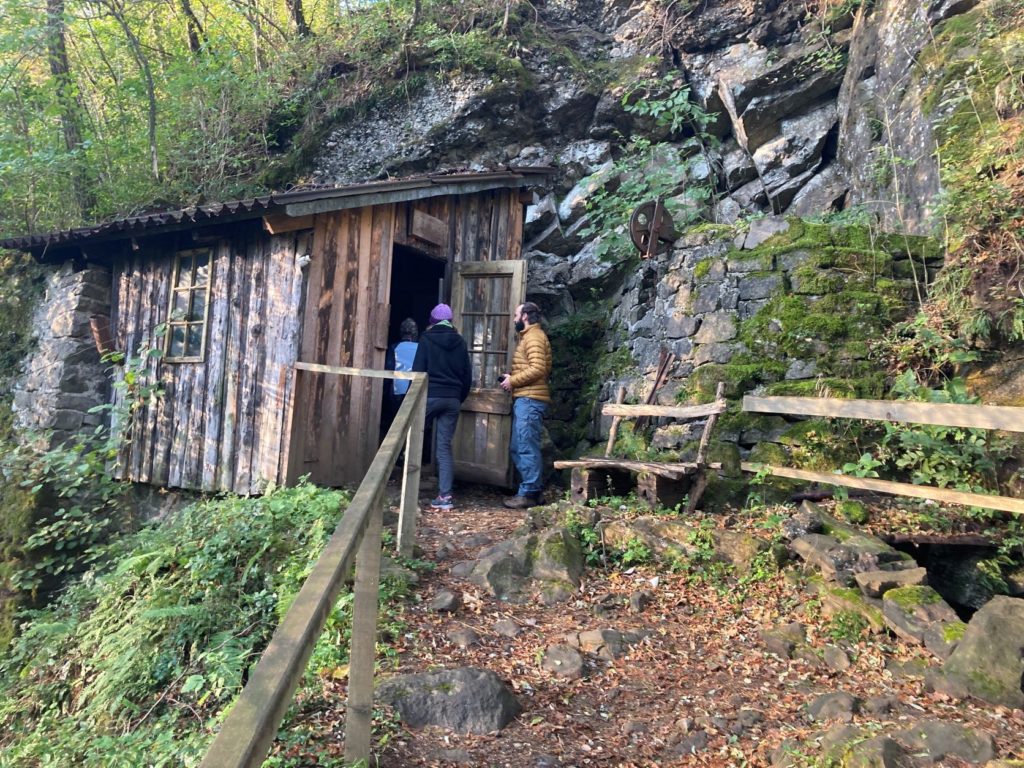 In the Soca Valley, there are numerous other WWI sites like an old battery at the Celo outdoor museum, a memorial to Italian soldiers killed in a huge gas attack, and Fort’s Hermann and Kluze. Fort Kluze was originally built to defend the area against the Turks in the 1400s, and again against Napoleon’s forces who destroyed it. The Austrian empire rebuilt the fort along with Fort Herman which sits on the hill above it.

Currently, Fort Kluze is used as a history museum while Fort Hermann and the tunnels which connect the two have been left as a ruin for exploration. The road up to the forts was inaccessible when we visited, however, we were able to hike to the base of Fort Kluze. The hike took us along the aquamarine Koritnica river, over some hanging bridges, and along a deep gorge. 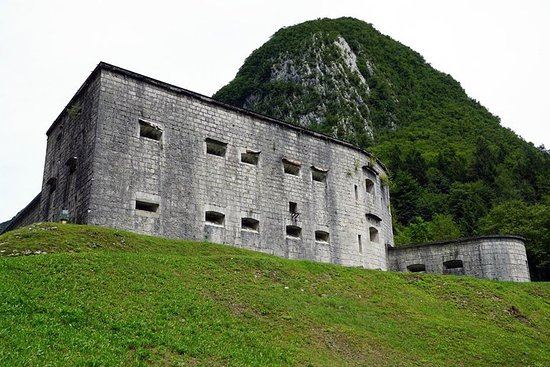 Somewhere we found another tunnel

“Keep going! Keep going!” the kids chanted as we made our way along the tunnel.

We did keep going for a while; until the entrance was a small dot of light behind us and our phone lights couldn’t see further into the darkness in front of us. Eventually, the cave floor was full of water.

“Time to turn around,” I said.

“But where does it go?” my daughter asked.

“I don’t know. All these old tunnels were secret when they were built. It could go on for miles, or have a ladder to a fort just up there in the dark. It’s a mystery I’d love to solve, but we need to go back.”

Since returning, I’ve researched that tunnel and can’t find any information about it. I guess that secret will remain deep in the mountains of the Soca valley.

The Walk of Peace (work in progress):   www.thewalkofpeace.com