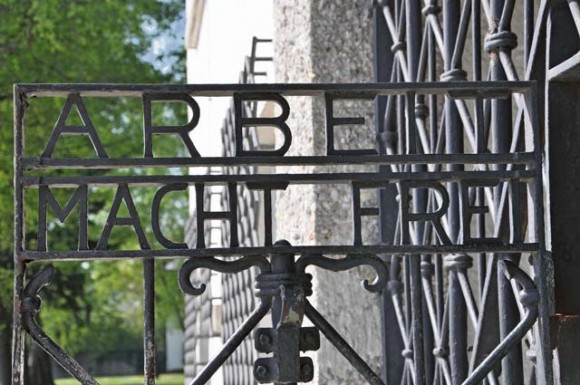 On April 25 2014, 82 service members stationed in U.S. Army Garrison Stuttgart visited a former concentration camp in Dachau, Bavaria. The trip was organized by USAG Stuttgart’s Equal Opportunity and Religious Support offices as part of the Days of Remembrance observance held April 27 to May 4.

The Days of Remembrance were established by Congress as the nation’s annual commemoration of the Holocaust, according to the United States Holocaust Memorial Museum website. The museum, which serves as a permanent living memorial to the victims, designated “Confronting the Holocaust: American Responses” as the theme for this year’s observance. 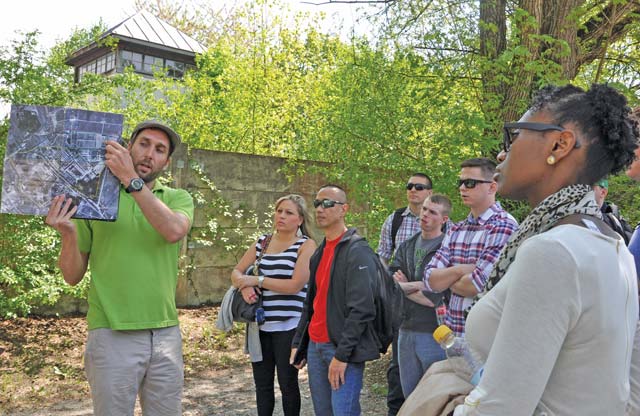 The Holocaust was the systematic, bureaucratic, state-sponsored persecution and murder of approximately six million Jews by the Nazi regime and its collaborators, according to the USHMM website.

The Dachau visit, an EO initiative, was the first time the office has offered a field trip to service members, according to Sgt. 1st Class Juan Carlos Adorno, the garrison’s equal opportunity advisor.

“I really wanted to visit a concentration camp as part of the observance, since we are in Germany,” Adorno said.

“Events like this are important to educate service members. Seeing a camp [like Dachau] touches people in a more personal sense since they can see what the Holocaust did,” Adorno said. “People have to learn and share their knowledge with others as a constant reminder. We’re hoping for our service members that their experience can carry to others within the Stuttgart military community.”

The trip was funded by the RSO from offerings collected from the various congregations in the community, according to Chaplain (Lt. Col.) Steven Jerles, the garrison’s deputy command chaplain.

Before the group took off, Col. John P. Stack, garrison commander, encouraged service members to think about the role of a concentration camp during the Nazi era and what led humans to go to these extremes.

“I ask you to reflect on these questions while touring Dachau, discuss with fellow comrades and share information,” Stack said. 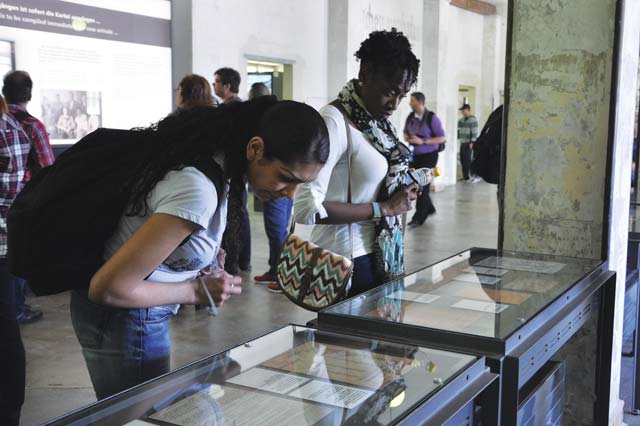 Before departing, several service members said they were eager to visit Dachau.

“I read so many books about the Holocaust and sat through seminars. Being able to see a concentration camp in real time will be quite an experience,” De Gregoris said.

Sgt. Nancy Guillaume, with Marine Forces Europe/Africa, said she wanted to take the opportunity to learn more about the Holocaust after a recent visit to the Holocaust Memorial Museum in the District of Columbia.

“Personally, I think touring the site is important to remind people about what happened during the Holocaust,” Guillaume said.
Originally, Dachau was built for political prisoners and was activated March 22, 1933, less than two months after Adolf Hitler’s election as Reich Chancellor on Jan. 30.

According to Christian Gretz, a tour guide at the Dachau Concentration Camp, the site served as a model for all future camps under the Nazi regime and as a training site for the Schutzstaffel  SS, a defense corps under Hitler and the Nazi Party.

Gretz explained the difference between concentration and extermination camps:  Concentration camps were forced labor camps where prisoners had to perform agricultural and factory work. Later, they also served as transit and prisoner of war camps. Extermination, or death camps, such as Auschwitz-Birkenau, were built to mass murder Jews in gas chambers in support of the Nazi regime’s “Final Solution,” meaning an annihilation of the Jewish people.

In 1942, a gas chamber was built in Dachau, but was never used, according to Gretz.
 
“Dachau was built to intimidate people, but a lot of the prisoners didn’t survive the intimidation,” Gretz said.

Prisoners died from illnesses, starvation and exhaustion caused by catastrophic and unsanitary living conditions, or by mass shootings, torture and medical experiments. Overall, 41,500 were murdered in Dachau.

In Dachau, more than 200,000 people from 34 nations were imprisoned between 1933 and 1945. The first prisoners were political opponents of the regime, such as communists and socialists. The first Jewish prisoners were sent to Dachau because of their political sentiment.

In the following years, other groups were deported to the camp:  Roma (gypsies), disabled, prostitutes, criminals, homosexuals and Jehovah’s Witnesses.  Following the “Reichskristallnacht, or the “Night of Broken Glass,” Nov. 9, 1938, more than 10,000 Jews were sent to Dachau.

Between 1938 and 1939, Austrian, Sudeten German, and Czech prisoners followed. With the beginning of World War II in 1939, allied prisoners of war from Poland, Norway, Belgium, the Netherlands and France, were sent to Dachau. The largest group was formed by the Poles followed by prisoners of the Soviet Union, according to the KZ Gedenkstätte Dachau website, www.kz-gedenkstaette-dachau.de.

The memorial site on the former camp grounds was established in 1965, and rearranged between 1996 and 2003 to illustrate the “Path of the Prisoners” that began at Dachau’s train station and was followed by a forced march to the camp, according to Gretz, the tour guide.

Information displays along the path provide historic information about the camp and its development between 1937 and 1938. The prisoners were housed in a former ammunition factory, a relic of World War I, before they began to build the camp as it stands today. Its augmentation was the consequence of the plan to establish concentration camps as permanent institutions of the Nazi state, according to the KZ Gedenkstätte Dachau website.

Once entering the site, visitors can see what life was like throughout displays, photographs and a 20-minute movie screening at the exhibition area located in the former maintenance building. The building used to house a kitchen, laundry, and bath rooms, and the “Schubraum,” where newly arrived prisoners were registered. This was a vicious procedure during which prisoners were forced by SS guards to undress and give up all their personal belongings.

Some of the other originally preserved buildings include the “Jourhouse,” that served as the main entrance/exit to the camp and housed offices of SS guards, the “Bunker,” or former camp prison, crematorium and watchtowers.

Stuttgart service members were horrified by seeing what the prisoners had to go through.

“It was instant sadness, and I didn’t want to take any pictures. We all know about what happened, but actually being here feels very different from reading about it in books,” said Tech. Sgt. Andrea Lindsey of Special Operations Command Europe.

Senior Master Sgt. Brent Harrison, with Defense Information Systems Agency Europe, said he wanted to come to Dachau ever since he arrived in Germany.

“Touring the site felt extremely sad and depressing. It’s hard to believe that people did this to other people,” Harrison said.
The international monument designed by the Yugoslavian artist and concentration camp survivor Nandor Glid is located at the roll-call square, where prisoners used to be counted mornings and evenings.

Some 34 barracks originally made for 254 prisoners, but at times holding more than 2,000, used to stand along the camp road that runs from the monument to the religious memorial site and crematorium.

Today, two replicas and the foundations of the remaining barracks are displayed. The Mortal Agony of Christ Chapel, the Protestant Church of Reconciliation, the Jewish Memorial and the Russian-Orthodox Chapel make up the religious memorial site.

“People always talk about the Holocaust and mass murdering of the Jewish people. Being here, I also learned about all the other individuals affected [by the Nazi terror] who lost their lives in concentration camps,” Brown said.

“The world has to look up in order for something like this to never happen again,” Brown said. 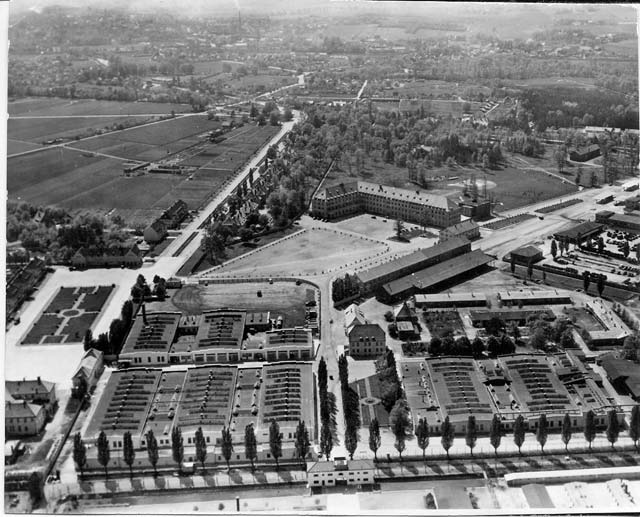 The Dachau Memorial is a circa 4-hour drive from the KMC and Wiesbaden and a little over 2 hours from Stuttgart.