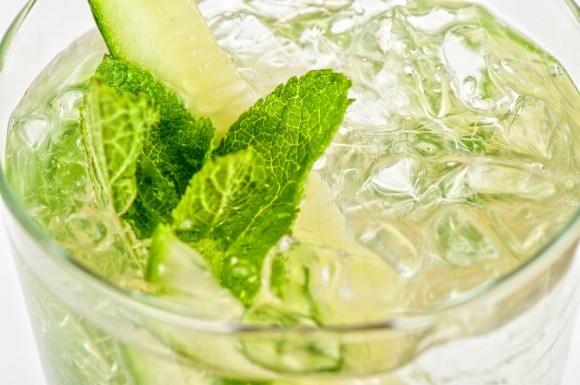 Simple, fruit-infused water recipes to keep you hydrated and healthy

It’s hardly news to us that soda is bad for you (yes, even and especially the diet stuff!). Yet sometimes, facing day-after-day of sipping on plain water can feel like eating the same meal day in and day out for several weeks: completely uninspiring, even if it’s healthy. In an effort to inspire the caff-fiends in each of us who are currently struggling to meet their daily water requirements with the chill of winter in the air, we’ve compiled some recipes for flavour-infused waters that can be easily-made with just a few pieces of fresh fruit and some herbs.

As if staying healthy and hydrated throughout winter isn’t reason enough to try out these recipes (because it’s vitally important to keep up your water intake in cold weather, even if you don’t feel like it, partly due to the frequent exposure to heated air whenever you go inside), you’ll be able to reap the many benefits that result from drinking enough water daily, such as boosted brainpower, improved moods, weight loss and headache prevention; There’s no easier way to get more energy than sipping on tasty, homemade, infused water.

Harness the combination of fresh strawberries and basil leaves for a berry-blasted hydration solution! Simply scrunch up eight basil leaves to release the flavour, throw in three cups of halved strawberries and top the jug up with water. Muddle together with a spoon or spatula and enjoy. If you’d like to prolong the lifespan of the strawberries in the mix, place it into the fridge to cool and if you couldn’t find fresh ones, just go for frozen ones.

Here is something to sip on straight away or after chilling it in the fridge if you want a stronger flavour: pineapple and mint makes for a delicious mix. Throw four pineapple slices into a jug with two sprigs of mint and top it with water. Bonus: you can snack on the pineapple slices after you’ve drained the glass of this vitamin packed fruit-infused water.

For something with a little more class, you can combine two cups of pitted and halved fresh cherries with three thinly sliced lemons and two vanilla beans. Once you’ve topped up the jug with water, muddle the ingredients together with a wooden spoon to aid the infusion of the flavours and enjoy!

With the added bonus of detox, a citrus infused water can be as refreshing as it is good for you. Combine two thinly sliced lemons with two thinly sliced limes and two thinly sliced oranges. As you sip on this, you’ll not only be flushing your body of toxins but also giving it a vitamin C boost that’ll send winter time sniffs and sneezes on the run.

Ditching sugary flavoured soda water doesn’t mean you have to lose the pleasures of sipping on something bubbly. Scrunch six mint sprigs to release the flavour, before chucking them in with two thinly sliced cucumbers and four thinly sliced limes. To add a little fizz, throw in some plain soda water, of which Germans have an impressive selection at every store. You’ll be able to quench any thirst before nibbling on the healthy cucumber pieces that are left over.

Why not get a delicious-tasting fruit cocktail treat to eat after you’re done drinking? Simply stir together two sliced peaches, two sliced pears, two cups of halved grapes, one cup of halved cherries and one cup of pineapple chunks. Chill the cocktail to increase the flavours and serve in individual tumblers, with a spoon to help you chew on the fruits after you’re done!

There is seemingly no end to the mixes and matches you can contrive to infuse your water for a tasty solution to keeping hydrated. Try out any of the recipes suggested above or use your imagination and come up with your own. If you don’t want to face chilled water in the winter, try adding hot or lukewarm water with any one of these tasty recipes. Not only will you be investing in drinking more water but you’ll also reap the rewards of an increased intake of vitamins for you and your family during flu season, in a healthy and tasty way.

Author Profile:
Robyn Porteous is a lover of healthy things and the staff writer for the Water Delivery Company, London’s leading supplier of bottled water coolers. Her Google+ profile contains more information on her other writing. Image courtesy of: Marin / freedigitalphotos.net