I recently saw a reminder that went something like this… “A culinary panorama hike is scheduled to take place on Sunday on a route between Niedermohr, Quirnbach, Glan-Münchweiler, Rehweiler, Matzenbach, Theisbergstegen, Etschberg and Haschbach. Start is 10 a.m. Hikers can start at any point they want. The route offers panoramic views and culinary specialties.”

Why not? It had two things that I love (views and food) and one thing that I can tolerate (hiking). I put it on the calendar and announced it to my husband.

Editor’s note: this year’s event will take place on May 6 from 10 a.m. to 6 p.m. and will hopefully feature better weather. More information along with a map and details regarding food choices can be found via www.kulinarische-panoramawanderung.de There are quite a few culinary hikes in the KMC area and Wiesbaden area as well. Make sure to check our event calendar frequently to stay updated.

What I did not check was the weather. Fresh from a beautiful day at the Olive Oil Festival, I had assumed that the entire weekend would be sunny and warm. I was wrong. But, we were bored at home and hungry, so we decided to grab an umbrella and head to Glan-Munchweiler (the closest of the above villages to our home). 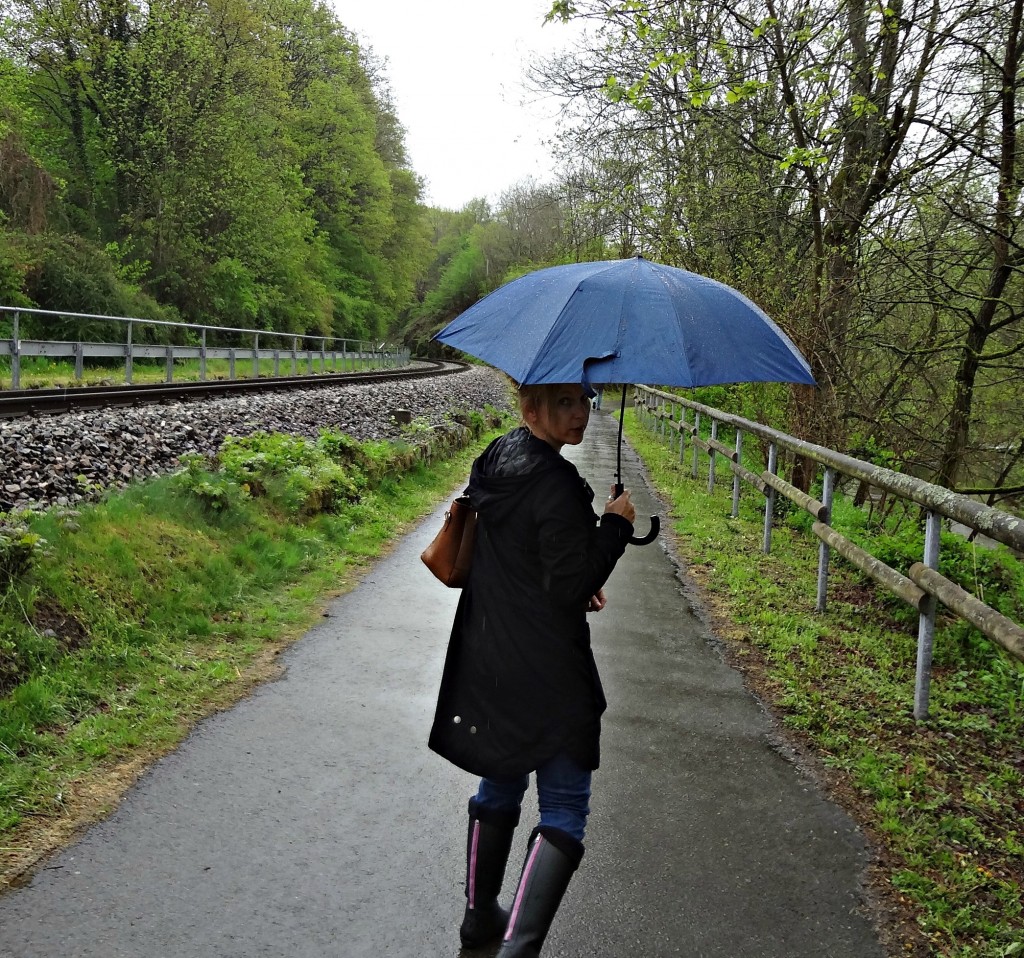 We parked at the train station and asked the gentleman under the “hiking” tent for more direction. He actually laughed. Perhaps because of my terrible attempt at the German language? More likely because of my umbrella and rain boots and the fact that I asked him for directions with my map upside down. Either way, he instructed me that since it was not such a pretty day, the panorama hike would probably be more enjoyable if we just took the leisurely stroll on the path that follows the train tracks. Food would be about 15 minutes away and in a mere 25 minutes we would arrive in Rehweiler, where we could take the train back if the rain continued. Obviously, this man understood exactly where I was coming from. 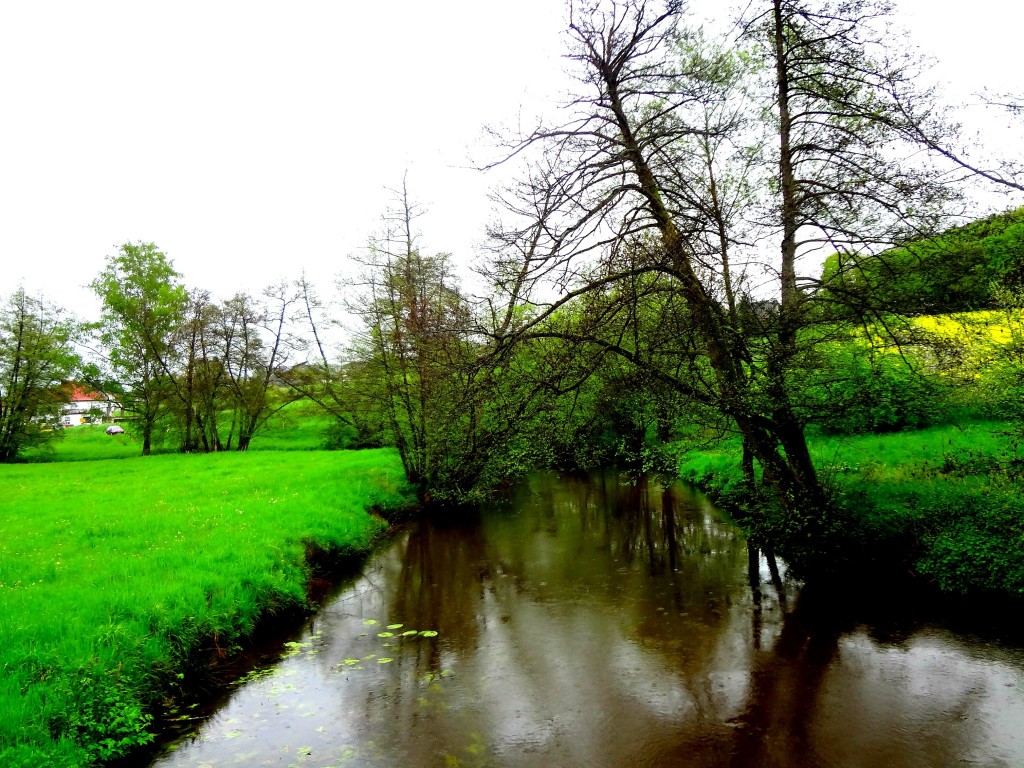 This ended up being a very enjoyable walk for us. I’m sure if we had ventured onto the actual panorama hike then we would have more breathtaking pictures. However, between the contrast of green and the fields of yellow, this made for a great photography session!

We did see a food tent on the way to Rehweiler that was serving the usual…Currywurst and beer. We decided to wait until we got into the village and find something a little healthier so we wouldn’t feel bad about taking the train back. 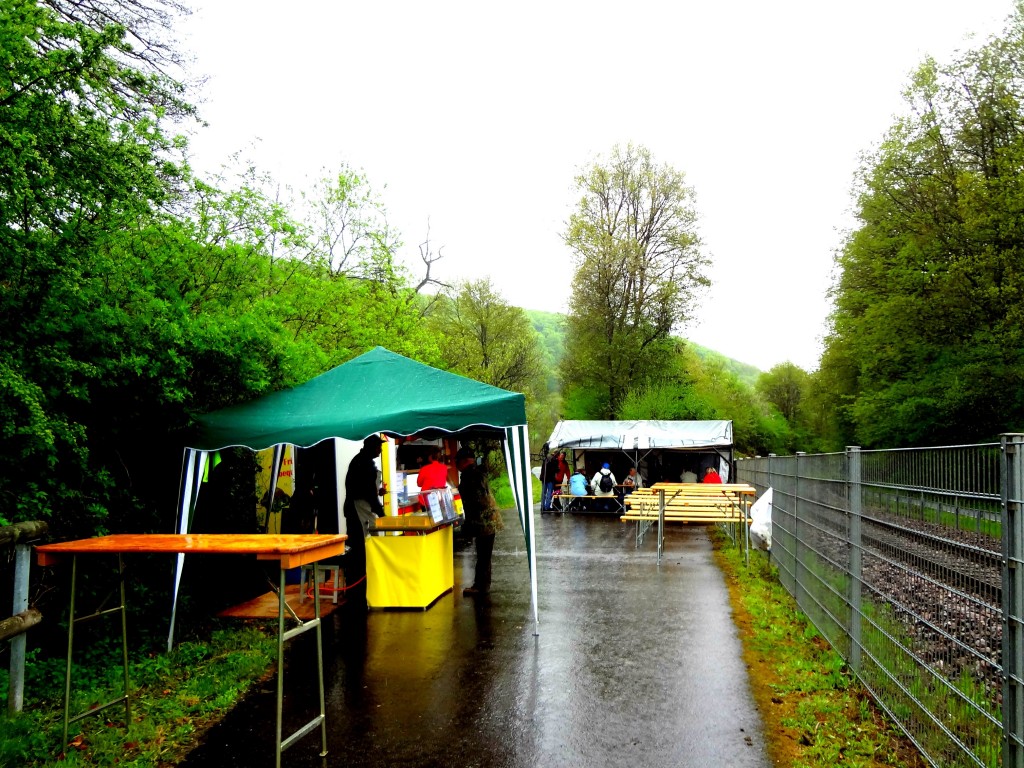 We arrived in Rehweiler just in time to catch a ceremony of sorts at the local fire station. We had no clue what was happening, but watched eagerly as the local youth seemed to be putting on some sort of play for the community. They also appeared to be quite intoxicated or they were good actors. Even with the abundance of umbrellas, everyone seemed to be laughing and really enjoying the event. We laughed too, although we were not sure exactly what we were laughing at.

I did ask one of the vendors if he would explain to us what was taking place. He simply said that this is the way they “open the village” for the summer. I took this to mean that this was the first event they would have and that now…it is officially summer. Whoo hoo!!

This same vendor offered us food and since we did not intend to walk further and it was late in the afternoon, we decided to take him up on this offer. No beer. Cola and Currywurst. You can laugh here. We did. 

After watching all of the festivities and enjoying our food, we opted to forego the train and walk back. It had also stopped raining which was quite nice. We passed very few people on the path, but we did notice a lot of snails. I let them set the pace for this particular “hike”. 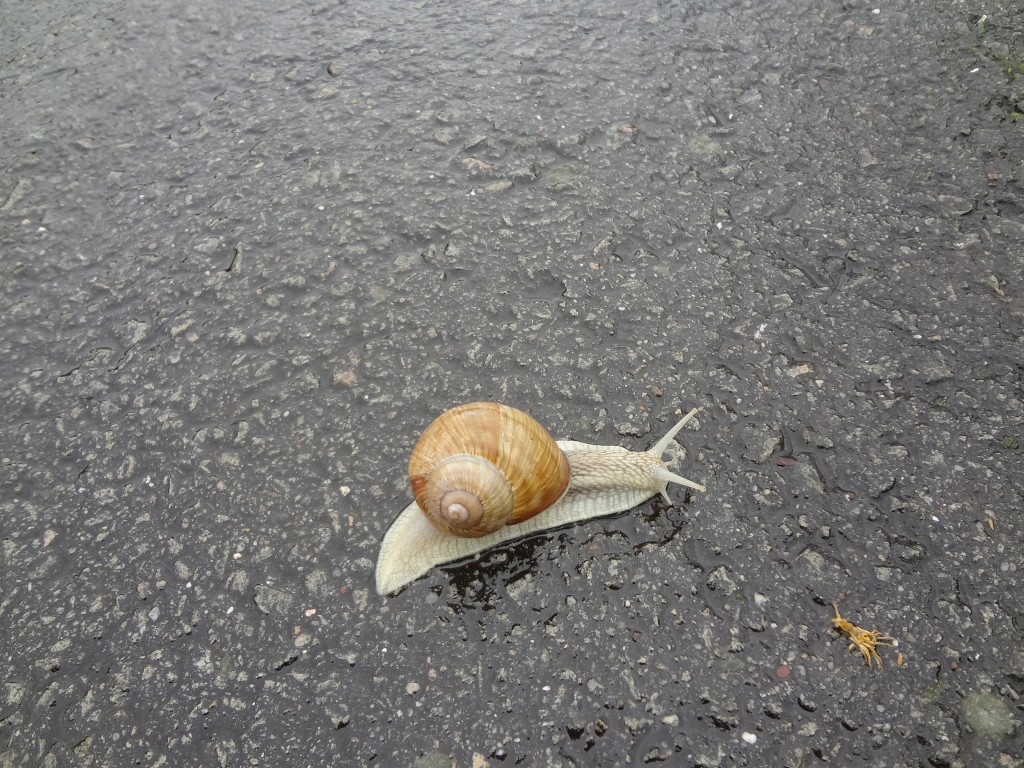 I asked my German friend about the festivities I witnessed over the weekend. She explained to me that this is a tradition for as far back as she can recall and that it launches the summer season (or planting season from many years ago). Apparently, the youth were actually drinking to signify their coming of age. I have no idea how these two things go together, nor did I do an extensive research to validate any of this as factual. But it seemed worth mentioning. This same sort of festival repeats itself in the form of ending the summer season (harvest) in the fall.