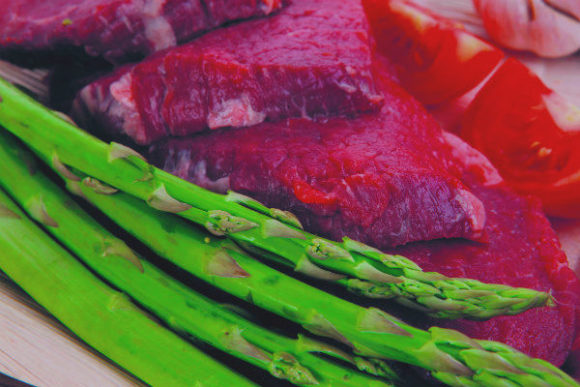 For melted tomatoes, remove the stalk inside and place in boiling water, while preparing an ice water bath. When the skin starts to roll up on the edge of the tomatoes, remove from boiling water and put in ice water. Remove the remaining skin with your fingers. Let tomatoes rest as you prepare the green asparagus by boiling for two to three minutes. (See last week’s recipe for how to
prepare asparagus water.) Remove and put in water bath. Peel with fingers after they have cooled. Then brown in a pan with butter. Cover with lid as you prepare the meat.

Tenderize veal steaks, then brown in butter. Roast on both sides for 2 minutes, then place them in an oven at 300 Fahrenheit for 6-8 minutes.

To prepare the carrots, let the butter melt in a pot. As it starts to bubble, add sugar and allow to caramelize. Add carrots and seasoning. Add one bottle of mineral water and allow to simmer for 8-10 minutes.

To finish tomatoes, add butter to a pot and allow to melt, then add shallots. Before adding broth, allow shallots to get glassy. Then add tomatoes and raspberry vinegar. Allow to simmer on low heat with a lid for 6-7 minutes.

On oven safe serving plates, build your steak with 3 stalks of asparagus and approximately 1-2 tablespoons of Hollandaise sauce on top of the asparagus, in the center of the plate. Broil in oven on top rack until the Hollandaise sauce gets a nice brown color.

Portion out tomatoes and carrots for 4 plates. Place the tomatoes on one side of the plate and the carrots on the other side. Leave the veal in the center.