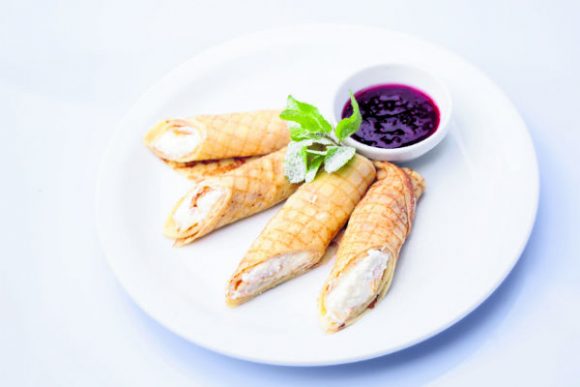 You will need to marinade raisins in rum, water, sugar and lime juice a week before making this dessert. Allow for a spoon full of raisins, one teaspoon rum, a sip of lime juice, one spoon of water and 1/4 teaspoon of sugar per person. If you like you can also add a bit of cinnamon.

250 g of quark*, 6 spoons of liquid cream (if you don’t have liquid cream at home, no worries, regular milk will work also), lime juice and sugar.

FOR THE CRÊPES :
Allow 1 and a half spoons of flour, 2 spoons of milk, 1 egg and a bit of sugar per person. Margarine for the pan. If you like, you can have vanilla ice cream and whipped cream with the Crêpes.

Strain the marinated raisins. Be sure to save the liquid for our next recipe (apple pie or Apfelstrudel, or anything else that calls for drunken raisins).

In a bowl, mix the quark, milk and lime juice. Add the sugar and a dash of the raisin liquid to give it added flavor. Stir all the ingredients until you have a texture like ground apples. Then add the raisins, stirring carefully.

In another bowl, mix the fl our and the milk with a whisk to create a runny dough. Th en add the sugar and the egg. Heat a non-sticking pan with the margarine.

Put just enough dough in the pan to cover it for a thin Crêpe. Cook it slowly on low heat, turning it once it has a nice yellow color. Don’t let them turn brown. Place the Crêpes on a plate and put them in a pre-heated oven (low heat) to keep them warm until all Crêpes are made.

Take one Crêpe add two spoons of the quark fi lling and roll the Crêpe. Add some vanilla ice cream or whipped cream for a really delicious dessert. (If you are counting calories, make a lighter version by using fat-free milk and low-fat quark. Replace the sugar with stevia or something similar. And use low-fat vanilla ice cream and whipped cream).

Join us again next week for another treat!

*Quark is a type of cream cheese or curd. You can easily get it on the economy in any food store.