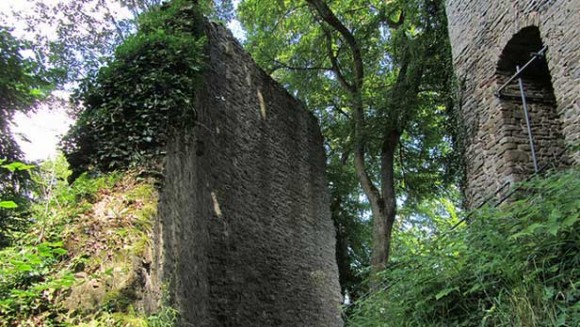 A Tale of Two Castles

Story and photos by Michael at Easyhiker.co.uk

Wolfstein, the starting point or final stop of the Pfälzer Höhenweg hiking trail in the northern Palatinate, is a handsome small town with quite a few period buildings near the Kaiserslautern Military Community. The two castles nearby, called Alt-Wolfstein and Neu-Wolfstein are the perfect place for an easy and picturesque hike.

Alt-Wolfstein is a ruin built in about the 12th century and destroyed in 1504. Throughout its relatively brief history, the castle was apparently more the subject of legal wrangling than of the sort of knightly combat we more readily associate with the Middle Ages.  The history of this area is complicated, with many aristocratic families in the region claiming rights to the castle at some point during its existence.

It reached the point where they decided to settle the conflict by handing out shares in the castle, “Alt-Wolfstein Inc.”, but before this arrangement was really given a chance to prove that it could work, the castle was destroyed in an equally bitter and impenetrable, but altogether larger and more violent conflict (the Landshut War of Succession) and never rebuilt.

Having visited Alt-Wolfstein as part of the Höhenweg trail, we somehow expected to find that Neu-Wolfstein would be a castle in a more modern sense of the word, a “palace castle” like Versailles, perhaps with a living Duke or some such thrown in. But it is also a ruin, only a hundred years or so younger than its older cousin. 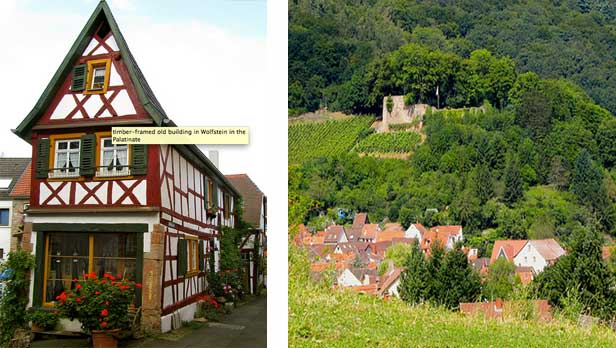 Peaceful prosperity, it appears, was never on the cards for either building, and Neu-Wolfstein got it even harder in the teeth than its predecessor: the castle was razed to the ground and reconstructed three times, most recently in 1792 when it served for a time as a military hospital for the troops of the French Revolution, before it was gradually abandoned to decay. Today, it does nothing more than provide a romantic backdrop to the Wolfstein townscape.

The two castles are connected by a footpath which is roughly half a mile long, and both feature in the Wolfstein stage (circular hike) of the Pfälzer Höhenweg trail. You can, however, reach either castle conveniently from the town, too: either independently or on one of the Culinary Events occasionally hosted by the Landgasthof Hotel Königsberg where they take their guests on a nightly excursion to Alt- and Neu-Wolfstein, providing food and drink on the historic ramparts.