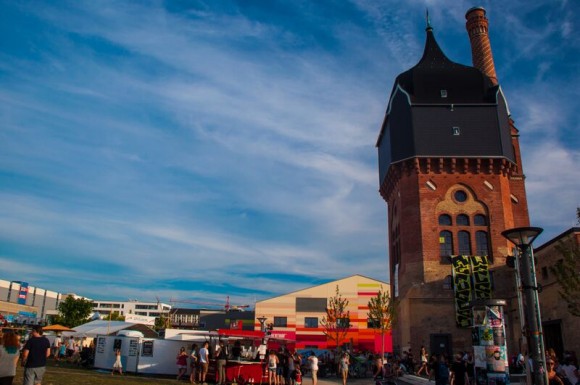 If NYC’s Greenwich Village and Wiesbaden, Germany collided, it would create: The Wiesbaden Folklore Fest.

Held at the Wiesbaden Schlachthof during the last weekend of August, the Folklore Fest brings out the funky, cultural, alternative and artistic side of Wiesbaden.

This 3 day open air festival has been entertaining the funky masses every late August since 1976. This felt like an end of summer celebration in the sun! This fest had the normally provided fest entertainment such as music, food and drink but unlike other summer fests in the area, it also had one of my favorite pastimes: shopping!

The Folklore Fest was small in size compared to other weekend long music festivals, but they really had a great shopping tent. The vendors sold items you normally would not find in Wiesbaden stores. They sold handmade clothes, jewelry and unique gifts from around the world. They sold funky and hip items at great prices. Even if you didn’t go to shop it was still really fun to walk around the shopping tents and see new things. 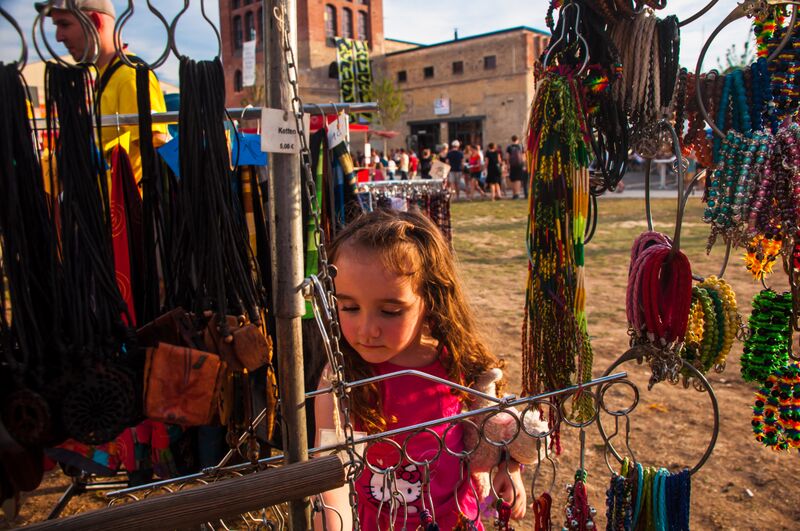 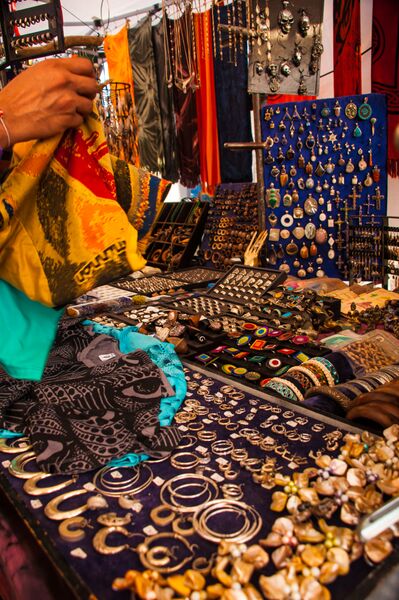 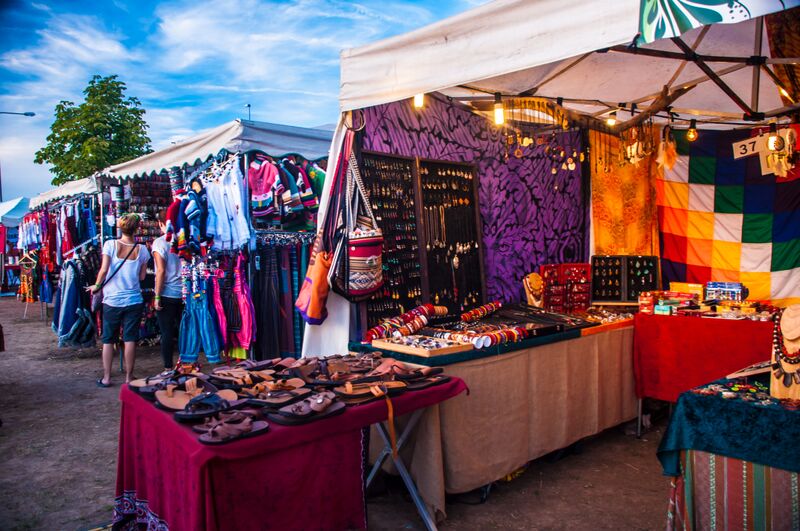 © Gemma
The fest wants to give the feeling of welcoming all different types of people, they are strongly against anti-discrimination, racism and wants everyone to be there with an open mind. For example, there was plenty of interpretive performing arts, displayed crafts and music acts.

There was a performing arts group walking around the fest that looked like two big babies doing interpretive dance. My daughter was pretty scared of these guys and I had to cover her eyes every time they passed by us! Even though they were kind of creepy, I appreciated the uniqueness of the situation and art form. 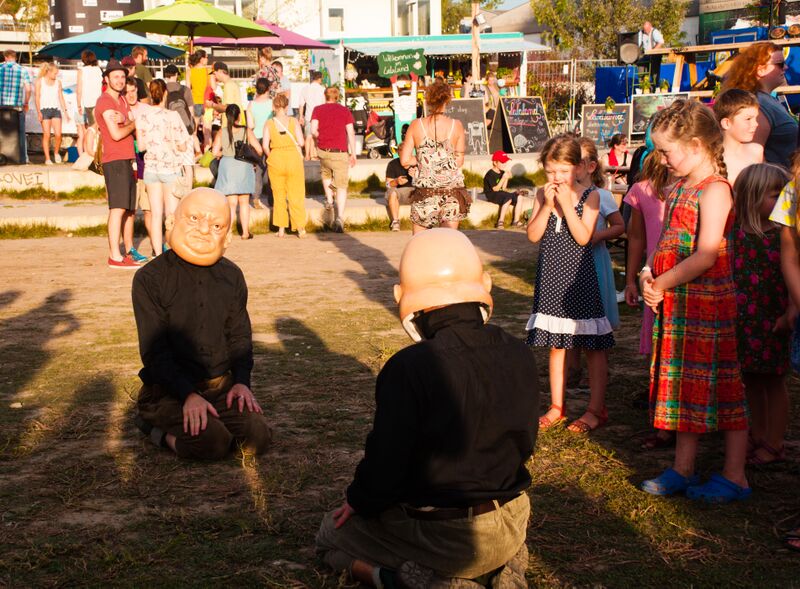 © Gemma
A very popular area for the kids was the huge block pile. All day kids were busy creating with the massive pile of wooden blocks. 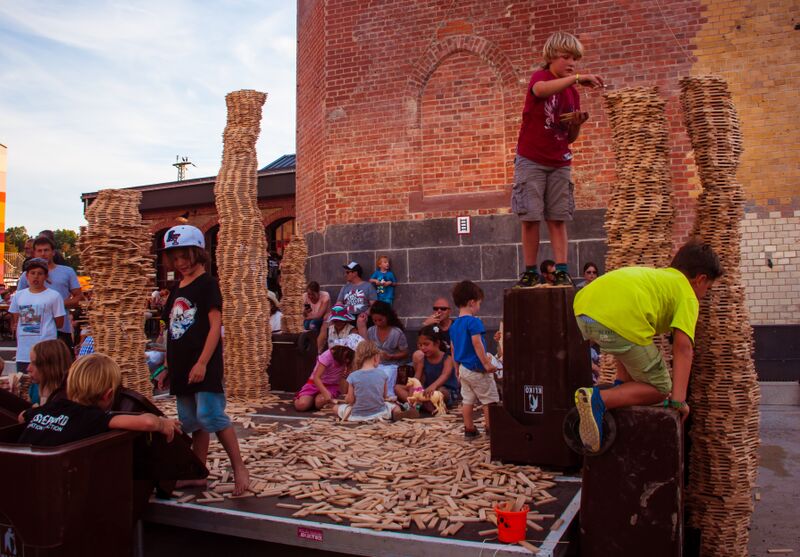 © Gemma
To match the creative fest vibe, the food vendors were also extremely unique! One grill vendor looked like right out the movie ‘Mad Max’. They had great food variation as well, such as Afghani vegan food and Mexican burritos. 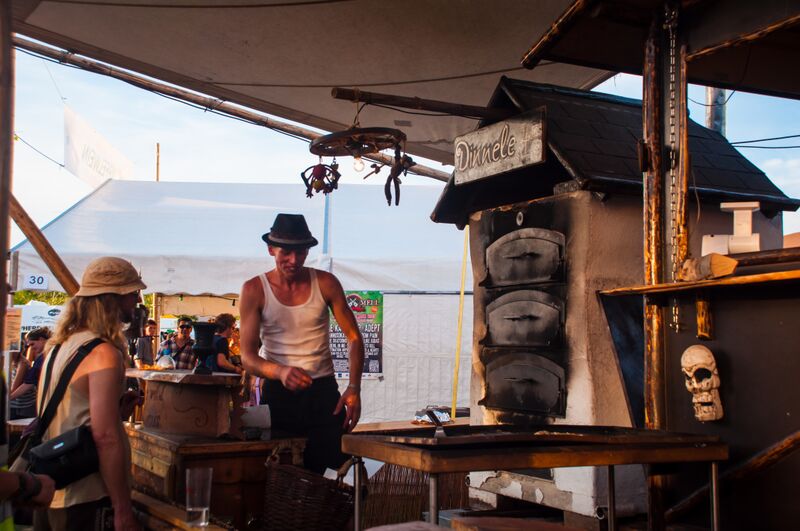 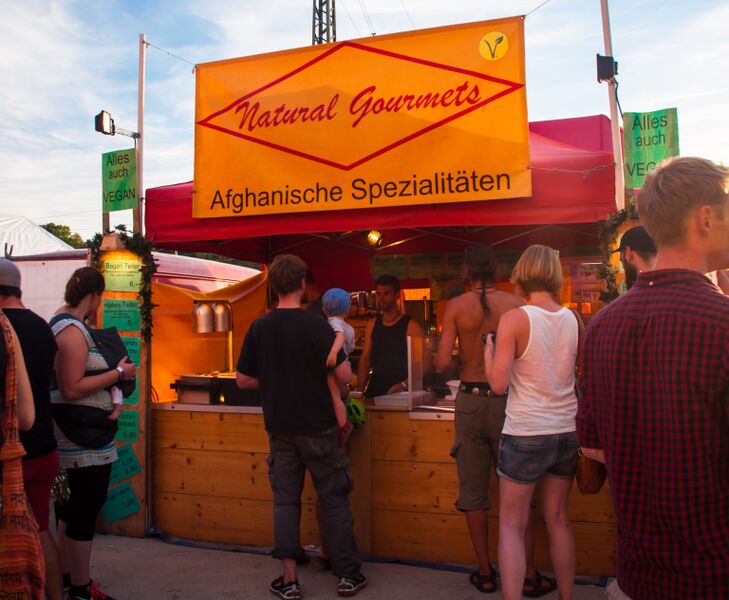 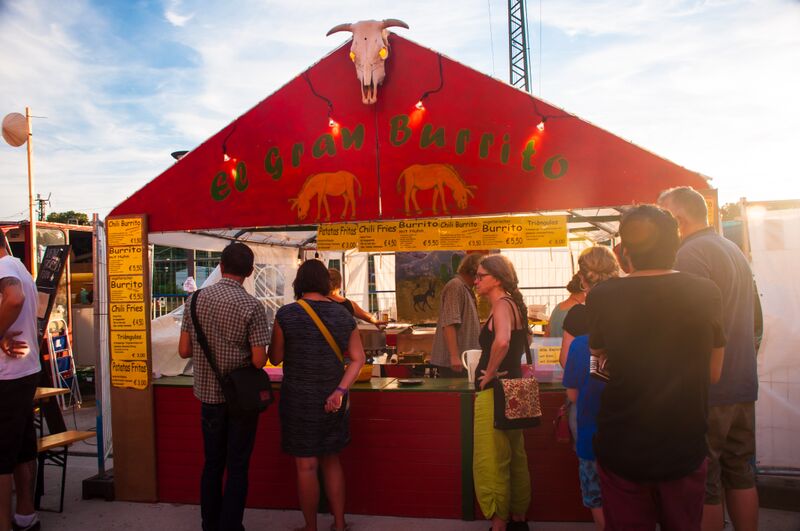 © Gemma
A food vendor had one of the best quotes that I totally agree with! “You can only be happy with a happy stomach”. 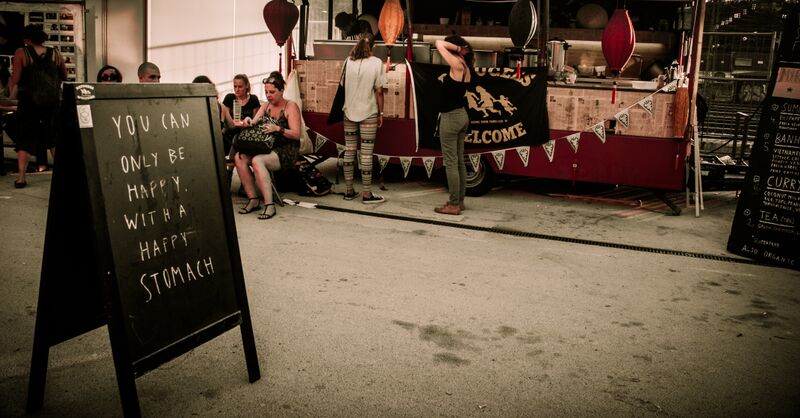 © Gemma
In addition to all the cool funky food and art, no doubt the main attraction of this fest was the music! One of our favorite activities were the homemade musical instruments all around the park. Made from hula-hoops, bicycle wheels and even rubber boots, these creative instruments made magical sounds! 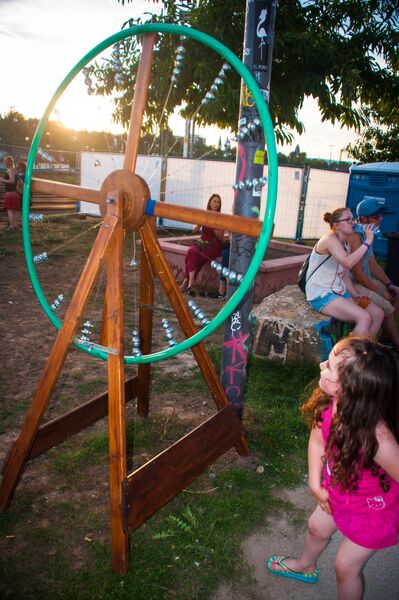 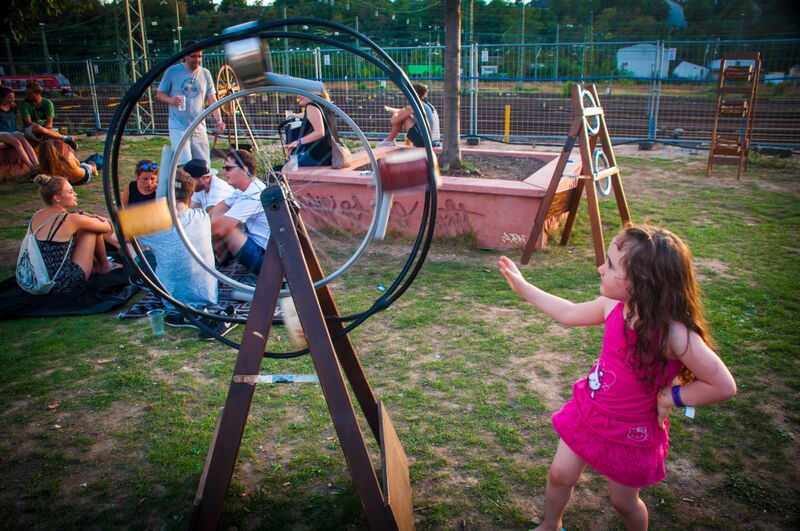 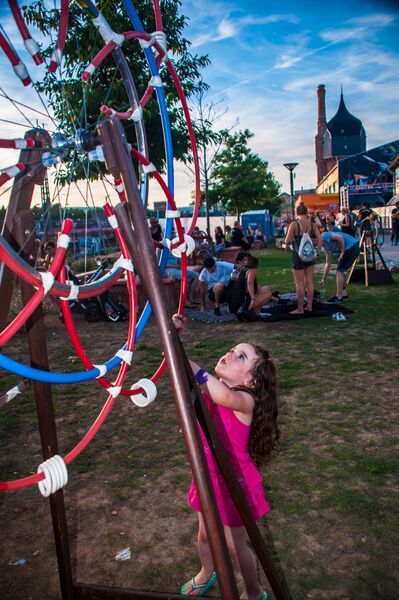 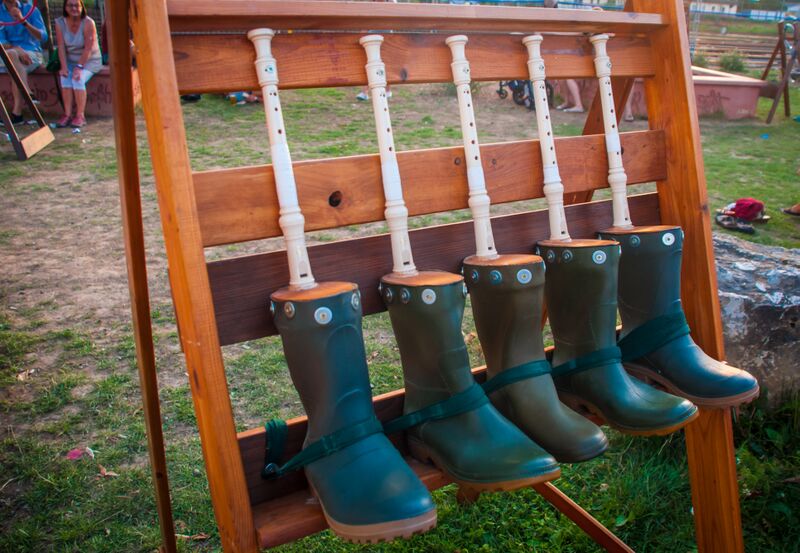 © Gemma
Located in the back of the fest was the main stage, which brought around 30,000 visitors throughout the 3 days! For a small fest and not so large city, it really gave the experience of a huge music festival! They had an exciting line up each day with a great variety for the fest goers which included metal, rock, pop and hip-hop.

© Gemma
Along the side of the area with the big stage, there was a water spray station set up to cool off the music fans during the shows. I envisioned a second Woodstock mud party breaking out! 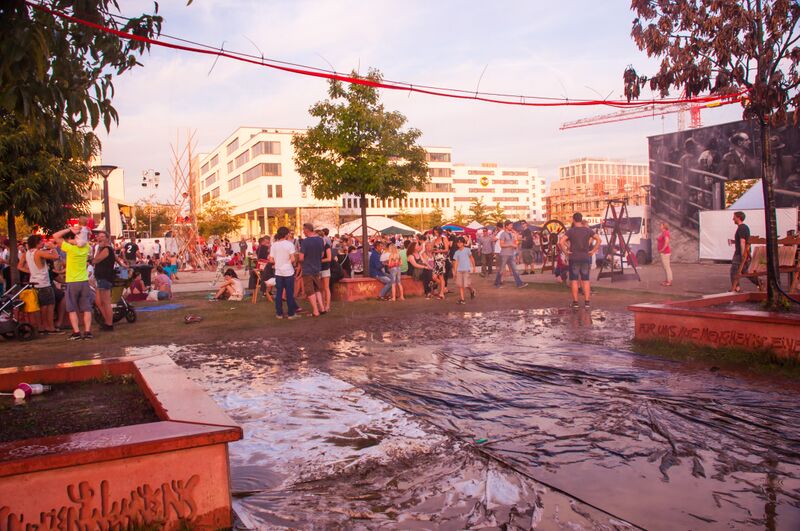 © Gemma
If you want to see this alternative/funky side of Wiesbaden, be sure to check out the Folklore Fest next August! 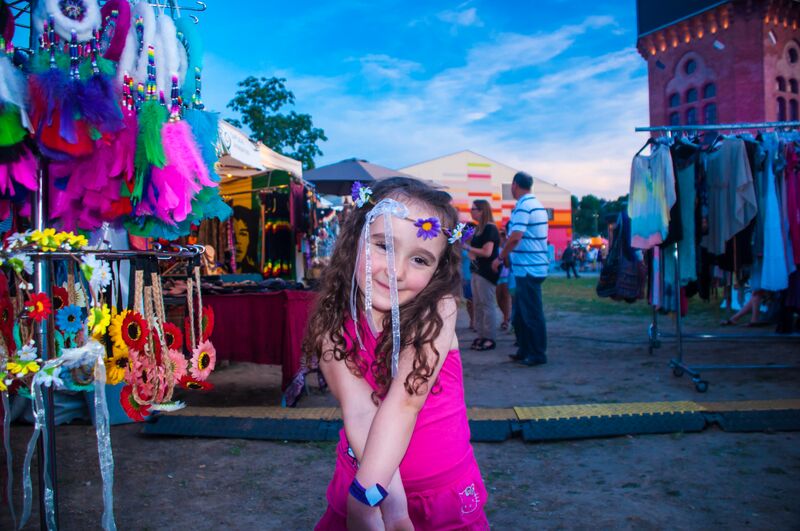