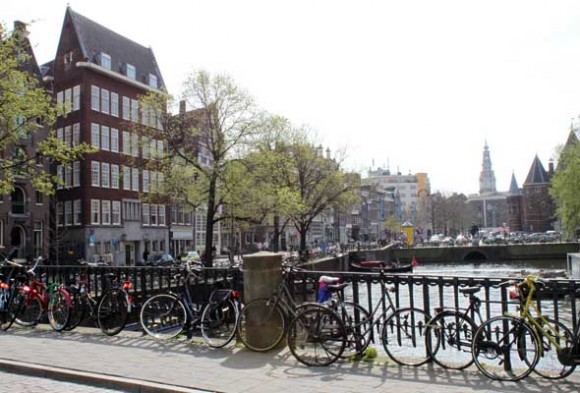 Tips for getting to (and around) Amsterdam

This beautiful city is a must visit for Americans in Europe. Amsterdam’s canal infrastructure, its bicycle culture and its personality, which is closely associated with tolerance, open-mindedness and liberal points of view, makes it truly unique.

There are no skyscrapers. Most of the buildings around the canals were built in the 17th century, giving Amsterdam a small town feel even though it population is over 800,000. The perfect getaway on a long weekend. 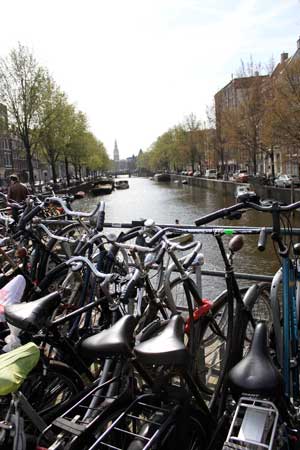 Amsterdam’s inner city is relatively small and very easy to walk, bike, or bus around.
Here are 4 ways to explore:

Driving
Driving your car into the city is discouraged by high parking fees (€40 per day and up). Additionally, cars are not allowed on many streets, and the presence of so many one-way streets makes driving difficult.  A good option if you plan to make the trip by car is to park at one of the Park and Ride areas around the A10 highway loop.  You’ll simply pay to park and then grab the train into the city center.  This was super easy, quite affordable and we were able to bring our luggage along with us (though we packed very light).  For information on the Park + Ride system, click here.

If you still wish to bring your car into the city, here is information on parking garages and prices.

1)  By foot
Once you arrive in the city, we recommend you explore on foot.  Almost everything is within approximately 20 minutes by foot but keep a watch out for bicycles – they seem to think they own the road, and they don’t stop for you!  They also have their own lanes and traffic lights in some places, so be sure to look both ways for cars AND bikes before you cross the street.

2)  Bicycle
It is said that there are more bikes than people in The Netherlands and you won’t find this hard to believe once you’ve visited. The population of Amsterdam is about 800,000, but there are about 1.2 million bicycles. The city is very bike-friendly with its over 250 miles of bike paths. Because of its safety record, helmets are not required and rarely worn.

3)  Taxi
You can get a taxi quickly on almost any street and a trip inside the inner city will cost about €10. Because of the restrictions on driving autos in the city and the vast number of canals (Amsterdam has more canals than Venice!), the taxis often have to drive a circuitous route to get you to your destination. A taxi to/from the airport costs €40-€45. Call 020-6777-777 and you will have a taxi in about 5 minutes anywhere in the city.

Language
You’ll be amazed at the number of people who speak excellent English in Amsterdam. The command of the language is incredible and will make your trip a little easier and even help you learn more about the local culture.

What you must know before you go! 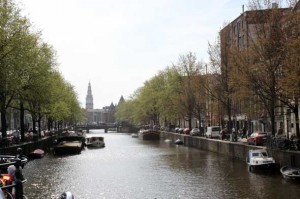 If you head to Amsterdam without understanding the difference among the above establishments, you may be in for quite the surprise!

Coffeeshops are shops where the sale of cannabis is legal . You can order food and beverages as well, but alcohol is not allowed to be sold in these shops. They cannot sell cannabis to minors, and they are not allowed to sell hard drugs. They are also not allowed to sell‚ strong cannabis,’ a form of marijuana with levels of THC (the active ingredient) that is over 15%. If they wish, shops can refuse to sell to foreigners based on a 2013 law that requires purchasers to be a legal resident of The Netherlands.

Koffiehuis literally means ‘coffee house’. When you see it spelled with a ‘k’, you know they sell real coffee. They cannot sell marijuana at these shops.

NOTE: It is illegal to buy or sell drugs of any kind on the streets. You can be thrown in jail for violating this law.

Amsterdam is a beautiful city and there is are so many beautiful restaurants, shops, museums, and art galleries to explore.
Check out our article about 4 things to do while you’re in Amsterdam by clicking here.