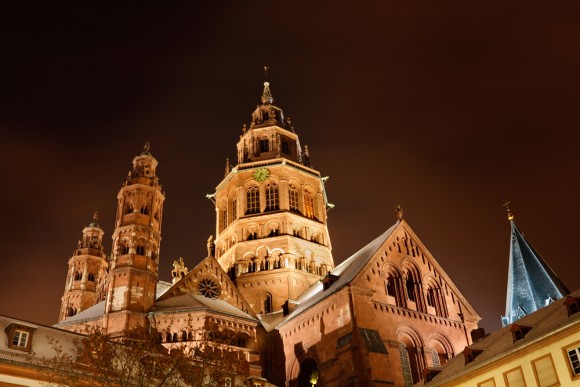 Take a Trip to Mainz

Mainz is famous for its Romanesque cathedral (founded in 975) and it is also the capital of the state of Rhineland Palatinate. It gets its name from the River Main as it sits at the confluence of this and the Rhine, on the west bank of the Rhine.

Mainz was populated by the Celts and later became the Roman military camp, Mogontiacum or Moguntiacum, named after a Celtic god Mogo. One of Mainz’s claims to fame is that it was here that the Gutenburg printed his first books using movable type on his printing press.

Mainz holds an annual carnival in February or March, depending on when Lent begins. The carnival procession takes place on Rose Monday and the event ends on the Tuesday night, before Ash Wednesday. The Carnival has been held for centuries and is a part of the cultural heritage of the city of Mainz. 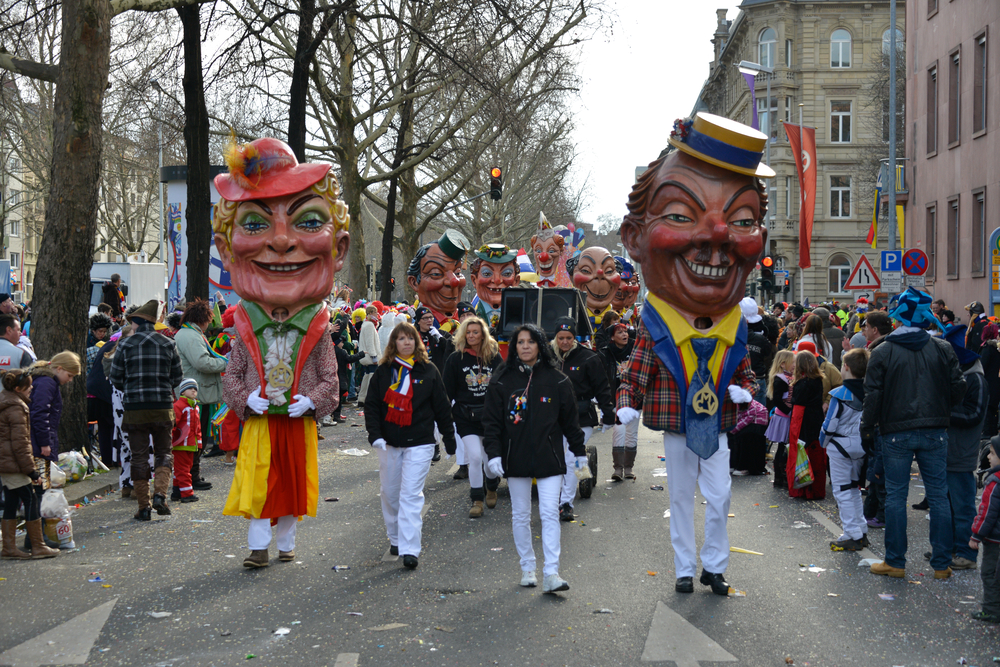 You can wander through the narrow winding medieval streets in the old part of the city with their cobblestones, and shop in the boutiques, or rest at one of the many cafes in the area. Kirschgarten (Cherry garden) Square is really picturesque, with its timber-framed houses and the Marienbrunnen fountain. Unfortunately all the cherry trees from which it got its name have long gone. There is an ancient cherry tree stump that lingers in the square, located outside the Zum Beymberg bakery. 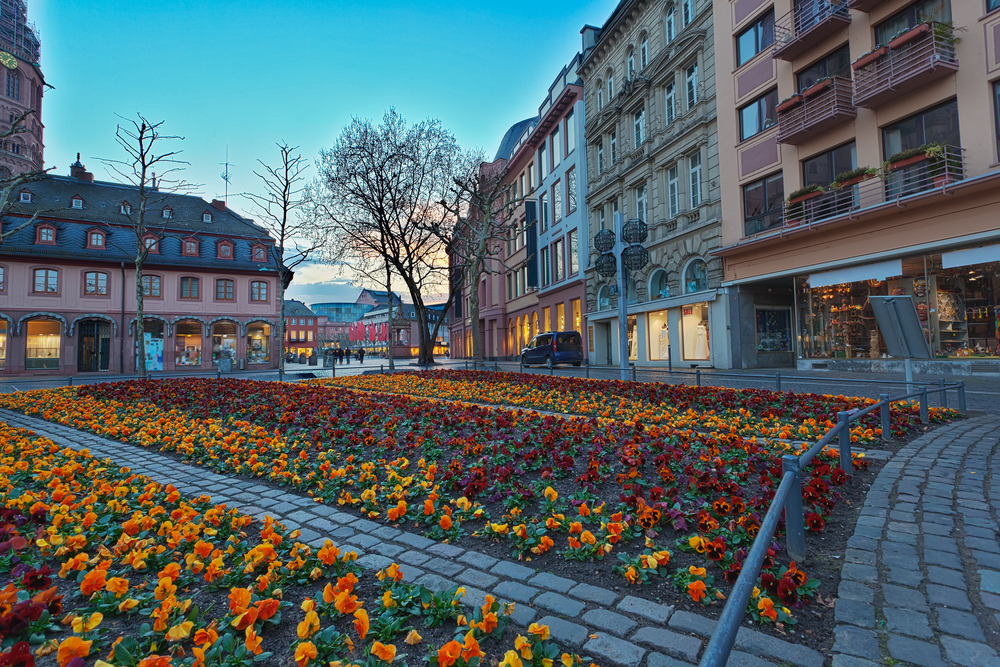 Things to do and see in Mainz 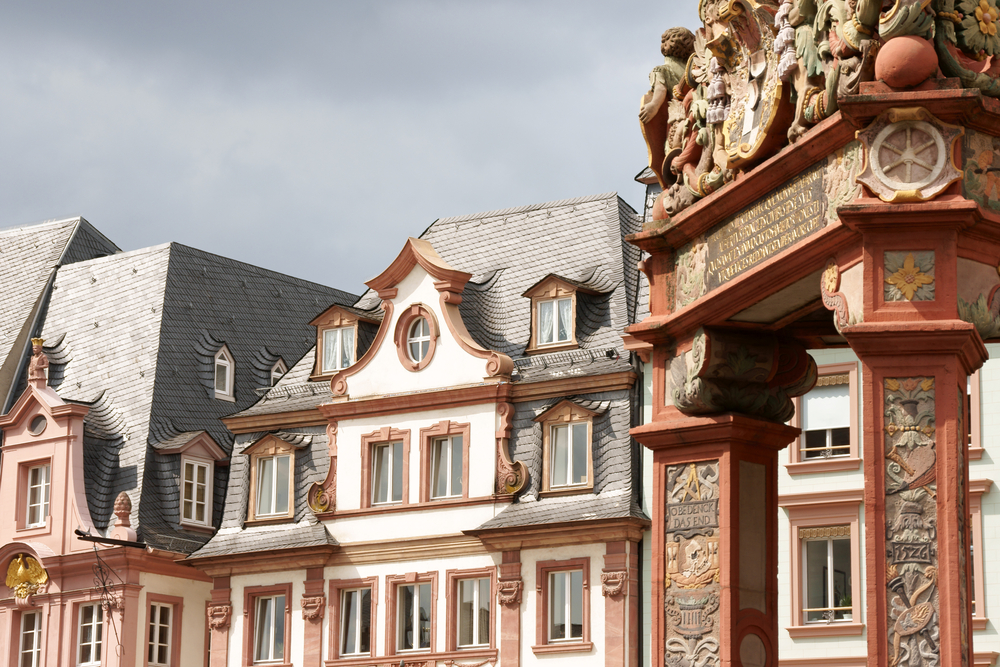 Mainz old town is a must as it is full of half-timbered houses which have been painstakingly restored so that they are a real blast from the past. This area extends from the Dom, St Martin’s cathedral, St Martin’s Cathedral, to the Mainz-South Rail Station. The intricate alleys which zig-zag through this part of town have intriguing names such as Little Nose Way, Hering’s Fountain Alley and Corpse Yard. During the day the area is busy with shoppers and at night there are many bars and cafés to choose from. If you want to escape the hustle and bustle of the streets, pause awhile in the 18th century St Ignaz church in the Kapuzinerstrasse. 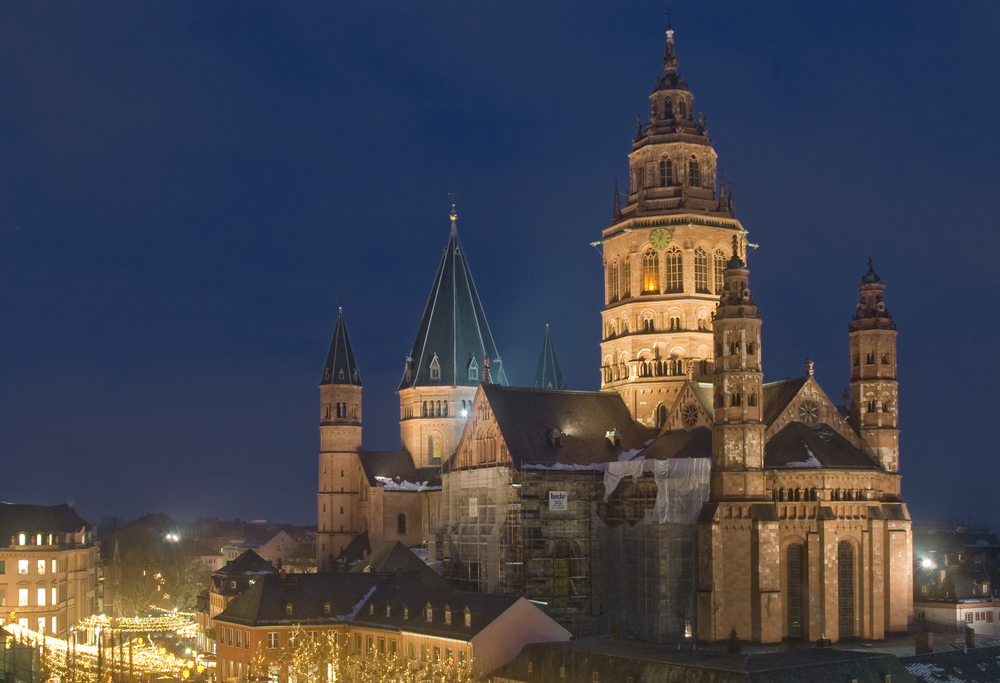 The Dom is built of red sandstone and it towers above the buildings which surround it. You will need to spend an hour or so in it if you want to see everything. It is a truly impressive building and dominates the landscape with its six towers and two-storey cloisters.

As Mainz is the birthplace of Gutenberg, there is naturally a museum with his Bible prominently displayed. You can see a live demonstration of how Gutenberg printed his books which is a far-cry from the digital print we have today. 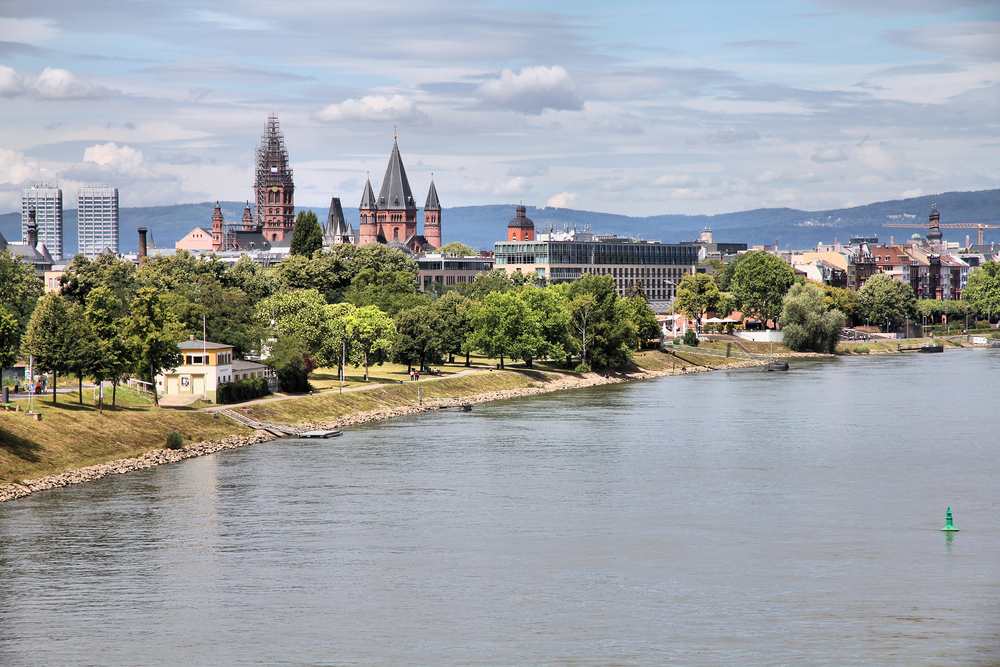 In Germany where there is a river, there are cruises to take tourists along it, and Mainz is no exception to this general rule. You could, if you were so inclined, take a train to Cologne, for example, and then take a river boat to Mainz, which is a wonderful way of seeing both the countryside and the cityscapes.

Apart from the Mainz Carnival (Fastnacht), there are several major annual events and festivals as well as a host of others, so you can party in and around Mainz for most of the year.

The Midsummer St. John’s Night Festival (Johannisnacht) lasts for four days and is held close to the Gutenberg Museum in Liebfrauenplatz. Here you can witness centuries-old traditions such as the initiation ceremony for printers which is the ducking of printing apprentices. Every year the festival ends with a spectacular fireworks display.

This is Germany’s biggest antiquarian book fair and is held during the Midsummer Festival (on the Saturday, Sunday, Monday from 10 a.m. until 10 p.m.) at Ballplatz and Schillerplatz. 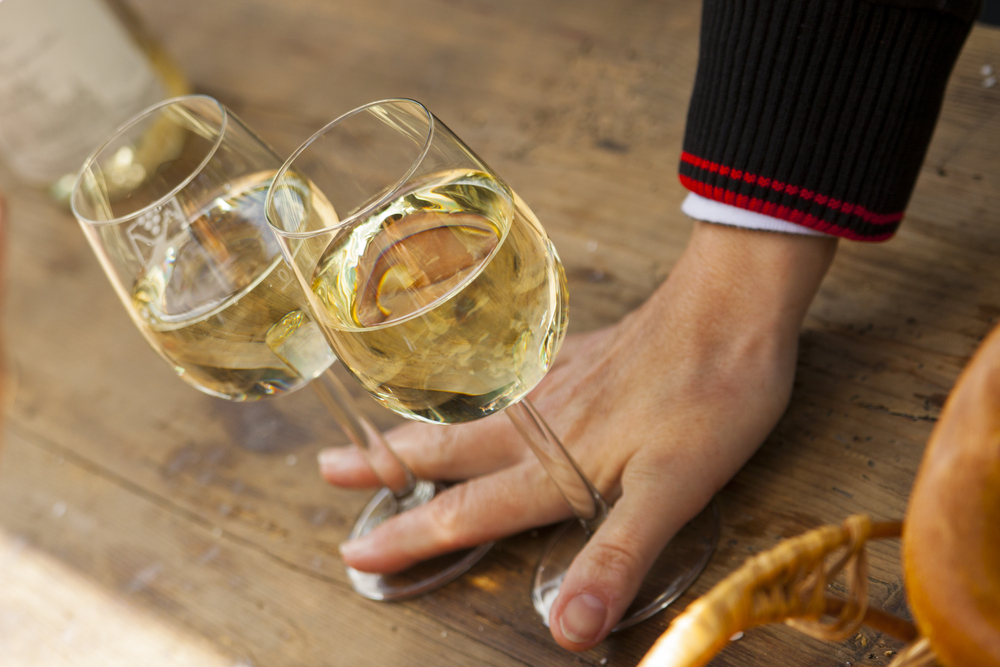 Mainz sits at the heart of the wine-producing region of Rheinhessen and the annual wine festival is held on the last weekend of August and the first weekend of September. You can sample all kinds of wine produced in the area and discover new ones, perhaps.

There are eight wine festivals in Mainz which start in March and continue until October when the Rheinhessen Wine Forum is held in Mainz’s Museum of Ancient Shipping.

The annual Christmas market is held from the end of November until the day before Christmas Eve. It is held in the main square under the shadow of the Dom. It is one of Germany’s biggest Christmas markets and if you live close to Mainz, don’t miss it.

The Collection Box and Confessional are taverns in the old town, where visitors can join the friendly locals in a glass or two of the locally produced wine. In fact you can have a glass or two virtually anywhere in Mainz. Ask for a Schoppen which is a 1/4-liter jug of the wine.

Am Holztor is a small cosy restaurant situated at Holzstr. 40. It is noted for its friendly service and excellent German cuisine. Fresh local produce is used to make the dishes served. 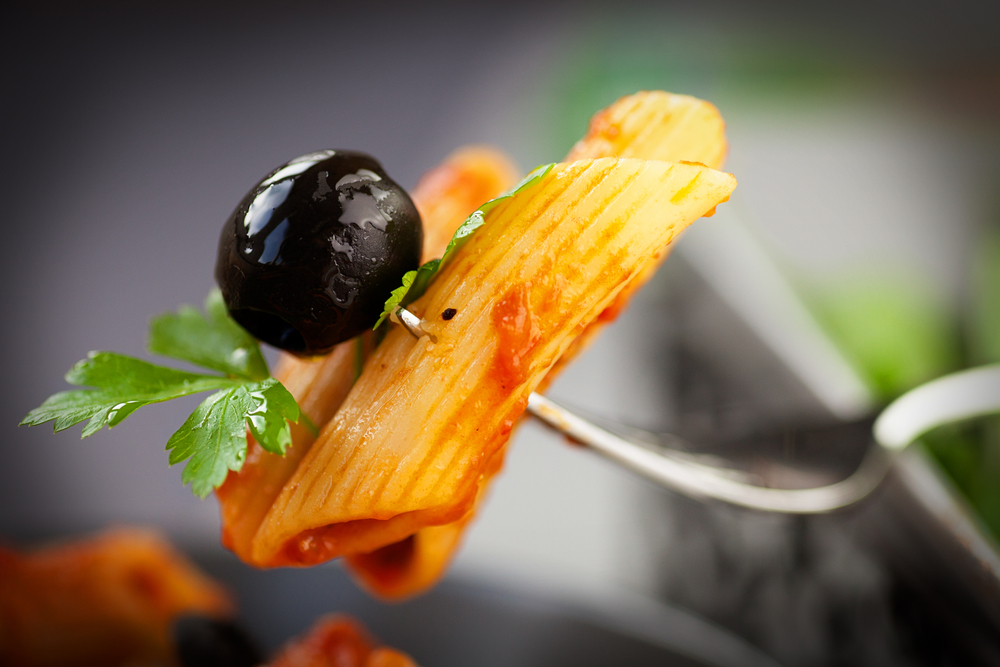 If you’d like a change from German food, try the Italian fare at Il Mondo, located at Kurmainz strasse 24. It is a twenty-minute bus ride from the central bus station but the authentic Italian food is worth the effort! Before you leave, have a limoncello to complement the truly amazing food.

This restaurant is near the river at Malakoff-Terrasse 1, in the Hyatt Hotel; however, it is not open all day, so check the opening times. The food is European and absolutely delightful. It’s extremely convenient if you are staying at the Hyatt!