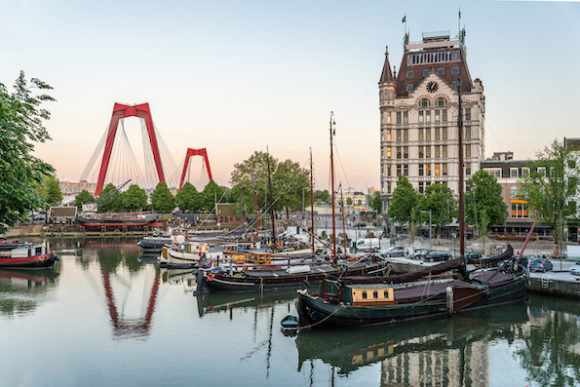 Rotterdam: One of Europe’s brilliant cities

A city of art and architecture, Rotterdam is the Netherlands’ second city. And it’s brilliant. Restaurants, bars, and cafes can be found along pedestrian plazas and in unique pockets of the city. Rotterdam offers great public transport, friendly locals, and easy walks. These elements make it easy to relax and enjoy the serendipitous moments that come with wandering the streets.

Rotterdam rocks when it comes to architecture. Let’s begin with one of the city’s famous yellow Cube Houses. Once you step inside, it’s like stepping into a rocket ship. Odd angles surround you. Open space soars upward and outward. And the views are incredible. 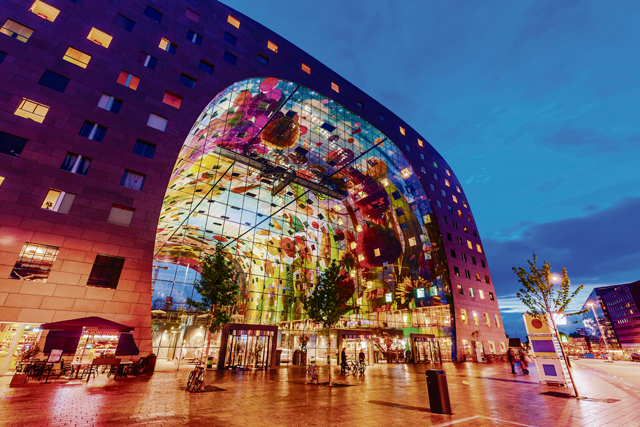 Modern market hall in Rotterdam at night. It was opened Oct 1, 2014 by Queen Maxima.

The Cube Houses, which were designed and built in the 1970s to resemble an avant garde urban forest, are just one of the fantastic architectural elements that define Rotterdam. The city is home to the Netherlands’ second largest population, Europe’s busiest port, and is arguably one of the most interesting cities on the continent.

Beautiful bridges, including the blazing red Willems bridge and the white swan-shaped Erasmus bridge, span the Maas River and are wonderfully illuminated at night. Skyscrapers jut upward at odd angles and give the city’s skyline an eclectic character.

The famous Markthall – which lies directly across from the Cube Houses, is a massive glass and steel rainbow-shaped wonder that contains a variety of shops, eateries, and kiosks. Visitors can find art etched into buildings, sketched on murals, tattooed onto locals, and hanging from shopfronts and museums. Rotterdam is a feast for the soul. 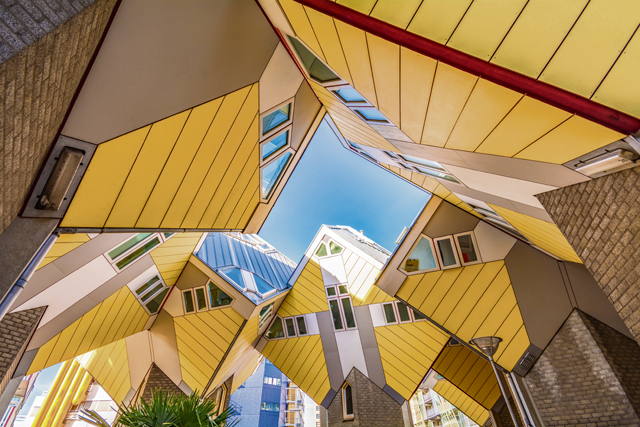 The Cube houses, “Kubuswoningen” in Dutch, are a set of innovative houses, designed by architect Piet Blom and built in Rotterdam.

The city is also, in many ways, a metaphor for rebirth. Rotterdam didn’t always look like this. Until the spring of 1940, in fact, it was much like any other northern European city, filled with brick buildings, tidy thoroughfares, narrow city streets, and bustling docks. But at the beginning of World War II, when the Dutch government didn’t surrender as quickly as invading German forces demanded, Rotterdam was made an example. The Luftwaffe bombed the city center into near nothingness. The Netherlands formally surrendered the next day.

After World War II, the people of Rotterdam had a blank slate with which to work. From this bleak beginning, they fashioned brilliance as the decades passed. The results today are remarkable: Rotterdam stands as a testament to diversity, creativity, diligence, energy, and possibility. 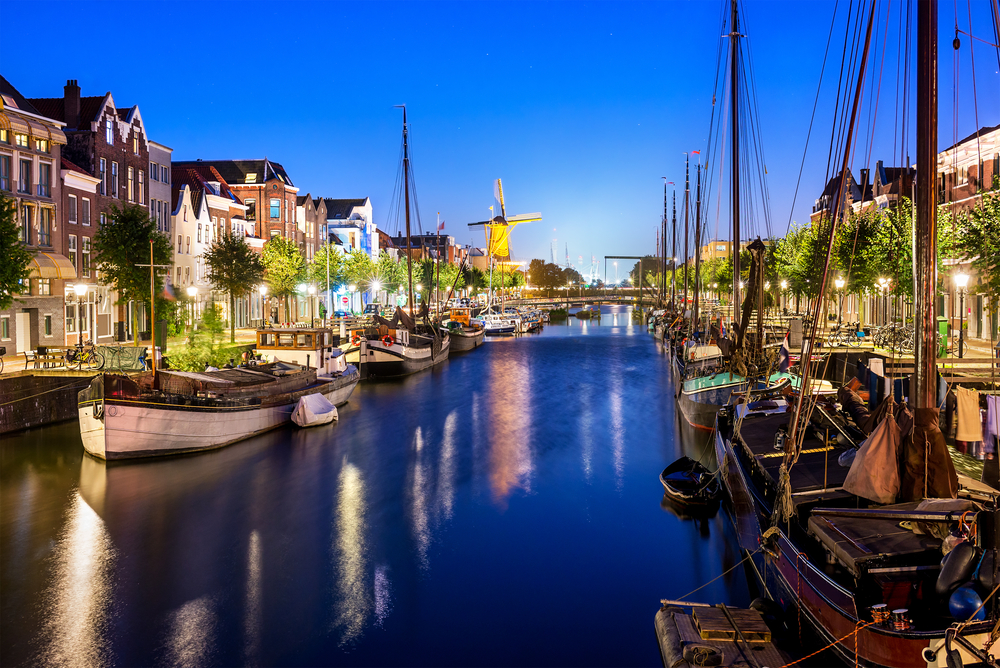 Picturesque Delfshaven in Rotterdam at Twilight. Its small historic center has been carefully preserved since it escaped the Second World War bombing raids.

So go to Rotterdam. Experience the energy yourself. Rent a room in one of the Cube houses. When night falls and you find yourself at the top of an angled roof overlooking a glittering city, you’ll feel as though you’ve just been launched into orbit, too. 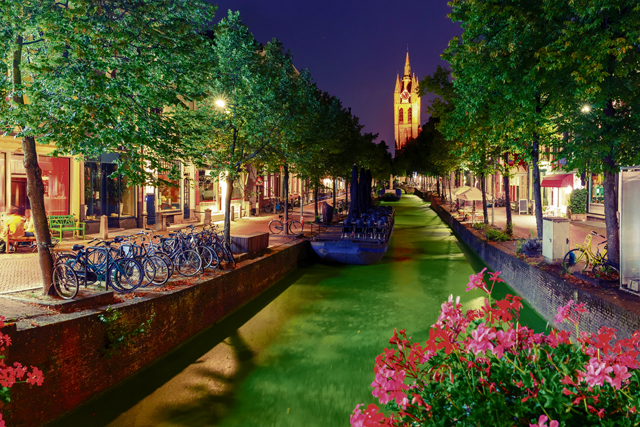 If you’re spending a few days in Rotterdam, consider a day trip to Delft. Home to Jan Vermeer, famous pottery, solid restaurants, and lovely canals, Delft is an archetypal classic Dutch village that serves as a fine stylistic and cultural contrast to Rotterdam. Plus, it is easily accessible by train from Rotterdam. Make sure you look out for local cyclists, though. They’re everywhere, and they’re faster than you think.

By car, Rotterdam is 5 hours from Kaiserslautern, 4.5 hours from Wiesbaden, and 7 hours from Stuttgart. For train options, check with Deutsche Bahn.