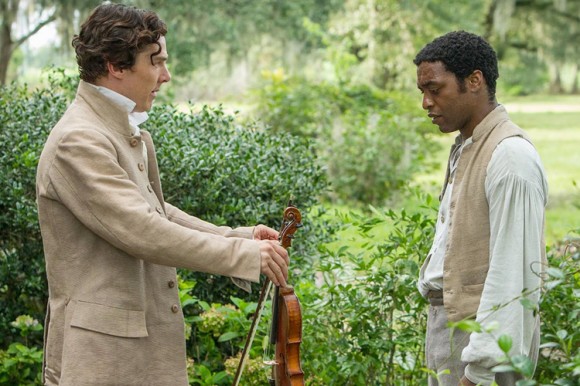 Northup (played by Chiwetel Ejiofor and nominated for the Academy Award Best Actor) was a free negro family man, a skilled carpenter, and an accomplished musician from upstate New York. In 1841 he was lured by a pair of phony businessmen to Washington D.C. with the promise of fast money in exchange for playing the violin. After being drugged, Solomon wakes up literally in chains. He is then kidnapped, sold into slavery, and shipped to Louisiana.

Solomon must be cunning and even calculating in order to survive the onslaught of brutality. He was stripped of his dignity, often brutally whipped, and subjected to becoming no more than livestock. This was a far cry from what he was accustomed to- respected by all, addressed as “Mr. Northup” even by white folk, dawned with fine clothes, and lived in a beautiful house. To literally save his own life as a slave, he had to craftily hide his very being as a learned man, someone who could read, and someone who was analytical- someone more than mere property.

Chiwetel Ejiofor is considered “one of the greatest actors of his generation”. His first Hollywood role came playing in Steven Spielberg’s Amistad at the age of nineteen. To bring depth or to define his role as Solomon, Ejiofor learned to play the violin, collected slave stories, and engaged in the physical labor that Northup did like picking cotton. His powerful performance in this film will take you with Solomon Northup on this journey of despair.

According to McQueen, he knew that Ejiofor was going to be Solomon Northup for him. “I was looking for someone that had that genteelness, that kind of humanity. Knowing that humanity was going to be tested under certain duress and circumstances, I needed a person who could actually keep hold of that, even through periods of extraordinary trying and extraordinary situations where it would be tested to its absolute limit. He was the only person.”

Just as superb as the actors’ performances in this riveting film, the screenwriter John Ridley (nominated for the Academy Award Best Adapted Screenplay) did an incredible job portraying the dynamics of the relationships among the characters. Additionally, it is just as enthralling how Ridley beautifully crafted the American language of the 19th century as the audience hung onto every word.

It is noteworthy to witness the entwined relationship between Northup (who was in bondage renamed “Platt”) and his first owner William Ford (Benedict Cumberbatch), a relatively benevolent master that eventually had to shelter him from death. In his 1853 memoir, Northup described Ford as “a kind, noble Christian man” who nonetheless “never doubted the moral right of one man holding another in subjection.”

Then there was the monstrous, alcoholic Edwin Epps (Michael Fassbender), Northup’s second plantation owner, who was known as someone that broke the spirit of his slaves. Believing it was his biblical right to abuse his slaves, Epps lashed out pure torment on Solomon and other slaves, and especially Patsy (Lupita Nyong’o and nominated for the Academy Award Best Supporting Actress). Patsy was a young female slave that Epps lavished and lustfully coveted. With the attention her husband paid to Patsy, Epps’s wife (Sarah Paulson) too hurled abuse on Patsy out of disdain. This also created an antagonistic relationship between the husband and wife.

12 Years A Slave will keep film watchers glued to the screen as it accurately represents this poignant part of Americana history with the vile sight and sound of enslavement. Never before has this stain of Americana history been portrayed in such a provocative way. Though not easy to watch, this film will drag the audience deeper into despair as he or she is able to see things through Solomon’s eyes. Never before has slavery been portrayed in such a heartrending way.