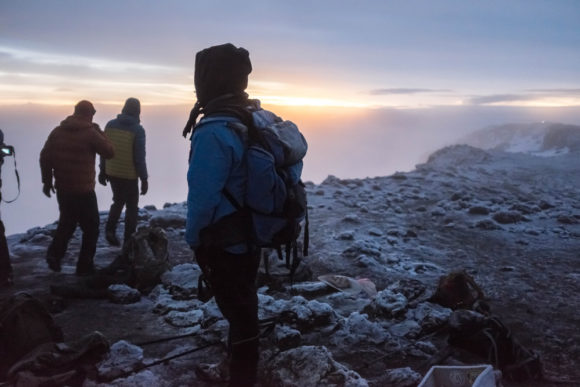 Need an Adventure? How About Kili?

“Time to get up,” was the soft but forceful sound my tent mate and I heard at 11:30 p.m. That’s right, 11:30 p.m. That was just six hours after being asked to go to our tents and rest. Now, at 15,200 feet above the Africa’s Great Rift Valley, it was time to rise, get our boots and warm clothes on, and start walking. Ahead of us lay upwards of twelve hours of putting one foot in front of the other, so this early start was necessary.
This trip through the frozen night on Africa’s highest mountain, the majestic Kilimanjaro was months in the making. Once the decision was made to take on “Kili,” it was time to notch up the training, acquire gear, and get high. Living at 7,000 feet above sea level, with access to peaks rising above 14,000 feet, made this easier for us than the low-landers on our team who hailed from Florida.
After months of preparation, it was time to test our resolve. “Pole, Pole,” the mantra of our Tanzanian guides, “slowly, slowly,” had been chanted to us from day one, which at this point was six days earlier. We started our trek at the Machame Gate, 5,900 feet up the world’s highest free-standing volcano.

From there, we followed what is popularly known as the Whiskey Route, named for its intoxicating views. On this journey, we crossed five vegetation zones while moving up 16,170 additional feet to the summit which rests at 19,340 feet.
Our summit bid was by no means a lonely affair. 35,000 climbers attempt to scale Kilimanjaro every year. According to RMI Expeditions (Rainier Mountaineering Inc.), only 45% of those who try reach the summit. Luckily for us, we purchased our trip through RMI because we knew we wanted to hike with world famous mountaineer, Dave Hahn.
Among his many climbing feats, Hahn has summited Mt. Everest fi fteen times – the world record for a non-Sherpa climber. Under his watchful eye, we learned to rest step and other secrets of the trade. Our local guides took expert care of us too. At Stella Point, they passed around hot mint tea and made sure we were warm in the well below freezing temps. On this particular night, I did not warm up.
The seven-day, thirty-four-mile trip was worth every ounce of effort. Woes about the lack of showers for seven days, the uncomfortably cold temperatures on summit day, and the headaches brought on by the altitude all faded from memory as the realization of our common accomplishment set in. The time spent with our Tanzanian guides, and staff, of which there were fi fty-four, made the trip unique and beautiful. At the end of our climb, they sang to us the melodic song of the journey to Uhuru, Kili’s summit, in their native Swahili.

Our trip didn’t end when the hike did. RMI expertly planned the next phase of the trip with local outfi tter Barking Zebra whose skillful guides drove us through two different national parks and the “eighth wonder of the world,” the Ngorongoro Crater, in search of Africa’s wild animals. From the safety of our safari vehicles, we saw lions, hippos, elephants, giraffes, zebras, and hyenas, just to name a few of the incredible animals. Nights were spent in luxurious lodges talking about our recent climb over expertly prepared local fare and tasty beer.
If this all sounds like the adventure you need, start hiking those high peaks, practicing the easily acquired Swahili language, and start looking forward to the trip of a lifetime.

Story and photos by Alexsis Blake