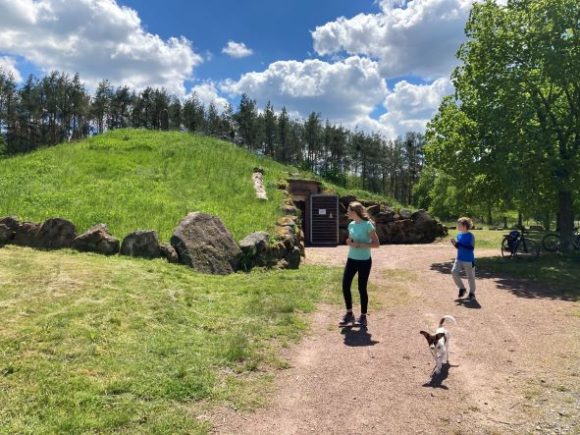 How the Celts Left Their Mark in Rodenbach

“Mom, is that a real body?” My daughter is looking through a long glass window into the side of a coffin-like space. Inside there is a very human-looking shape under a white burial shroud.

“Well, I don’t know,” I reply. “This is really a Celtic burial mound. Archaeologists found all those other things in the burial.” Beside the shroud are a collection of copper bowls and pots, an iron sword, and a glittery gold bracelet and ring.

“It says here he was a Celtic prince.” She is reading the informational sign, which is in both English and German.

“That would explain all the special stuff, and his huge burial mound.”

We are deep inside that actual mound just outside the village of Rodenbach. There are actually two burial mounds here and a ritual stone circle labeled as an ancient court. The largest of the mounds was excavated in 1874 and found to contain the remains of a Celtic man from before 400BC. 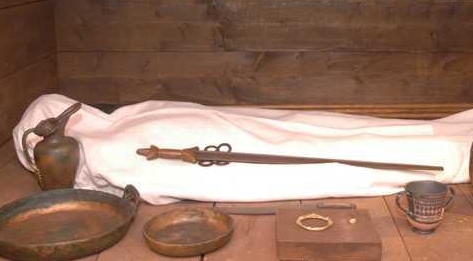 The Celts (Kelten in German) were a tribal people group that ranged throughout northern Europe in ancient times. Though they saw themselves as unique clans; modern archaeologists use the word Celts to refer to their shared lifestyle, culture, and language group.

The earliest known unified Celtic culture is called the Hallstatt culture. It is named for the archaeology dig in Hallstatt, Austria where the first iron age celtic site was unearthed. This culture group slowly brought the Iron Age to the rest of Europe over time between 1200 BCE to 450 BCE.

There are various theories about where this cultural change began, but the power was centered in the area of eastern Austria along the Danube. Tribes of the Hallstatt period controlled trade from Greece into northern Europe and between the river systems including the Danube, Rhine, and Seine. The Kaiserslautern region would’ve been on the western edge of later influence. 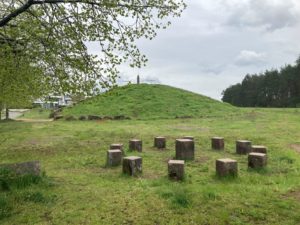 At another location near Rodenbach, there is a massive partially-reconstructed burial mound from the later Hallstatt time period. The excavation here in 1875 found iron sheets, bronze neck and arm rings, plus metal wagon bushings and wheel parts.

This grave is known as the Celtic Chariot Grave because of these findings. It is unique for the area, being so old and very large. There are signboards (in German) describing the grave, the excavation, and the late Celtic Hallstatt period in the Rhineland-Pfalz. Being partially reconstructed is helpful to visualize the size of the mound from the interior. 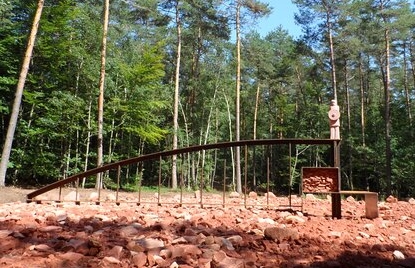 The Celtic Hallstatt culture slowly evolved into what archaeologists call the La Tène culture. Again, this cultural time period is named for the location where its unique artwork was first excavated in northeastern French-speaking Switzerland. Swirling circular leaf designs cover art from this time and give it a unique look.

The center of Celtic power shifted to Gaul: eastern France and Western Germany. Kaiserslautern was near the heart of this influential region that centered on trade along the Rhine. Note that the word Gaul was used by the Romans to refer to this people group in the same overarching way we use the word Celts.

La Tène Celtic culture slowly spread over much of Europe during the time from 450BCE to the Roman conquests around 1 BCE. This was the largest extent of Celtic culture – expanding into the far east of Romania and west into the British isles. 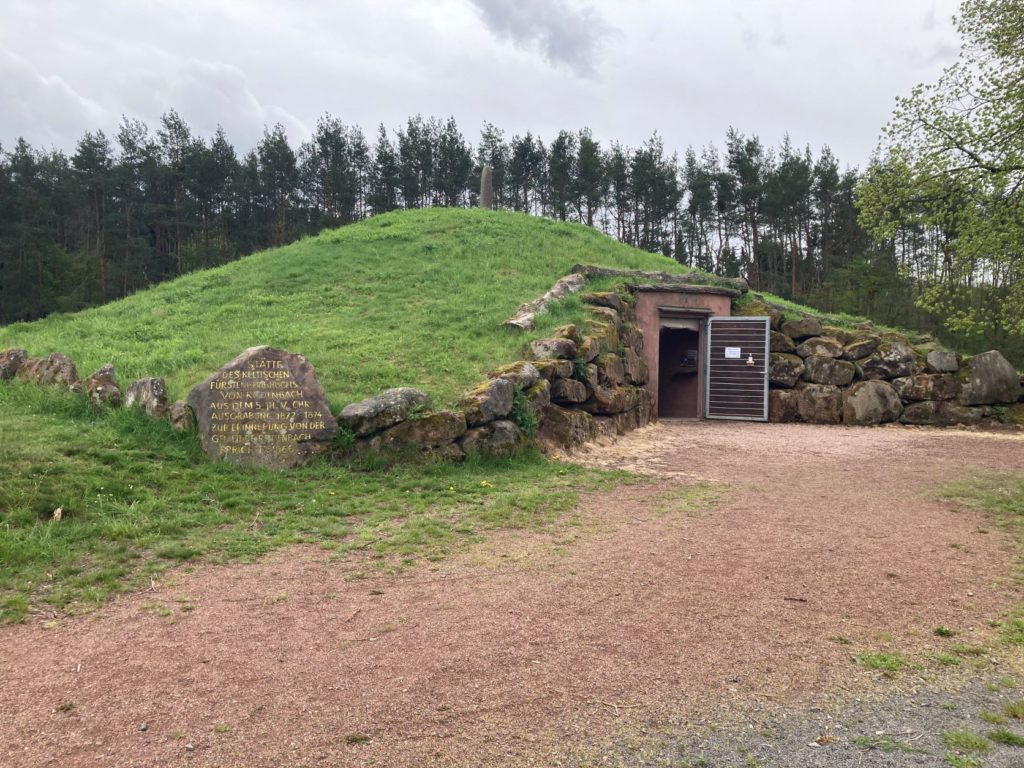 The Celtic Prince in Rodenbach

This is the time of our Celtic prince’s grave. There were Celtic settlements all over the Kaiserslautern area including two very large hilltop fortresses – in Donnersburg and Otzenhausen. Eventually, the Celts would either be pushed out of Europe or absorbed by the Romans. Celtic culture made its final stand in Britain.

In the Prince’s Grave Mound my daughter has finished reading the info board. “It’s a replica. The real items are at the Pfalz History Museum in Speyer,” she says.

The city of Rodenbach celebrated its 700 year anniversary in the year 2000 by reconstructing some of the Celtic sites in their area, including the Prince’s grave.

You can reach both the Prince’s grave and the Chariot Grave Mound walking from Rodenbach pool, which is a good place to park. Note that the Prince’s grave is accessible all year, but the interior is only open from April-October. For an active day out, both can also be reached via the Barbarossa Cycle Trail. 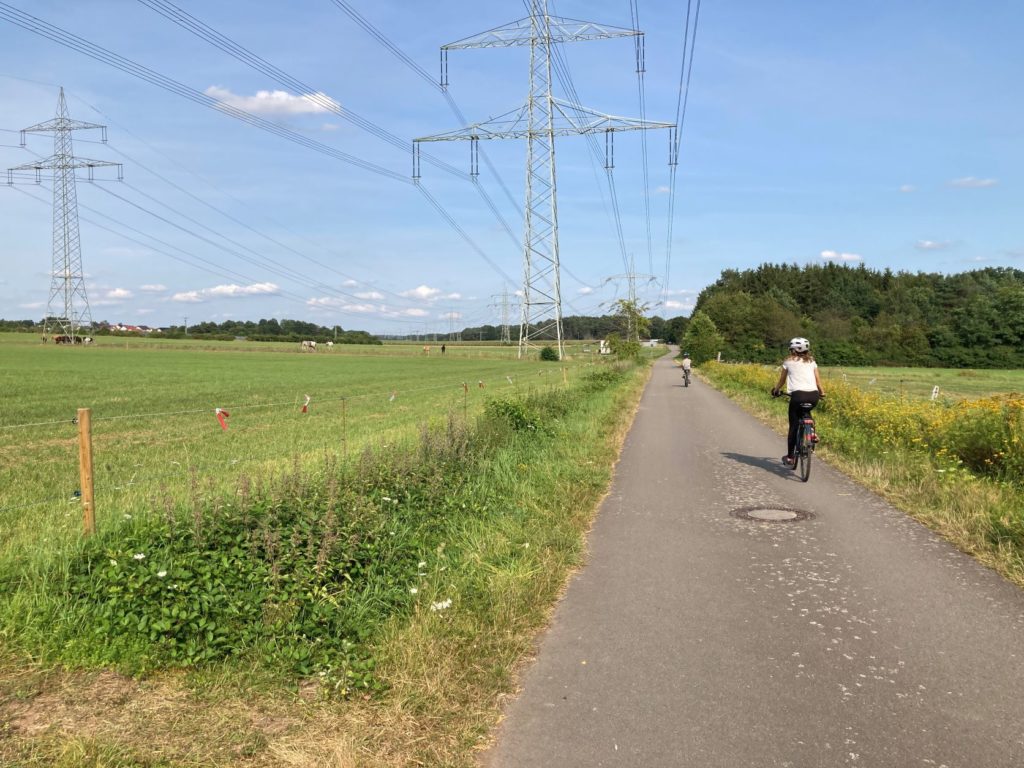