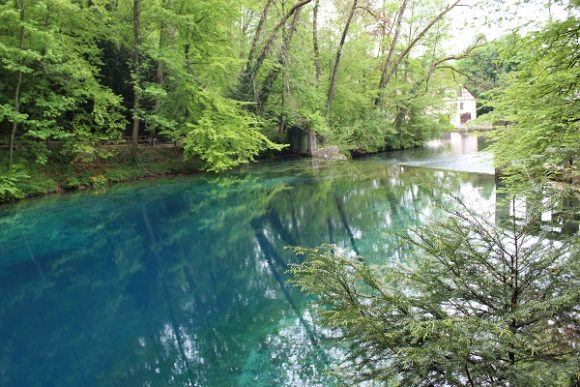 One of the biggest challenges of being stationed here in Germany is wanting to see everything. I find myself discovering something new every single week. One of the most talked about little towns in my neck of the woods is the town of Blaubeuren. Whether it was from being tempted to visit this lovely little town by seeing all the stunning pictures on social media or listening to all the chatter, I knew I had to discover this place for myself and share. 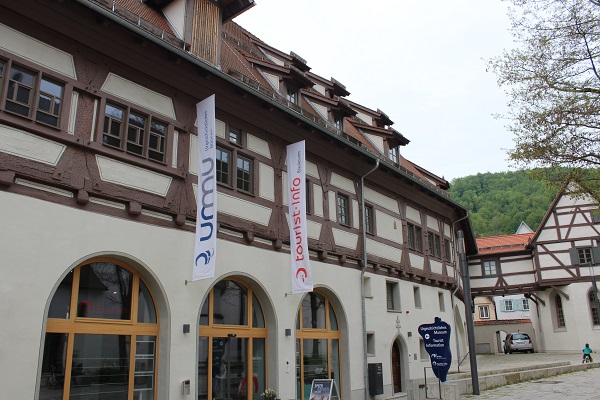 When I normally talk about historical towns in Germany they date back to the 1100’s or so, but in the case of Blaubeuren, it dates back much further. It dates back to something crazy, like 40,000 B.C., and I’m not even kidding.

We had such an amazing tour with our tour guide Gerta, who grew up in Blaubeuren and has seen many changes. We scheduled a tour through the tourism office for our group in English. You can organize tours through the Tourism Office of Blaubeuren. It’s very affordable for larger groups and well worth it. Click here for more information. 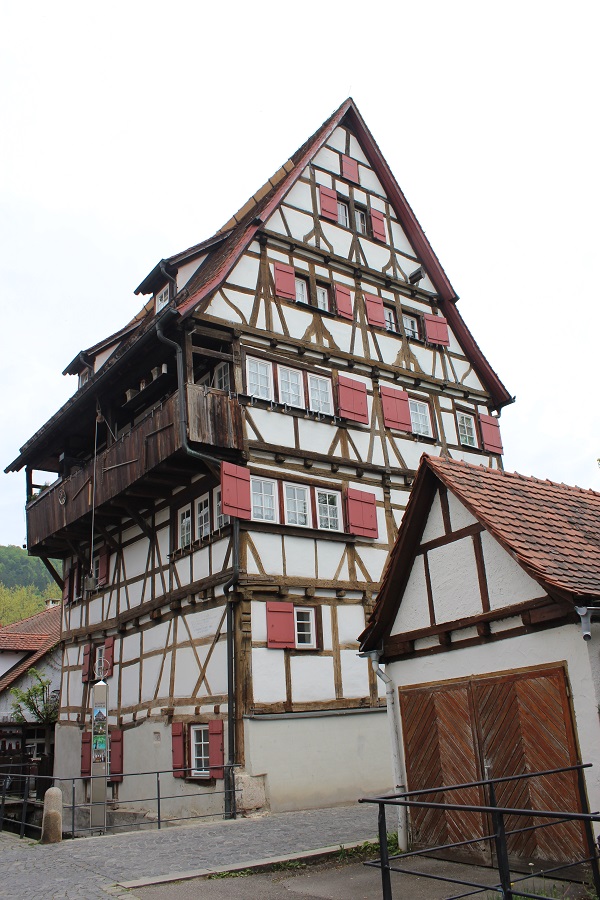 Beginning around the Paleolithic era, we first visited the Museum of Prehistory right inside the Tourism Office. This in-depth, interactive museum is great for families. We even saw “Mamma,” the oldest figurine of a woman in history. I would share a picture but it wasn’t allowed. However, you can see her on the website. 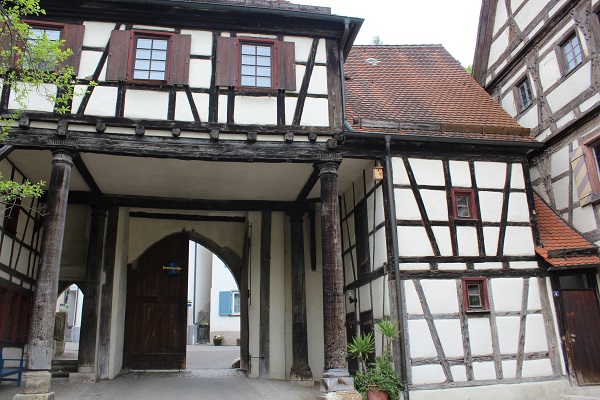 In 2008, while excavating and researching the caves around town, they discovered several tools, trinkets and flutes they believe date back to 30,000 to 40,000 B.C. They also created a display of what Blaubeuren might have looked like during this time as well. This was very interesting because there were several caves to provide shelter, rivers for water (Ach River) and flat fields for growing crops when it was spring and summer season. 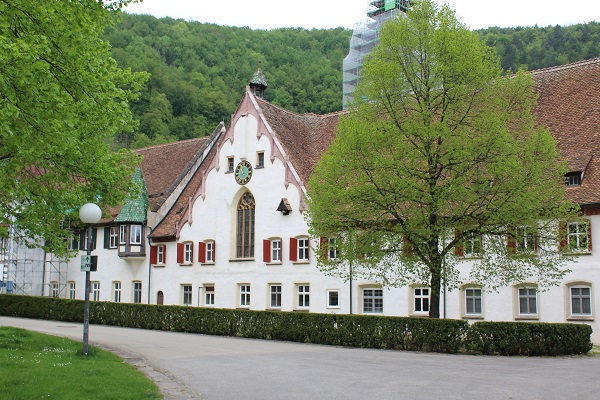 Fast forward to 1085; the first recordings were made by the monks of the town. Before the monastery, Blaubeuren did not really exist. Originally it was designed to be built in the Swabian Alb, but because of the presence of water and the ambitions of a trio of Counts (royalty), it was built in Blaubeuren. The monastery, which rose out of the Benedictine order, was very strict. I learned a lot about this religious order, who prayed eight times a day beginning at 4 a.m., practiced silence and memorized scripture. 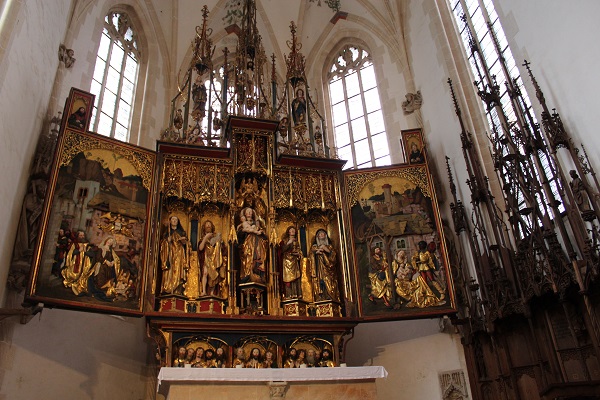 The high altar in the church, which was preserved even during reformation, is of particular interest because of its beauty by the first Protestant Abbott of Ulm. The church in the monastery was designed by the son of the artist who also designed the Ulm cathedral. I immediately recognized similarities in the pews and funny characters that line the dark wooden carved sculptures throughout the room. Although several figurines have been stolen, you can still see several funny characters throughout this prayer room. 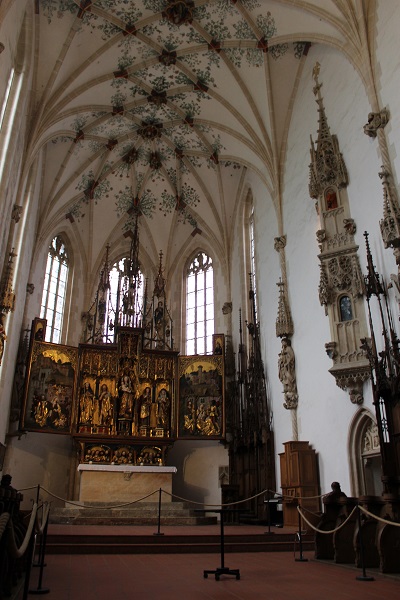 I asked the significance behind the characters, and Gerta said there was none. They had willing participants for models of course in which some were meant to be funny and some to be scary. Although people of the monastery had great faith, they still held onto some of the pagan beliefs. 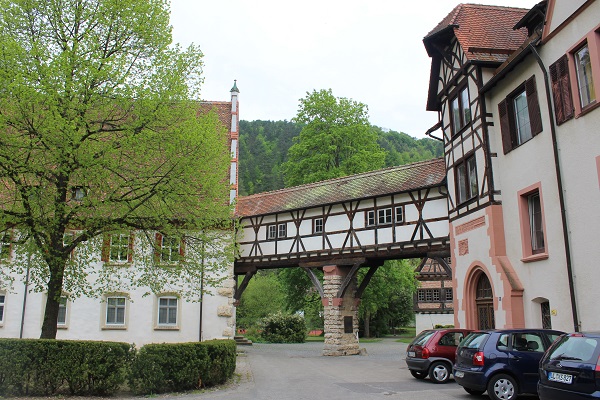 Also on the monastery grounds, there is a beautiful bath house still in tact that was used by the monks and the nobility for royal visits. This was a special treat. 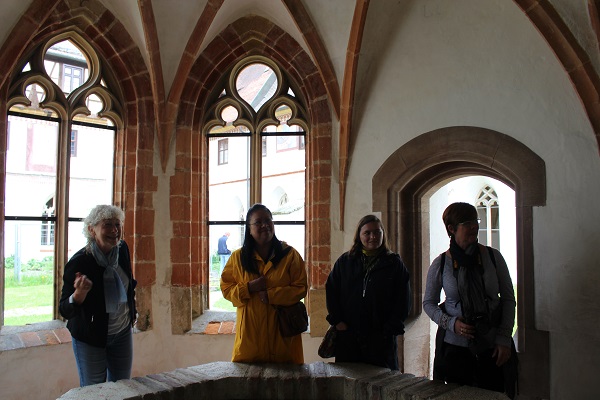 Throughout history it has been a boarding school and boy’s home. You will actually see graffiti from 1760. It made me laugh a little bit considering how I think that was just a phenomenon from the 20th century. 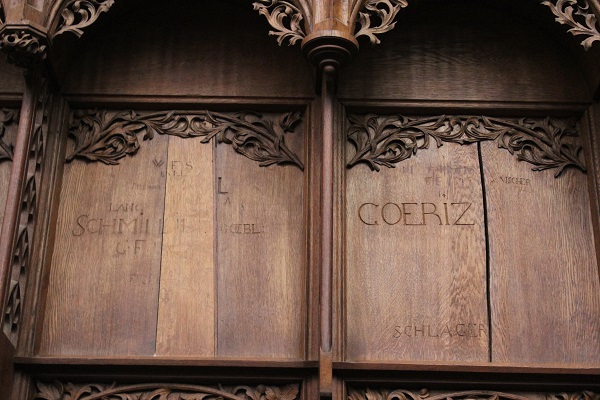 Today, the monastery is a private boarding school for theology for about 100 students. With only 15 teachers, this small school focuses on religious education. A picturesque campus with gardens, half-timbered houses and canals lining the streets, our walk through the grounds was gorgeous.

What’s Up With the Blue Waters? 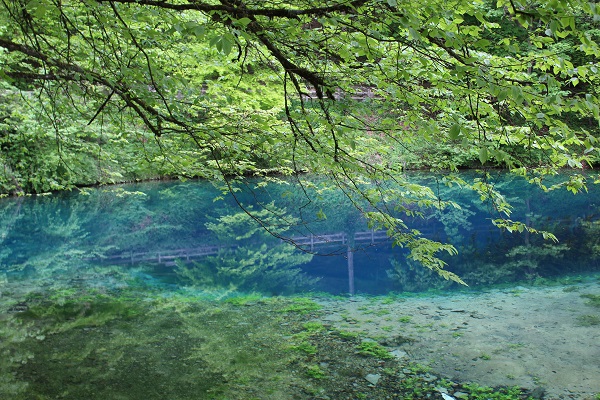 Booking.com
I love when people start discovering the waters of this city. Pictures taken of this area are breathtaking. Whether you are an amateur photographer or a seasoned one, the backdrop of these ancient blue waters is captivating.  In fact, all around Blaubeuren is quite magical.

We visited in spring, so the tourist season had not arrived quite yet. We were there on an overcast day in which our view of the waters was quite different from what it would be on a sunny day. Gerta explained that the reflection comes from the floating calcium carbonate particles and the limestone that washes down the mountain drains which are collected in underground streams that settle into a large pool. A 21 meter deep pool to be exact. 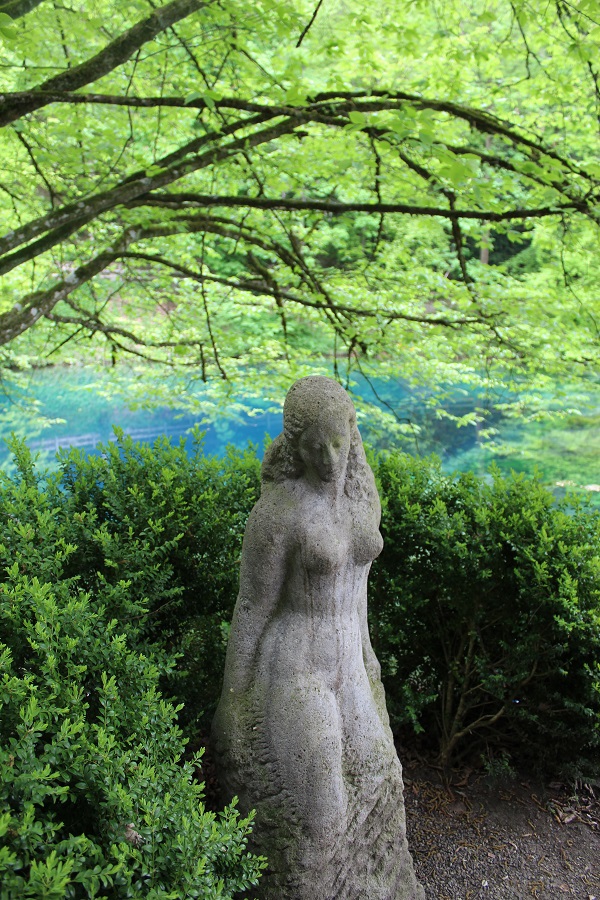 Catching a Bite to Eat 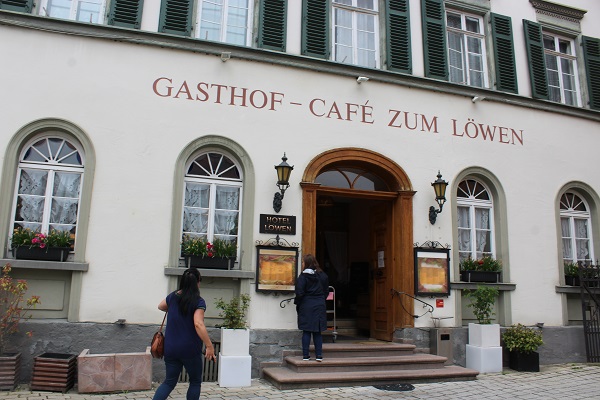 On most of my day trips, I planned to dine out. Usually I peruse the town website of social media for recommendations. However, when you have a guide as good as Gerta, you ask her where to eat. She sent us to Hotel Löwen where we enjoyed traditional Swabian dishes. 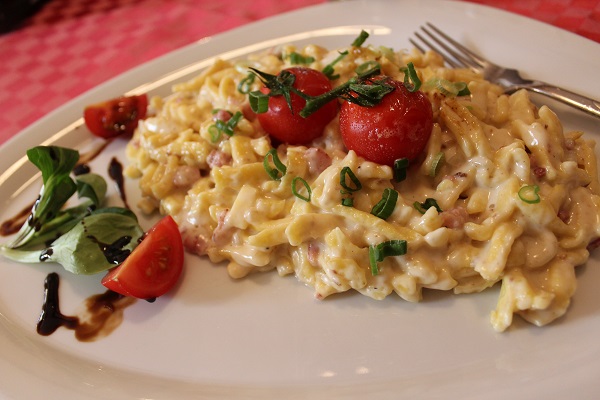 One of the town fountains is courtyard seating, making it very inviting. However, we visited on a chilly day, so we ate inside. The food was very good and affordable. I had a regional specialty, the Käsespätzle, (cheesy pasta dish) while my friends had Maültaschen (Ravioli pasta filled with vegetables and/or meat.)

One of the perks of our lunch was a salad bar. A new feature in some restaurants in Germany, it was nice to have this option since one of my friends (unbelieveably) does not like Kartoffelsalat (potato salad.) She was pleased to by-pass this and add other delights. 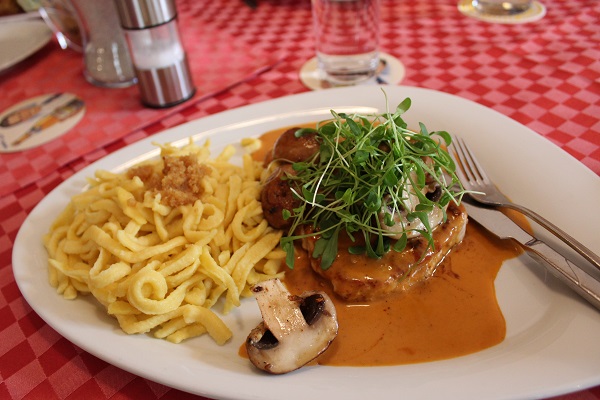 Remember, if there is something you don’t like in your dish that’s included, you can always say “kein” (no) and then research the unsavory item in Google Translator. For my husband and children, it’s “Pilze” or “Champignons” (mushrooms.) Most of the time, if you ask for your preference, it is not a problem. 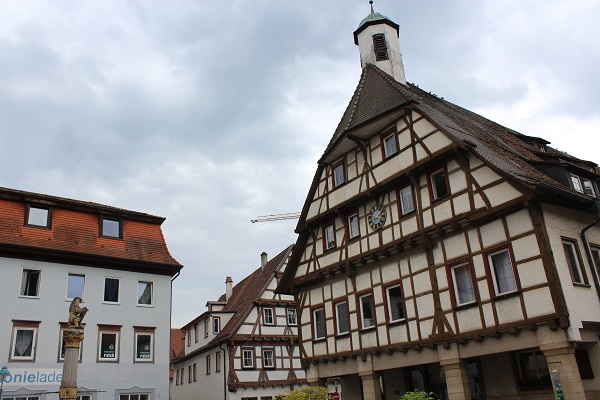 Blaubeuren is one of the cities I will visit again and probably take my extended family to this summer. It will be a delightful day trip, where we can see a microcosm of a genuine German town and get a little history lesson in also.

By car Blaubeuren is approximately 1 hour and 15 minutes northwest of Stuttgart, 3 hours and 15 minutes south of Wiesbaden and just under 3 hours southeast of Kaiserslautern. Click on DB Bahn for train details.