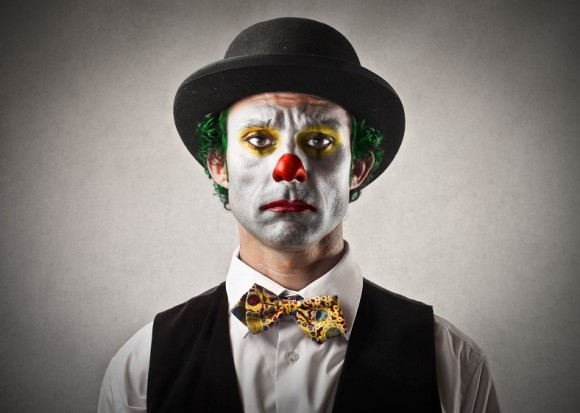 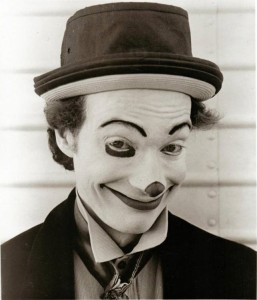 I grew up in the 1950’s, when the great clowns were still alive and stirring in the American psyche; Chaplin gave use his movie tribute to clowns, Limelight;  Buster Keaton was still actively pratfalling on live television; the Three Stooges were still cranking out their slapstick sonatas; and professional circus clowns were hilariously abundant, whether at Ringling Brothers or with the many Shrine circuses that crisscrossed the land.

As a child I reveled in their unprincipled and undignified shenanigans, and, by a series of fortuitous events, I actually grew up to become a clown with Ringling Brothers Circus, attending their prestigious (if that’s the right word for it!) Clown College in Venice, Florida, in 1971. In my professional career as a clown I would occasionally run across a child who was initially frightened by my grotesque makeup and costume, and I learned to approach such children very carefully and respectfully, telling them in a reassuring voice that it was okay to be shy, and asking their permission to come closer to shake their hand.  In most cases, after a few minutes of this strategy, the child would allow me to make contact, and I felt proud to have made a new friend for the art of clowning.

After many years in the business I changed careers, leaving my red nose and baggy pants behind.  I had been a respected member of a great fraternity of buffoons, and remembered fondly all the laughter and affection I had received from audiences all over the world.  Imagine my surprise and chagrin, then, when, just a few years ago, I briefly went back to my old trade – only to discover that nearly HALF of the people I interacted with said they were afraid of clowns, and wanted nothing to do with me! What in the world had happened to change people’s minds, I wondered.  I’m still not sure I have a complete answer to that vexing question. But I can make some reasonable surmises.

First of all, I blame the rise in amateur clown organizations across the country. Many circuses today have cut corners by not hiring professional clowns, but instead contacting local clown clubs to provide the comedy.  These amateur clowns often have terrible makeups and no training in physical comedy; when they approach the audience for some fun it’s no wonder the children, and maybe the adults, feel threatened, rather than amused!  I myself can recall as a child the amateur clowns that infested a local Fourth of July picnic I went to; how they tickled me until I wet myself.  Many of them reeked of whisky.  No child should ever be subjected to that kind of abusive clowning. Secondly, I blame the author Stephen King’s book It.  The book was published in 1986, and later made into a blockbuster horror film.  The book introduces the character of Pennywise the Clown, a shape-shifting monster that preys on children.  It is not a pleasant read, nor is it a pleasant movie to watch.

Since then there have been other “monster” clowns; in fact, if you Google “clown” under ‘images’ you will get mostly gruesome fiends in whiteface, not the funny fellows we all used to chuckle at.  One of the most popular costumes this coming Halloween, as it has been for the past fifteen years, is the monster clown outfit, complete with fanged mask and blood-soaked ruffles.
So, in a broader sense, I guess I’d better blame Hollywood and the whole entertainment industry for promoting and marketing scary clowns for profit.  Mere laughter is not enough – now our clowns have to be dangerous as well!  I do not think this bodes well for American society.

In Europe, Africa and Asia the clown is still a traditional figure of fun – allowed license to satirize the foibles and failings of kings and rulers, and of peasants and plebeians.  He, or she, is a gentle creature, full of music and whimsy, and children flock to circuses and shows featuring clowns, with complete trust and delight.  The way children used to here in the United States. But America has grown so cynical and sophisticated that we see nothing wrong with taking the innocent zany that gave us so much laughter and pleasure over the years and turning him into an icon of horror, like Dracula or Frankenstein’s Monster.  A pie in the face to all such demonizers of a great American comedy tradition!

Author profile:
Tim Torkildson is a former circus clown who also worked in radio news. He is currently providing web content for sites such as www.harcourthealth.com