Dolomites: Welcome To Your Italian Adventure

In northern Italy, where the massive Dolomite mountains dominate the land, you can find a different sort of country. This is adventure Italy. Adventure Italy gets your heart pumping.

For example, we asked a lifelong local to recommend a remote hike that was still reasonable enough for a family of five to conquer. He raised one eyebrow, said, “I know a place,” and sat down to scribble out directions.

An hour later, we were deep in the gorgeous peak-and-meadow terrain of the Trentino Alto-Adige Dolomites. Things were looking promising when we took a sharp right from a well-traveled highway after seeing a sign for our trailhead. It was only a few kilometers away. Easy, right?

Not exactly. The road to our trailhead could only be described as insane. After beginning with a narrow strip of concrete that looked as if it had been stapled on to the edge of an Ewok hut complex next to a rushing mountain stream, we entered a series of hallucination-inducing lightless tunnels. These were followed by multiple single-lane hairpin turns and blind curves squeezed between 10-foot-tall rock walls. 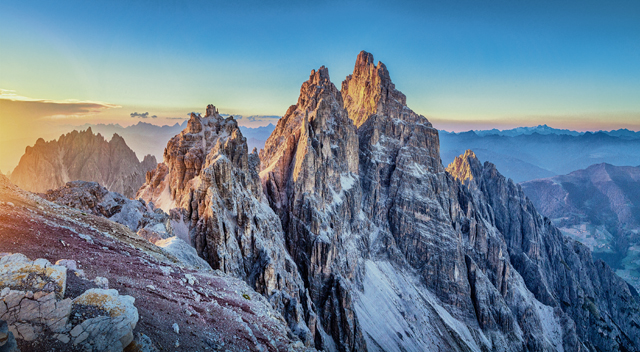 Panoramic view of the Dolomites mountain peaks during a summer sunset.

Then, somehow, the road got worse. The pavement crumbled and guardrails disappeared. Cliffs plunged three hundred feet straight down. Suddenly, on a road that was only slightly better than a semi-paved jeep trail, we came face-to face with a concrete truck. Judging from the lack of road concrete, the driver appeared simply to have been there for a joy ride.

When we finally parked, I took my shaking hands from the wheel and muttered to my wife, “I’d hate to see the road that isn’t safe for families to travel.”

Nevertheless, we were thrilled to be in the Dolomites, which contain some of the best hiking in the world. The views are astounding, especially in the Cortina d’Ampezzo region. There, the earth looks like nothing else, anywhere. Spires point like massive bony fingers toward unassailable blue sky. Immense rock fields stretch below chalky rust-streaked vertical cliffs. Green meadows shimmer on distant hillsides across sea-wide valleys.

Panoramic view of Cortina d’Ampezzo resort in the Dolomiti Alps.

And even though this may not be a land of famous art museums or idyllic Tuscan villas, the Dolomites are still in Italy, which means you’re never far from creature comforts. Energizing cuisine – including pizza and gelato – can be found in villages, along mountain roads, and in some of the larger cities like Feltre and Cortina. The southern end of the Dolomites are close to the world-famous Prosecco wine-growing region, where vines cover every inch of earth, including hilltops, in a way that is beautiful and unique.

Best of all, the Dolomites are vast enough that it is possible to find yourself alone, even in the summer. When this occurs, it is hard to describe how satisfying it feels to be a living creature on a mountain, just one small piece of a brilliant universe. It makes the journey, and all that it entails, worthwhile. 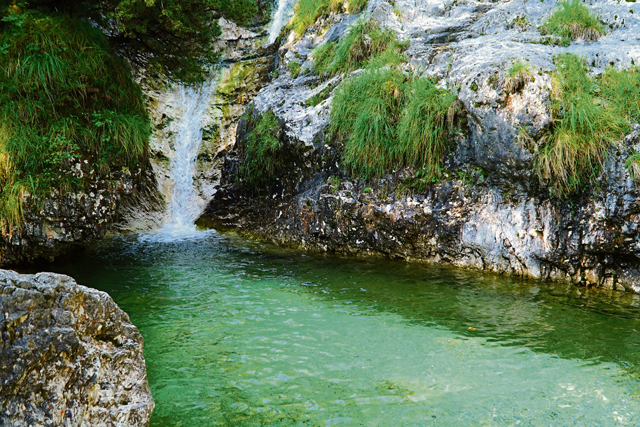 The Cadini del Brenton. Deep cavities dug by the waters of the stream forming small and clear waterfalls.

Hiking regions worth exploring
Brilliant summer hikes can be had throughout the Dolomites, which encompass a series of national parks and gorgeous mountainous terrain. You should definitely invest in a guide book, but here are two areas that provide can’t-miss beauty.

2. Bellunesi National Park, near the southern end of the Dolomites, offers rugged mountains, secret hikes, and plenty of streams, springs, and greenery.