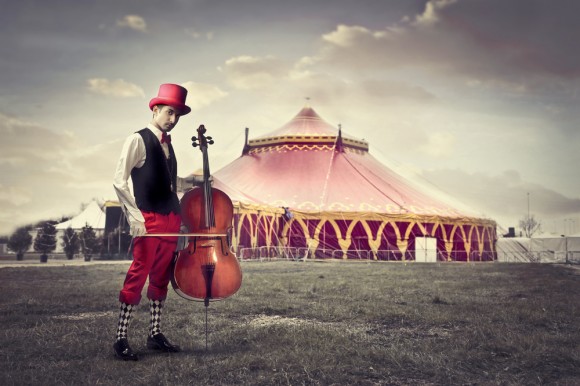 The Death of the Circus

The circus is not really dead. Shows such as Big Apple Circus and Cirque du Soliel are prospering, and breaking new ground with their innovative displays of traditional sawdust archetypes. But there is something that is part of the circus, the tradition and history and ambience of it, that has receded from us; and I don’t think it’s coming back.

This essay is inspired by my recent visit to the Jordan World Circus when it played in Orem, Utah. Three of my grandkids, with their fathers, came along with me. The grandkids were initially very excited, especially when I told them they would see the Wheel of Death and the Globe of Destiny. But by the time intermission rolled around they had dismissed the show from their agenda and wanted to get home to play games on their iPods. I tried to bribe them to stay with cotton candy, but I guess it wasn’t exotic enough – besides, they’ve all heard so much about the harmful effects of sugar from all the adults in their lives who are on special diets that they are getting a bit paranoid about the stuff, even though they love their sweets just as much as any other red-blooded, cavity-prone American child. And admittedly the intermission was interminable; it was obvious they were not going to start the show again until the last dollar had been squeezed out of the last $10.00 elephant ride. I almost got them to stay when I warned them they would be missing the Human Cannon Ball, but the call of Angry Birds was too strong, so we left halfway through the show. I think the one who most regretted leaving early was my son-in-law Jonny, who wriggled in his seat with unalloyed excitement during the Wheel of Death. Bless his soul!

But the crowd was small, and lots of other kids were begging their parents to go home, not just my grandkids. It was almost as if they had been dragged to an educational demonstration which was good for them, and desperately wanted to escape learning anything.

Land-o-Goshen, that’s the LAST thing a circus is supposed to be – educational! It’s supposed to be tawdry and smelly and hint at danger and faraway lands and forbidden follies. The clowns are supposed to outrage the adults and convulse the children. The Jordan World Circus clowns are talented and enthusiastic, but they are so doggone NICE. Maybe they have poetry in them, but it’s not even the veiled violence of a Mother Goose nursery rhyme.

For children today the circus is a mere historical curiosity, not a blood and thunder event that leaves them breathless and sleepless and addled for days or months or years. It’s about as narcotic as chamomile tea.

The personnel at the Jordan World Circus gave their all during the performance I saw, so I’m not willing to blame them for any of this tragic malaise I’m trying to nail down. Something has gone out of us, adults and children, that leaves us less than inspired by the hocus-pocus and lurid sights that once titillated our grandsires. We are no longer worthy of circus royalty, of such past nonpareils as Gunther Gebel-Williams or Lou Jacobs or petite May Wirth. If we saw them perform today we would not allow ourselves to wallow in their artistry, but would instead want to embalm them in a museum in order to show our respect for their talent.

The United States is becoming a land without circuses, and, as Mark Twain aptly put it more than a century ago, “When Congress is not in session I always attend the circus for scandal and amusement. Without a circus tent going up somewhere in this land, we’d become the most sour and mistrusted people on the face of the earth!”

Tim Torkildson is a former clown with Ringling Bros Circus and a former ESL teacher in Thailand. He currently runs the political blog http://iwritetheblogggs.wordpress.com/