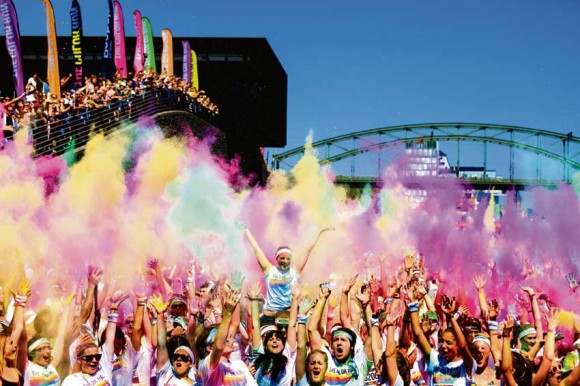 There is a new craze sweeping the running community, and it’s nothing to do with fashion or technology. Its all about getting… well, covered in paint! And it’s about to explode into Stuttgart later this month.

The Color Run, is also known as the Happiest 5k on the Planet, is a unique color race that celebrates healthiness, happiness, individuality, and giving back to the community. Less about getting a 10-minute-mile and more about having the time of your life, The Color Run is a five-kilometre, un-timed race in which thousands of participants are doused from head to toe in different colors at each kilometre. The fun continues at the finish line with a gigantic “Color Festival,” using more colored powder to create happiness and lasting memories, not to mention millions of vivid color combinations.

According to the organisers, this is the best post-5k party on the planet! With only two rules:

But don’t worry, the colour is all 100% natural rice flour-based and will shake off by the end of the event – any left will just wash out in the shower/washing machine.

The Color Run is the single largest event series on the planet, and since it’s debut event in January of 2012 it has grown to over 100 events and over a million participants last year. 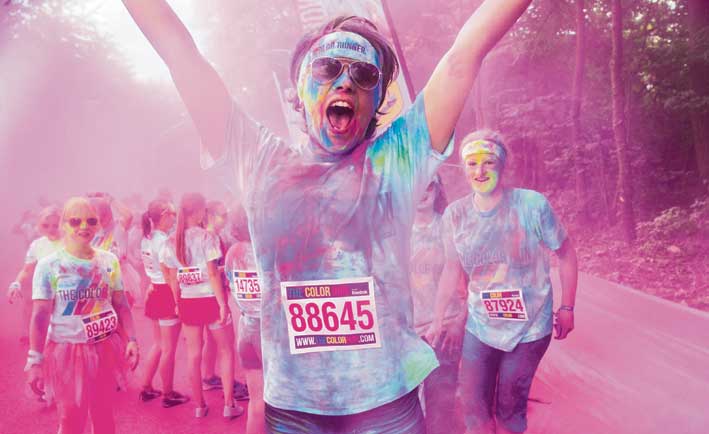 While The Color Run event is all about fun and positive energy, the 5k also focuses on promoting healthy living. Over 60% of Color Runners are first-time 5k runners and the event is making headway on the growing awareness of improving health and wellness.

In October, The Color Run event was featured on Nickelodeon’s Worldwide Day of Play, an initiative to motivate youth to get out and be active. The segment showed how kids celebrated around the country, featuring Nickelodeon stars and celebrities, including the First Lady. The Color Run event was a major highlight of the segment, and showed kids’ participation and thoughts on the 5k.
One child comments, “I play because it’s healthy and fun; especially when you’re running through color!”.
Another remarked, “I’ve never run before, but I’m excited about The Color Run because we get to get color splashed on us and its so much fun.” 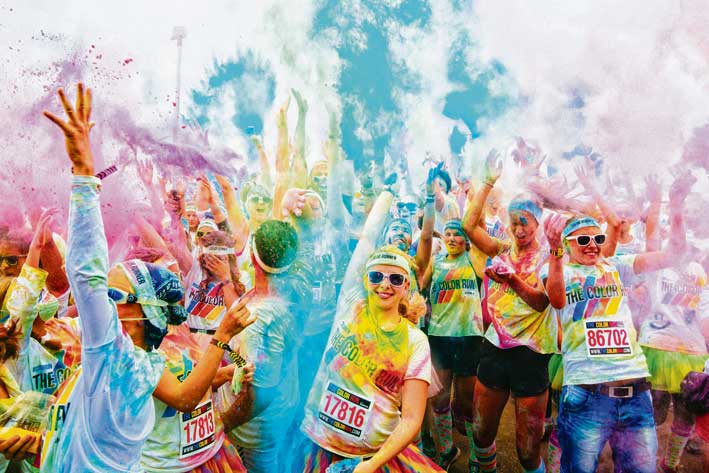 “We call The Color Run the ‘Happiest 5K on the Planet’ because our events bring together friends and family in a unique, healthy, and fun environment,” said Travis Snyder, founder of The Color Run. And after hundreds of thousands of participants have crossed the finish line – the name has stuck.

”“Color Runners” vary in demographics and reasons for running. With no winners or official times, The Color Run caters to anyone – 2 year olds to 80 year olds, first time runners to professional athletes. Over 60% of Color Runners are first-time 5k runners and participate as a celebration and milestone of their healthy living accomplishments. Others participate to honor loved ones who have passed or are fighting diseases. More run for love, and apparently The Color Run event has already sparked approximately 10 marriage proposals and one wedding!

So, whether you are a casual mall walker or an Olympic athlete, the 3 miles of The Color Run course will be the most memorable and colorful run of your life! 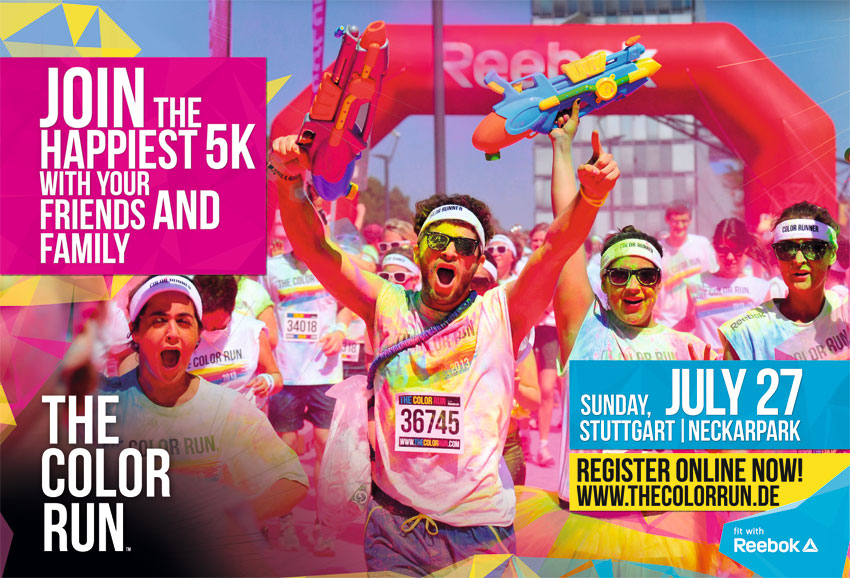 The very first Color Run in Stuttgart takes place on Sunday, July 27 in Stuttgart. This crazy run begins and ends in the Neckarpark area and passes the Mercedes-Benz Arena along the route.

There’s a start-line party, four colour zones and an after show party too. Expect it to be loud, colorful and above all fun. What are you waiting for?