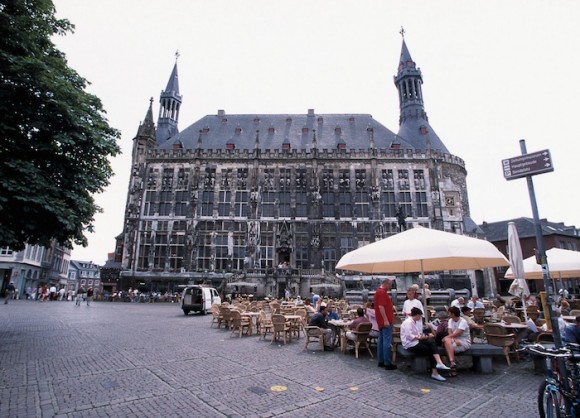 In association with Youth Hostels in Germany, we are putting together a range of German city guides designed to help you explore Germany as a family, on a budget. Our first guide is about the historical city of Aachen…

The German city of Aachen lives and breathes Europe. Located in North Rhine-Westphalia, Germany, this spa town borders Belgium and the Netherlands. While in Europe, a visit to Aachen would be a memorable one as it offers history, culture, a cosmopolitan flair and much more. The city has some beautiful historical sites to enjoy, whilst offering the vibe of a modern city. Nowadays the Youth Hostel in Aachen is a meeting point for young people from all over Europe.

Aachen is synonymous with Charlemagne who was also known as Charles the Great and the Father of Europe. Charlemagne reigned from 800 – 814. Known for his brutality, Charlemagne united most of Europe and created a period of relative order during the tumultuous times of the Middle Ages. He can be called the first Renaissance man as he encouraged art, culture and education. His efforts pulled the European continent out of cultural stagnation as well as his expansion of the number of schools improved the quality of education during his reign. Additionally, Charlemagne’s cultural revival and changes to the Church greatly influenced a push to create a unique civilization different from all other empires.

He died and was buried in Aachen 1.200 years ago this year, so 2014 is an important anniversary and a great time to visit Aachen. If history is your thing, then there are three large exhibitions taking place in Aachen this year dedicated to the culture and life of Charlemagne. Discover more here. 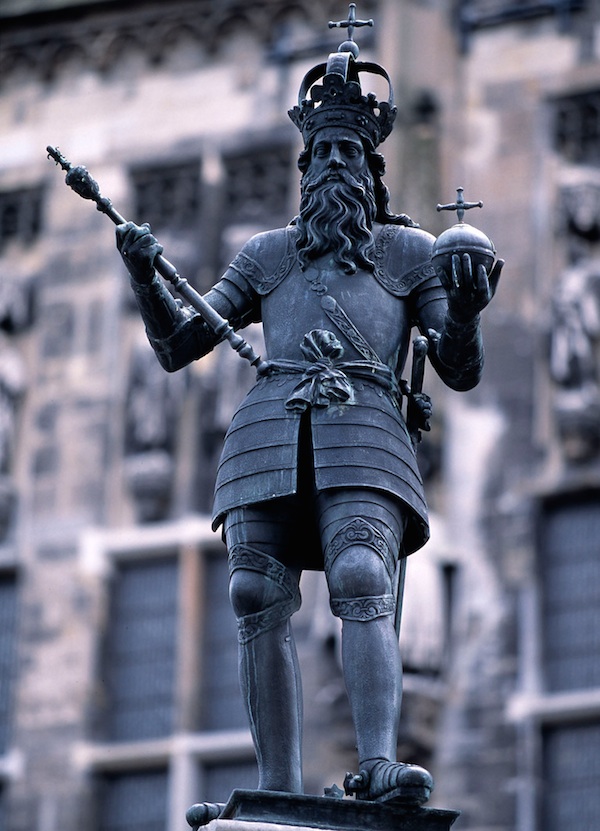 Aachen is also renowned for its relaxed atmosphere, best experienced on a stroll through the historical streets. There is a charming contrast between the grand old buildings scattered along the Charlemagne route and the lively buzz supplied by 45,000 students from all corners of the globe. This gives the city a vibrant yet laid-back character that everyone seems to enjoy wherever you look around. Evidence of Aachen’s cosmopolitan flair and a great reason to wander around or stop or enjoy a coffee, is the city center – the architecture of the historic buildings provides a mirror through the centuries. 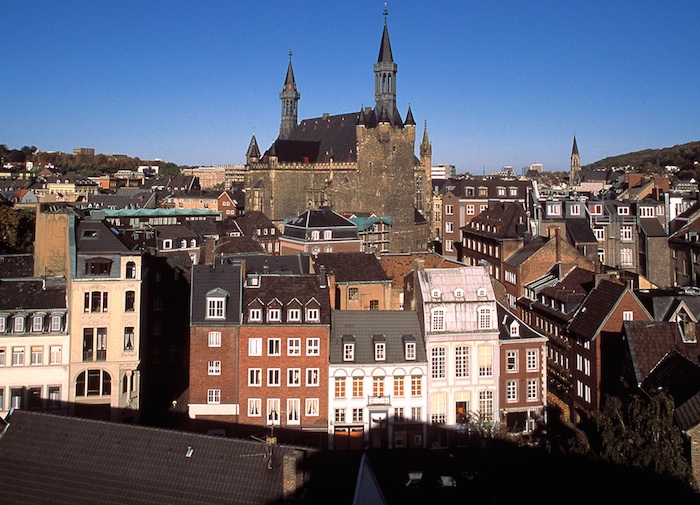 Aachen Town Hall, built on the site of the old imperial palace in the 14th century, is firm favorite with sightseers. It was converted into a grand baroque palace during the city’s prosperous heyday.

Important rooms that you will discover in the town hall are:

Inside the Grosses Haus – believed to be the oldest residential quarter in Aachen – you will find the International Newspaper Museum featuring many fascinating exhibits. The museum now explores the wider media. Its collection includes more than 200,000 newspapers and other printed matter from all over the world written in (almost) every language. This demonstrates the transience of history and how today’s headlines become tomorrow’s chip papers.

Whereas at the Ludwig Forum for International Art, the works on display are always contemporary, with genres ranging from pop art to photorealism. Throughout the ages, however, one thing has remained constant in Aachen: its European ethos. You cannot fail to notice that when arriving in Aachen, you are arriving in Europe.

Aachen Cathedral is both a local landmark and a monument to Europe’s illustrious past. The Cathedral began as the imperial palaces chapel in 800 AD (the year of Charlemagne’s coronation). Upon completion the building became the first cathedral in northern Europe. It served for many centuries as the church of coronation for nearly every German king.

The term ‘completion’ is open to interpretation. The cathedral has actually been extended numerous times, including an addition of the great chancel in 1414 – a Gothic masterpiece whose windows reach an impressive 27 metres in height, making them the tallest ever at that time. The cathedral’s treasury is the most important north of the Alps. It features precious artefacts such as the Cross of Lothair, a silver and gold bust of Charlemagne and the shrine in which Charlemagne was supposedly interred in 814 AD.

Aachen Cathedral was the very first site to be granted UNESCO world heritage status in Germany. This with good reason: built in around 790 to 800, the Cathedral is of world importance in terms of the history of art and architecture. It is one of the great examples of church architecture. As the final resting place of Charlemagne, it was also where German emperors were crowned for 600 years. This makes every visit to the former imperial city of Aachen a memorable one. 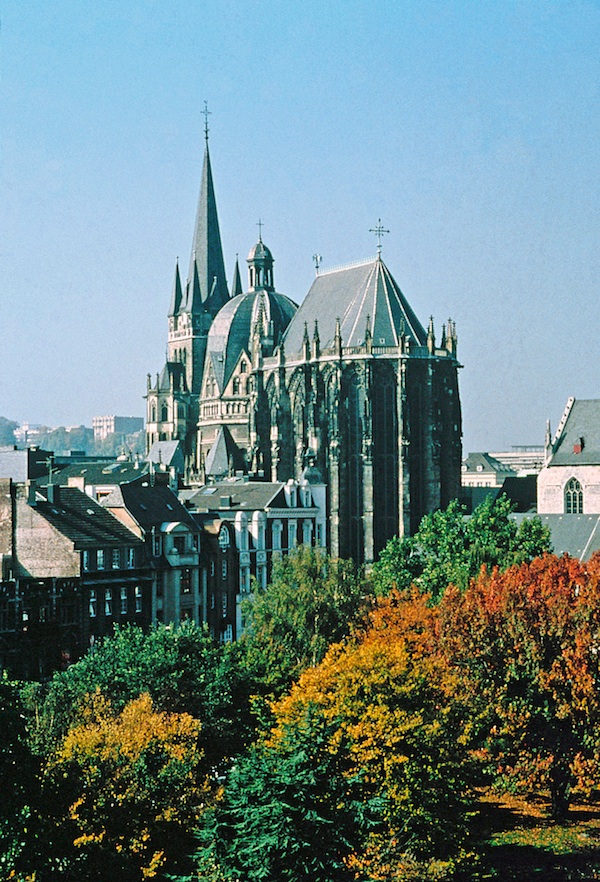 When you have finished sight-seeing, perhaps you would enjoy a more relaxing way to spend your time in Aachen. Famous for having the hottest springs in Western Europe, Aachen offers over 2000 years of spa traditions embodied in the modern yet traditionally constructed, Carolus Thermen.

Reaching Aachen is pretty simple from all U.S. bases so it’s an ideal weekend trip. To drive, it’s approx 2 hours 45 mins from Kaiserslautern, 2 hours 20 mins from Wiesbaden, and just under 4 hours from Stuttgart. It’s also possible to reach Aachen by rail using Deutsche Bahn – most trains change in Köln.

When visiting this historic city, a great and affordable place to stay for individuals (as well as families) is at the Youth Hostel Aachen. The price per night including breakfast starts at just €26,40. Serving as a meeting point for people from all over Europe, the hostel is a modern and attractive building located in a quiet area within a walking distance from the historic city center. In Aachen the hostel has 180 beds in 55 bedrooms with 18  rooms equipped with showers. There are also eight rooms suitable for wheelchair users.

The hostel’s onsite bistro offers a variety of meals including healthy and light meals as well as vegetarian dishes. Additionally, the bistro’s sun terrace is available for guests to unwind or meet others. The ten seminar rooms can serve as a great place to hold conferences, work on group projects or a place just to consolidate new friendships. Guests are able to play table tennis, volleyball, basketball and use the barbeque grill. There is also a family room with a play area.Cyclists are always welcome. The reception desk is open till 1am. 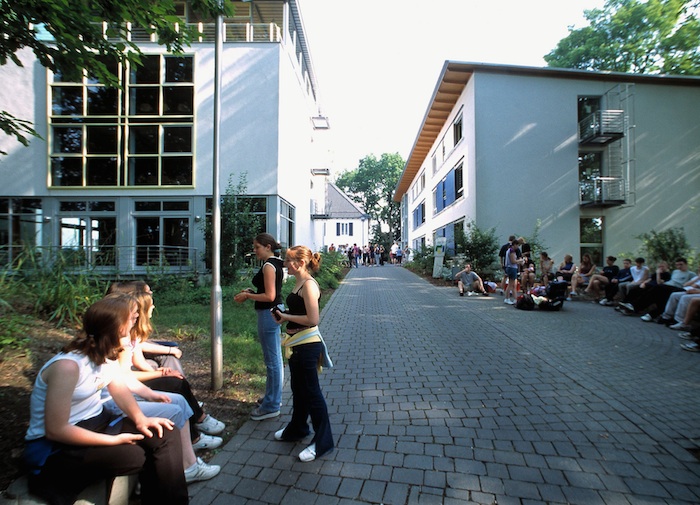 Culture and Heritage – Discover Germany on a Budget

More than 500 different Youth Hostels in Germany offer comfortable accommodations and state-of-the-art facilities, and each youth hostel also has a unique flair that will make your stay extra special.

Youth Hostels are the perfect place to soak up the culture and heritage of Germany. Families are very welcome and as Germany school children learn English from a young age – it’s a great way for your children to integrate with German kids to enhance their experience of living here. With playground and fun activities for the little ones as well as programmes designed for adults, the entire family will have a memorable holiday  at a very bargain price.