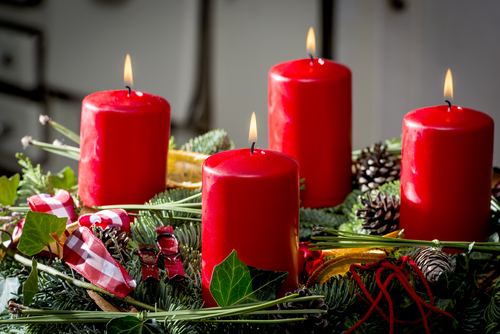 A Guide to the Christmas Season in Germany

Anyone who’s stood amidst the glow of a Weihnachtsmarkt or Christmas market knows that the holiday season in Germany is special. Sadly, Christmas markets will not be a part of this year’s holiday charm but there are still plenty of traditions to discover about Christmas in Germany.  While different regions may have their own customs, some traditions are observed countrywide.

Children have their own ritual with the observance of the Advent Calendar tradition that counts down the 24 days leading up to Christmas. Each day on the calendar has a little door or window that, when opened, reveals a treat (usually a chocolate, candy, or toy). However, for children in Germany, St. Nicholas Day is when they find out whether they were naughty or nice. On the evening of Dec. 5, German children put out their boots before bed. If they’ve been good, they wake to find that St. Nicholas has visited and with the help of his assistant, Knecht Ruprecht, placed small gifts and candy in their boots. In Bavaria, St. Nicholas and Ruprecht are accompanied by the Krampus, a horned creature who is there to punish the children who haven’t been so good.

The Advent wreath (see featured image) is important for many households because it serves as the main signal in the household that Christmas is coming. Tra­ditionally, the Christmas tree is not put up or displayed until Christmas Eve. After counting down the days during the Advent season, the tree becomes the centerpiece for the night. Together, fa­mi­lies decorate the tree and after dinner, the tree is lit and gifts are exchanged. The Christkind, or Christ child brings Christmas presents – not Santa Claus as it is in the United States. The way Christmas is celebrated in Germany mirrors the way many European countries (and former European colonies) celebrate this time of year.

In Germany, New Year’s Eve is called Silvester. Pope Sylvester I is reported to have died on 31 December 335. While the festivities feel the same as a New Year’s Eve celebration in the United States, in Germany, they are actually celebrating Saint Sylvester. At midnight, a great noise is heard through fireworks and church bells. This tradition, that noise helps ward off spirits, dates back to pre-medieval times.

In southern parts of Germany as number of days are celebrated called Rauhnaechte. This begins on Dec. 25 and marks the coming of Epiphany. Traditionally, a smudging, or burning of incense, is done daily during this twelve-day period. Farmers would burn incense throughout the house and stables to drive out the bad in anticipation of the New Year.

You might have noticed a series of letters and numerals written in chalk above front doors – this marking was left by Sternsinger or Star Singers. On Epiphany, children dressed up as the holy three kings, Caspar, Melchior and Balthasar, walk from door to door singing and collecting donations. In turn they bless the house with this code “20 C+M+B 19.” The first two and last two digits show the year of the blessing, i.e. 2020. The letters stand for “Christus mansionem benedicat,” which is Latin for “Christ bless this house.”