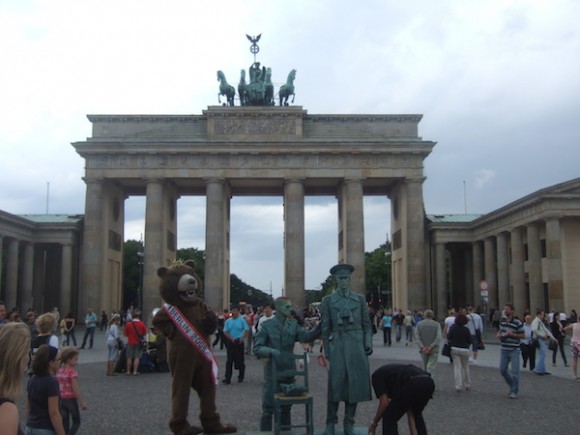 The murky brown waters of the River Rhine quickly blur with the passing green steel superstructure of the Hohenzollern Bridge as your train approaches Cologne’s central station. You might have caught a glimpse of the city’s old town straddling the river or the majestic cathedral just beyond it. With a screech of the brakes, the Intercity Express (ICE) grinds to a halt and you disembark onto a crowded, bustling platform.

Making your way through the throng of people, you descend the stairs and follow the signs for the exit. Making your way through the glass doors, you emerge onto a small square where you are presented with the most stunning sight imaginable – the 157-metre tall towers of Northern Europe’s largest Gothic cathedral, the Kölner Dom. It actually has the largest façade of any church in the world, a fact that often goes unnoticed.

Germany is home to countless magnificent sights, though perhaps not all are as well known as some of Europe’s other notable attractions, such as the Eiffel Tower in Paris, the Colosseum in Rome and Big Ben in London. Whilst UK, Italy and France are the top destinations for American tourists visiting Europe, Germany comes in at a very impressive fourth place in terms of overall popularity. So now you are living here in Germany, you should certainly make the most out of your tour and visit some of the top landmarks. 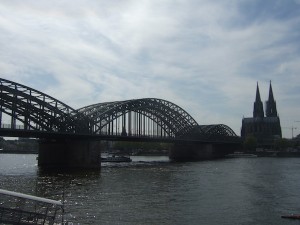 Cologne Cathedral (or the Kölner Dom in German) is truly spectacular. It all begins with that incredible view as tourists leave the central station. The cathedral towers overhead with its flying buttresses and pinnacles really catching the eye.

Construction work on the cathedral started in 1248 and it was finally completed in 1880. It has become Germany’s most popular landmark, attracting over 20,000 visitors each day. The people of Cologne are rightly proud of their stunning cathedral and it is used as a symbol for practically everything throughout the city, from Kölsch beer to the local football team.

The best time to visit is early in the morning, before the crowds arrive. It is possible to ascend the bell towers to a viewing platform 98 metres high. Be prepared though – you have to climb 509 stone steps on a narrow spiral staircase. The names and messages of countless lovers are etched into the stonework on either side of the steps and make for interesting reading during those long pauses to let descending visitors pass. It can get tight, especially when “larger” tourists squeeze through. Even though it can become tiring and irritating (especially when the volume of people on the stairs is high), it is all worth it for the amazing view over Cologne and the Rhine.

At first glance, the iconic Brandenburg Gate may seem distinctly underwhelming. Its size is not too impressive, especially when you compare it with similar landmarks such as the Arc de Triomphe in Paris. However, it remains highly notable due to its history, playing host to countless historic events.

The gate was completed in 1791, during the time of Friedrich Wilhelm II to represent peace. Napolean used it for a triumphant celebration in 1806 and Soviet soldiers danced in front of it at the end of the Second World War in 1945. 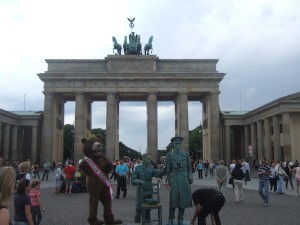 Badly damaged in the war, it was left isolated in the border zone between East and West Berlin. Even though both governments assisted in restoration efforts, the gate remained a symbol of division. It continued to play host to historical events including Reagan’s famous “tear down this wall” speech. The Brandenburg Gate finally became a symbol of freedom in 1989 when the Berlin Wall was systematically torn down all around it.

Traffic used to pass freely under the gate but these days, Pariser Platz, directly in front of it, has been turned into a pedestrian zone. There is always something going on in this atmospheric little square, from protests to concerts. It has to be your number destination on any trip to Berlin. Today the Brandenburg gate has been renovated even further and there is little trace of its turbulent past. 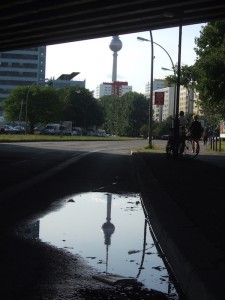 As you wander around central Berlin, enjoying its flea markets, museums and cafes, one landmark will never escape your view – the Fernsehturn or TV tower. Located near Alexanderplatz in the heart of old East Berlin, it was constructed between 1965 and 1969. Alongside the Brandenburg Gate, it remains one of Berlin’s key symbols.

It stands at 368 metres and makes a great orientation point if you get lost. It is possible to ascend the Fernsehturm for about €12 to a viewing platform and revolving restaurant (it rotates once every 30 minutes). As you gaze out over the sights of the German capital you will feel on top of the world.

The authorities in the German Democratic Republic constructed the Fernsehturm as a symbol of strength and determination. However, Berliners will always enjoy telling you an old joke about the tower’s major weakness. When sunlight reflects off the steel dome, it usually looks like a cross, a phenomenon later dubbed the “Pope’s Revenge”.

Ever present in the background of news reports dealing with Europe’s financial crisis, the Reichstag is another one of Germany’s notable historic landmarks. It achieved infamy in February 1933 when it caught fire in controversial circumstances, a pivotal event in the birth of Nazi Germany.

The Red Army made it their primary target during the Battle of Berlin in 1945 due to its historic significance and visitors can still see Soviet graffiti on the walls and roof. These days, the building has been thoroughly renovated and reconstructed to repair its immense war damage. 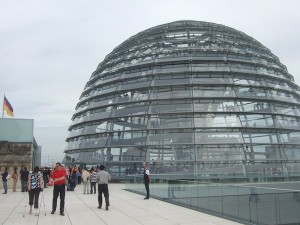 Architect Normal Foster led that project and it culminated with the installation of a massive glass cupola on the building’s roof. It has swiftly become the second most popular attraction in Germany, so visitors are best advised to arrive early. Lines can become quite long, an unpleasant experience during the warm summer months.   Once you enter the Reichstag (entry is free), you will ascend a circular walkway towards the top of the cupola. The views over the government district and the rest of Berlin are impressive and the experience is certainly worthwhile despite the long waiting times.

The Zeche Zollverein or Zollverein Industrial Complex is a UNESCO World Heritage Site in the West German city of Essen. For anybody with a keen interest in Europe’s industrial history, this is the best place to visit.

Coal mine and coking plant operations closed down in 1986 and 1993 respectively before the area became a monument in 2001. The entire facility is easily reachable by car and has its own regional train station. Prepare yourself for some serious walking – the Zeche Zollverein is a massive industrial maze filled with conveyer belts, copper-coloured winding towers and walkways. 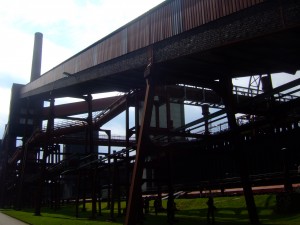 As you walk through the gritty abandoned buildings and railway tracks overgrown with weeds, you can’t help but wonder what this place must have looked like in its prime when over 7,000 workers extracted coal from the various shafts.  These days, the belching smokestacks stand idle and cafes have taken over the old workshops. Countless restaurants play host to hungry tourists and an outdoor swimming pool has been built in the midst of the machinery.

The complex really is a fitting monument to Germany’s coal miners who struggled with dreadful conditions in their dark subterranean world. Even though it is gritty and unglamorous, the Zeche Zollverein remains one of Germany’s most meaningful and important monuments, an enduring symbol of Europe’s industrial heritage.