Although Munich is most well-known as the home of Oktoberfest, there is so much more to this beautiful city and its incredible restaurants are one of its best draws. Choosing to visit Munich during the festival off-season will save you from fighting the huge crowds of tourists that descend during Oktoberfest, as well as make your visit less expensive.  Hotel rates increase dramatically during Oktoberfest, so plan your trip accordingly and enjoy these three great restaurants while you’re there!

The German name for Munich is “München” (pronounced MYOON- chin). With 1.6 million inhabitants, it is Germany’s third largest city. Like Texans, Bavarians are very proud of their state and consider themselves to be a unique part of Germany with its own sense of history and culture.

Munich is home to many great museums, art galleries and other attractions, but make sure you make time for a visit to at least one traditional Bavarian restaurant. Be prepared to be seated with the locals and get into animated but friendly conversations, because the Bavarians are, above all, noted for their outgoing and friendly manner.

Typically the meats and sausages are grilled on wood on an open fire. Bavarians are avid beer drinkers and you’ll find some of the world’s best beer right here in the city.

There are many great restaurants in Munich, and Mr. Gerhard Leicher, who is a consultant to the German restaurant industry and who has lived in Munich for over 20 years, shared his favorites with us. The following three are on Frauenplatz within 30 yards of each other.

This restaurant was originally built in 1893 but rebuilt after it was bombed during WWII. Click here to watch a little film about the restaurant (in German, but you will get a great look at the restaurant).

Preview the menu here www.bratwurst-gloeckl.de
Click on “Speisekarte” (meaning “Menu”) then click on the British flag for English 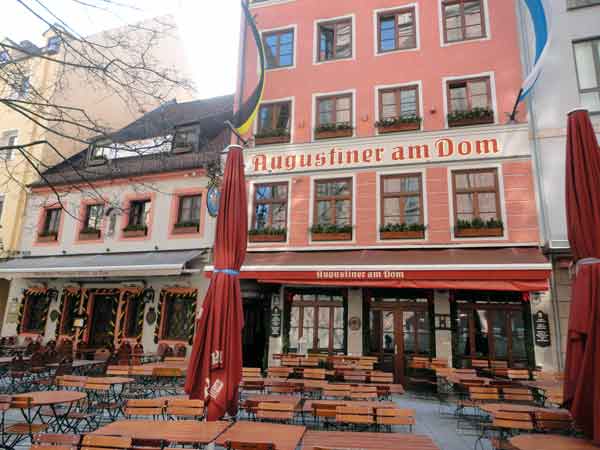 This restaurant is packed with locals, which is a great sign anywhere you find yourself in the world. The food is typically hearty and very Bavarian, and they have their own fresh beer.

Check out our videos of Munich