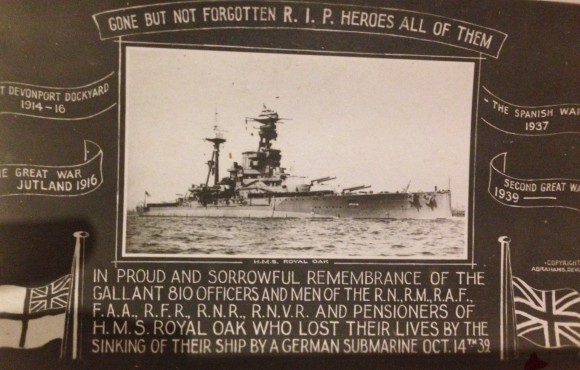 14th October, 2014 marked the 75th anniversary of the sinking of HMS Royal Oak in the waters of Scapa Flow in Kirkwall, Orkney, Scotland.

Kirkwall, Orkney has been intrinsically tied to the story of HMS Royal Oak since that fateful night and Orcadians have vowed never to forget it. So each year in Kirkwall this date is marked with a very significant memorial service where the 834 men and boys who lost their lives are honoured, allowing relatives and the ever-dwindling number of survivors the opportunity to pay their respects. 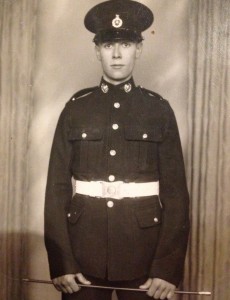 My Great-Grandfather was a Royal Marine on the ship, and survived. In fact he died just 12 years ago, the year I moved to Germany. So after many years of discussing attending the annual memorial service, my UK-based family and I decided to finally make the journey. The Orkney Isles are one of Scotland’s most northerly group of islands, and not the easiest of places to get to, especially when Germany is the starting point, but I’m very glad we did. What we experienced was a fantastic family holiday, a welcome like long-lost family, an incredibly moving memorial service, and some of the most beautiful scenery I have ever seen.

The Fate of HMS Royal Oak

Launched in 1914 and in service in 1916, HMS Royal Oak was a Revenge-Class battleship who saw service in the First World War, including the Battle of Jutland.

On the night of October 14, 1939, barely a month into World War II, she was anchored at Scapa Flow, when she was torpedoed three times by the German submarine U-47 and sunk within 25 minutes.

834 men and boys were killed that night or died later of their wounds. Less than 400 survived by either swimming nearly half a mile to shore, or were picked up from freezing cold, oil-slicked water by the tender Daisy 2. The skipper of Daisy 2, John Gatt, was later honoured with the Distinguished Service Cross for his remarkable efforts in saving so many.

The tragedy was especially poignant as many people had voiced concerns that the so-called ‘safe anchorage’ of Scapa Flow, was anything but safe. Plans were being put into place to barricade the main approaches, but it was too late for the Oak. The German Navy had now demonstrated it was capable of bringing the war to British home waters. The shock resulted in rapid changes to security and the construction of the Churchill Barriers around Scapa Flow.

The loss of the HMS Royal Oak and the majority of her crew had a considerable effect on wartime morale. Meanwhile, the U-boat commander, Günther Prien, became a war hero and the first German submarine officer to be awarded the Knight’s Cross of the Iron Cross, by Hitler himself.

The 75th Memorial Service began in the morning of the 14th on Scapa Flow beach, in the Garden of Remembrance. Alongside families of the lost crew and survivors stood many dignitaries and members of the Royal Navy – including the Northern Diving Group (custodians of the wreck) and the crew of HMS Bangor (a Sandown Class Minehunter) who had sailed into Orkney a few days earlier to attend.

When Agnes Millar welcomed us to the memorial service, she spoke with a voice full of emotion. After all, she is responsible for ensuring the souls of 834 are never forgotten. The annual memorials were started by her father, Charlie Millar, a hugely respected Orcadian and she promised to continue his legacy after his death in 2007. It’s an enormous burden that she has assumed, yet she treats the responsibility like an honour and the esteem in which she is held is clear to see by all who attend the event from near and far.

It was a beautiful and moving service and wreath laying ceremony, complete with Bag Pipes, a Royal Marine Bugler and an Honour Guard.

We were then all boarded on to the HMS Bangor and an additional boat and were taken out to the wreck site, which is marked by a single buoy – approx 1200 metres off-shore. Here the service continued and wreaths were laid in the water over the position of the 189 metre sunken ship.

It was incredibly moving and we felt very privileged to be part of it and touched that the Association continuously goes to such lengths to honour the tragedy in such a way. I feel sure my Great-Grandfather would have felt it a fitting tribute to his fallen comrades.

To view a short video on the 75th Anniversary, click here (opens in new window).

Custodians of the HMS Royal Oak 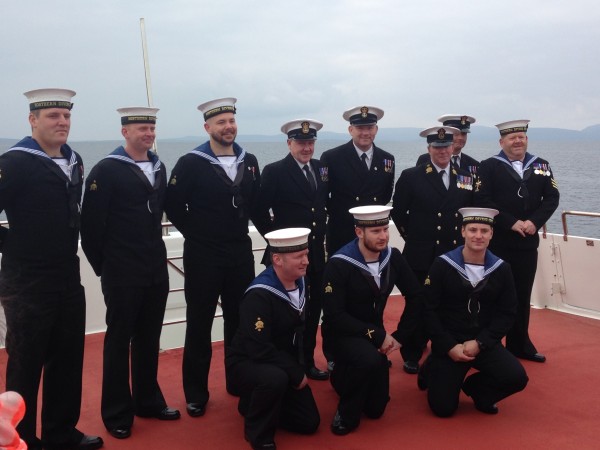 After the service we spent a lot of time talking to the Northern Diving Group, who become rather misty-eyed when discussing diving the wreck. It’s clear they have a huge amount of affection for her and continued sadness for so many losses of life.

From a professional diving perspective – the wreck of HMS Royal Oak is in excellent condition, thanks to the unique waters of Scapa Flow that have slowed the expected deterioration. It’s a privilege for any diver to see but prohibited to anyone outside of this small group of Navy divers and even this group, as professional as they are, do not enter inside of the ship. As a designated war grave the site is treated with reverence and respect – a majority of the 834 men and boys who died in the tragedy remain buried within her. The ensign is changed annually, the perimeter is surveyed and photographed, and rather poignantly, an underwater toast is given to the crew and then the Oak is left in peace in the waters of Scapa Flow for another year.

This year’s 75th memorial marked the end of the Royal Navy’s official support on such a large scale, the reality of this means most likely no war ships will attend the anniversary. All the members of the Northern Diving Group made it very clear that their work would continue each year and they would be in attendance.

A Token of Friendship 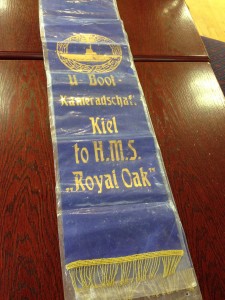 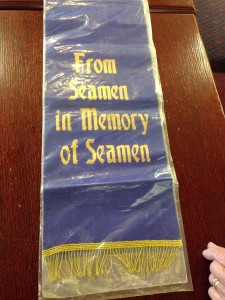 The highlight of the day was when Agnes showed a small group of us a very special items that she had kept hidden away for over 25 years. When her late father was the organiser of the Royal Oak Survivors Association, he was sent a scarf from the Submarine Association* in Kiel, Germany that had the following text printed onto it:

From Seamen in Memory of Seamen”

It was the first time she had ever brought it to the memorial; some of the survivors felt unable to accept the gift as the conciliatory gesture that we are sure it was intended. Agnes has respected their views without question because she feels only people that have lived through such an experience can truly appreciate the horrors of it and therefore must come to terms with it in their own way.

This year was the first time there were no survivors attending, so she felt it was finally appropriate to share it and we felt quite honoured. It is quite something to realise that fellow seamen, former enemies in combat or descendants thereof, had understood and acknowledged the events of the past and reached out a hand in friendship. 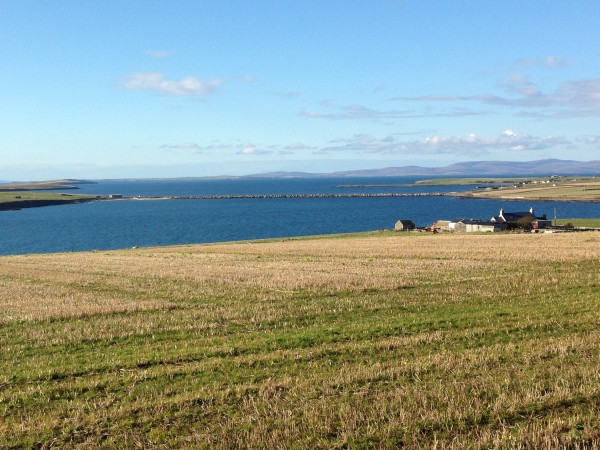 The day after the memorial it was time for us to move on and return home. It had been a pretty special experience to be amongst a group of people that share the same strong connection with HMS Royal Oak that we have felt our whole lives. It was like members of a family finding each other and sharing stories of our mutual history.

It was with a very heavy heart that headed towards the ferry, stopping off at a viewing point of Kirk Sound – the approach where U-47 entered Scapa Flow on that fateful night. So it was here that we bid our final farewell to HMS Royal Oak, Kirkwall and the Islands of Orkney, but we feel very sure that we will return. 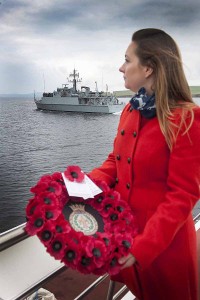 Michelle Purse is a Brit who has lived in Germany for the past 12 years. She writes frequently for www.MilitaryinGermany.com and enjoys helping newbie Americans learn to love getting off base and discovering more about Germany.