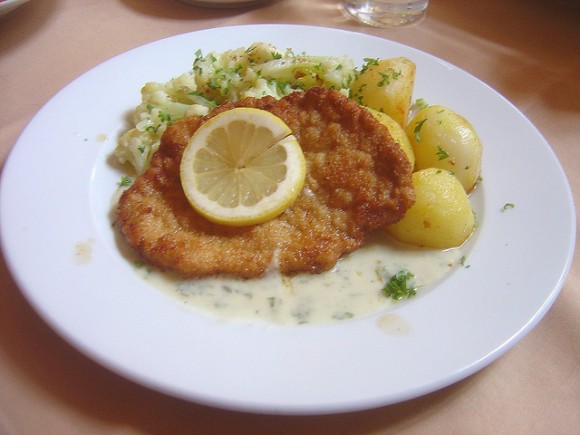 Being far from home can make you crave comfort foods more than ever. This leaves you torn between wanting to embrace and learn about a new culture, while still not wanting to replace everything that feels familiar to you.

When my Oma (the German word for grandmother) first came to America after marrying my grandfather, who had been stationed there with the army, I know she had a similar feeling. It can be even trickier when you’ve got little ones you aren’t too eager to try new foods. A great way to bring the two together is by trying out recipes for traditional German foods, that don’t differ too much from some American classics. Here’s two of my favourites:

Spätzle is a lot like a cross between small dumplings and pasta, which of course is very familiar! It involves a very simple-to-make dough. Even the ingredient list is short and easily recognized. It also can be made ahead of time, covered, and put away in the fridge for a day or so. There are even steps along the way that kids may find fun!

Serves approximately 4.
Some people like to substitute water for milk, and some add 1 teaspoon of nutmeg

1. Start by combining the flour, eggs, water, and salt to make a thick dough.

2. Bring 2 quarts of salted water to a boil, then reduce to a simmer.

3. Next, using a späeztle board, or any wide, flat surface, scrape small pieces of dough into the pot of water. You can make it easier to push off by first dipping the board or knife in the hot water.

4. In 2 or 3 minutes the dough will rise back up to the surface, which is how you know it is done.

5. Lastly, and this is the part kids can be tasked with, scoop up all the spätzle that has risen out of the water (most easily done with a slotted spoon).

In reference to step 2, instead of sliding the dough off a späetzle board, you can also push the dough into the water through a colander (or spätzle maker).

Another kind of classic German food that will look and taste familiar is Schnitzel (ok, technically its from Austria, but has been adopted as a German national dish for many years). Think of it as similar to chicken Parmesan or fried chicken. Usually made from veal (Wiener Schnitzel) or pork, plain and simple, it is boneless, flattened meat that is breaded and then fried. Once again, reality easy to make, without the need for a bunch of foreign sounding ingredients!

1. With a meat mallet or rolling pin, pound the pork chops until they are about 1/8 of an inch thick.

2. Set out three bowls. One with flour and salt. The second with egg and milk whisked together, and the third with bread crumbs.

3. Dip the cutlet into the flour, then the egg, and last the breadcrumbs.

Schnitzel is traditionally served with lemon and potato salad.

Author Profile:
Katherine is a regular contributor to FoodClassics.com and the granddaughter of one German grandparent, and one ex-military grandparent. She’s always eager to make and discover new German style recipes!