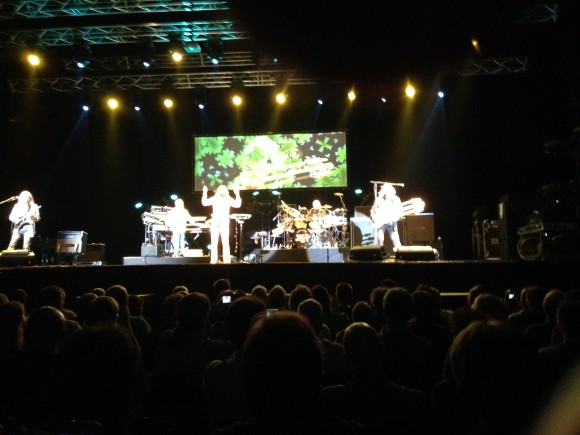 Enjoy Great Concerts at the Rockhal in Luxembourg

Located a few kilometers southwest of Luxembourg City, right on the border with France in the town of Esch-sur-Alzette, you’ll find Rockhal. Rockhal is a concert hall for world reknown bands and other performances that attract all age groups.

Most people correctly associate Luxembourg with world banking and war cemetaries/memorials. It is true that Luxembourg is the home of over 140 banks and some important cemetaries, but it is also a place to enjoy world class concerts.

The Rockhal concert hall is excellent. Since it was made for concerts, the acoustics are superb. All seats are the folding chair variety, but they are padded and very comfortable. When the concert lasts three hours, a nice, comfortable seat is a wonderful thing!

In German concert venues you often have no seating in front of the stage. This means you have to get there early and maneuver your way to a good spot to enjoy the show. But this is not the case at Rockhal! You can select and reserve your seat in advance using their English-language website.

What is also good about attending a concert at Rockhal is that there is a really nice mall right next door. It is recommended to get there a little early to take time to scope out the stores or have a quick meal before the show.

There are several parking garages to choose from, so parking is no problem. Just like in Germany, follow the big ‘P’ signs. You drive to the barrier, take the ticket, drive in, and park. Don’t forget to pay for your parking ticket at the ATM-like cash machine before you get in your car and drive off.

There are three official languages: French, German and Luxembourgish. The French language is dominant. The Luxembourgish language is really a derivative of the Franconian language formerly used in the Eifel (Mosel) region of Germany and is kind of a combination of German and Dutch. Don’t worry about this language since many people don’t even use it. Like everywhere, English is common.

Luxembourg is a part of the EU; they use the Euro.